Accessibility links
Why A 'Fiscal Cliff' Failure Could Help The Economy If President Obama and Congress can't make a deal this month, the economy could fall into recession while tax bills go up for nearly every American. On the other hand, it would do a lot to erase the nation's deficit.

It wouldn't be the worst thing that could happen to the country.

If President Obama and Congress can't come to agreement on new tax and spending policies by the end of year, the U.S. could slip into recession, defense and domestic programs will see damaging cuts, and the American people may become convinced that Washington can't govern the nation.

On the other hand, the lack of a deal would do a lot to help erase the federal deficit. 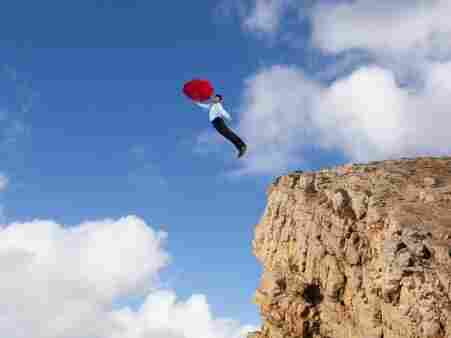 If President Obama and Congress fail to reach a deal on tax and spending changes, the nation would feel a lot of fiscal pain. But it also may benefit from the long-term fiscal restraint that would come from keeping tax hikes and spending cuts in place. Getty Creative Images hide caption

"I think it's kind of a neat idea that nobody's for," says Jared Bernstein, a former top economic adviser to Vice President Biden.

It's a messy way of dealing with the deficit, but the combination of automatic spending cuts and tax increases set to take effect at year's end, absent new legislation, would help balance the budget on both the revenue and spending sides.

Although the "fiscal cliff" could well lead to recession, it wouldn't have the deeper impact that runaway deficits could have down the road, which House Budget Committee Chairman Paul Ryan, R-Wis., and Erskine Bowles, the former co-chairman of Obama's deficit commission, have both called "the most predictable economic crisis" the country has ever faced.

"Perhaps America is on the brink of a fiscal opportunity," Jack Shakely wrote in a Los Angeles Times column on Wednesday.

There's no drumbeat to do nothing. The fact that Obama and his congressional interlocutors aren't anywhere near accord doesn't mean both sides don't want a deal. Too many unpopular policy choices would be made by default if they fail.

"I don't know that there's any policymaker saying that we should just let this happen and face the music and finally get on a different fiscal path," says Bernstein, who is now a senior fellow at the Center on Budget and Policy Priorities.

Even though fiscal discipline is sorely needed in an era of trillion-dollar annual deficits, the looming tax and spending changes represent too much change at once, Bernstein says. It's like knowing you have to lose weight, but instead of changing diet and exercise gradually, you simply starve yourself.

"That's a big objection to the fiscal cliff," says Alan Viard, a resident scholar at the American Enterprise Institute. "This would be a huge amount of austerity all at once, in an economy that's still weak."

It's increasingly hard to rule out the possibility that no deal will be struck in time to avert major changes in fiscal policy. Right now, Obama and Congress face the threat of bad things happening if they don't meet their Jan. 1 deadline for tax and spending changes.

But there will be even more pressure on Washington to do something if bad things really do happen. People could get angry when they see more taxes withheld from their paychecks. The broader economy could be affected quickly, particularly if markets panic.

Taking action after the fact could result in the worst of all possible worlds: the nation experiences short-term economic pain without any benefit from the long-term fiscal restraint that would come from keeping tax hikes and spending cuts in place.

"If we go over the fiscal cliff, I don't think anyone really believes we've settled our imbalances," says Steve Davis, deputy dean of the University of Chicago's Booth School of Business. "There are fundamental differences about the extent to which we should cut spending growth or tax burdens."

As Davis notes, there would be immediate discussion in the new year about which of the sudden tax hikes should be reversed. Leaders of both parties favor keeping rates where they currently stand for 98 percent of U.S. households.

And no economist seems to believe that Congress would leave in place changes in the alternative minimum tax or cuts in reimbursement rates to doctors under Medicare.

"Hitting a weak economy with this volume of tax increases and spending cuts all of a sudden is not the way to do it," Davis says.

Time For A Reckoning?

The reason so many fiscal chickens are coming home to roost at the same time is that lawmakers in Washington have consistently ducked the sort of painful choices the current debate is all about — balancing the budget by raising taxes or cutting spending, or some combination thereof.

Perhaps no one would have intentionally designed a fiscal austerity program this way (although the potential crisis is lawmakers' doing). Despite all the potential pain, there would still be only minor changes to entitlement programs, which are major drivers of future deficits.

Bernstein argues that there are "plausible and in some ways attractive" scenarios that could play out if there is no deal. Much of the economic damage caused by the sudden dose of austerity, he says, could be ameliorated by using some of the federal government's newfound revenues to pay for a stimulus package.

The White House wants the tax and spending package to include changes in law that would essentially eliminate the congressional role in raising the debt ceiling. The nation is due to reach that ceiling — its borrowing limit — early in the new year. Like all other aspects of the current negotiations, it's not clear how or whether that issue will be resolved.

Letting the fiscal chips fall where they may would be better than doing nothing at all to address the nation's long-term deficits, says Michael Linden, director of tax and budget policy at the Center for American Progress.

But because the nation does not face a debt crisis in which lenders refuse to give the U.S. money, it's still not worth taking the immediate economic hit that would result from the lack of a deal in hopes of achieving some long-term fiscal gain, Linden says.

"Even people who want to close the debt quickly want to do it in a different way," he says. "It is hard to find people who are unequivocally in favor of going over the cliff."