Accessibility links
Crime-Ridden Camden To Dump City Police Force The New Jersey city has surpassed its previous record for murders. City officials, who say the unionized police force has too many perks, turn to the county to provide a larger and cheaper force. 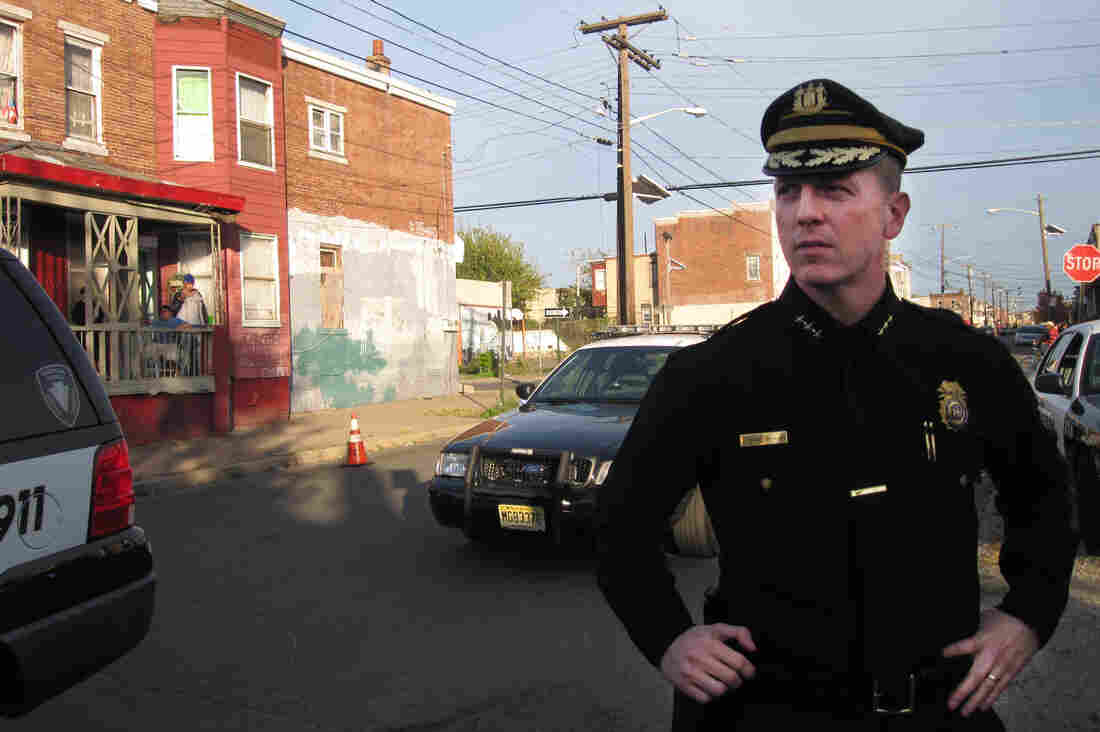 Camden City Police Chief Scott Thomson says he has shooting investigations "backlogging like burglary cases." Half of his force was laid off last year, and the city says expensive benefits in the police union contract are preventing them from hiring more cops. Ailsa Chang/NPR hide caption

As the New Jersey city of Camden blasts through its all-time-high homicide record — exceeding 60 murders so far this year — city officials have an unusual solution to rising crime: laying off the entire police department.

Year after year, Camden ranks as one of the most dangerous cities in America based on several categories: murders, rapes, assaults and robberies. But the city says it's too poor to hire more police officers. So it's dissolving its municipal police force and letting the county set up a bigger, cheaper force to replace it.

Camden officials say it's the only affordable way to bring down crime, but critics call the strategy a deliberate move to bust the police union.

The only business that's lucrative in this 9-square-mile city is selling drugs, and the police say they can't keep up with the crime. A consultant to the police department says during most night shifts — the busiest shift — only 12 officers are patrolling the entire city.

Camden City Police Chief Scott Thomson says he often doesn't have enough officers to respond to all the 911 calls.

"We don't have property crime detectives anymore. I have shooting investigations that are backlogging like burglary cases," Thomson says. "The status quo means that the people in our city are being shot and murdered at Third World country rates."

Thomson will be leading the new 400-member countywide force when it gets up and running during the first quarter of 2013. He's a man who's already used to living lean. Thomson calls food "a privilege," and snacks only on packages of peeled apple slices to get through workdays lasting 16 hours or longer.

Last January, because of budget cuts, the city laid off almost half of his police force. Thomson says he lost his entire homicide unit and narcotics unit in one fell swoop. Drug dealers printed T-shirts that read: "January 18, 2011: It's Our Time."

Now Camden has only 230 active cops to police this city of 77,000. And Thomson says even that is overstating his actual resources.

"Of the 230, on a daily basis, our average is a 30 percent absentee rate. It's a combination of calling in sick and using leave time," Thomson explained. "That puts us at 1930s staffing levels."

Still, Camden spends about 75 percent of its budget on its police and fire departments. But if a car accident doesn't result in injuries, the police won't show up. Attempted murder cases are withering without detectives to investigate. The city wants to hire more officers, but officials say the police union contract includes so many expensive benefits, they can't afford any more cops.

"What happens when the city can no longer pay? What happens when you price yourself, potentially, out of the market?" says Joe Cordero, a former New York City police officer who's helping Camden design the bigger countywide police force that's going to replace the city force.

Cordero says in his 30 years in law enforcement, he's never seen a police contract laden with so many riches. Camden officers now get 4 percent more pay if they work a day shift, and a 10 percent bump at night. Additional seniority payments can increase an officer's pay by 3 to 11 percent after five years of service. These and other fringe benefits nearly double a cop's base salary here, according to city officials. 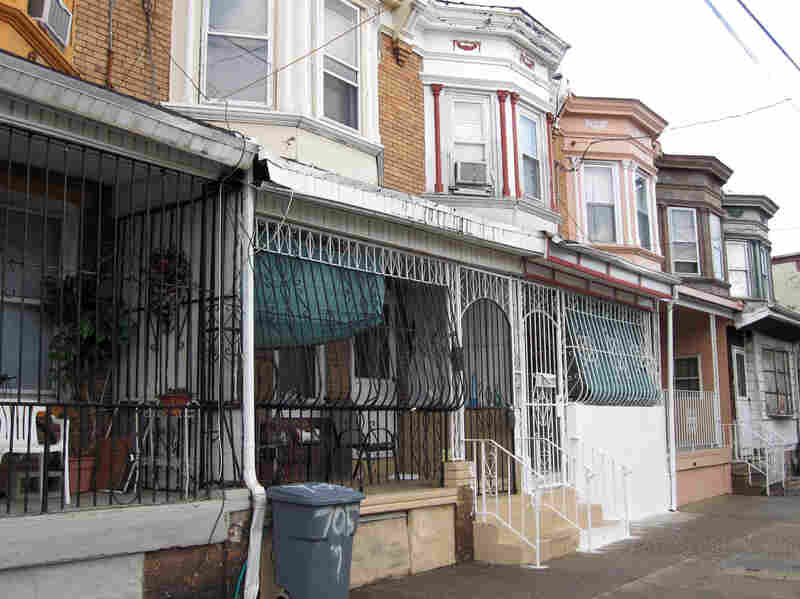 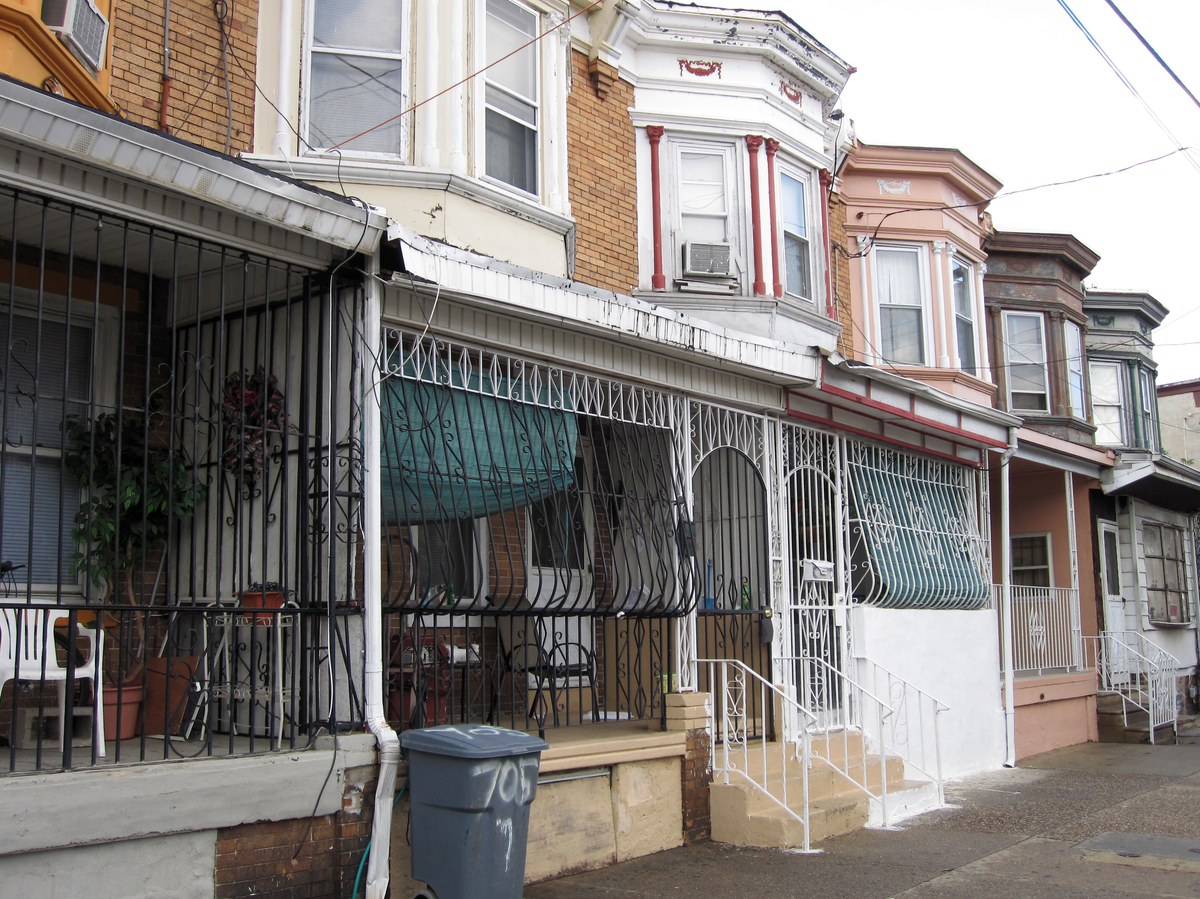 Because of the city's high crime rate, protective iron bars encase the front porches of many houses in Camden. Residents call them "bird cages."

Cordero says lots of other cities have expensive police contracts, too. Even if those contracts aren't as generous as Camden's, he says those cities will wind up outsourcing their police as well.

"It's the way of policing of the future. It's where policing is going," Cordero says. "This serves as the only viable vehicle for getting enough police officers on the streets of Camden so their citizens have a fighting chance. There are very few choices here."

A City Ravaged By The Drug Trade

Camden today is a ghost of the thriving industrial center it used to be in the 1930s and '40s. More than 40 percent of residents now live below the poverty line. Factory jobs at Campbell's Soup and RCA left decades ago.

On one afternoon drive with Thomson, signs of Camden's 175 open-air drug markets quickly cropped up. Within half an hour, Thomson floored the gas pedal and hurtled to something in the distance that caught his eye. A man in a white jacket was fleeing, and a woman started racing to her car.

When Thomson arrived, the keys were already in the ignition. Within seconds, the woman in the car admitted she was trying to buy heroin. Thomson pointed to her arms.

"There are track marks all over your arms," he said.

"Yeah, I'm in a methadone clinic, though," she mumbled, staring at the ground.

Constant demand for drugs flows into the city. Police estimate that thousands of individuals show up from outside Camden on any given day, with cash in hand. Terrell Smith, who's lived in Camden for 25 years, says that kind of business is hard to pass up.

"Whatever people coming from out of town want, guys are supplying. This is the highway right here — crack, weed, dope, pills, whatever. Whatever they want to buy, jokers gonna sell it to them."

People say they turn to crime because they can't make money doing anything else. Whenever there's a drug arrest, new dealers quickly fill the void. They don't even try to hide most of the time because the threat of getting arrested is so low.

"Mostly, around here, they yelling it out — what they got and how good it is," says Scott, who didn't want to use his last name, but disclosed that he's a heroin addict and a former drug dealer. "Even to the people that's not even using, they just broadcasting it out. They just give themselves away."

Drugs have fueled ghastly crimes in Camden. This August, a mother high on PCP decapitated her 2-year-old son. Days after that, a man, also on PCP, sexually assaulted a 12-year-old girl and then killed her 6-year-old brother by slitting his throat.

To get away from the crime, many residents just spend their days holed up in their homes, often behind iron bars that extend from first-floor rooftops all the way to the ground. People here call these encased front porches "bird cages."

On the streets, the litter isn't soda cans or candy wrappers. Instead, you see colorful plastic bags that any resident can easily decode for you — heroin, marijuana, cocaine, needle wrappers. 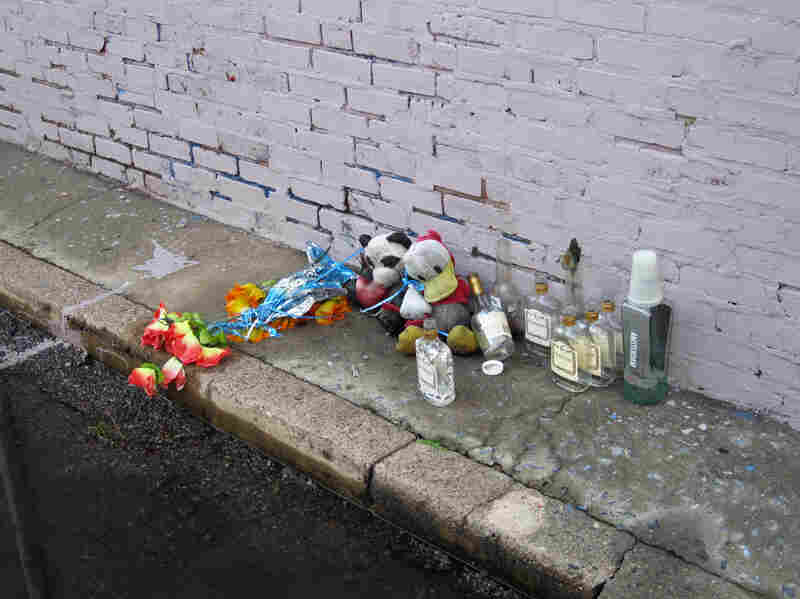 Memorials to shooting victims can be seen throughout Camden on front porches, at the side of houses and on empty lots. Ailsa Chang/NPR hide caption 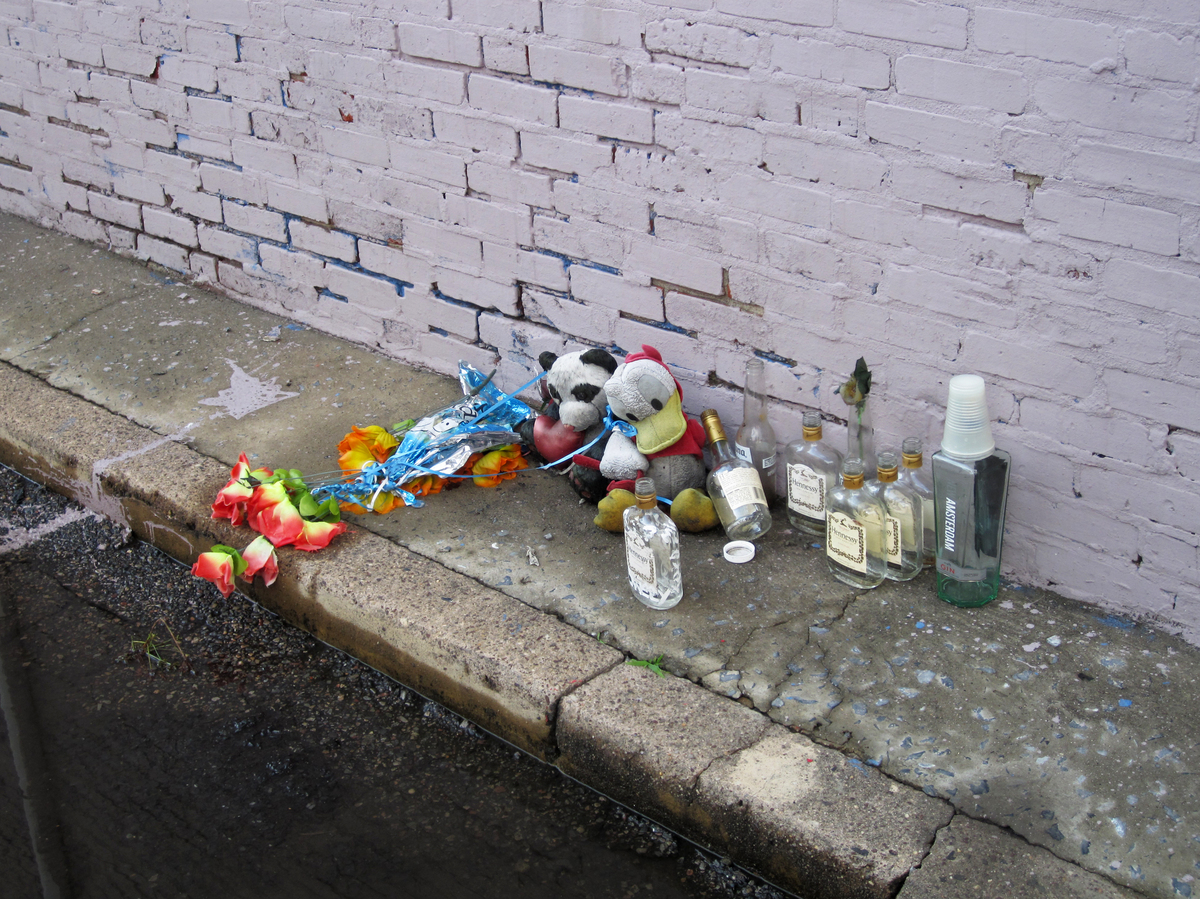 Memorials to shooting victims can be seen throughout Camden on front porches, at the side of houses and on empty lots.

This nearly broke city will get 130 additional police officers with the same money it's spending now — about $65 million — by dumping the most expensive fringe benefits.

Mayor Dana Redd says the county will try to hire back as many current Camden cops as it can. But if it hires more than half of them, the old contract has to remain in place — and no one can afford that contract anymore.

For far too long, she says, the city signed police contracts it couldn't afford because saying "no" to the police union never felt like an option.

"In Camden, the sacred cows that never got touched were police and fire," Redd says. "So I think it became a sense of entitlement. 'Everyone else gets laid off but not us.' "

John Williamson, president of Camden's police union, has negotiated three police contracts with the city and says each time, the terms were agreed upon fairly and with the city's financial health in mind.

"You have to take into consideration that all of the other administrations understood the fact that we are working in some of the poorest and most dangerous conditions in the country," says Williamson. "I would say that they, more or less, wanted to compensate us for putting our lives on the line in one of the most dangerous cities in America."

Williamson agrees some of the perks in the contract are generous, and says he's willing to sit down with the city to come up with a plan to avoid mass layoffs. But he's skeptical. He says the government is exaggerating about large numbers of officers skipping work.

"It's a clear attempt to make the current officers look like they're either inefficient or lazy, or goldbrickers," Williamson says.

Some law enforcement experts agree the city is being heavy-handed. Eugene O'Donnell of the John Jay College of Criminal Justice is both a former prosecutor and former New York City cop. He says the Camden plan is a disguised attempt to trample a police union and undo years of collective bargaining.

"This is a threat to every police officer in the United States, because ultimately, if it can happen in Camden, it can happen elsewhere," says O'Donnell. "Police officers struggled long and hard to get into the middle class, and this is a draconian measure that threatens the existence of the policing profession as a middle-class job."

Residents Trapped In Their Bird Cages

In the end, though, the arrows flying back and forth between the city and its police officers don't mean much to the residents trapped in their bird cages. Many, such as Tanya Maldonado, have already lost what's most important to them.

Almost five months ago, Maldonado's boyfriend was shot in broad daylight, just a couple of blocks from their daughter's school. He sold drugs, and Maldonado thinks he got in a dispute over drug territory.

She's sitting next to a makeshift memorial she made for him on the front porch of the house, after having just replaced the flowers with fresh ones today.

"I always have to be involved, doing something. Buying flowers or driving by here, or lighting a candle, or something," says Maldonado. "Something that shows these guys out here that somebody still loves him, and he's always thought of, and he's never going to be forgotten. Ever."

These memorials to shooting victims are the landscape of Camden — clumps of candles, stuffed animals, liquor bottles. They're displayed on front steps, at the side of houses, on empty lots. A three-hour walk revealed a dozen more memorials like Maldonado's — but no police car patrolling the streets.