Accessibility links
Post-Sandy Fixes To NYC Subways To Cost Billions Most New York City subway stations affected by Superstorm Sandy are up and running again. But others, submerged by seawater during the storm, will need to be gutted before they can reopen. The South Ferry station in lower Manhattan alone could cost $600 million to repair. 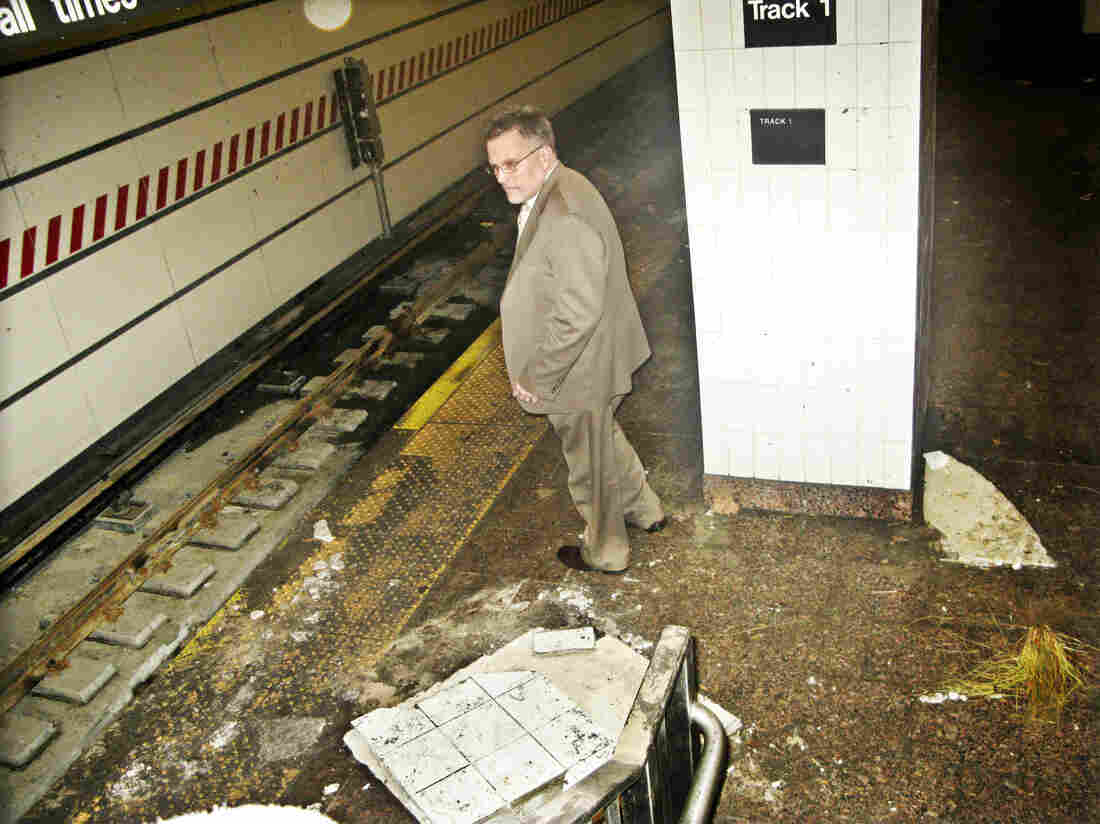 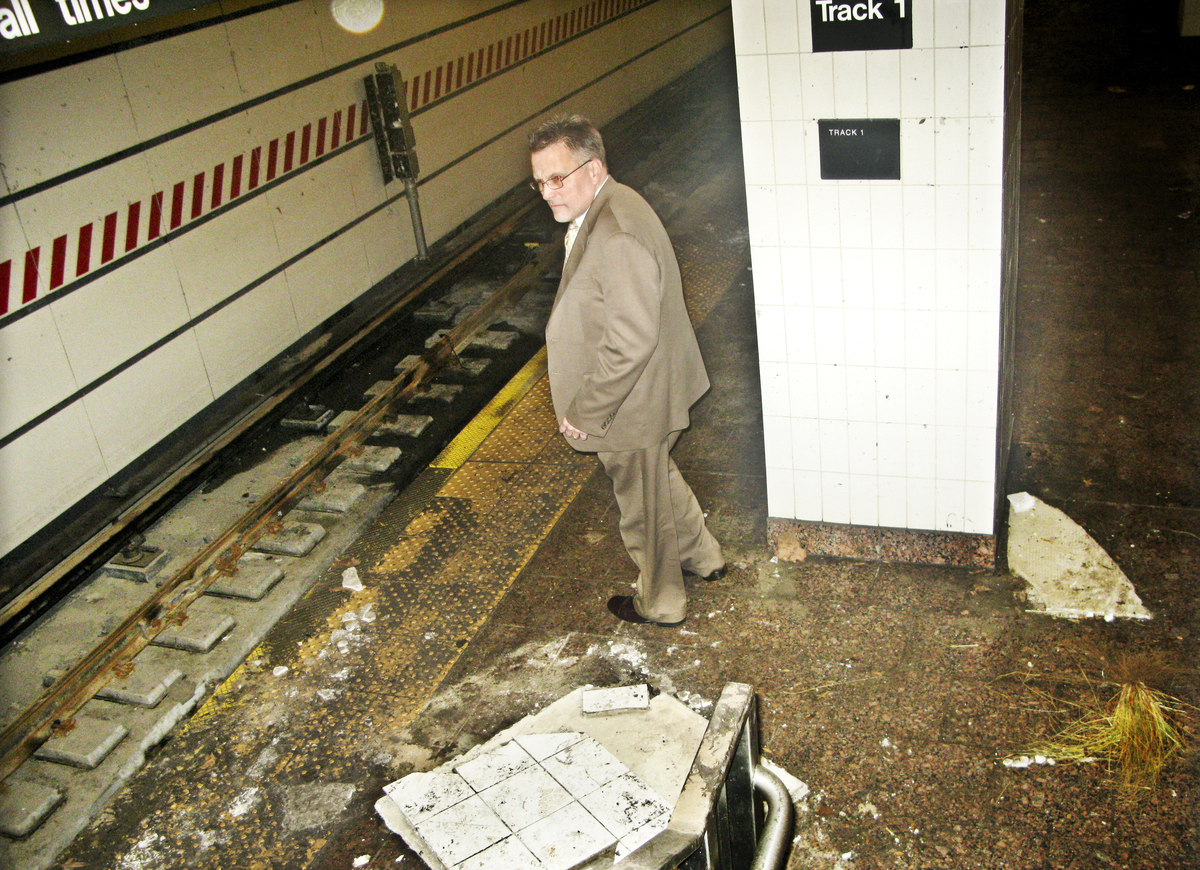 Most subway stations in New York City affected by Superstorm Sandy have opened by now, but the South Ferry station at the southern tip of Manhattan is still closed. And when you get inside, it's easy to see why.

The platform is still coated with dirt more than a month after the storm. The tile walls are covered in grime from the tracks all the way up to the ceiling 25 feet overhead. There's debris dangling from the exit signs; the escalators look like they may never work again.

Metropolitan Transportation Authority officials tried to barricade the entrance, which is just yards from the New York harbor, but the barricades didn't hold. On the night of the storm, seawater rushed in and submerged much of the station.

"You basically have a Sheetrock ceiling. This all came down," says Joseph Leader, the chief maintenance officer for the New York City subway system, as he guided several reporters through ankle-deep water in a dimly lit passageway.

"The tile, the panels — that stuff I would say can be cleaned. Everything else I think needs to be gutted out and replaced." 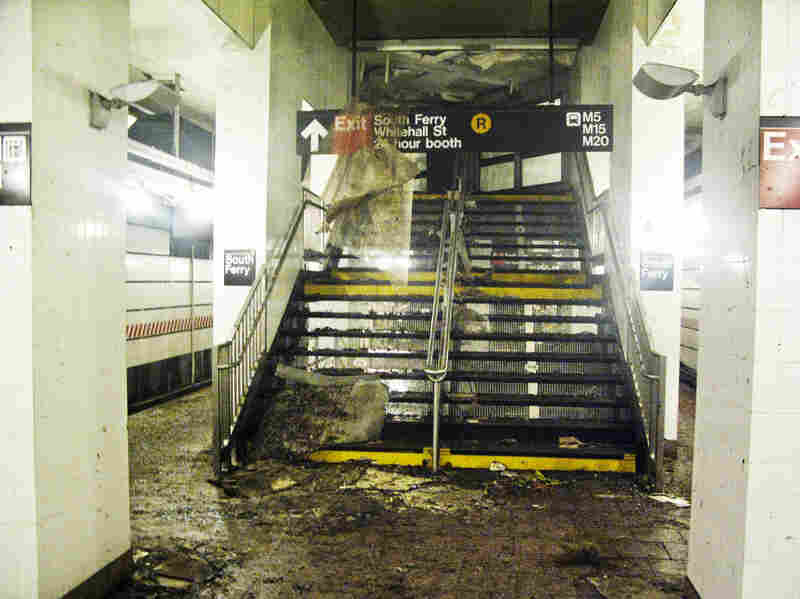 This platform at the South Ferry subway station was flooded by seawater during Superstorm Sandy. Joel Rose/NPR hide caption 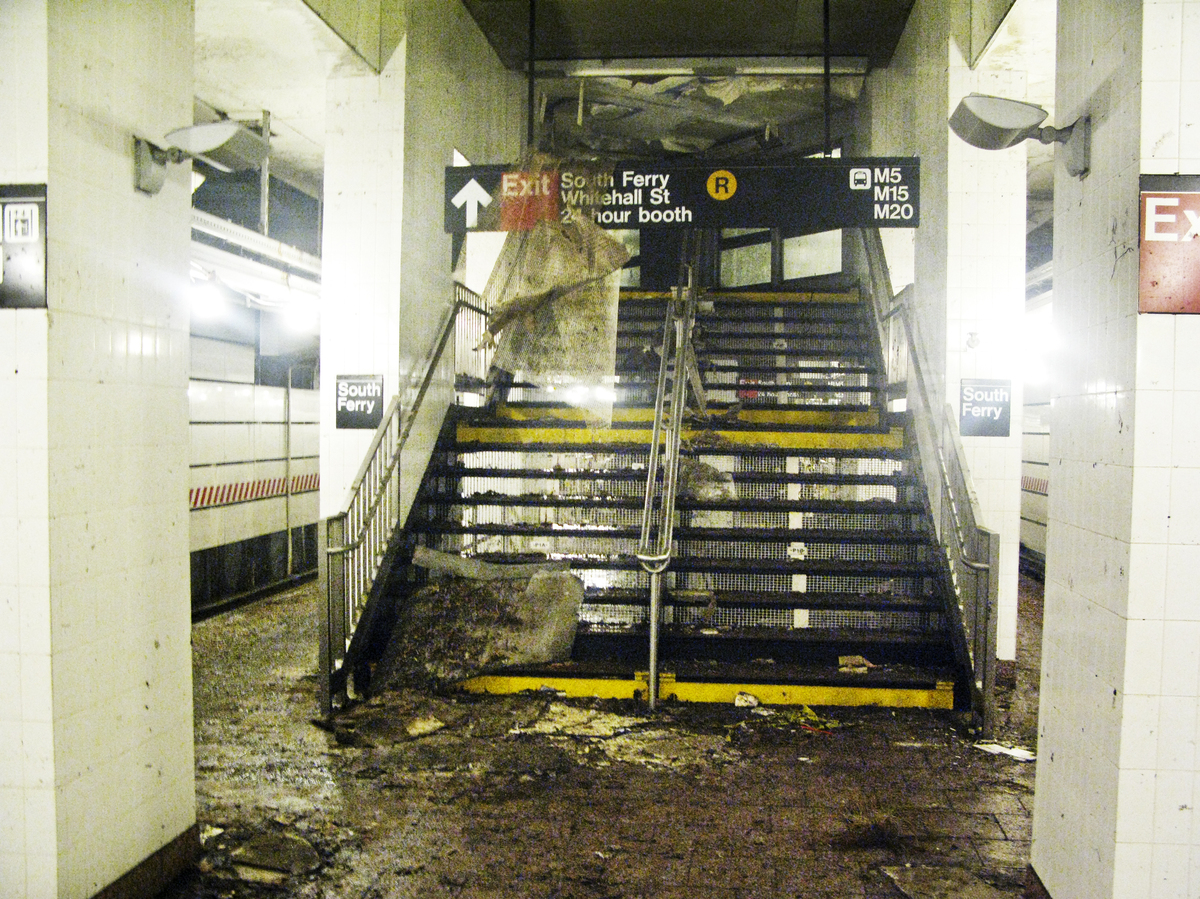 This platform at the South Ferry subway station was flooded by seawater during Superstorm Sandy.

That includes all of the electrical wiring and all of the ductwork. Leader says the track itself can be saved, but anything that runs on electricity can't. That includes a whole room full of switches, relays and other specialized electronic gear that was installed just four years ago.

Saltwater has corroded contacts for the relays. "You could try and clean this but you'd never get 100 percent where reliability would be good," Leader says. "So the only way to do this is really just to rip this out and start from scratch."

That may be one reason subway officials say this station alone could cost $600 million to fix. Leader's boss — MTA Chairman Joe Lhota — testified before a Senate subcommittee in Washington on Thursday about the extent of the damage.

"We're nowhere near normal operations. It's important to remember that hundreds of millions of gallons of saltwater completely inundated our system that's over 100 years old. We will be feeling the residual effects of this storm for months, if not years, to come," Lhota said.

Lhota estimates it will cost $5 billion to get the subway system back to where it was before Sandy. But New York Sen. Charles Schumer says that should be only part of the goal.

"You can't replace exactly what has been damaged. But even if you could, you wouldn't want to. You want to make sure that the next storm that occurs, that we are much more flood-proof," Schumer says.

Transportation officials provided few specifics on what that might mean — except that it will require lots of additional federal money. That may be hard to come by as Congress and the White House wrestle over deficit reduction plans. For now, Leader says riders who want to catch the subway at South Ferry will have to walk half a mile to the next stop.

"For the most part, New York has been resilient in that sense of understanding that we took a big hit, and it's gonna be like this for a while," says Leader.

Leader says it may six months to a year before the South Ferry station is open to riders.