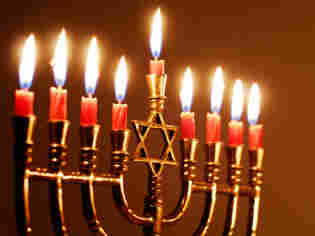 In stories by four noted authors, this year's edition of Hanukkah Lights showcases some of the program's most touching and insightful moments: Two teenagers find the formula to bridge a bitter family divide; the life of a cynical young reporter is changed by a single mysterious encounter; a reluctant grade-school student stands up for his heritage, and is wounded in the line of duty; and a despairing mom reconnects with her distant yet devoted daughter. Susan Stamberg and Murray Horwitz bring these generation-spanning tales to life.

'The Latke Maven' By Gerald Shapiro

In the Kansas City, Mo., of 1959, an intrepid fourth-grader weaves unlikely tales of Judaism for his gentile classmates until a boast about Hanukkah finds him cooking up a small miracle all his own. Shapiro is the author of story collections and novellas, including From Hunger, Little Men and Bad Jews and Other Stories.

A cynical young reporter attending a Hanukkah season meeting of angry rabbis' daughters finds new clarity after a mysterious encounter brings her face to face with overlooked traditions. Leegant's story collection An Hour in Paradise won the Edward Lewis Wallant Award for Jewish Fiction and was a finalist for the 2004 National Jewish Book Award.

At a high school science camp, Kevin recognizes someone he knows should be part of his life but whom he has never met, and sets out to make things right. O'Connell is also the author of Penina Levine Is a Potato Pancake and Penina Levine Is a Hard-Boiled Egg. She lives in Pittsburgh.

A devoted but weary mother finds new hope in a rebellious daughter's love. Brown is also the author of Ask for a Convertible, a Washington Post best book of 2008 and winner of a 2009 American Book Award. She lives in Michigan with her family.