Accessibility links
Getting The Royal Treatment En Route To Versailles Any ordinary commuter or tourist can be a royal for a day traveling on France's Versailles trains. Each of the cars of the 30 trains is decorated to resemble spaces at the sprawling and opulent Palace of Versailles.

The opulence of the court of Louis XIV ... on a commuter train from Paris?

That's the surprise awaiting some lucky visitors to the Palace of Versailles. The cars of about 30 trains traveling between Paris and the palace have been completely decked out to reflect the sprawling and stately residence of former French kings, providing a sneak preview of sorts.

On a recent morning in downtown Paris, we run to jump aboard one of the newly decorated commuter trains to Versailles, which is located about 12 miles west of the French capital.

Bertrand Gosselin of the French state rail company, SNCF, says the idea for the trains, which began running in May, came up in a joint meeting between officials from the palace and the rail line that serves it.

"We decided to make something different," Gosselin says. "Why not make something inside the trains to be already in Versailles when you take your train in Paris?" 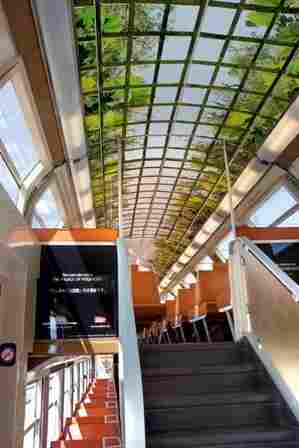 This car on the new Versailles commuter train is decorated to resemble the gardens on Marie-Antoinette's estate. Courtesy of Christan Recoura hide caption

The rail cars are decorated in seven different motifs reflecting different areas of the Palace at Versailles — including the famous Hall of Mirrors, the queen's bedroom, the lavish gardens of Marie Antoinette's estate, the library of Louis XVI, the decor of a royal carriage and the peristyle of the Grand Trianon, which Gosselin notes was a private room where the king could have "some relations with women."

The special seven-car trains run on the inner city rail line that links Paris to Versailles and other suburbs. From central Paris, it takes about 30 minutes to get to Versailles.

Approximately 500,000 people use the line each day, including commuters and tourists. About one-quarter of them will be lucky enough to board the Versailles train, whether they're headed to the palace or not.

Joe Hastings and his wife, Christina Kunadin, tourists from San Francisco, had just ridden on one of the special trains out to Versailles.

"I think it's well done because it's beautiful, it makes you realize the elegance that you're going to be entering," Hastings says.

For photo-snapping Turkish tourist Beliz Kudat, the train is a little taste of home.

"It's gorgeous. It's beautiful," Kudat says. "Actually we're from Istanbul, so it's a bit like [the] Orient Express."

Each rail car is transformed into a section of the chateau through the use of sticker-like wall coverings made of a special plastified film. The vivid images are cut perfectly to conform to the double-decker train's shape and surface areas.

And it's not just the tourists who are agog.

Roscoe Acher is holding a broom and gazing at the paintings on the ceiling. Acher, a janitor on his way to work, calls the cars "a real joy," saying the decorations are so much nicer to look at than the graffiti.

Back in her office at the chateau, Catherine Pegard, the director of Versailles, is happy to hear such reports. She says that's one reason why the trains haven't been defaced.

"We're very proud that there's been basically no graffiti or tags on these trains," she says. "And I think it's because beauty demands respect and makes people happier. So maybe there's less of a desire to do damage."

On the way back to Paris, Ingrid Lefebvre reads her newspaper in the bibliothèque (library) car, surrounded by images of the books of Louis XVI, the last French monarch to reside at Versailles.

She says the designs are incredible, adding that even though it's fake, it's well done and makes you feel a little closer to history.

But not everyone is moved by the decor. In a city often described as an open-air museum, the abundance of art and beauty has apparently left some of its denizens a little blasé.

"I'm indifferent to it," says Bernard Nevio. "After all, it's nothing but a copy. And an ersatz copy at that."

Copy or no, for this reporter, riding through Paris in Marie Antoinette's boudoir beats taking a regular commuter train any day.