Accessibility links
Baltimore Says, 'Immigrants Welcome' Baltimore's population has been declining for decades. Now the city is reaching beyond its borders for growth, courting immigrants with new programs and laws. The big question: Will it work? 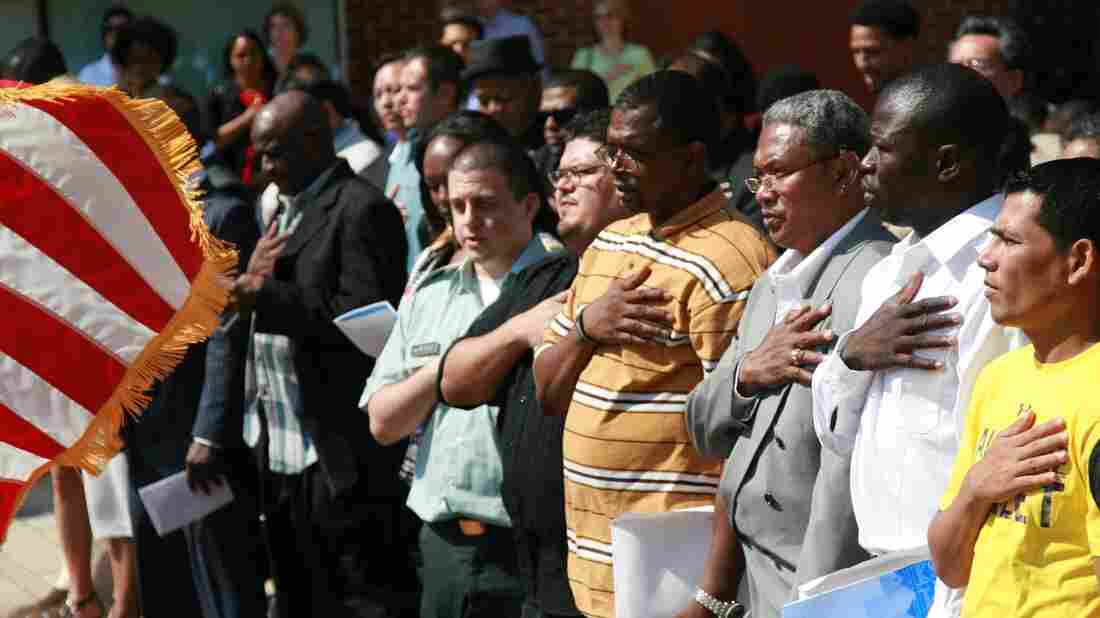 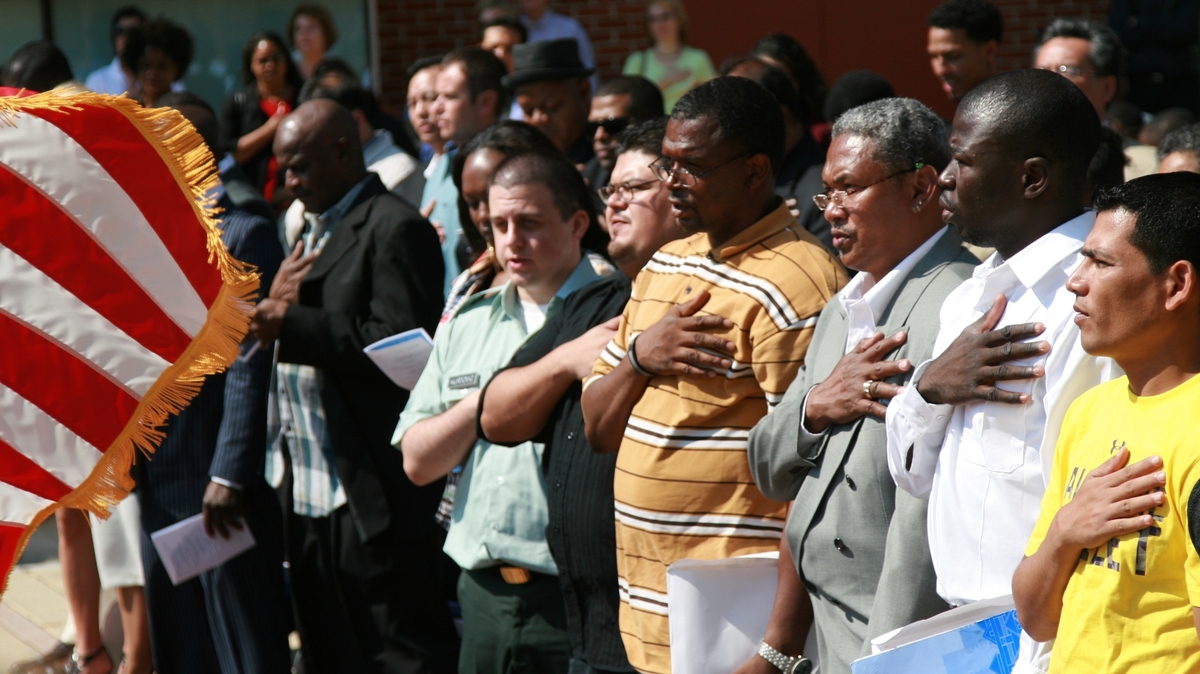 As part of the National Immigration Integration Conference, nearly 50 new American citizens were sworn in Sept. 22.

Hundreds of people gathered in September at Baltimore's harbor as the wind gusted off the water's edge. Nearly 50 of them were about to be sworn in as U.S. citizens. Some were young, some old. There were uniformed members of the U.S. military, parents and children. There were immigrants from El Salvador, China, Honduras and countries in between. They raised their right hands, recited the naturalization oath to the United States, and were declared fully American.

The national conversation on immigration reform has been stalled for years, and while President Obama says it's a top priority for his second term, Baltimore is moving ahead with its own agenda: It's courting immigrants in an effort to revitalize its shrinking population.

Baltimore was once a major port city and destination for people moving to America. In 1950, nearly a million people lived here. Since then though, Baltimore has become known for high crime rates and abandoned homes. The city's population has fallen to just half of what it was in the 1960s.

Baltimore Mayor Stephanie Rawlings-Blake has a plan: She's looking to bring in 10,000 new families over the next decade, focusing on immigrants, a group that has helped other large cities grow. She's hoping new families will boost income and property tax revenue, helping to reignite the city's economy.

Zakaria al-Saghir is one of those new immigrants. He's originally from Iraq, and moved to Baltimore County with his wife and their three kids in September. Today he's in a small discussion group at Baltimore's International Rescue Committee, an organization that helps newcomers learn the ropes in the U.S. He's seated in a semi-circle with five other immigrants as their trainer, Sara Bedford, goes over everything from properly shaking hands, to filing taxes. 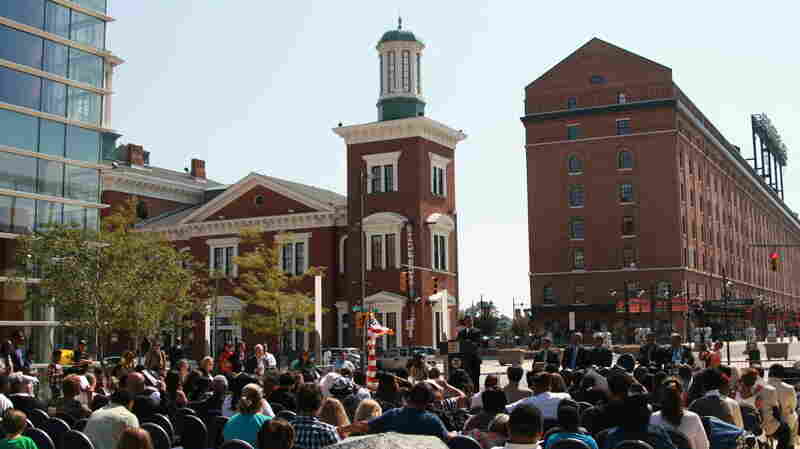 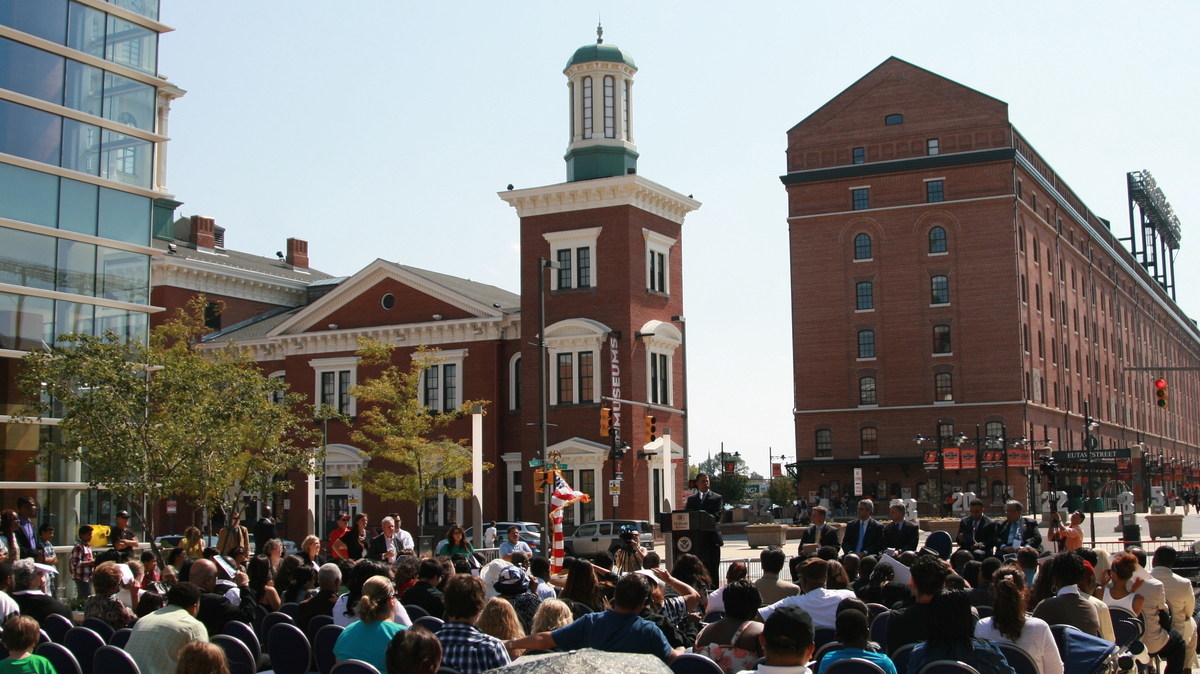 Al-Sagheer says he could have moved to another state, but his relatives convinced him to settle just outside of Baltimore.

"They speak about the population, how they treat the new immigrants, the style of the city, how they live in the city, everything," he says. "They told me many good things about living in Baltimore."

That word of mouth is exactly what Rawlings-Blake is counting on to bring people into the city. Her administration is trying to make all immigrants feel safe and welcome. Her boldest move so far is prohibiting police and city officials from ever asking residents about immigration status.

"I don't really think of people as legal or illegal," she says. "Are you productive, or are you not productive? That's really my focus."

The IRC is a nonprofit organization, but Baltimore City is instituting programs to help foster that growth, too, by offering Spanish-language nutrition and exercise classes, and Spanish story time at the library. The city has even begun cultural training for the police.

Catalina Rodriguez, Baltimore's Hispanic Community Liaison, is charged with making sure many of these programs run smoothly. She's at a police precinct in north Baltimore training about 20 officers to recognize foreign identification cards. Immigrants who can't get a state-issued driver's license are encouraged to carry ID cards from their home countries.

Rodriguez flashes a slide of an Ecuadorian ID, explaining what each line on the card means, then adds, "Remember, Ecuadorians are an emerging group in the city of Baltimore, we have approx 1,000 Ecuadorians in this city."

Rodriguez also reminds officers they can use an interpretation service on their mobile phones in 170 languages, 24/7.

The city is spending money on training programs like this one, but Rawlings-Blake says the costs are negligible compared to the revenue new families will generate in taxes.

It's too early to calculate Baltimore's return on investment, but there is another Northeast city that also tried to fight population decline by recruiting immigrants: Philadelphia.

Philadelphia had the same kind of population crash as Baltimore. It peaked in the 1950s, then went into decades of decline. When the city finally grew again in 2010, the bulk of the newcomers were Asian and Hispanic immigrants. 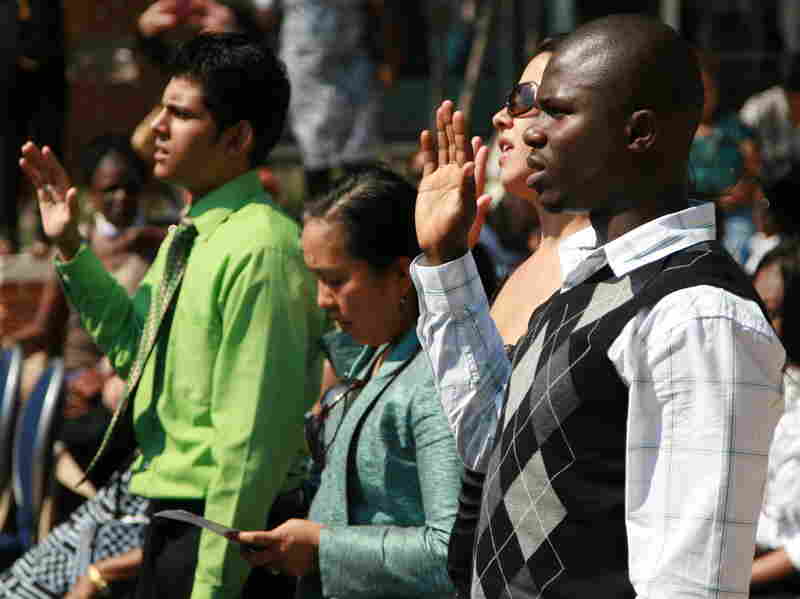 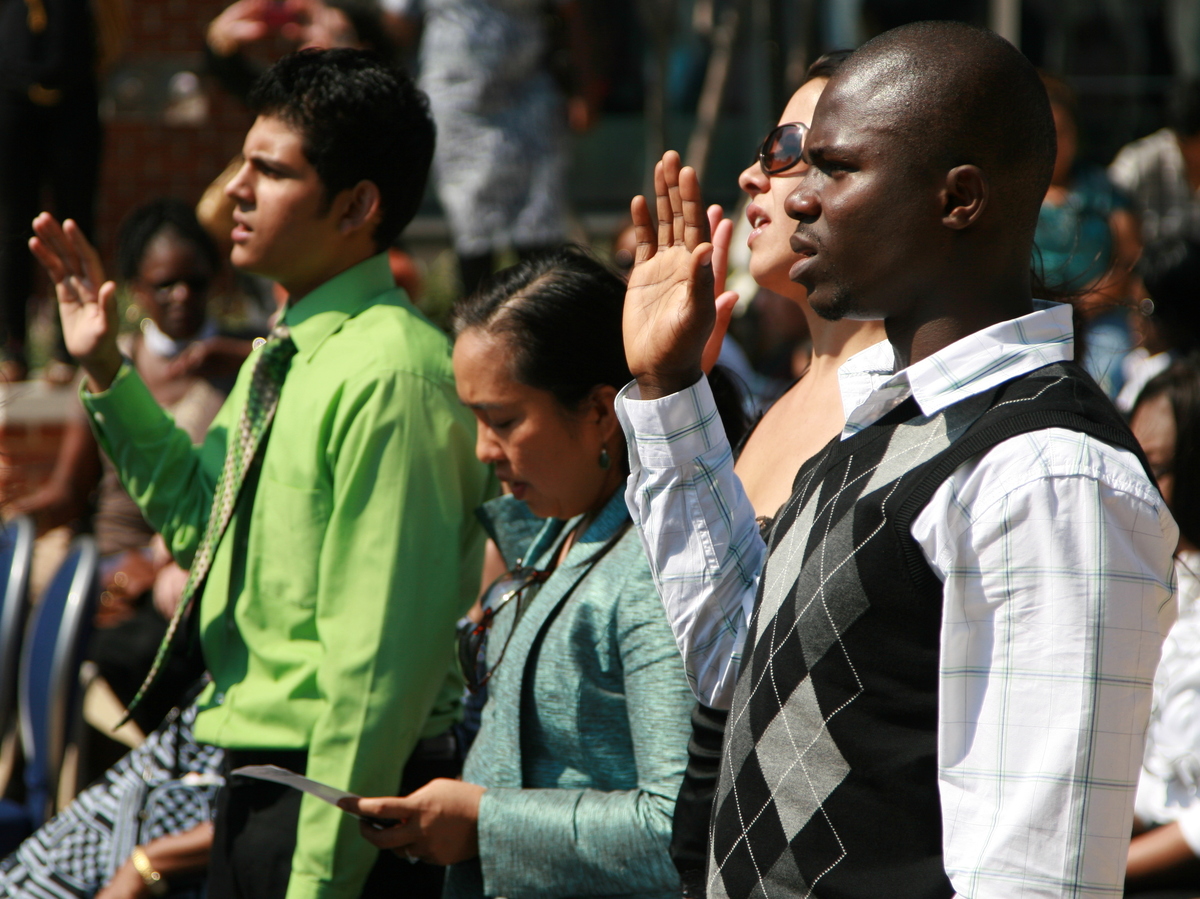 Nearly 50 immigrants took the U.S. naturalization oath at the Baltimore harbor on Sept. 22.

Amanda Bergson-Shilcock has worked for nearly a decade at The Welcoming Center for New Pennsylvanians. It's one of many nonprofits that have teamed up with the city to help immigrants find jobs, start businesses and put down roots in the city.

"The whole city was doing handsprings when the news came out from the Census Bureau about a year and a half ago that our population is growing again," she says. "If it had not been for the growth in the city's immigrant population, we would not have grown, we would have had another decade of population losses.

For cities hoping to follow in Philadelphia's footsteps, Steven Camarota of the Center for Immigration Studies has different advice.

He's skeptical that Baltimore, or any city, can grow its immigrant population simply by ignoring immigration status or offering services.

"If you have a city that native-born people have moved out of in very large numbers, it's very unlikely that you'll get large scale immigration to that city," he says.

Camarota says immigrants, like anyone else, go where there are jobs. He says even if cities like Baltimore, which has had a stubbornly high unemployment rate, could attract immigrants, it wouldn't mean much for the local economy.

"In general the research shows that immigrants do not pay enough in taxes to cover their consumption of public services," he says. "In general it creates a lot of fiscal costs."

But David Kallick, director of Immigration Research at the Fiscal Policy Institute, disagrees with Camarota on that point. Kallick says attracting new immigrant residents does, in fact, help a city, whether they make a million dollars a year, or $30,000.

"If you think about property taxes for example, having empty buildings is very expensive to a city," Kallick says. "If you have people moving into a neighborhood, they're going to be paying some property taxes."

In the short-term, Baltimore's open-door policy is probably not going to fill city coffers. There is a cost to providing new immigrants services like language classes and health care. For Baltimore to be successful, Kallick says, it's going to have to do more than roll out a nice welcome mat to newcomers. it's going to have to invest long-term.