Accessibility links
Affirmative Action: Factious Past, Uncertain Future The Supreme Court's expected ruling on a case involving the University of Texas could end race-based affirmative action. But while some say the program works and is still needed, others argue there are better ways of measuring diversity. 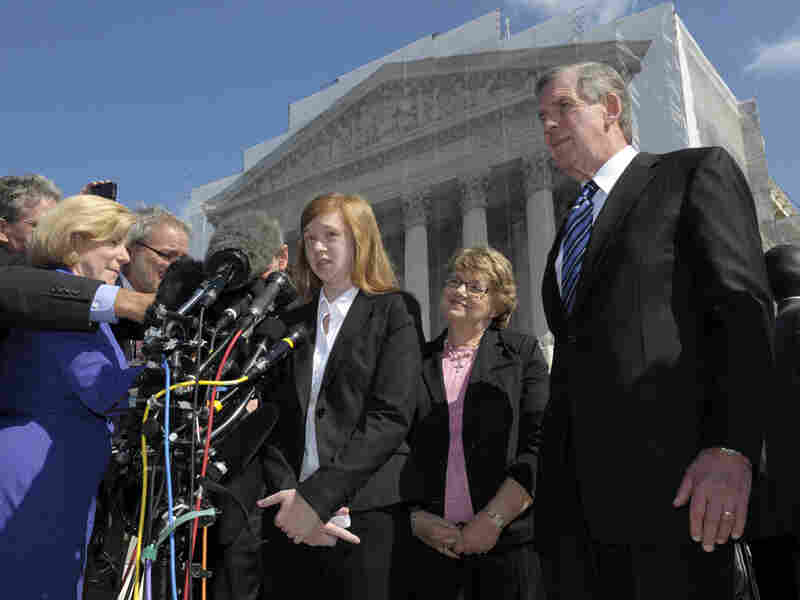 Abigail Fisher, the Texan involved in the University of Texas affirmative action case, accompanied by her attorney Bert Rein, right, talks to reporters outside the Supreme Court in October. Susan Walsh/AP hide caption 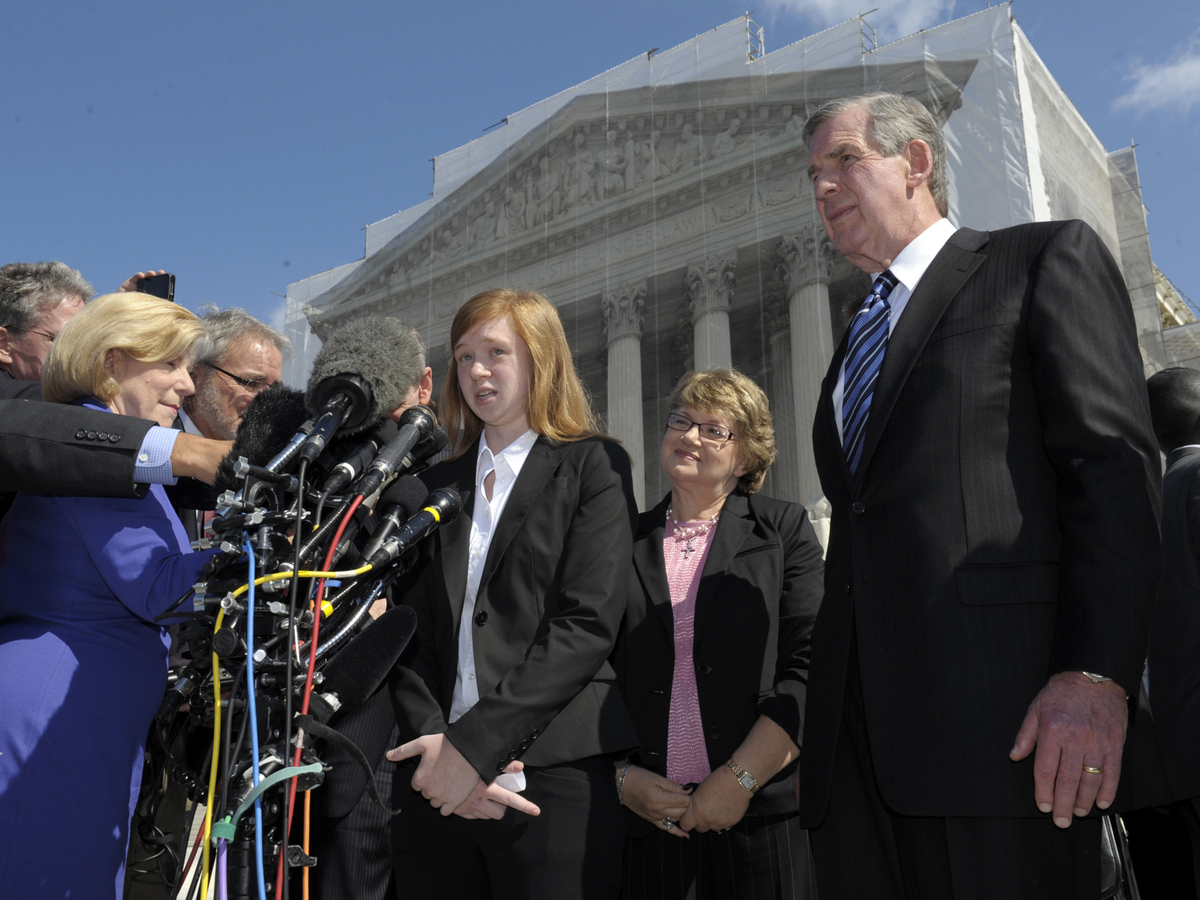 Abigail Fisher, the Texan involved in the University of Texas affirmative action case, accompanied by her attorney Bert Rein, right, talks to reporters outside the Supreme Court in October.

The Supreme Court ruled in 2003 that universities can consider race as a factor, if the goal is to achieve diversity. But in that case, former Justice Sandra Day O'Connor famously wrote that within 25 years, race-based affirmative action would become obsolete.

But affirmative action could disappear sooner than that.

In October, the Supreme Court heard a case brought by a young woman named Abigail Fisher against the University of Texas at Austin. Fisher, who is white, was denied admission to the school in 2008. She argues that it was because of race.

If the court rules in her favor, it could prohibit all universities and colleges — both public and private — from considering race as a factor in admissions. Legal experts widely believe a narrow majority of the justices will side with Fisher.

On June 4, 1965, President Lyndon Johnson gave the commencement address at Howard University in Washington, D.C. In that speech, he set down the intellectual argument in favor of a system that is now known as affirmative action.

"You do not take a person who, for years, has been hobbled by chains and liberate him, bring him up to the starting line of a race and then say, 'You are free to compete with all the others,' and still justly believe that you have been completely fair," he said.

Julian Bond, the famed civil rights leader, was just 26 at the time. That speech made a profound impact on him and many other civil rights leaders. Bond argues that it began a process that was — and still is — necessary. He says people of color and women are in jobs and schools to which they didn't have access before.

"The forthcoming of affirmative action in its many forms and ways made it possible for these formally excluded groups to be included," he says. "So it's been a great success."

But over the past 20 years, in several states, affirmative action has been scaled back or even banned as a factor in university admissions. The most notable example was California where voters approved a ban in 1996 on race as a factor in admissions.

"The effects were really devastating, and Berkeley clearly began to lose the critical mass of African-American and Latino and Native American students that the campus had achieved over a number of years," says Bob Laird, who was the head of admissions at the University of California, Berkeley, from 1993 to 1999. "And the campus has never recovered."

The assumption, says Laird, author of The Case for Affirmative Action in University Admissions, was that race was the sole factor Berkeley had considered prior to the ban.

Proponents of the legislation thought admissions offices would turn to other factors, such as socioeconomic status, and new ways of recruiting students.

"The fact was that Berkeley had included low socioeconomic status among its diversity variables for at least 30 years," Laird says.

The university system had also been forming outreach and academic development programs since the mid-1960s, he says.

"The notion that somehow we could find something we hadn't thought of was naïve, and in some cases, simply disingenuous," he says.

An often-used critique of affirmative action is that implementing a quota system is unfair, but Laird criticizes that notion.

The argument of unfairness also tends to accompany the idea of "reverse discrimination," a term Laird calls a "very persuasive sound bite."

"The notion that somehow dialing back slightly the needle on white privilege in higher education constitutes the same form of legal discrimination that took place for 300 years against African-Americans and, to a large extent, against Native Americans, and ... in a more recent way, against Latino students, is really a false equivalency, and I think very careless thinking," he says.

The Case Against Affirmative Action

The most vocal opponent of using race in admissions in California was Ward Connerly, head of the American Civil Rights Institute in Sacramento. He led the campaign in support of Proposition 209, which banned the use of race and gender preferences in California state hiring and in university admissions.

He acknowledges that the number of African-American and Latino students at some of the state's most selective public universities has dropped. But he doesn't think that necessarily indicates a problem.

"Black students go not only to UCLA and U.C. Berkeley, they go to historically black colleges and universities, which draw a very large number of students from that pool of high school graduates who are black," he says. "They go to Harvard and Yale with scholarships and other places which further depletes the pool of black students."

Connerly himself came from a disadvantaged background. He was raised by his grandmother in a low-income area of Sacramento. He attended a community college and then went to Sacramento State College.

"I never got to go to the University of California, yet I had the great fortune of serving on the governing board of the entire system," he says.

Connerly has said that he worries about the effect of affirmative action on minority students.

"I think that we marginalize people when we have this system of treating them differently," he says. "And that marginalization carries with it the presumption that people who otherwise are really doing all right on their own, they're competing, but just the mere fact that they are 'a minority' carries with it the belief that they wouldn't be there were it not for the largesse of somebody giving them an edge, giving them a benefit.

"And the very system of fairness that I think runs deep in American life ends up harming those who are the perceived beneficiaries of affirmative action."

Rick Kahlenberg, a senior fellow at the Century Foundation, is one of the leading proponents of this idea. He argues that if you look at the most selective colleges and universities in America, you'll find that there are 25 times as many rich kids as there are poor ones.

He says you achieve ethnic diversity by only using class as an admissions factor by defining socioeconomic status in a sophisticated way.

"In addition to looking at concentrated poverty, it's important to look at wealth," Kahlenberg says.

He says that since an individual's net worth is accumulated over generations, the wealth gap by race is much larger than the income gap.

"[The Century Foundation] looked at 10 leading universities in this country where race has been dropped from admissions, usually because there was a voter initiative to ban the use of race at public institutions," he says. "And in seven of the 10 cases, universities were able to get as much or more racial and ethnic diversity — that is, African-American and Latino representation — as they had using race and ethnicity in the past."

Universities nationwide may have to remodel their admissions, depending on the outcome of Fisher v. University of Texas. But the Supreme Court could also offer up a narrow opinion that only applies to the state of Texas, making Justice O'Connor's 25-year prediction more plausible.