Accessibility links
Hunger Still Haunts North Korea, Citizens Say A U.N. report says North Korea has more food than in previous years. But North Koreans who spoke to NPR say conditions are still dire. Food has become too expensive for many North Koreans, and people are dying of hunger, they say. 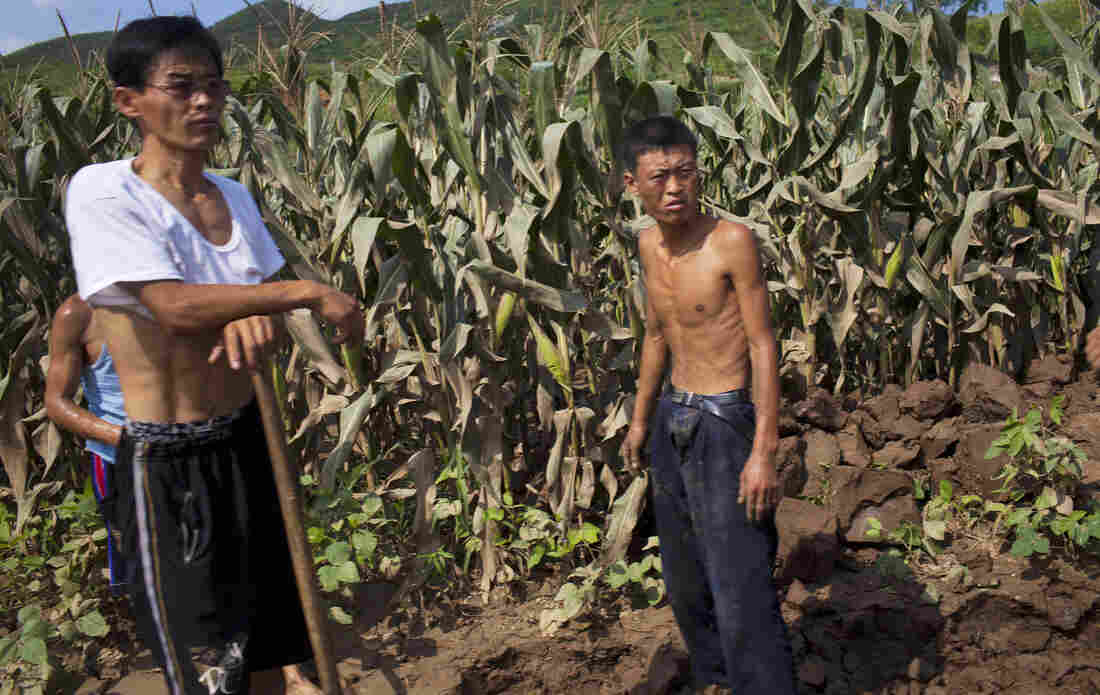 The U.N. says food supplies in North Korea have increased, but citizens who spoke to NPR say many people are going hungry. In this photo from Aug. 13, workers stand next to a field that was damaged by flooding in Songchon County, North Korea. David Guttenfelder/AP hide caption 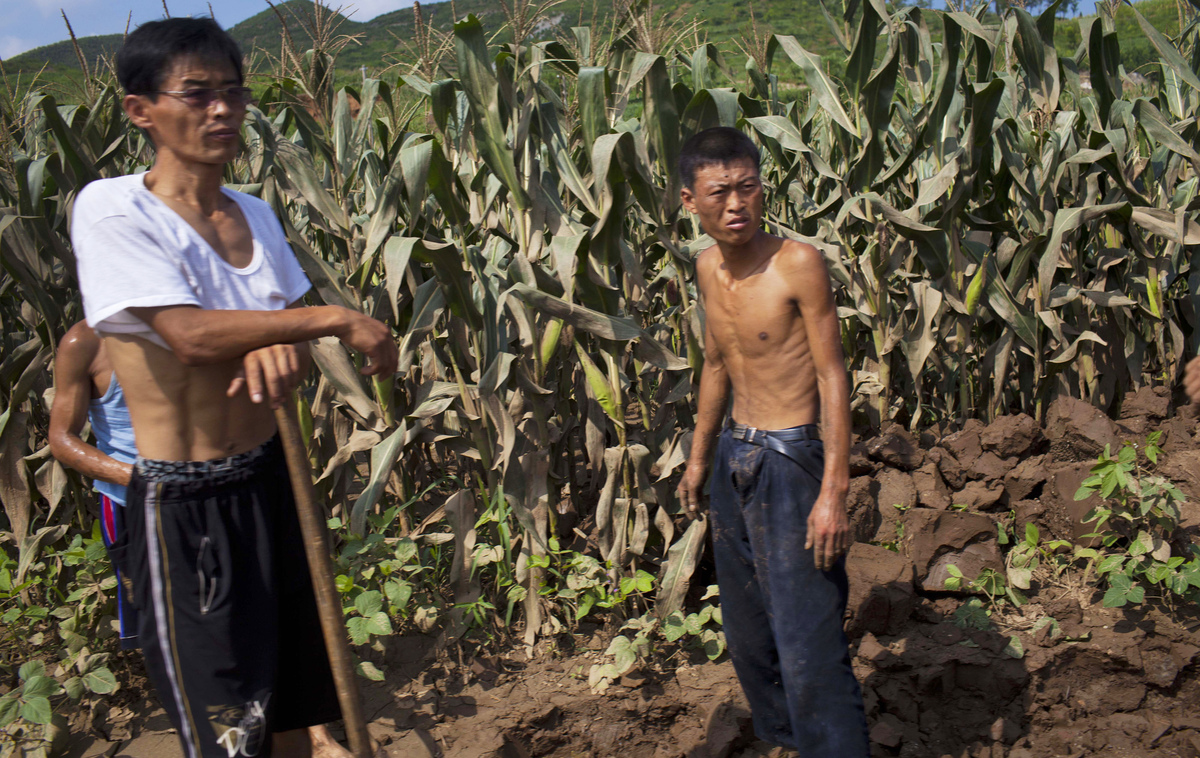 The U.N. says food supplies in North Korea have increased, but citizens who spoke to NPR say many people are going hungry. In this photo from Aug. 13, workers stand next to a field that was damaged by flooding in Songchon County, North Korea.

While North Korea has long struggled with dire food shortages, the United Nations now assesses its food situation as being the best in many years. But NPR has had unusual access to five North Koreans in China, who paint a dramatically different, and alarming, picture.

Even as North Korea mourned its leader Kim Jong Il last December, one surprising thing was on people's minds: fish. State-run television showed people lining up in shops; the dear leader's last wish, apparently, was to provide fish to his people.

Every day you wake up in the morning and you wonder what you are going to eat, and you worry all the time.

The news agency equated the supplies of fresh fish with Kim Jong Il's "deep concern" for the people. This might explain recent features on gleaming new supermarkets stocked with the latest goods, and an inspection trip by the new leader, Kim's 20-something son, Kim Jong Un, to a fancy new meat shop, accompanied by top army commanders.

"Kim Jong Un said the intention of the party is to provide a happier life to our people — best in the world," state-run television reported, showing the younger Kim giving solemn instructions on the management of meat shops.

Indeed, an annual report by the U.N.'s Food and Agriculture Organization and the World Food Program issued last month found the food situation to be better than in previous years. An improved harvest means North Korea's food gap stands at 207,000 tons, the lowest figure "in many years."

But all five North Koreans I met in China say that's not the whole story. The markets are full of food, they agree, but most ordinary people can't afford to buy it. State rations aren't being distributed, and even some soldiers are going hungry. One man who gave his name as Mr. Kim described the drastic action one family he knew took. 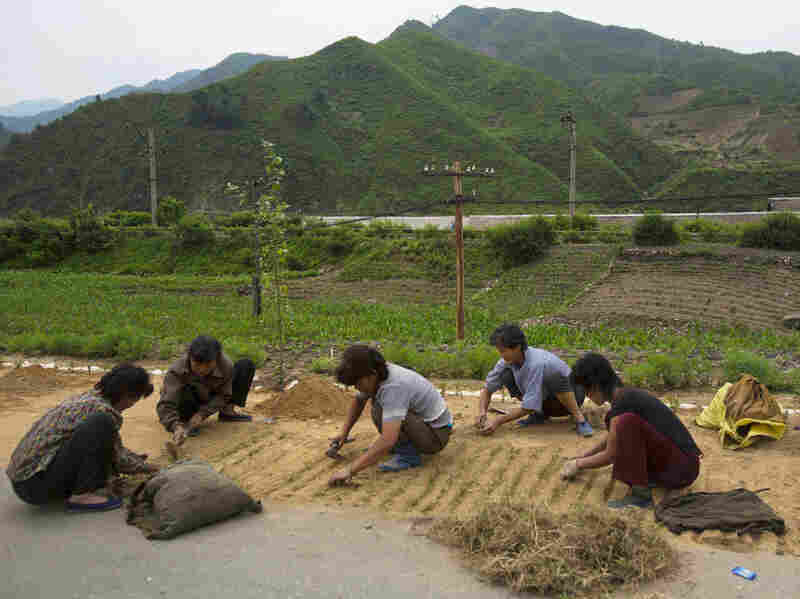 North Korean women work on a roadside in North Pyongan province, North Korea, in June. North Korea increased its staple foods production for the second year in a row, but its citizens are still suffering from a serious lack of key proteins and fats in their diets, a U.N. report says. David Guttenfelder/AP hide caption 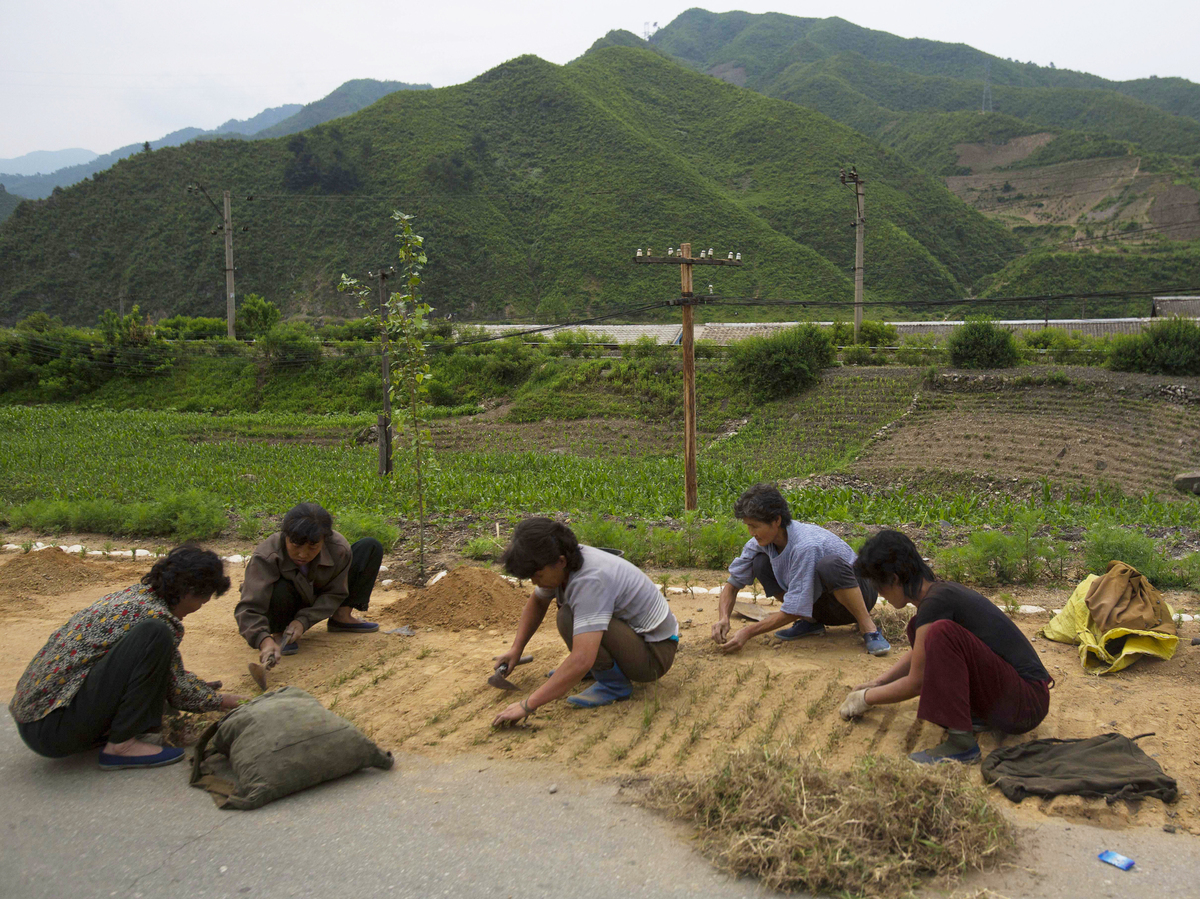 North Korean women work on a roadside in North Pyongan province, North Korea, in June. North Korea increased its staple foods production for the second year in a row, but its citizens are still suffering from a serious lack of key proteins and fats in their diets, a U.N. report says.

"I saw one family, a couple with two kids, who committed suicide. Life was too hard, and they had nothing to sell in their house. They made rice porridge, and added rat poison," he recalls. "White rice is very precious, so the kids ate a lot. They died after 30 minutes. Then the parents ate. The whole family died."

A life marked by persistent, unending hunger is reflected in the bodies of North Korea's people. In April this year, the North Korean military lowered its minimum height requirement to 4 feet 7 inches, just slightly taller than the average South Korean fourth-grade student.

The U.N. report found that in Ryanggang province, where the situation is worst, almost half of the children are stunted from malnutrition. Even in the showcase capital, home to the elite, one in five kids is stunted.

"I saw five people who died of starvation right before I left this year," says another interviewee, Mrs. Kim, who lives on the outskirts of Pyongyang and is not related to Mr. Kim. Talking to reporters is risky for North Koreans, so NPR is using only the surnames of the people interviewed for this story. "There was one father, who worked in the mines, but his job provided no rations. His two children died. Apart from that family, I know of one other woman and two men who starved to death."

All those I spoke to are part of the urban elite, possessing the money and connections to get visas that allow them to enter China legally. Yet they, too, are physically smaller than usual, stunted from years of hunger.

"Before I left, I thought North Korea was the best country in the world. After I came out, I saw this was not true. I was ashamed because it's so poor.

The lives they describe are an almost unimaginable slog. Mrs. Kim wakes up at 4:30 every morning to feed the animals that she sells at the market. Although she's a party member, she breaks the law by running an illegal small-scale distillery. When I ask why she takes the risk, she is direct: "If you don't do that, you starve."

Price instability at the markets has added new uncertainty, with the price of rice ricocheting up and down. Recent surveys of defectors show growing reliance on those markets. Nearly half of those surveyed in one study reported that all of their income came from private business activities.

But those I spoke to complained that inflation had cut into their earnings.

"They have allowed the markets to be more active this year," Mrs. Ju explains, saying younger people are now allowed to sell food in the markets, a job previously limited to older women. "But because food prices have gone up, it hasn't made any great difference to us."

Most families have bare cupboards; the U.N. reports finding "no or negligible stock levels" on visits to nearly 100 households. And most North Koreans have nothing to fall back on; their life savings were wiped out — turned to water, as the North Koreans say — in a botched currency redenomination in 2009.

"I was about to go crazy," Mrs. Chon says, remembering the day she had to hand in her savings of 5 million won, which was about $300 at that time. "I didn't know how to continue."

Beggars now haunt the markets, filching food from stallholders when they can. Mrs. Chon says child beggars try to steal the corn noodles she sells three or four times a day.

She says stallholders have learned to wrap their food in layers of plastic bags, to protect it from the beggars.

Beggars have targeted Mrs. Kim, too. Recently, an adult beggar pulled a knife on her, then stole a rabbit from right under her eyes.

Another problem is corruption.

"Government officials need things," one man tells me, "so they take them from the people."

'You Worry All The Time'

For these North Koreans, China is a land of plenty, where everyone can afford to eat rice. Mrs. Ju doesn't hesitate when asked what she'll miss after returning to North Korea.

"To live without worrying about what to eat," she says quietly.

Unending anxiety about how to feed her family fills her every waking moment in the North.

"Every day you wake up in the morning and you wonder what you are going to eat, and you worry all the time," Mrs. Ju says.

"Before I left," recalls Mrs. Kim, "I thought North Korea was the best country in the world. After I came out, I saw this was not true. I was ashamed because it's so poor."

The closed nature of North Korea means that interpreting what's happening there is tricky. Some observers argue that inflation could be progress, a sign of economic liberalization, with prices dictated by the market rather than the state. And the very fact that North Koreans are going abroad legally shows the iron grip of the state is loosening slightly.

But the bad news is that life is actually harder for most ordinary folks — so hard that, for one entire family, death seemed an easier option.