Accessibility links
Kitchen Window: Belgian Sweets Not Just For 'Sinterklaas' Spiced cookies shaped like windmills or villagers mark celebrations of St. Nicholas (or Sinterklaas) — and remind food writer Emily Hilliard of childhood visits with her grandmother. These speculaas even spawned a "cookie butter" that makes a festive base for a decadent pie.

Belgian Sweets Not Just For 'Sinterklaas'

Belgian Sweets Not Just For 'Sinterklaas' 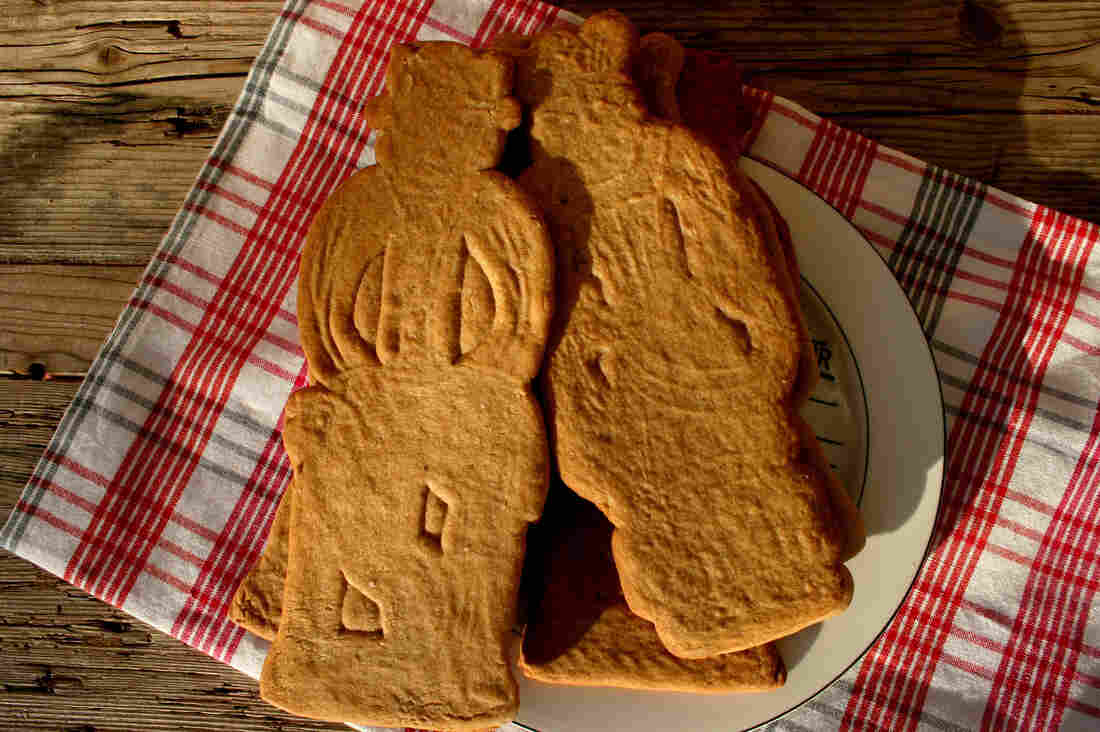 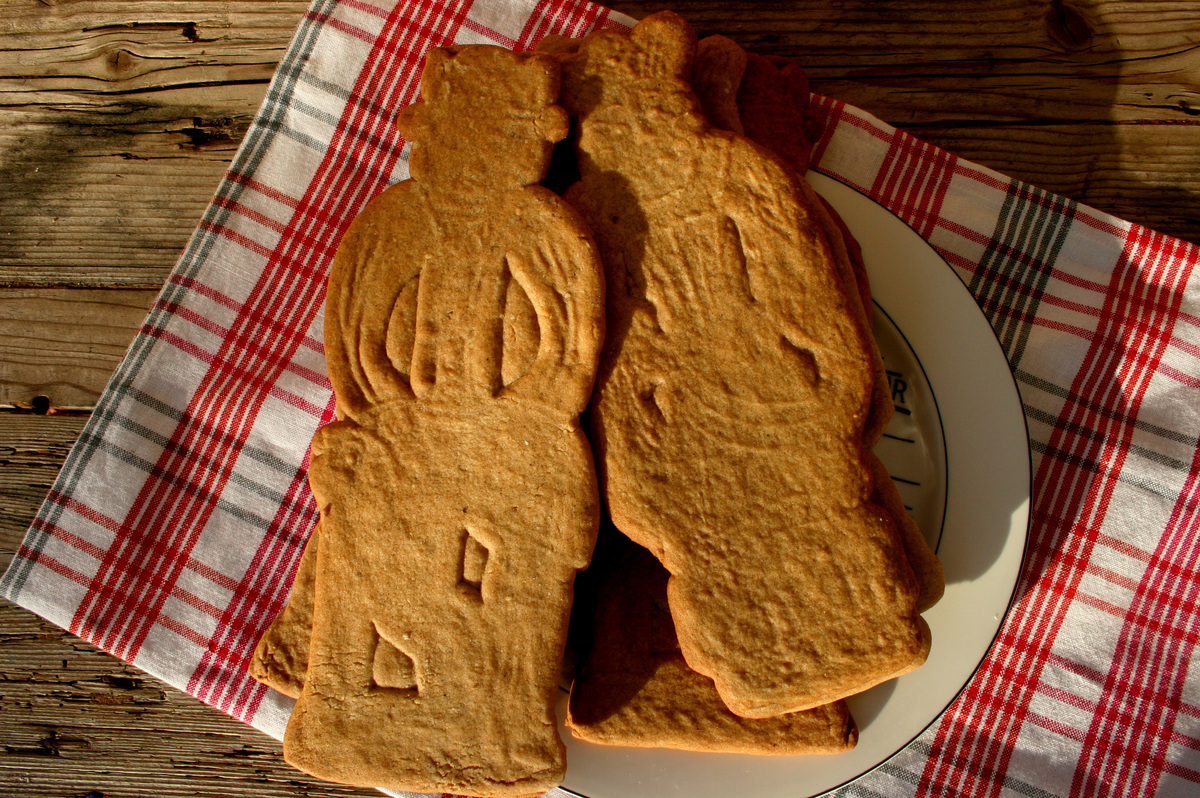 Get recipes for Speculaas Cookies, Speculaas Pie With Chocolate Ganache, Oliebollen and Lukken.

Though my grandmother Georgette was born in the United States, she is half Belgian (Flemish) and half French. On top of the cabinets in her blue kitchen you'll find a little Dutch village of porcelain houses. Above the sink are miniature figures of the Statue of Liberty, Manneken Pis and the Eiffel Tower — representations of her three nationalities. In her Delft cookie jar you'll find speculaas (also called speculoos) — the Dutch windmill-shaped gingersnap-like cookie traditionally eaten on St. Nicholas Day.

Mostly it was about spending time with our grandmother. ... We'd sit at her round dining room table in front of her 1931 Belgian Sinterklaas statue, sip hot chocolate and eat our speculaas.

Although my grandmother has speculaas on hand year-round, St. Nicholas Day, which was last week (Dec. 6), reminded me of our family tradition. We would get together with my grandmother for a little celebration, with gifts from Sinterklaas in our shoes, Belgian chocolates and, of course, her homemade speculaas.

While Sinterklaas may be little known in the United States, its impact is worth considering as we approach Christmas.

St. Nicholas Day is celebrated in Belgium, France, the Netherlands, parts of Germany and in countries that were part of the former Dutch Empire. The holiday is based on Sinterklaas, as he apparently loved children and was fond of giving gifts. Sound familiar? Though St. Nicholas in Sinterklaas lore has taken on a slightly different mystique, he is one of the main sources for Santa Claus here in America.

The original story goes like this: On the eve of St. Nicholas Day, Sinterklaas appears in the village, sometimes by boat, as he is thought to have come from Spain, mounts his white steed and travels from house to house, leaving presents and treats in the shoes of all good children. On his journey, Sinterklaas is assisted by at least one helper (or some say slave): Zwarte Piet, or Black Peter, said to be a Moor, who leaves coal, switches or mean presents in the shoes of naughty children — and in some extreme accounts, kidnaps them and takes them back to Spain. Though in several interpretations, Peter is black because he becomes coated with coal dust on his trip down the chimney, in recent years, the character has been the subject of controversy in the Netherlands for its potentially racist underpinnings and blackface portrayals that occur in some villages. Some modern celebrations, like one in the city of Rhinebeck, N.Y., portray Black Peter as "the Grumpus," a "wild-looking half-man, half-beast character" who does not wear blackface.

Emily Hilliard is a folklorist, writer and baker living in Washington, D.C. She writes the pie blog Nothing-in-the-House and just released the cookbook PIE. A Hand Drawn Almanac with illustrator Elizabeth Graeber.

In my family's celebration, though, there was no Black Peter — I didn't learn of the figure until I studied it later. There was a vague representation of Sinterklaas as a benevolent and generous figure, but mostly it was about spending time with our grandmother, who in effect was our own personal Sinterklaas, fond of children and giving gifts. She would have a small gift for us, sometimes placed in our shoes, and we'd give her an ornament, which usually had a representation of a boy and girl — my brother and me. We'd sit at her round dining room table in front of her 1931 Belgian Sinterklaas statue, sip hot chocolate and eat our speculaas.

I recently asked my grandma if she celebrated Sinterklaas as a girl growing up in South Bend, Ind. I was surprised when she said no, not really. Though her parents were proud of their heritage — they were members and frequent guests of the Belgian Club in town where they played Belgian bowling and won archery contests — they also tried hard to be "American." My grandma said it was something she had memories of from other Belgian and Dutch classmates, but not from her own home.

So it was a tradition that our family introduced later, after my mom read about it. She thought it would be a nice celebration for my brother and me — and for our grandmother, the genealogist of the clan, who always had a longing for our Belgian family and lost tradition. It became a way for us to connect with our grandmother and great-grandparents, our heritage and culture, as we so often do through food.

Speculaas are Belgian/Dutch gingersnap-like cookies traditionally eaten on St. Nicholas Day. They are made with large, single cookie molds, most popularly formed in the shape of windmills, but other traditional versions include representations of villagers, royalty and animals. Speculaas molds can be purchased online or at a Dutch import store. If you don't have a cookie mold, you can still make speculaas using any cookie cutter. 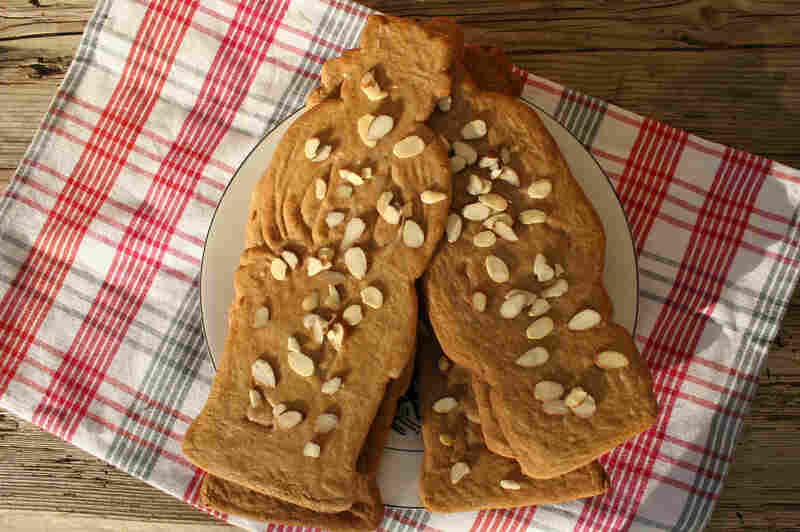 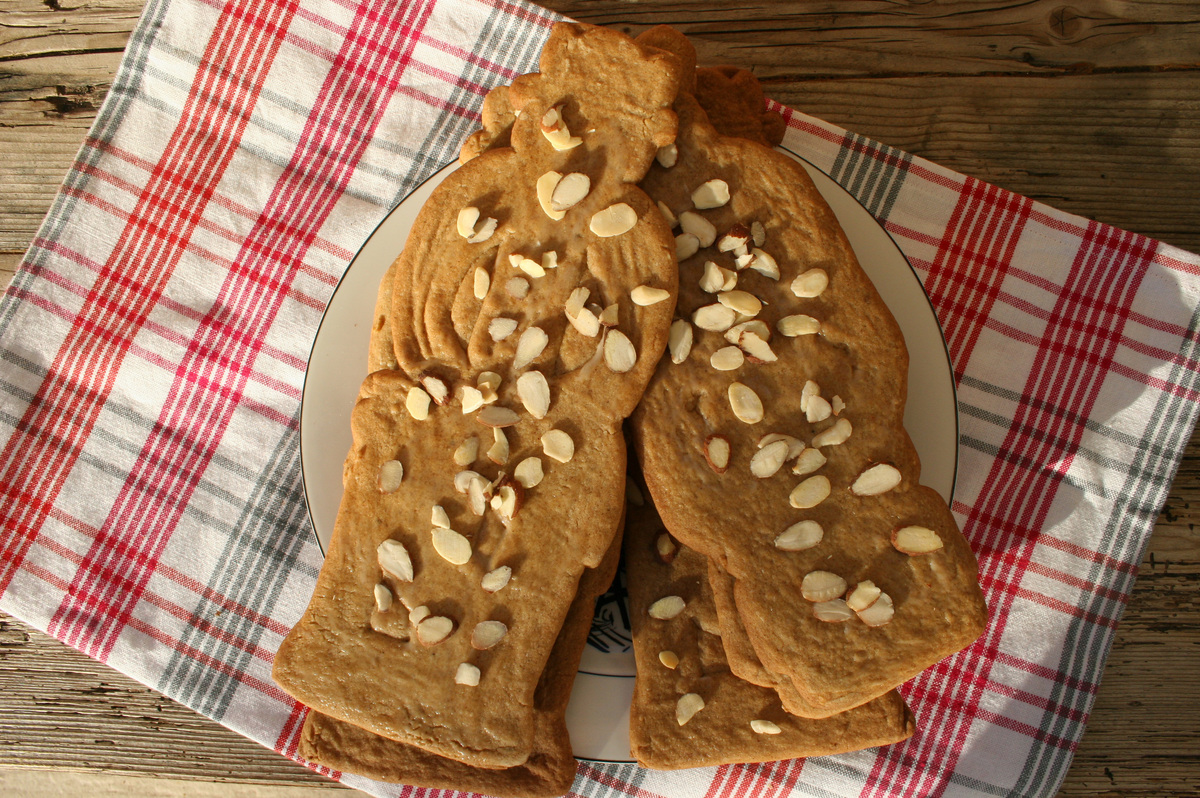 In the bowl of a standing mixer, cream butter and both sugars until light and fluffy. Add vanilla. Add the beaten eggs, one at a time, and mix until everything is well combined. 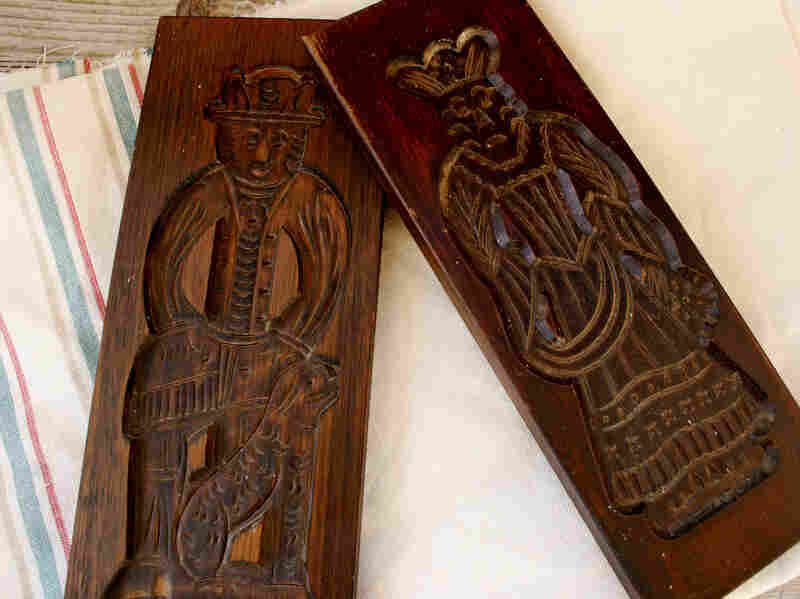 You may use special molds for making speculaas, or any type of cookie cutter. Emily Hilliard for NPR hide caption 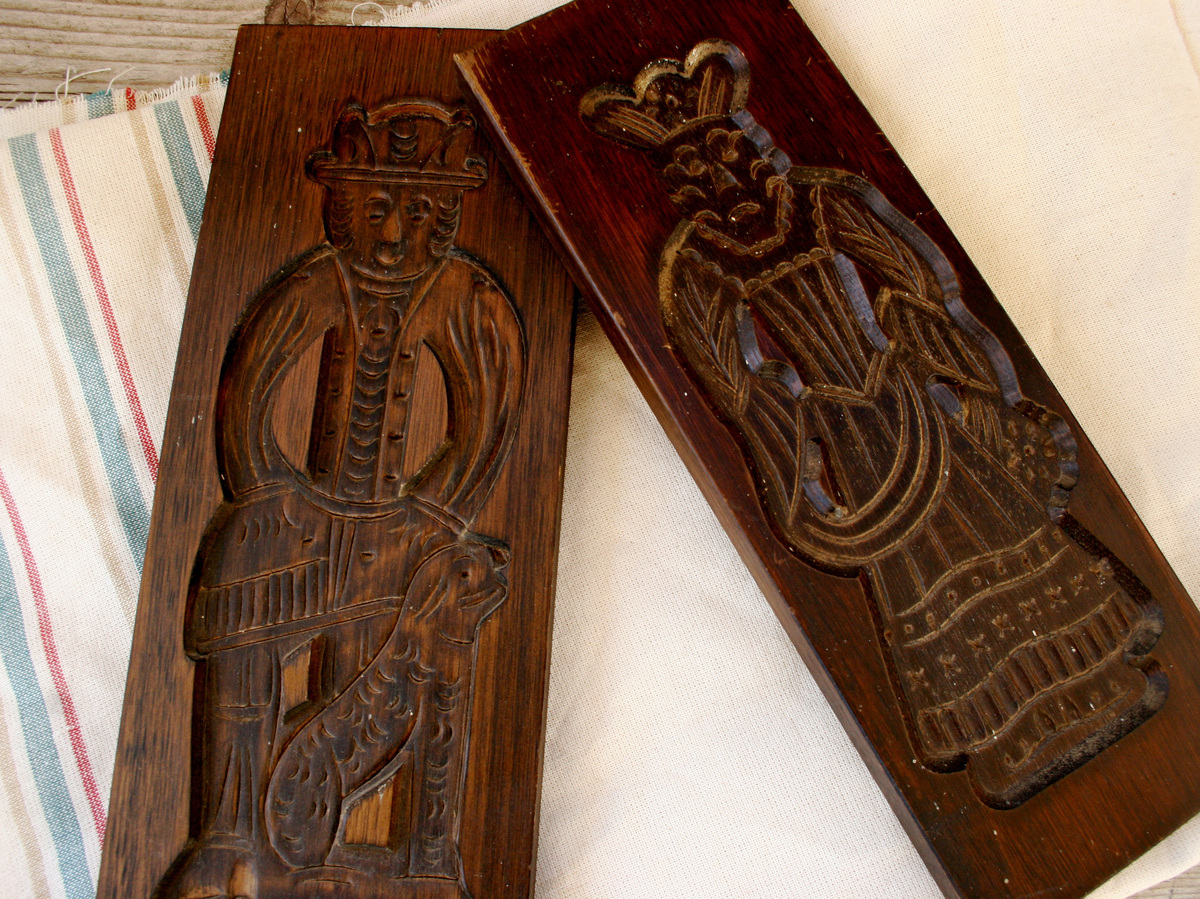 You may use special molds for making speculaas, or any type of cookie cutter.

In a large bowl, whisk together flour, almond meal, baking soda, spices and salt. Gradually add the dry ingredients into the butter mixture, beating until well combined. Form the dough into 2 equal portions, wrap in plastic wrap and refrigerate overnight.

On a clean, floured surface, roll out a portion of dough into a large circle about 1/4-inch thick. Cut the dough with a cookie cutter or form into a well-oiled and floured speculaas cookie mold. (Continue working with the portions of dough, recombining scraps and refrigerating between batches if necessary, until all of the dough has been cut or shaped into cookies.)

Place cookies on a cookie sheet lined with parchment paper and bake 10 to 15 minutes, or until cookies are browned and slightly crispy. While the cookies cool, melt the 2 tablespoons of butter. Brush butter on the top of each cookie and sprinkle with the sliced almonds. Enjoy with coffee or tea.

Speculaas will keep in a covered tin for up to 5 days.

In 2007, the winning invention on the Belgian television show De Bedenkers (The Inventors) was a spread of peanut butter consistency made from ground-up speculaas cookies. The winner teamed up with the popular Belgian cookie brand Lotus to commercially produce Speculoospasta, or Speculoos Cookie Butter, as it's known in the United States. It's become wildly popular there and here, with Trader Joe's producing its own version. This pie uses Speculoos Cookie Butter as the base for the filling, a take on tradition. 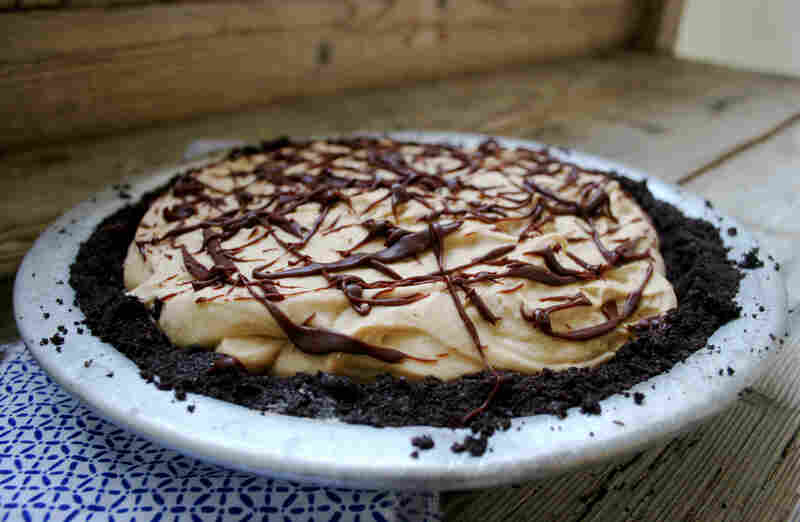 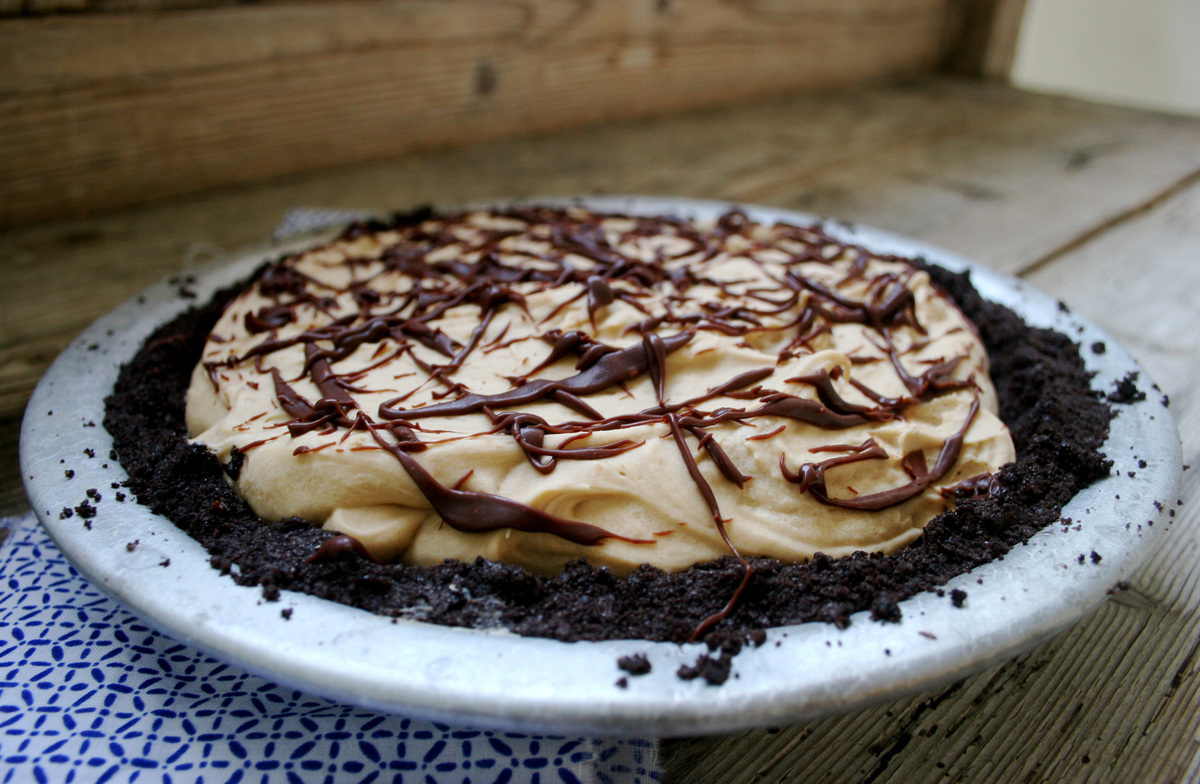 Preheat oven to 350 degrees. Pulse cookies in food processor until they form fairly fine crumbs. Mix in melted butter until well incorporated. Pat filling into a 9- or 10-inch pie plate. 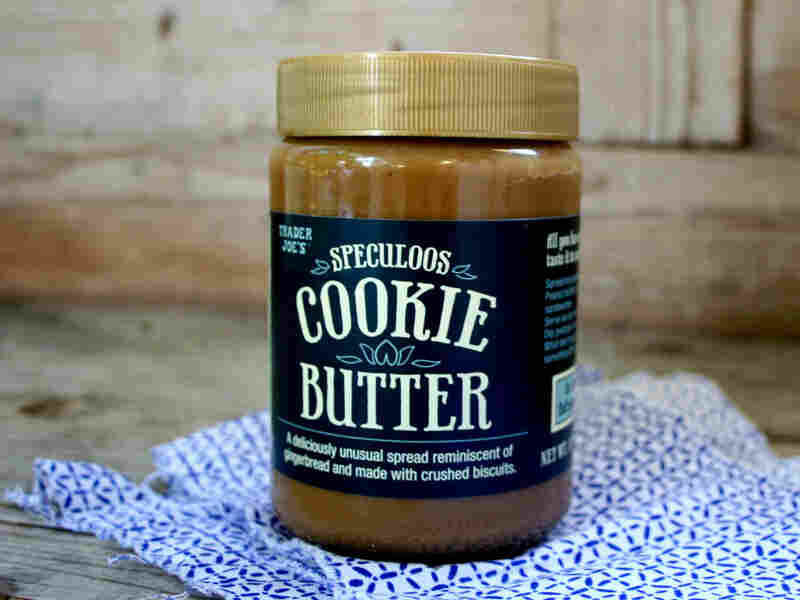 Speculoos Cookie Butter can be found at stores like Trader Joe's and online. (An online search for recipes for homemade versions turns up some interesting options, too.) Emily Hilliard for NPR hide caption 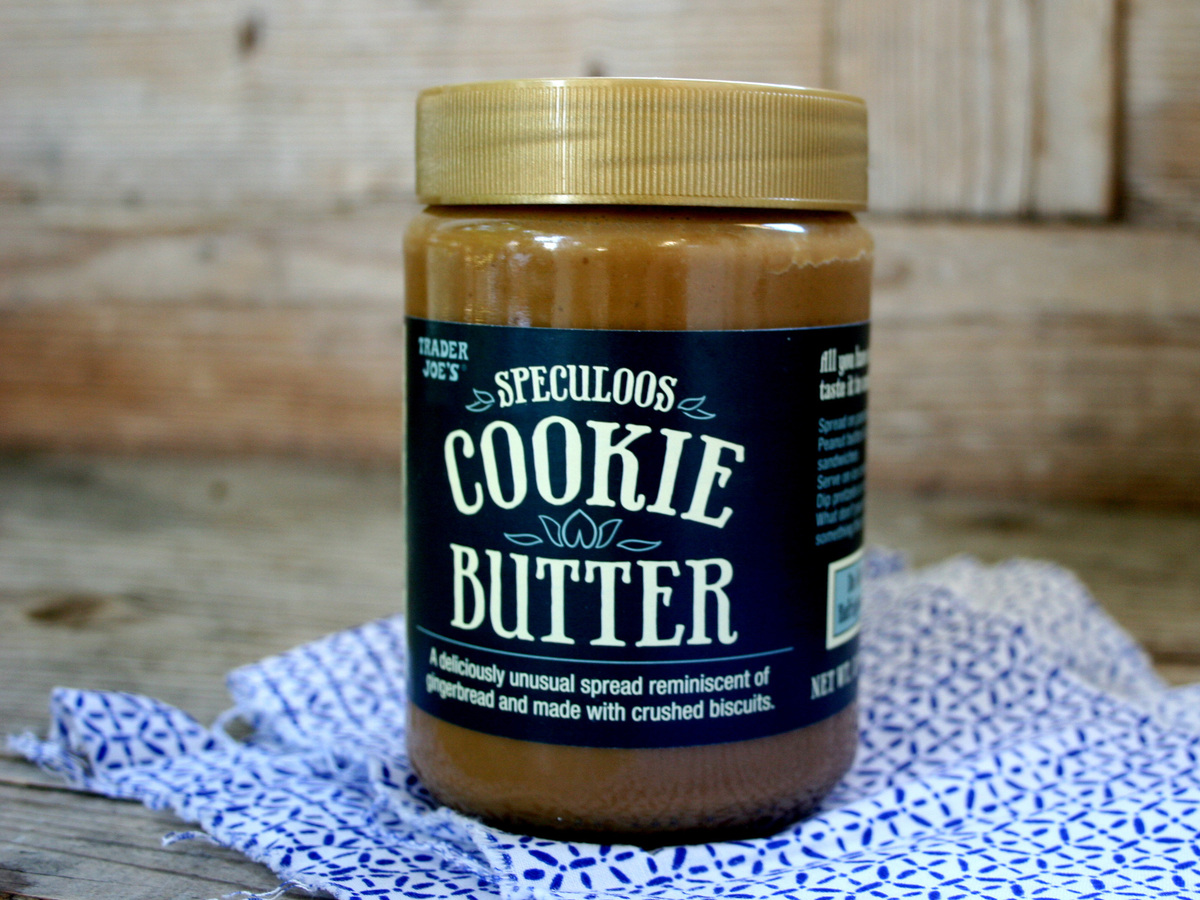 Speculoos Cookie Butter can be found at stores like Trader Joe's and online. (An online search for recipes for homemade versions turns up some interesting options, too.)

Bake crust about 7 minutes, until crumbs become slightly crisp. Let cool, then put in the freezer while making filling.

In a bowl, mix cream cheese and 1/2 cup powdered sugar using a hand mixer, about 1 minute. Add cookie butter and beat until fluffy, about 3 minutes (continue even once it's combined so filling gets fluffy).

In a separate bowl, beat whipping cream, vanilla and 2 tablespoons of powdered sugar until stiff peaks have formed — 3 to 4 minutes. Starting with 1/3 of the whipped cream mixture, fold the whipped cream into the cookie butter mixture.

Once it's combined, add the remaining whipped cream to the cookie butter mixture, folding gently until thoroughly mixed. Pour the mixture into the cookie crust. Freeze pie for about 20 minutes. Meanwhile, make the chocolate ganache.

Into the top of a double boiler, put chocolate, sugar, heavy cream and salt. In the bottom of the boiler, put 2 cups of water. Place over medium heat until mixture is melted, glossy and thick.

Drizzle ganache over chilled pie and place in freezer at least 1 hour. Remove pie from freezer about 20 minutes before serving and serve while still slightly chilled.

Oliebollen, translated as "oil balls," are a Belgian/Dutch yeasted doughnut, traditionally eaten on New Year's Eve. They often contain currants or apples and are dusted with confectioner's sugar. This recipe is adapted from Maurice Vande Moortel's recipe in The Belgian Cookbook (McClellan & Stewart, 1970). Oliebollen also are a popular street food. 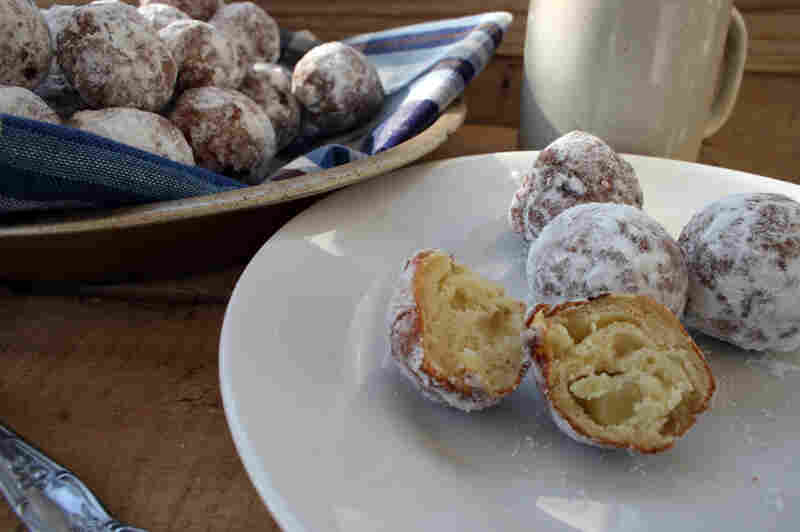 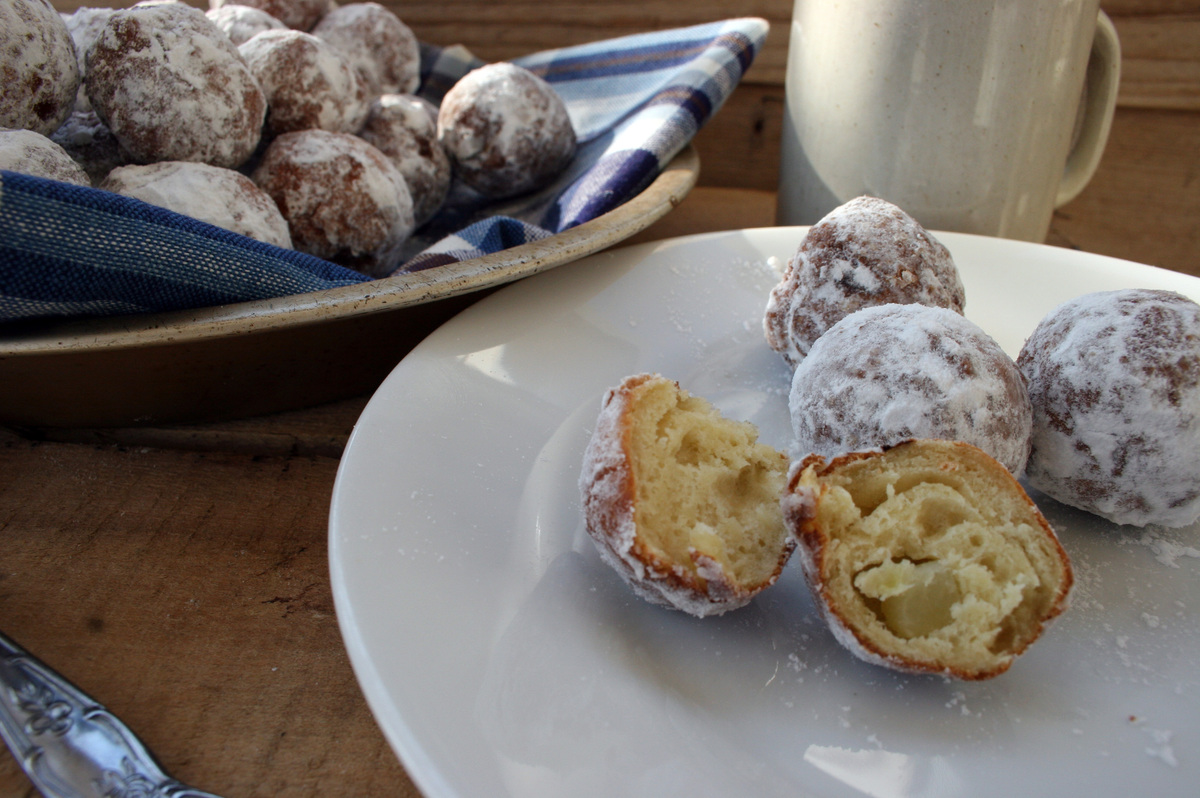 Vegetable oil for frying, about 4 cups

In a medium saucepan, scald milk. Remove from heat and stir in sugar, salt and butter. Pour mixture into the bowl of a standing mixer fitted with the dough hook (or if you don't have a mixer, in a large bowl) and let cool to lukewarm. Add the yeast to the milk mixture and mix to incorporate.

Add egg to the yeast mixture and combine. Add the chopped apples and half the flour to the mixture, beating on low or kneading until smooth. Add remaining flour and mix or knead until well incorporated.

Form dough into a large ball and transfer to a lightly oiled bowl. Cover with plastic wrap or a dishcloth and let sit in a warm place until doubled in size, 1 to 2 hours. With floured hands, beat down the dough and then form into balls about the size of golf balls. Place them on a cookie sheet lined with parchment paper and let chill in the refrigerator for at least 1 hour and up to overnight.

When ready to fry, in a large pot with high sides, heat oil on low to 375 degrees. Drop balls into oil and fry until golden brown, 1 to 2 minutes each. Remove from oil using a slotted spoon and transfer to a plate lined with paper towel. Roll oliebollen in powdered sugar and enjoy.

Lukken, also called Nieuwjaar's wafeltjes (literally, New Year's waffles), are a Belgian waffle cookie, like oliebollen, enjoyed on New Year's. Lukken comes from the word geluk, translated as "good luck." To make them, you'll need a lukken iron, or another cookie iron, such as a pizelle maker. I found that lukken also are excellent paired with another Belgian dessert, La Dame Blanche, a type of hot fudge sundae. I made my Dame Blanche with lukken, cinnamon bourbon ice cream and hot fudge sauce made with Belgian chocolate. This recipe is adapted from that of my grandmother Georgette Harding. 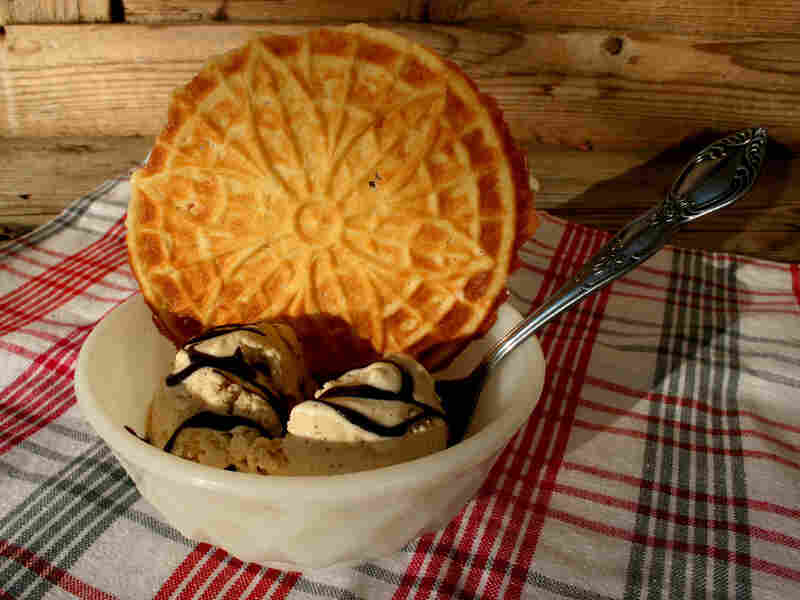 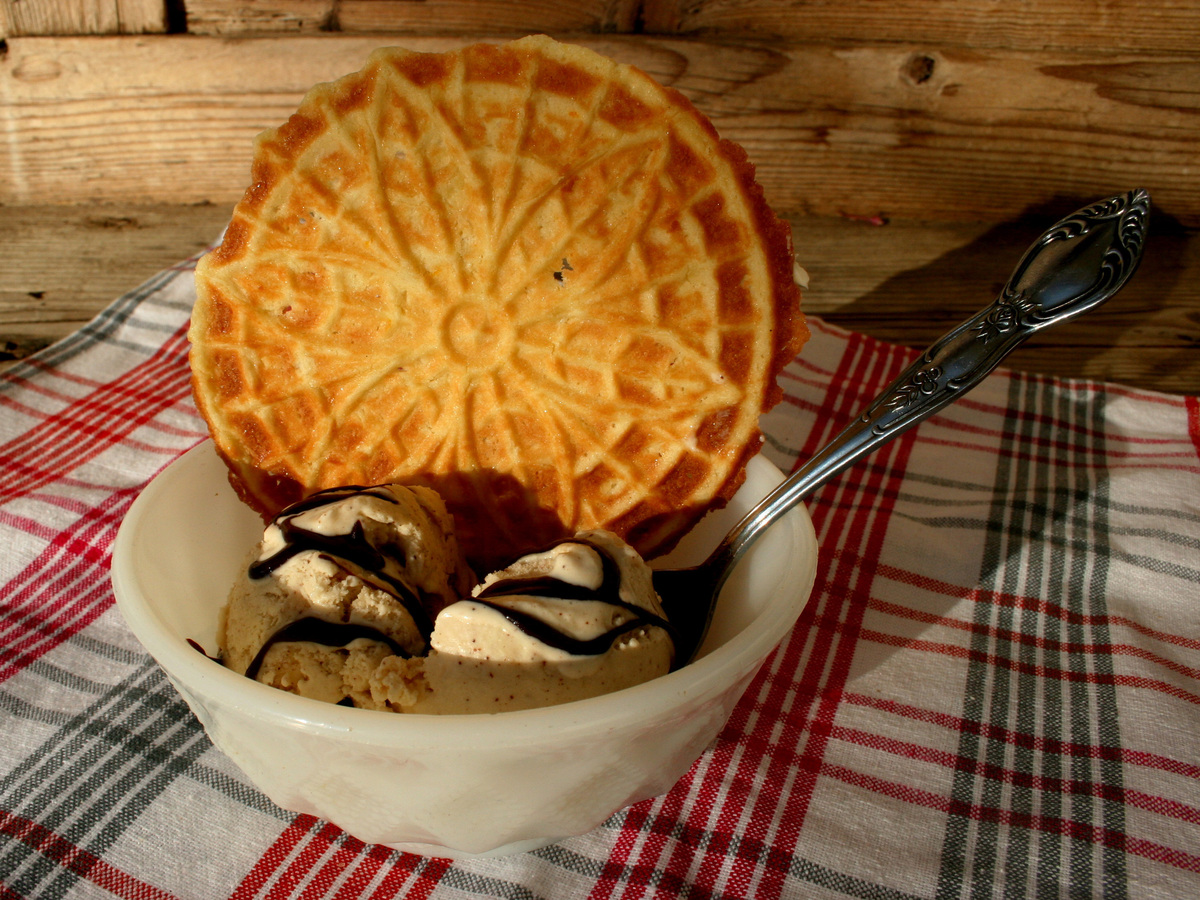 Melt butter and let cool to room temperature. In the bowl of a standing mixer, pour melted butter and add eggs, beating lightly.

Add both sugars, salt, whiskey, vanilla and orange zest, beating well to combine. Add flour in small increments and mix well. Wrap dough in plastic wrap and refrigerate at least 2 hours and up to overnight.

Remove dough from refrigerator and heat up lukken or pizzelle iron. Roll dough into 1-tablespoonful balls and flatten. Place flattened discs on the cookie iron, close and bake 20 to 30 seconds. Remove cookies with a spatula and let cool on a wire rack. Enjoy lukken with ice cream or by themselves.