Accessibility links
Movie Reviews - 'The Hobbit: An Unexpected Journey' - An Unhurried Adventure For Bilbo Baggins Peter Jackson takes his audience back to Middle-earth in The Hobbit: An Unexpected Journey, set in a time before the Lord of the Rings films. NPR's Bob Mondello says that where the Rings films struggled with what to omit, The Hobbit labors to justify its three-hour running time. 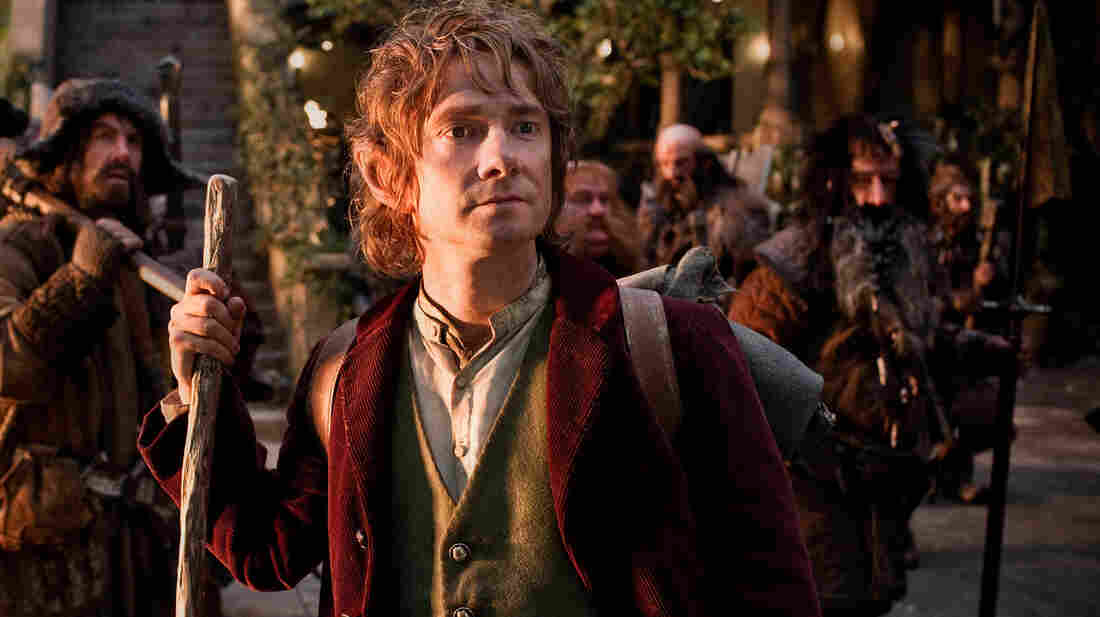 The Hobbit: An Unexpected Journey

The Hobbit's path to the screen may have started out as tortuous as a trek through the deadly Helcaraxe, filled with detours (Guillermo del Toro was initially going to direct), marked by conflict (New Zealand labor disputes) and strewn with seemingly insurmountable obstacles (so many that the filmmakers threatened to move the shoot to Australia).

But with Peter Jackson's Lord of the Rings trilogy having taken in almost $3 billion at the box office, there was never any real doubt that J.R.R. Tolkien's remaining Middle-earth fantasy would ultimately become a film — or, as it happens, three of them.

In that sense, The Hobbit: An Unexpected Journey isn't "unexpected" at all, though between its lighter tone and a decade's worth of improvements in digital film techniques, there should be enough of a novelty factor to delight most fans.

After a sequence that recounts the eviction of the dwarves from their Lonely Mountain kingdom by the treasure-coveting dragon Smaug, Jackson takes us to the Shire, 60 years before the Rings cycle. Frodo's adopted Uncle Bilbo, played by LOTR's Ian Holm in a framing sequence and by a smartly cast Martin Freeman thereafter, is a comparative youngster, while Gandalf (Ian McKellen) looks as old as the New Zealand hills.

"I'm looking for someone," says the wizard, "to share in an adventure."

Bilbo says no way, but that night, dwarfs start showing up at his door. First one, who eats his dinner; then another, who raids his pantry; then lots more. They are a boisterous bunch — not seven dwarfs, but 13, all with alarming facial hair and all hell-bent on taking back their homeland — right after they 1) get acquainted, 2) have dinner, 3)attend to some paperwork and 4) sing a couple of songs.

You'll sense that there's a bit of padding going on here. Although Tolkien's novel The Hobbit, or There and Back Again, is shorter than any one of the three books that make up Lord of the Rings, it's being turned all by itself into three new movies. So where the challenge in LOTR was to condense and reduce and condense again, the challenge here is to include every syllable, plus an appendix or two to boot.

In this first film — which covers just six book chapters in close to three hours — the filmmakers are reduced to detailing troll recipes and staging a hedgehog rescue. They also, happily, make much of an encounter with the one little dude who makes any trek to Middle-earth worthwhile: Gollum.

Actor Andy Serkis plus motion-capture still equals the most memorable character in all of 21st century film. Here, though the surrounding story tends toward boisterous high spirits befitting the material's origins in a child-friendly book, Gollum is insidious — even dangerous. The high-stakes game of questions he plays with Bilbo is the one moment when this movie can't be dismissed as Lord of the Rings-lite. 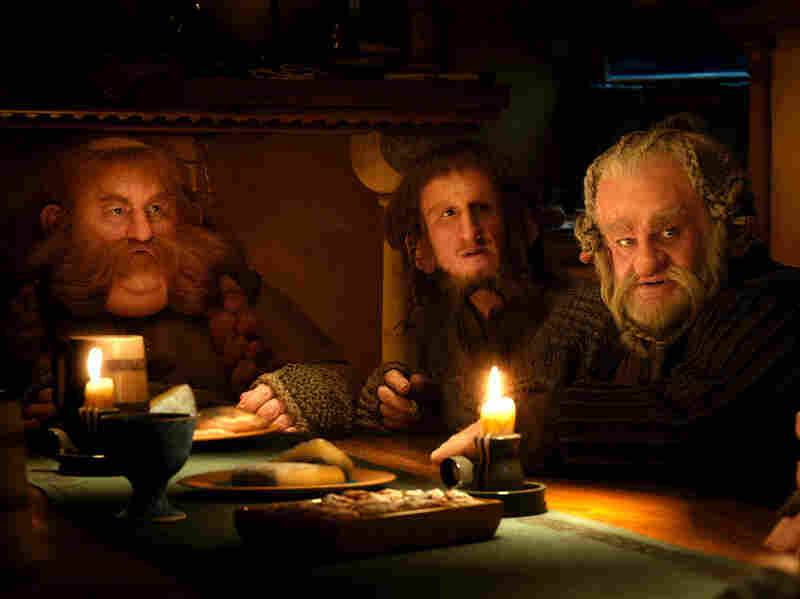 Still, even if it's mostly technology this time rather than story that's providing the depth, there is a new feel to reckon with. Director Jackson takes to 3-D like an orc to battle, turning an escape from a cave full of goblins into a plunge inside a Rube Goldberg contraption — the camera soaring one way as our heroes careen another, across spindly wooden bridges that sway and collapse in a choreographed frenzy. Waves of goblins swinging in on ropes get turned into pinwheels, giant logs become pinball flippers flicking them right and left, all in a new process that doubles the number of frames per second, making even the fastest action clear, smooth and stutter-free.

Does that high frame rate also make slower scenes look too real — not orcs and dwarfs, but actors in makeup? Well, if you're worried about that, you have a record six viewing options for The Hobbit: the usual standard format and 3-D format, plus IMAX and 3-D IMAX, the new high-frame-rate 3-D, and high-frame-rate 3-D-IMAX. So you can choose how "realistic" you want your fantasy world.

Just remember that all that's really required for willing suspension of disbelief is an army of the willing. An army that is already, a day before the opening, lining up at your local multiplex.