Accessibility links
New York Planners Prep For A 'New Normal' Of Powerful Storms In the wake of Superstorm Sandy, New Yorkers, local politicians and scientists face a tough decision: How to spend limited funds to defend themselves in a world where climate change is making flooding from coastal storms ever more likely. 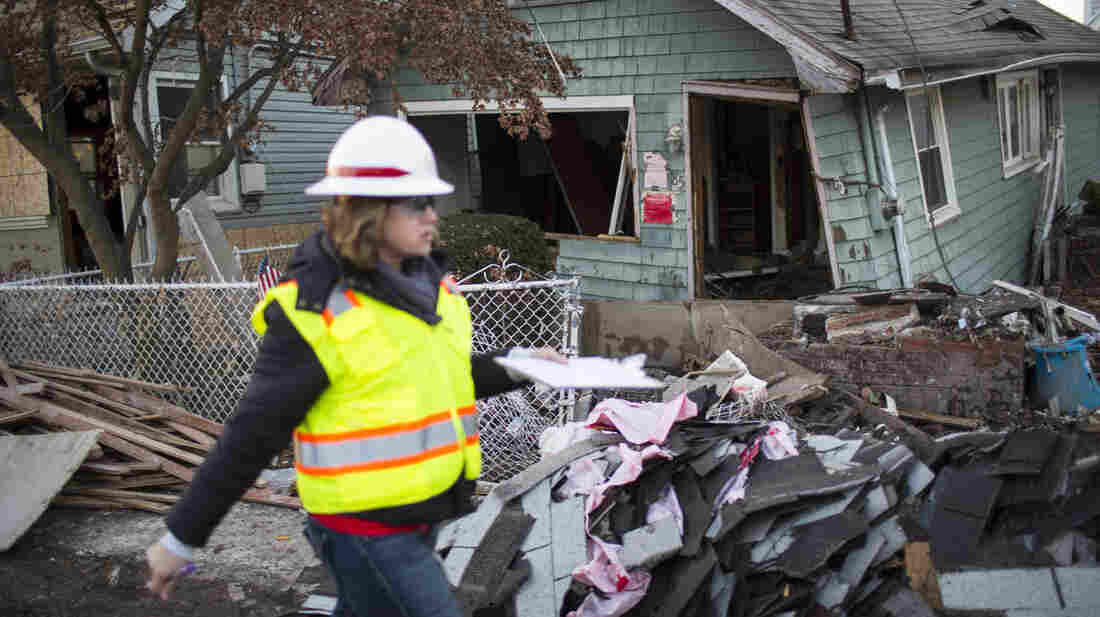 It will take tens of billions of dollars to repair the damage wrought by Superstorm Sandy. But scientists who study climate change say repair is not enough. As the climate warms, ice sheets and glaciers will melt, raising the sea level. That means coastal storms will more likely cause flooding.

So New Yorkers, local politicians and scientists face a tough decision: How to spend limited funds to defend themselves from what climate experts call "the new normal."

New York City faces the Atlantic Ocean like a chin waiting to be hit, and Sandy stepped up and whacked it. And there will be more storms like Sandy.

"Storms today are different," says Jane Lubchenco, who heads the National Oceanic and Atmospheric Administration, which includes the National Weather Service. "Because of sea level rise, the storm surge was much more intense, much higher than it would have been in a non-climate changed world."

Even garden-variety storms may someday heave water up to your doorstep. So the question now is: How to prepare for the next big one?

Some things are a given. You can see this as you drive through Staten Island's shore neighborhoods. Many of these houses are a coin toss above sea level. Sandy knocked one-story bungalows off their foundations and flooded the rest.

Repair crews go from house to house, cutting up soggy flooring and hauling away debris. Green and yellow stickers on the front doors tell a story: Yellow means the house isn't habitable; green means it's OK. Marit Larson, with the city's parks and recreation department, says most of the OK ones were built after the late 1990s, when building codes changed. 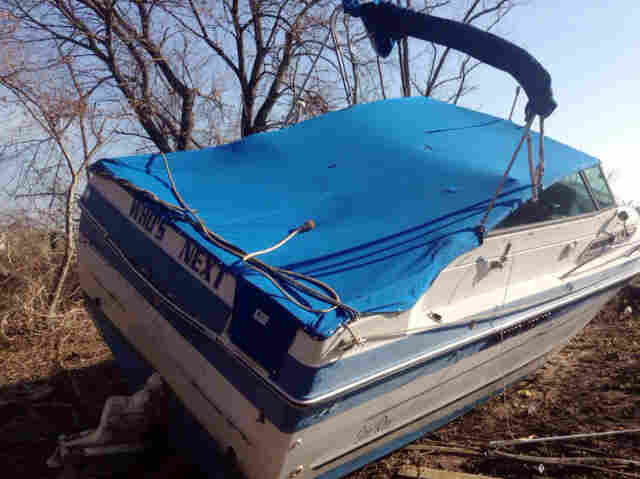 Who's Next? A boat displaced by Hurricane Sandy was dropped on Staten Island. Because of sea level rise, the storm surge was more intense than it would have been in a non-climate changed world, NOAA Administrator Jane Lubchenco says. Christopher Joyce/NPR hide caption 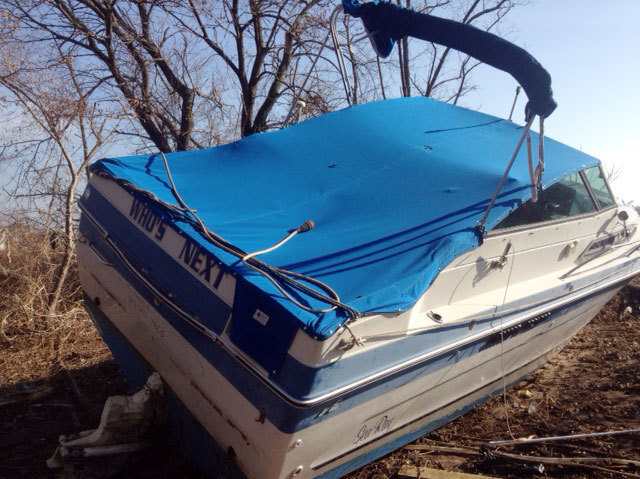 Who's Next? A boat displaced by Hurricane Sandy was dropped on Staten Island. Because of sea level rise, the storm surge was more intense than it would have been in a non-climate changed world, NOAA Administrator Jane Lubchenco says.

"Zoning codes required that no utilities were in the basement," she says. "Electrical and gas, heating — whatever utilities they had, had to be built on the second floor."

In between houses you can see wetlands — tall reeds and twisted trees in standing water. Larson says normally they slow runoff from rainstorms. But Sandy's 10-foot-high surge overwhelmed them.

"Just simply the amount of water that came in and inundated these people's property — that couldn't be held back by these wetlands," Larson says. She says wetlands could be useful for future storms, however, if you put them in the right place and make them big enough.

Along a beach, for example, wetlands help blunt the energy of incoming waves. But you need more. At this beachfront community, the beach is flat and narrow — not much help.

Engineer Franco Montalto of Drexel University says it could be "nourished" — built up with sand or sediment to create dunes that hold back the water.

"And the evidence seems to be that places that had rehabilitated beaches suffered less damage than places that didn't," Montalto says.

For years, the Army Corps of Engineers has built sand dunes along East Coast beaches. Although many got swept away by Sandy, they're relatively cheap to rebuild. It's the kind of defense that Montalto calls "green infrastructure." He says the green strategy has multiple benefits.

"You know, a beach nourishment project could have value in terms of protecting houses, it could add habitat and could sort of enhance the value of this beach," Montalto says.

New York is seeking about $10 billion to prepare for the next big storm. Some experts, like Montalto, say you get more bang for your buck with a "distributed" defense — dunes, wetlands, bigger stormwater culverts, even urban parks that slow down the flow of water. They're cheaper and designed to fit the needs of a particular community.

But city officials are contemplating plans to build huge sea walls — across the mouths of the Hudson and East rivers, for example, and even one from New Jersey to New York. Each would cost $6 billion or more.

"The only thing that barriers do is prevent storm surges," he says. "Now that's wonderful. It would have taken care of Sandy and will take care of future storm surges up to a point."

That point being when sea levels rise enough to push a storm surge over the top of the sea wall. Since no one knows how high levels will go, a sea wall could become obsolete in a few decades.

Moreover, a sea wall is open most of the time to let traffic through. So as the ocean rises, it will raise the river level, too.

"So now we have barriers. The sea level rise still goes wherever it wants to go," he says.

Jacob isn't against sea walls, but he says the city needs to figure out ways to live with higher sea levels and flooding, even if that means abandoning some flood zones.

Cynthia Rosenzweig, a climate scientist at NASA's Goddard Institute for Space Studies, says most New Yorkers have reached a tipping point on the subject of climate change.

"The evidence is indeed piling up that climate change is no longer something that is happening in future decades, and everyone's eyes are glazing over as the scientists are talking about it," she says.

Rosenzweig co-authored a report that looked at the costs and benefits of preparing the city for climate change. It calculated that $1 of prevention saves $4 in future repairs.

"If we're going to be having this much damage again and again, our whole economy of our region will not be able to survive," she says.

And as former New York Mayor Ed Koch once said, "New York City is where the future comes to rehearse."