Accessibility links
A Sweet Bread, A Wash Basin And A Shot Of Whiskey As part of All Things Considered's Found Recipes series, cookbook duo the Brass Sisters share a friend's memories of his mother's Portuguese Sweet Bread. Her tradition involved a big enamel basin, a nip of whiskey and a little prayer that the bread would turn out right. 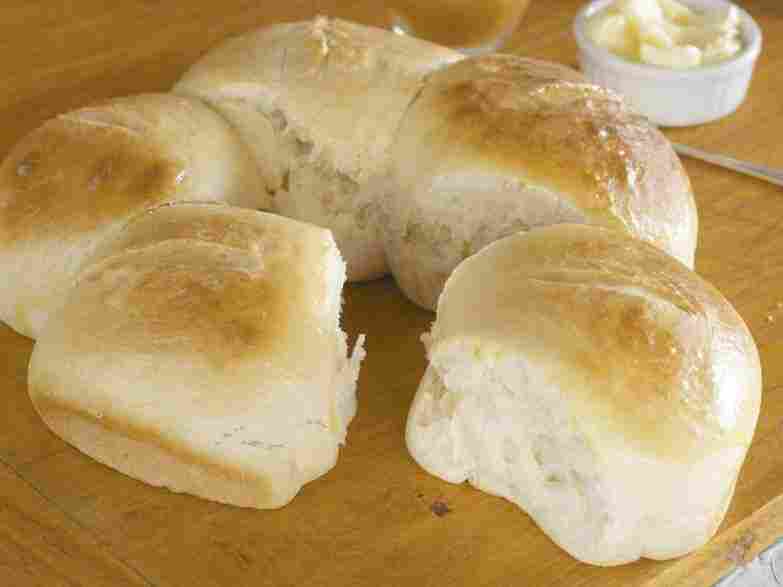 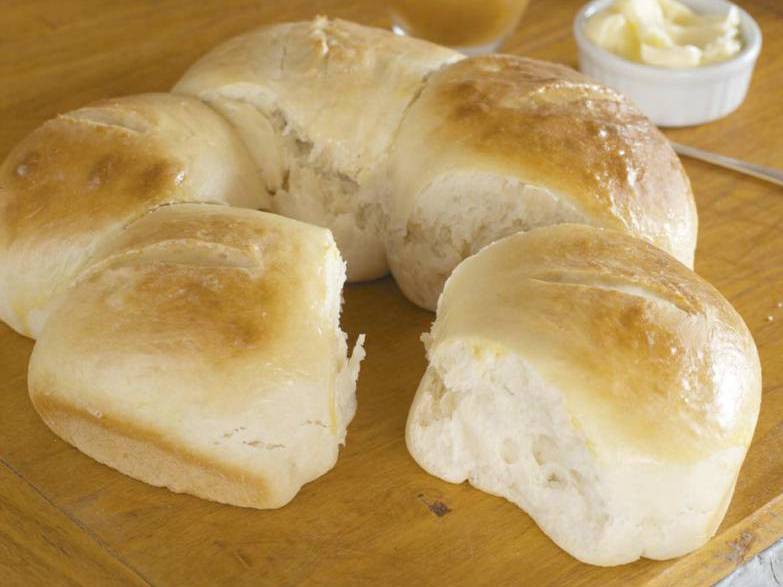 For the holidays, why not give a gift that tastes like a cloud? Portuguese Sweet Bread may be as close as you can get, according to Marilynn Brass, one-half of the cookbook duo the Brass Sisters.

Marilynn and her sister Sheila — co-authors of Heirloom Baking with the Brass Sisters — collect stories as well as recipes. On Thursday's All Things Considered, they explain that the story that goes with this airy treat, recounted to them by their friend David Lima, is a keeper. They shared the recipe and story for All Things Considered's Found Recipe series.

Like all the girls in her family, Virginia Lima, born on one of Portugal's Azores islands in the early part of the 20th century, was taught how to make bread. As a wife and working mother living in Providence, R.I., in the 1950s, she kept the tradition alive every holiday by making loaves of her Portuguese Sweet Bread.

Lima's youngest child, David, liked to keep her company in the kitchen. He offers the following details about her technique: Mrs. Lima would take a large, enamel basin — big enough to wash a small child in — and tie it to a red metal step stool with a rope. That's where she'd mix her dough by hand. No electric mixer.

She'd activate the yeast in a separate bowl, then measure out her flour into the basin. As she mixed the liquid into the dough, she'd add an interesting ingredient — two teaspoons of whiskey. She'd then cross herself and say a prayer that the bread would come out right and nourish all who ate it. She'd knead and pound for a long time, then take a break and pour a little whiskey into a shot glass to reward herself.

Once the bread was baked, she'd give the loaves to family and friends as an act of love and remembrance for the souls of the departed.

Sometimes David would get her to make dinner rolls shaped like doughnuts or tied in knots. They'd always eat the bread just as it was, David told the Brass Sisters. He never tried toasting it until he was an adult.

Eventually, the Brass Sisters tried Virginia Lima's recipe for themselves. "The scent was heavenly," Sheila recalls, "and the taste was like the best French brioche, with sugar added."

Mrs. Lima would make up to seven loaves in her huge washbasin, but the Brass Sisters have adapted her recipe for a smaller yield. And, in a touch that's sure to please many, they also increased the amount of whiskey.

Set the oven rack in the middle position. Preheat the oven to 350 degrees. Coat two 9-inch cake pans with vegetable spray or butter.

Warm milk in microwave for 40 seconds on low. Set aside.

Dissolve yeast in warm water. Add 1 tablespoon of the sugar and set in a warm place to proof, about 10 minutes. Mixture will bubble when yeast is proofed.

Mix 5 1/2 cups of the flour, 1 cup of the sugar and the butter and salt in the bowl of a standing mixer fitted with the paddle attachment. Add eggs. Add yeast mixture and whiskey or lemon extract. Add up to 3/4 cup milk gradually, continuing to work the dough. If dough continues to be sticky, add remaining 1/2 cup flour until dough firms up. Change to the dough hook and continue to knead for 5 minutes at medium speed.

Butter a large bowl. Place dough in bowl and turn it so that all surfaces have a film of butter. Put in a warm place and allow to rise until double in size, about one hour.

Punch down dough and divide in half. Shape into 2 rounds, using a little flour if necessary. Place in cake pans and let rise for 30 minutes. Make slit on top. Brush with beaten egg. Bake 40 to 45 minutes, or until crust is golden brown. Cool on rack. Slice bread with a serrated knife. Store in a plastic bag when completely cool.