Accessibility links
Cheat Sheet Or Open Book: Putting Tests To The Test Afshin Gharib, a psychology professor at Dominican University of California, prefers to give open-book tests. His colleague William Phillips lets students use cheat sheets. After several arguments about the techniques, they decided to conduct an experiment to find out which method works best. 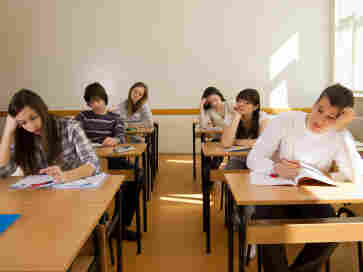 Some professors prefer giving students open-book tests so they all have the same access to information. Others believe letting the students prepare cheat sheets yields better results. iStockphoto.com hide caption

Afshin Gharib and William Phillips are associate professors of psychology at the Dominican University of California. They are also carpool buddies.

On drives to and from work, they used to argue over what kind of exams work best to test student knowledge, encourage retention and keep stress low.

Gharib decided to change his traditional, closed-book testing style about 10 years ago. He got tired of curving exam scores and decided to try out the open-book style.

"At first I thought that everybody would get an A," Gharib tells NPR's Neal Conan, "but oddly enough, the scores were normally distributed and not that much higher than on a closed-book, closed-note test."

Though the test results didn't change, the students seemed much happier, so Gharib chose to stick with the open-book style.

"But whenever I drive with [Phillips]," Gharib says, "we have an argument and Bill disagrees with me."

Phillips typically allows students to create a cheat sheet as an aid for exams, based on the idea that the process of creating the aid actually increases learning.

To settle the debate once and for all, they did what researchers do: They ran an experiment.

The professors used a couple of their classes to put the question to the test. During the course of one semester of introductory psychology and statistics classes, they gave one open-book exam, one cheat sheet exam and one closed-book test.

In his statistic class, Phillips only used the cheat sheet and open-book methods, so that students didn't have to memorize all of the formulas.

As for Phillips' belief that the process of organizing a cheat sheet helps students with learning and preparation, the experiment proved that to be incorrect. Though Phillips says students spent more time studying and preparing for cheat-sheet exams, there was no correlation between the detail of the aid and the scores.

The professors also found that the style of testing does not influence retention rates.

"We gave a pop quiz about a couple of weeks after each of the tests," Gharib says, "and we found the scores were pretty much exactly the same in both classes ... regardless of the type of test the students are prepared for."

Gharib and Phillips would be interested to see if these trends apply across the board. "Introduction to psychology and statistics are as different pair of classes as we could find," Gharib says. "So we think that it's pretty broadly applicable."

The Student Makes The Difference

"And that, I think, was a really interesting finding — that, in a way, the type of exam really makes very little difference."

So, as for the drive to work, this particular argument is settled for now.

Phillips will be doing the driving, at least for a while.