Accessibility links
Families Of Spain's 'Stolen Babies' Seek Answers — And Reunions More than 1,000 people have gone to court hoping to track down sons and daughters or brothers and sisters they were told died in childbirth during the Franco dictatorship. The mothers were often poor and had Marxist leanings. Some estimates put the total number of stolen babies as high as 300,000. 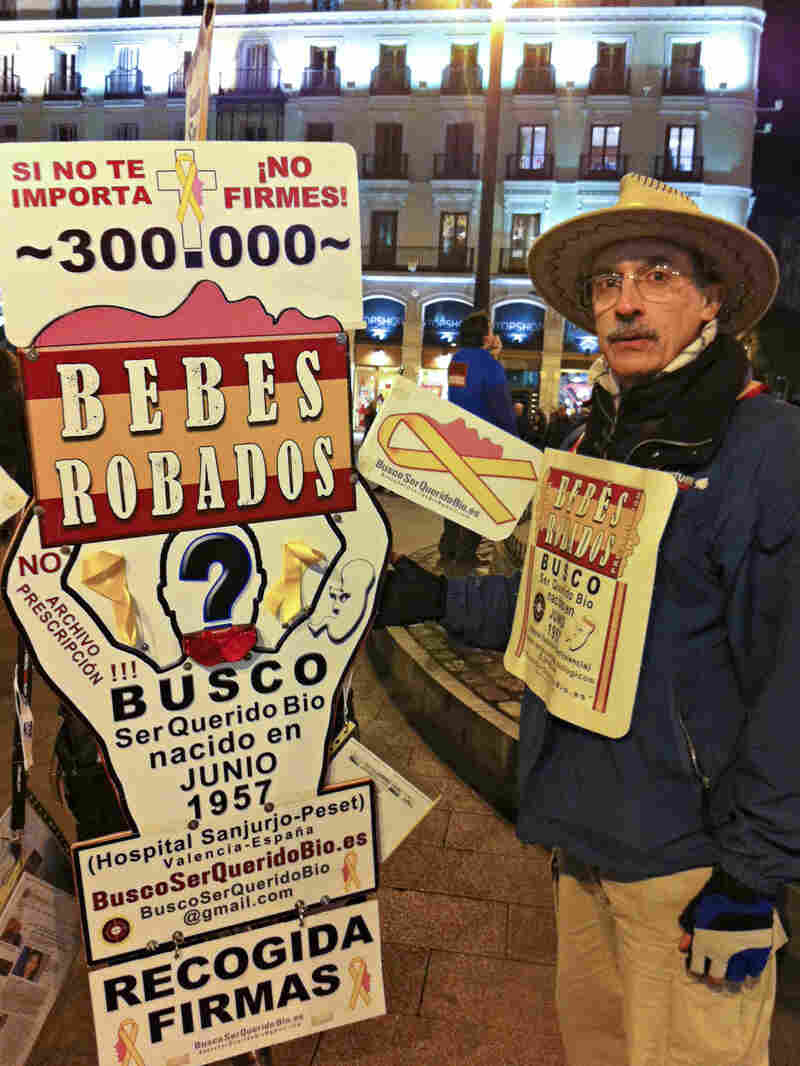 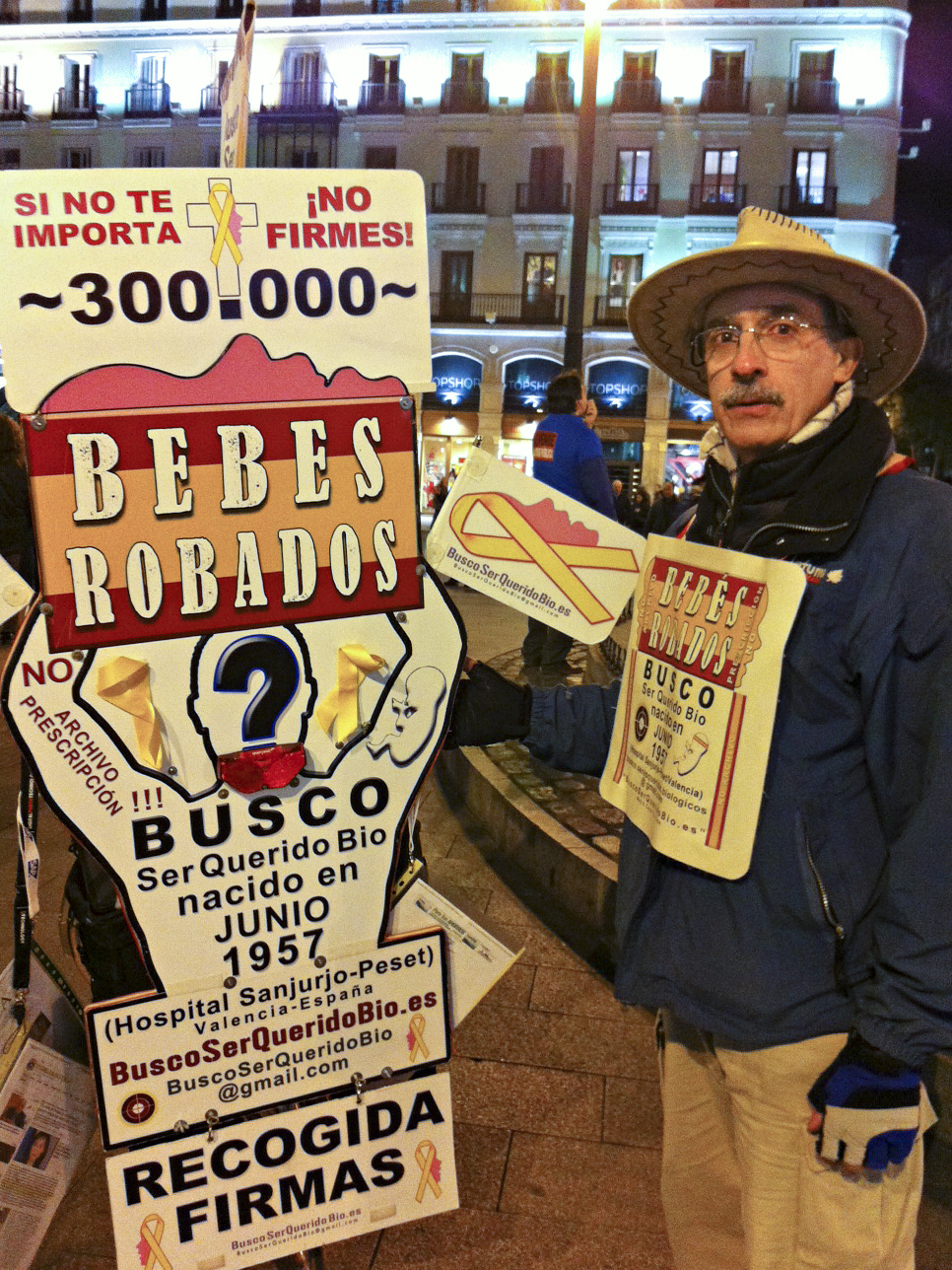 Allegations of the existence of a secret network of doctors and nuns who stole newborn babies and sold them for adoption are reviving a dark chapter in Spain's recent history.

More than 1,000 people have gone to court hoping to track down sons and daughters or brothers and sisters they were told died in childbirth.

In Madrid's Puerta del Sol square last month, Antonio Iniesta stood next to a poster with the words bebes robados (stolen babies). His demonstration is intended to publicize his search for a brother he's convinced is alive.

Iniesta tracked down his mother's 1957 hospital record and shows its conflicting handwritten remarks: One says a male child was stillborn; the other refers to his family's "social distortion."

He says it means "a state of poverty that can damage the physical and emotional well-being of the child." His family, Iniesta says in an interview with NPR, was poor.

Roots In The Franco Era

The theft of newborns began with the Franco dictatorship in 1939. It came to light three years ago after former Spanish Judge Baltasar Garzon investigated the abduction of children taken forcibly from women imprisoned because they were leftists. He estimated that by 1950, the number of abducted babies had reached 30,000.

Journalist Natalia Junquera says the baby theft was an attempt at social engineering by Antonio Vallejo-Najera, a psychiatrist trained in Germany in the 1930s. Vallejo-Najera considered the mothers to be dangerous because, Junquera says, he thought "those women had inside the seed of Marxism, and if those children remained with their mothers, the Marxism [would] grow in those children."

The system outlived Franco's death in 1975 and continued at least through the 1980s. Some estimates put the total as high as 300,000 stolen babies.

The guiding principle was that the child would be better off raised by an affluent, conservative and devout Catholic family, who would also pay up to $25,000 at today's rates.

"To steal a baby you needed a doctor willing to do it, and also a nun," Junquera says. "They were acting like they were gods, deciding who deserved a child and who didn't."

One of the few nuns to speak publicly is Sister Josefa Garcia Veiga, director of Barcelona's Santa Isabel residence for single women.

Interviewed on the TV documentary Devolvedme A Mi Hijo (Give Me Back My Child), Garcia Veiga denied that babies were forcibly taken from their mothers. She said she was bound by an oath and could not hand over medical records that could help one woman trace her biological mother to help treat a rare hereditary disease.

"I cannot reveal anything," she said in the documentary produced last year. "We cannot break a pact made with the mother even for health reasons."

This year the first formal charges were filed, against one nun.

In April, an investigating magistrate heard testimony in the case of Sister Maria Gomez as a crowd of women outside the courthouse shouted, "Where is my child?"

Gomez, 80, denies charges of involvement in the 1982 disappearance of Pilar Alcalde.

Last year, thanks to Facebook and lots of luck, Alcalde was reunited with her biological mother. Her case opened the floodgates — memories of strange behavior in maternity wards resurfaced; families became detectives.

Radio Te Encontrare (We Will Meet) is dedicated to stolen children. As more and more listeners call in to the program to tell their stories, a pattern emerges: poor, often unmarried mothers not allowed to see their newborns, and many graves exhumed but found to be empty.

It was founded by Vicente Olaya, a business reporter at El Pais. His mother, like many others, never believed her baby girl died at birth.

"My sister die[d] in the hospital, but my mother never saw her," Olaya says. "It's very amazing, because there is no body. There is no tomb of my sister. There is no archive because they say the nuns destroyed all the archives in [the] '80s."

That's the biggest challenge in the search for long-lost relatives: Many hospital records have been destroyed.

Until 1970, parents could register adopted children as their own. The first adoption law wasn't passed until 1987, so it's hard to find one's biological mother.

"Time is an enemy of the investigation," says Eduardo Esteban Rincon, the Madrid prosecutor handling some 300 cases of alleged stolen babies. "We're as frustrated as those looking for missing relatives."

The more than 20 associations seeking stolen children have joined forces under the banner They Are All Our Children. The umbrella group is not only seeking justice, but also wants to set straight a long-hidden historical record.