Accessibility links
50 Years After First Interplanetary Probe, NASA Looks To Future Mariner 2's 1962 mission to Venus was the first time any spacecraft had gone to another planet. Before the mission, very little was known about the planets, and much of what was believed to be true turned out to be wrong. 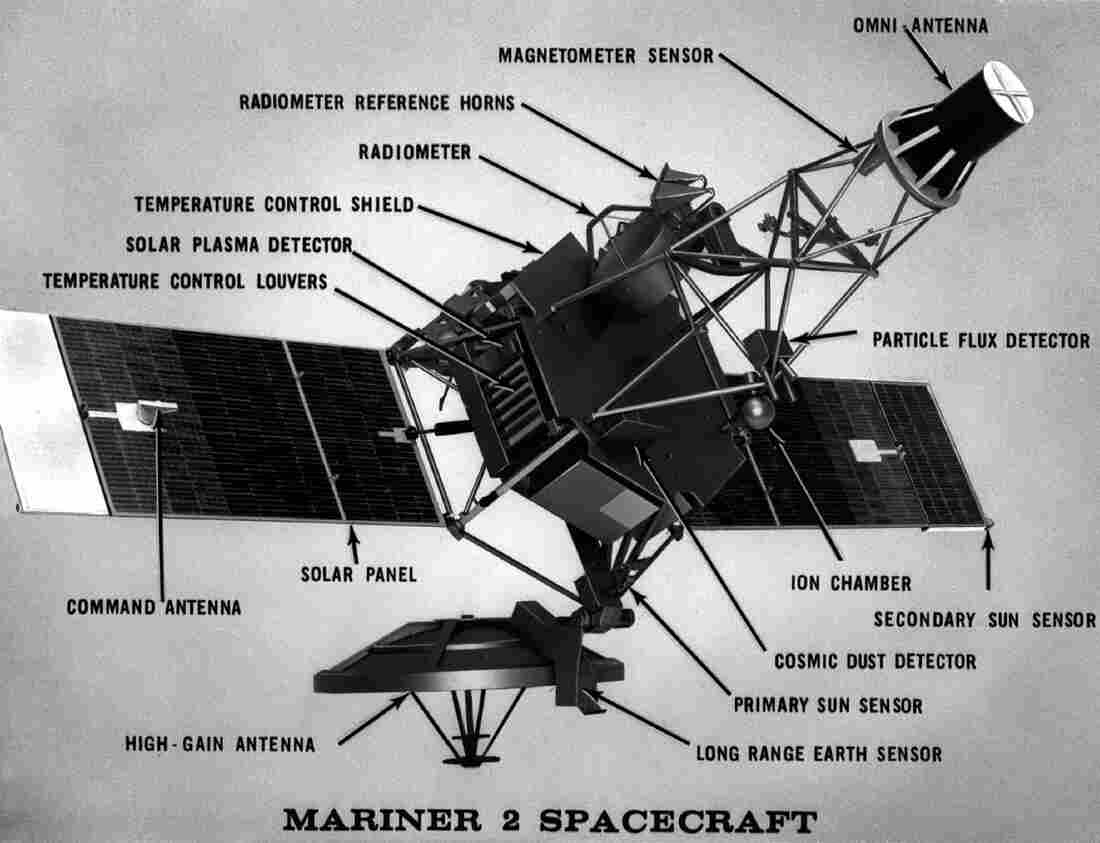 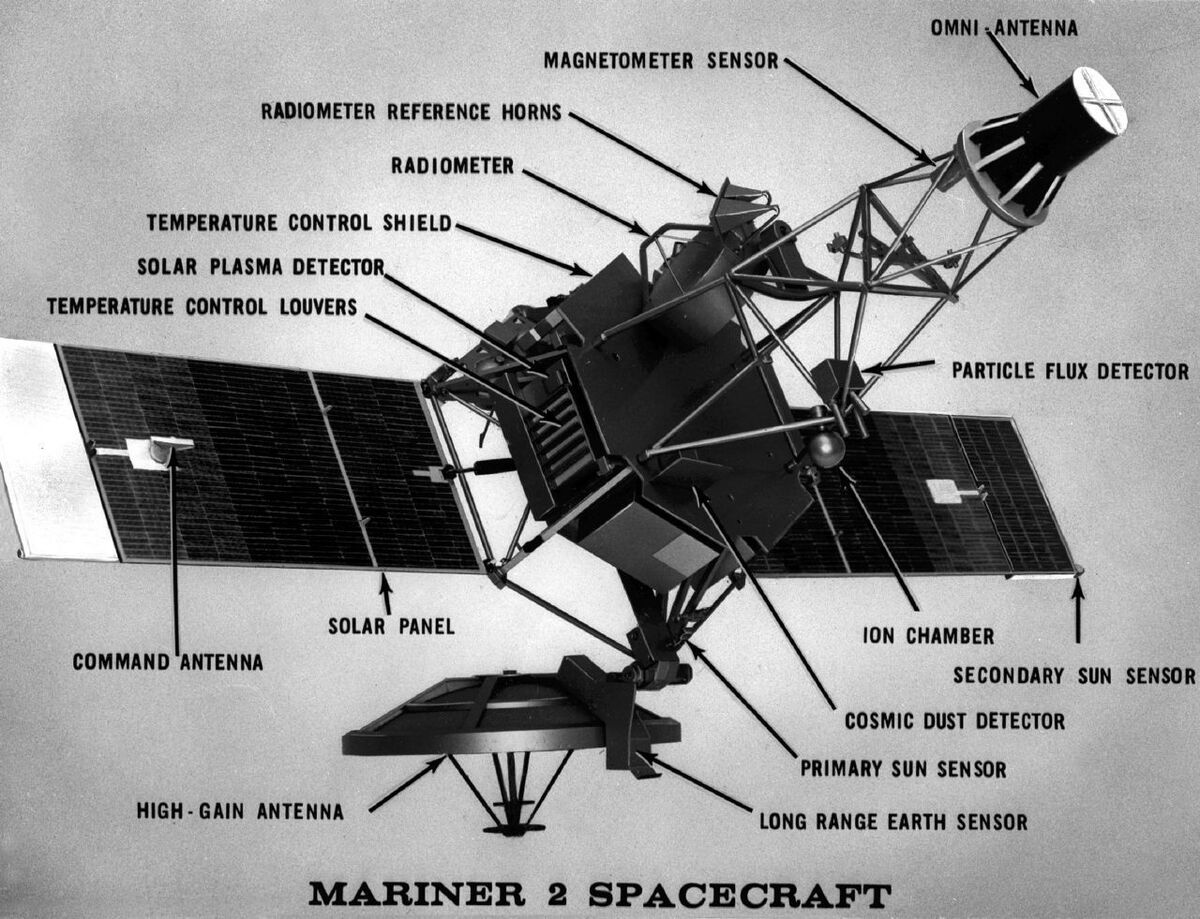 Fifty years ago, on Dec. 14, 1962, reporters gathered for a press briefing at NASA headquarters and heard an unearthly sound: radio signals being beamed back by a spacecraft flying within 22,000 miles of Venus.

This audio is from a Dec. 14, 1962, press briefing during which live signals from the spacecraft were played for the assembled reporters.

The Mariner 2 mission to Venus was the first time any spacecraft had ever gone to another planet.

These days, vivid photographs showing scenes from all around the solar system are so ubiquitous that people might easily forget how mysterious our planetary neighbors used to be.

"The planets were all known to exist by the Mariner 2 mission in 1962, but very little was known about them, and much of what was believed to be true about them turned out to be wrong," says Erik Conway, a historian at NASA's Jet Propulsion Laboratory, which built the Mariner 2 spacecraft.

Scientists back then could only study the planets through telescopes. And Venus, seen through a telescope, was entirely shrouded by opaque clouds. No one knew what might be on the surface.

"Venus was generally believed, especially in the public, to be kind of a warmer Earth," says Conway. "It would be something like a Mesozoic jungle age, maybe even with dinosaurs. " 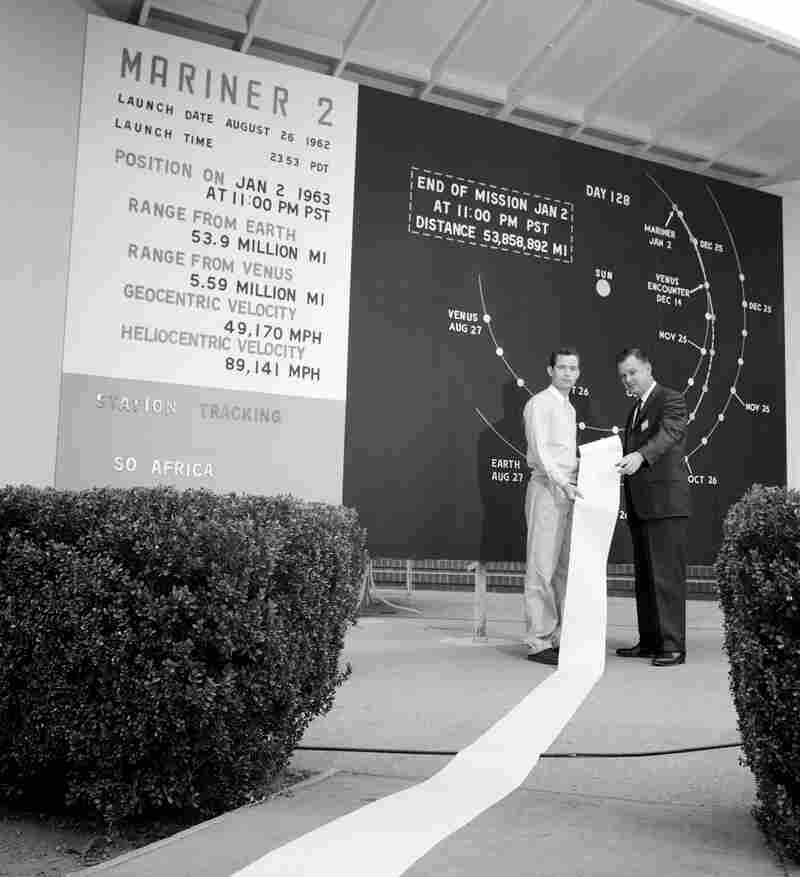 Scientists show off reams of data collected by Mariner 2 as it passed by Venus. The probe flew by the planet on Dec. 14, 1962, and scanned the surface for 42 minutes. NASA/JPL hide caption 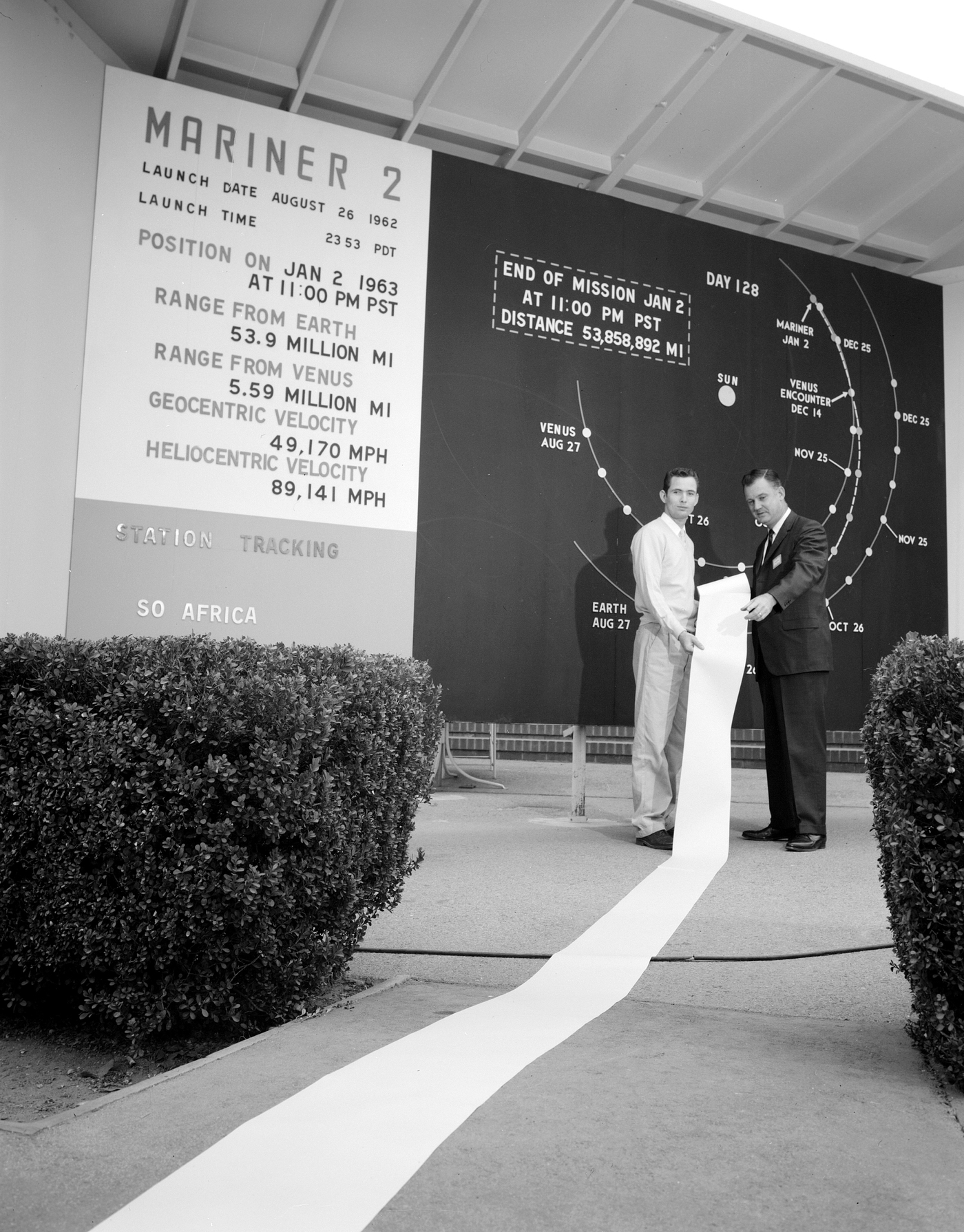 Scientists show off reams of data collected by Mariner 2 as it passed by Venus. The probe flew by the planet on Dec. 14, 1962, and scanned the surface for 42 minutes.

The Mariner 2 mission was a part of the space race, which started in 1957 with the launch of the Soviet Sputnik satellite. The Soviets were aiming for the moon, but they also were working to send a probe to Venus. So NASA did, too — even though a lot of people thought the idea was crazy. After all, Venus was 36 million miles away, and the trip would take more than three months.

"There was considerable skepticism in places like NASA headquarters itself that you could actually make a spacecraft that would live long enough to get to another planet," Conway says.

On July 22, 1962, a hastily built spacecraft called Mariner 1 was sitting on top of a rocket in Florida. It was equipped with instruments that would let scientists get new information about the temperature, magnetic field and mass of Venus.

But during the launch, the rocket veered off course; safety officers ordered it to self-destruct.

Luckily, the engineers had built a spare probe — Mariner 2. One month later, it took off. This launch also had glitches, but the rocket somehow righted itself, and Mariner 2 was on its way. 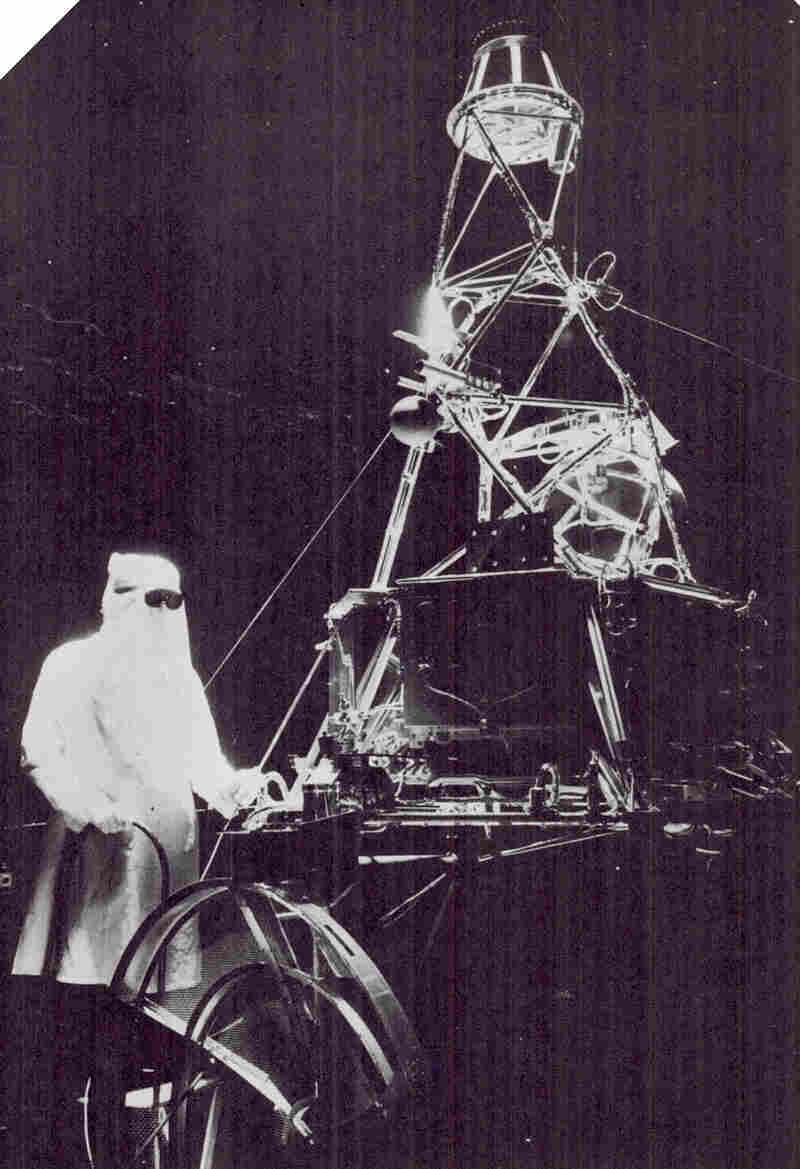 A technician wears a hood and protective goggles while working with a full-scale model of the Mariner spacecraft in a space simulator chamber at the Jet Propulsion Laboratory in Pasadena, Calif., in 1962. NASA/JPL/Caltech hide caption 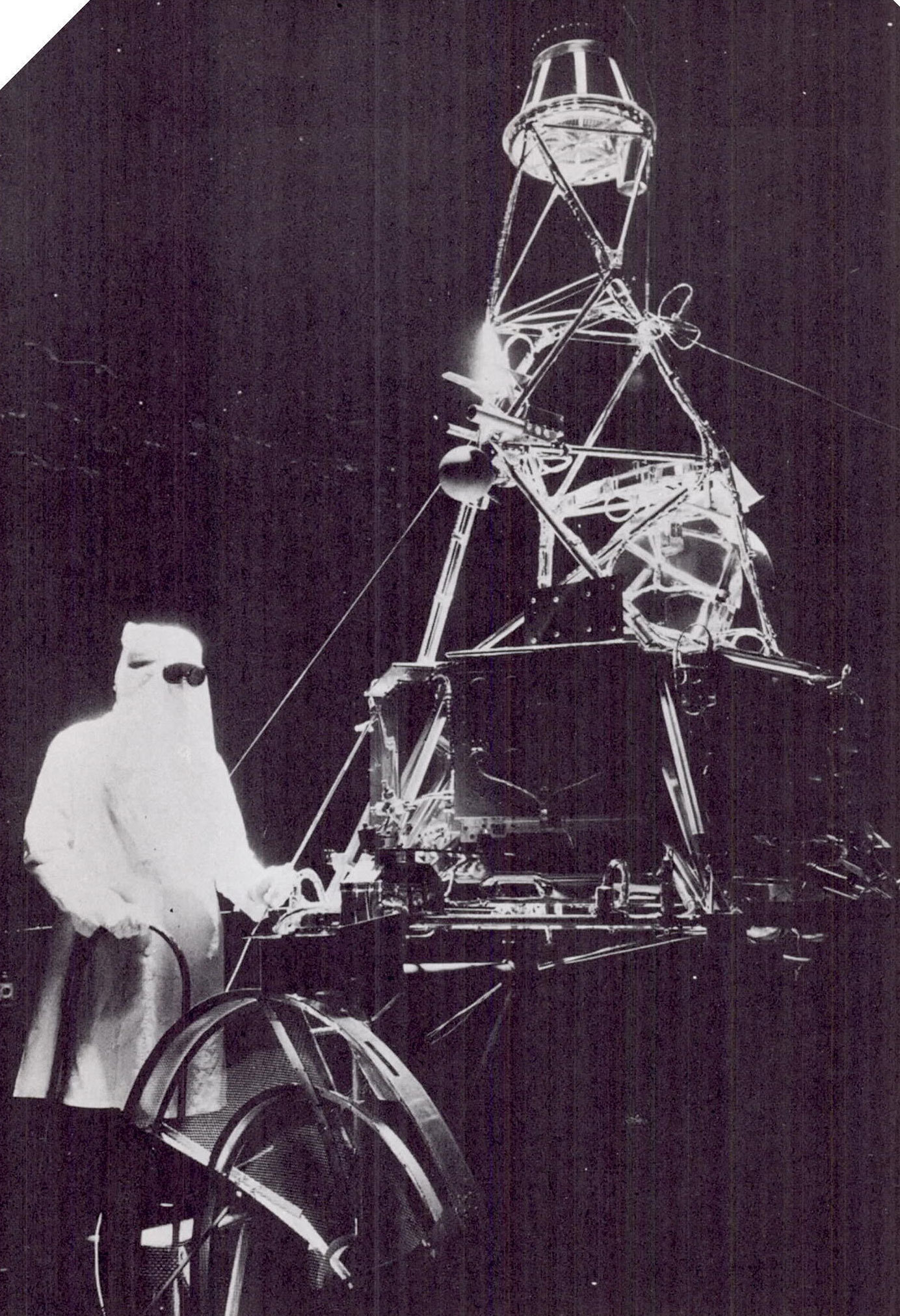 A technician wears a hood and protective goggles while working with a full-scale model of the Mariner spacecraft in a space simulator chamber at the Jet Propulsion Laboratory in Pasadena, Calif., in 1962.

This was just the first of a number of miraculous saves. The trip to Venus was hardly smooth. The spacecraft had all kinds of nerve-wracking troubles — things like a solar panel that stopped working and a temperamental Earth-locating sensor. Plus, as the spacecraft moved closer to Venus, temperatures shot up, and engineers worried that the heat would fry it.

"I was continually being called and given a report on things. My nerves had become so taut by this time that I instructed everyone that would call me to start out with one of two sentences: 'There is no problem,' or, 'There is a problem.' I mean, just get it over with," recalled Mariner project manager Jack James in an oral history videotaped by the Smithsonian in 1987. "Quite often, I got calls, 'There is a serious problem.' "

"Indelibly imprinted in my memory is the beautiful sound of the data stream returning from the encounter science experiments during flyby," NASA manager Oran Nicks later wrote in a memoir entitled Far Travelers: The Exploring Machines. "Words could not describe my feelings as the successful return of data from Venus at last provided evidence of a successful mission."

William Pickering, who served as the director of the Jet Propulsion Laboratory during the mission, later said that even he had been struck by the seemingly casual way that they'd communicated back and forth with something so many millions of miles out in space.

"And I must admit that at the time we were passing by the planet Venus, to sit outside and look at the star Venus in the sky and realize that a piece of our equipment was just then going past the planet was really a very surprising thing to do. And one had to, as it were, pull oneself together now and again and realize that this was indeed real, and this was happening," Pickering recalled.

The public loved it. This was the first time that NASA had beat the Soviets in space, after five years of Soviet milestones that included putting the first man in orbit around the Earth. Pickering was invited to be the grand marshal of the 1963 Rose Bowl parade, which featured a float of the Mariner 2 probe. 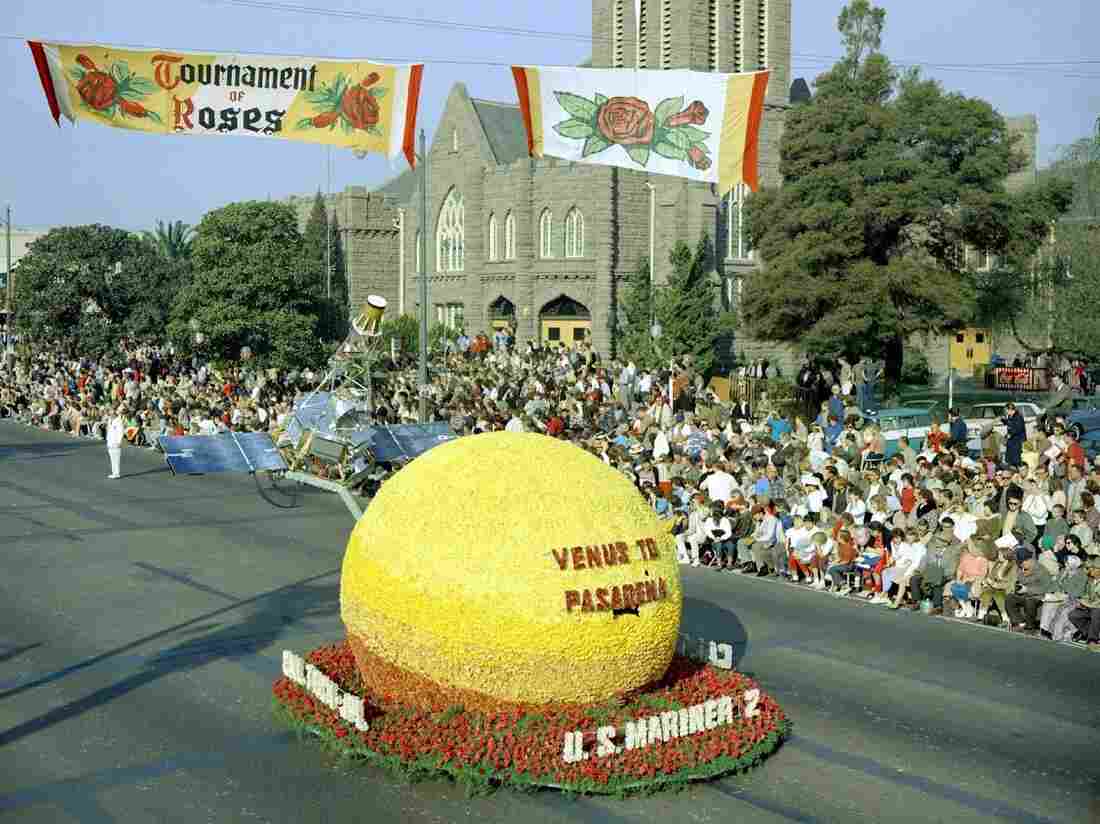 A model of JPL's Mariner 2 spacecraft above a floral "Venus" moved down Colorado Boulevard in Pasadena, Calif., in the 1963 Tournament of Roses Parade on Jan. 1. NASA/JPL/Caltech hide caption

Mariner 2 showed that the surface of Venus was way too hot for life: more than 700 degrees Fahrenheit. And it set the stage for all the exploration of our solar system that was to come.

By now, every planet in our solar system has been visited in some way, except for the dwarf planet Pluto; NASA's New Horizons probe is headed there and is expected to fly by in 2015.

"We have really quite a wonderful armada of missions that are currently exploring," says James Green, head of planetary science at NASA headquarters.

Looking forward another 50 years, Green says NASA could conceivably be doing all kinds of new missions, not just flying by or landing. He predicts that samples will be returned from Europa, an ice-covered moon of Jupiter that may have a subsurface liquid ocean, and robotic probes will explore the lakes of Titan, a moon of Saturn that has bodies of liquid ethane and methane on its surface. 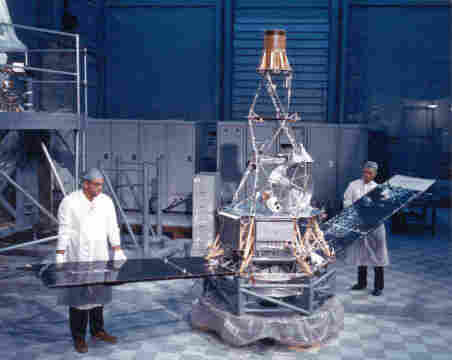 The Mariner 2 probe at an assembly facility in Cape Canaveral, Fla., on Aug. 29, 1962. NASA/JPL/Caltech hide caption 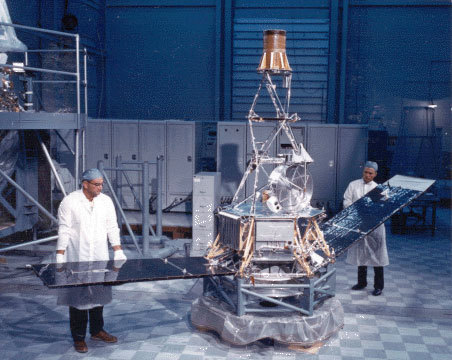 "So 50 years, you know, is an enormous leap. All you have to do is sort of look back at the last 50 years, where we've come, and you'll recognize that even what I've just said is probably going to be eclipsed by what we'll really end up doing in that 50-year time frame," says Green.

And we'll keep learning more about the recently discovered planets beyond our solar system, the ones circling other stars.

But some proponents of planetary exploration worry that without adequate funding, NASA won't be able to do big, ambitious missions to other worlds in the future. Planetary science isn't that large a fraction of NASA's budget, and gets only around $1.2 billion out of the space agency's annual total of around $17 billion.

"People are supporting space more than ever, yet the funding, especially for planetary science, is in jeopardy," says Bill Nye, aka "The Science Guy." He's CEO of The Planetary Society, which promotes more space exploration.

The group is worried about proposed cuts of around $300 million to NASA's planetary sciences division. Nye says that money could be used to fund development of another strategic-class mission, meaning a large, capable spacecraft. "And these are the kind of spacecraft that change the world," says Nye.

Meanwhile, good old Mariner 2 is still out there, though it's now a silent piece of space junk. Conway says it is orbiting the sun somewhere between Venus and Mercury. A model of it is hanging in a place of honor at the Smithsonian's National Air and Space Museum.

How Mariner 2 Communicated With Earth

To communicate with space probes and receive data, NASA built a system of three primary receivers that would allow for the collection of continuous, 24-hour coverage. Data from this Deep Space Instrumentation Facility, in addition to data collected from mobile tracking stations, was routed to the Jet Propulsion Laboratory headquarters in California.