Accessibility links
Mormon Women Dare To Wear Pants To Church Sunday morning could see a pants revolution at church, at least if you're Mormon. A group of women in The Church of Jesus Christ of Latter-day Saints is inviting all sisters to shed their skirts and dresses, and wear slacks or pantsuits in an attempt to change the conservative dress code. 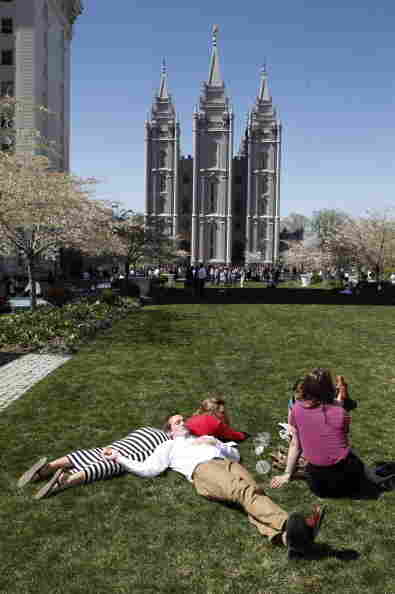 There may be fewer skirts sighted outside Mormon churches in Salt Lake City this Sunday. George Frey/Getty Images hide caption

Sunday morning could see a pants revolution at church, at least if you're Mormon. A group of women in The Church of Jesus Christ of Latter-day Saints is inviting all sisters to shed their skirts and dresses, and wear slacks or pantsuits in an attempt to change the conservative dress code.

Worship services in the LDS church aren't formal; "Sunday Best" hasn't meant gloves, hats and tights for decades. These days in most American congregations, the women wear skirts and the men wear ties. Stephanie Lauritzen discovered that pants on women can still raise eyebrows at her congregation in Utah.

A little fed up with the ossified gender roles this represented, Lauritzen created an event on Facebook, called it "Wear Pants to Church Day," and started inviting her friends. Thousands of people all over the country have signed up. Others commented that it was a bad idea. Lauritzen points out that Mormon church leaders haven't actually taken a position on pants.

It's a cultural norm that has gotten harder to pin down as American attire gets more and more casual. A few people in the pews on any given Sunday look like they're stopping in for a prayer on the way to a football game. Mormon women — and women in general — see few modest style icons.

"I think people like, say, Kate Middleton, who maintain a conservative nature while wearing fashionable clothes that look good on them," says Michaela Carey, an economics researcher in Chicago. She's not wearing pants to church this Sunday. Not because the duchess of Cambridge isn't often seen in pants, but because she feels like this movement won't do much to advance the conversation about gender equality.

Mercedes White, Carey's sister-in-law in Salt Lake City, feels differently. "It's not official. It is happening informally, that women are being told what to wear," she says. "And I think that needs to be pushed back against."

White says she wears pants to church with some frequency. She thinks they're more stylish, comfortable and practical than skirts, especially in the Salt Lake winter.

Rebecca Van Uitert, a lawyer in Chicago and a leader in her congregation, will wear slacks Sunday, to help other women feel welcome however they dress. "I'm kind of neutral about what people wear to church. I'm just happy when people are there," Van Uitert says.

Her sentiment is familiar to clergy across many other faiths: Whatever you decide to put on, for heaven's sake, just come to church.