Accessibility links
'We Have To Act' On Gun Violence. But How? The mass shooting at a Connecticut elementary school has revived calls for stricter gun laws. The debate is not unfamiliar, but the nature of the event may provide new impetus for action. Exactly what kind of action might make a difference is another story. 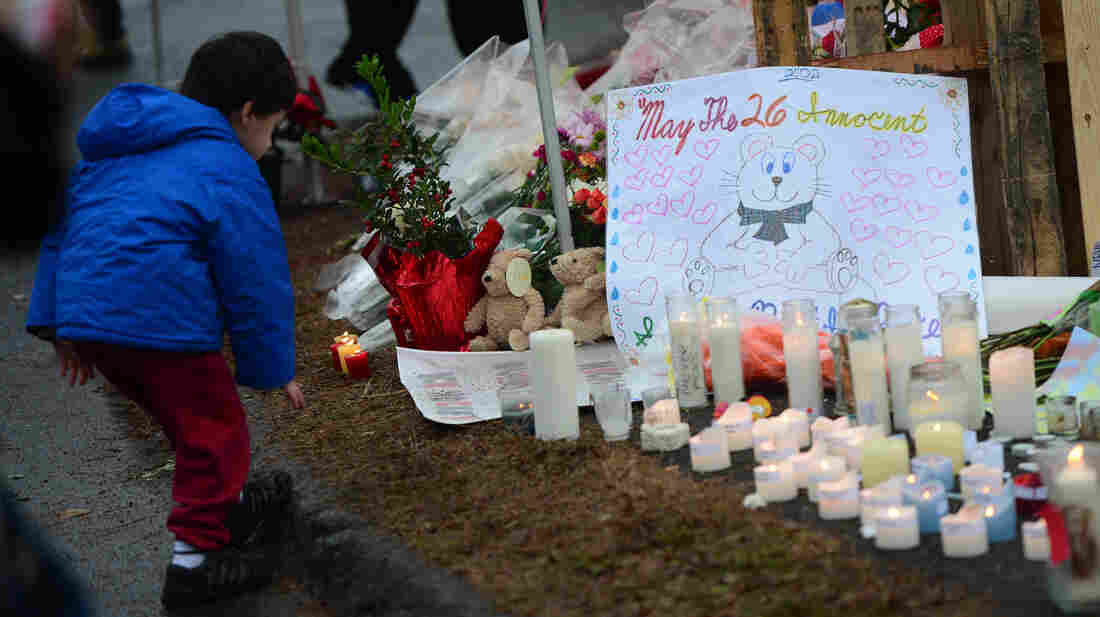 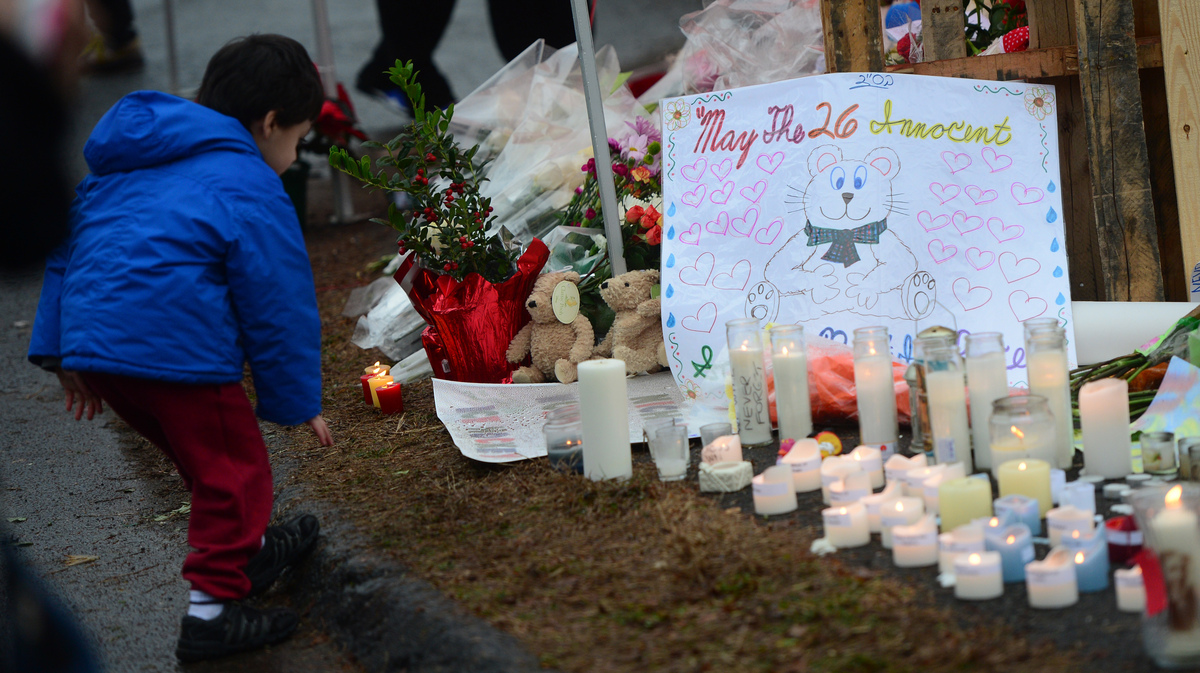 A makeshift shrine honors the victims of a elementary school shooting that happened Friday in Newtown, Conn.

Editor's Note: In separate interviews for weekends on All Things Considered Sunday, host Guy Raz spoke with Rep. John Larson and journalist Paul Barrett. You can hear the discussions as they aired at the audio link above.

In a sermon Sunday morning on gun violence, the dean of the Washington National Cathedral said "enough is enough."

"We have tolerated mall shootings, theater shootings, sniper shootings, workplace shootings, temple and church shootings, urban neighborhood shootings for far too long," said The Very Rev. Gary Hall. "The massacre of these 28 people in Connecticut is, for me, the last straw."

Details are trickling through about Friday's mass shooting in which 26 children and adults were murdered at an elementary school in the town of Newtown. The gunman also killed his mother before committing suicide.

The tragedy has caused a resurgence of calls for new gun control laws. It's a familiar trend — but people such as Hall believe this time will be different. Even as a religious official, Hall feels he has an obligation to make an appeal that could be called political.

"In response to a national tragedy, it seems to me the truthful response needs to be a public response," he tells Guy Raz, host of weekends on All Things Considered. "And the way our society has decided that it engages in its public business is through its political structures."

But exactly what kind of political action would make a difference isn't clear. 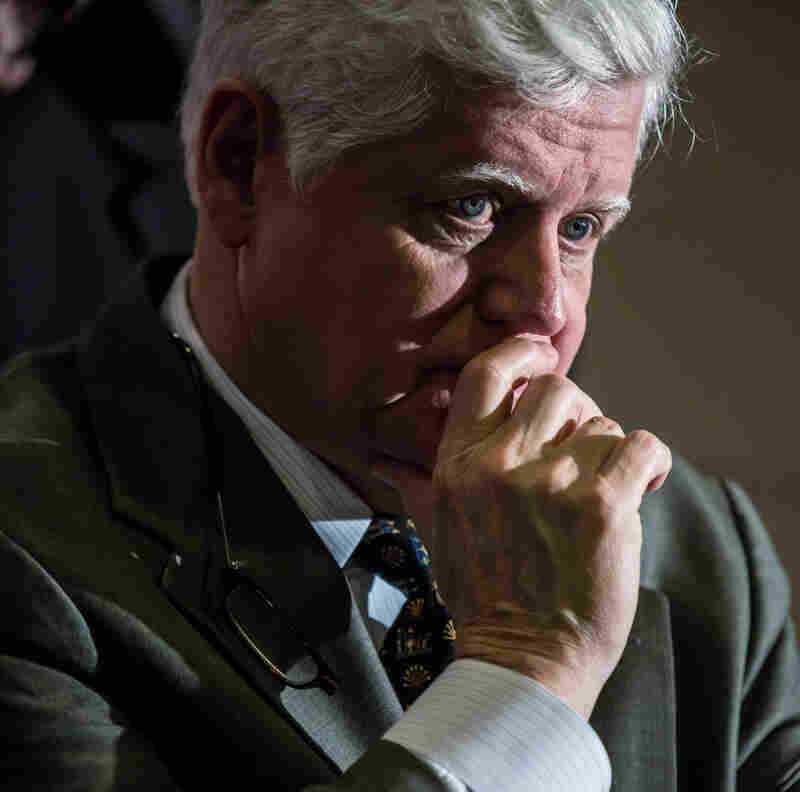 Half of the 12 deadliest shootings in American history have happened in the past five years, according to a statement released Saturday by Rep. John Larson. The Connecticut Democrat called for immediate measures to curb access to certain types of weapons and ammunition.

"We have to act. We can't just stand and lower the flags and ache along with everybody in Newtown, Conn. Especially for these parents, we have a responsibility to act," Larson said in an interview with NPR.

The state already has some of the strictest gun laws in the country, but the congressman is advocating for a ban on assault weapons and high-capacity clips, and for background checks for gun sales — something that Raz notes doesn't happen at unlicensed gun shows.

"I don't know that any specific action, as it relates to providing common sense regulations, will stop somebody who has the mind to do something," Larson says. "However, that doesn't mean that common sense, practical matters, shouldn't be taken as a matter of prevention."

Paul Barrett, author of Glock: The Rise of America's Gun, says stricter gun laws might not make a difference. In an article Friday for Bloomberg Businessweek, he wrote that things like assault weapons bans are "utterly pointless."

He cites a ban on assault weapons in the 1990s. There hasn't been hard evidence showing how specific legislation made a significant impact on crime rates, Barrett says. He also notes that the gun industry found ways to change their designs to get around the ban, and that a type of gun which had not previously been popular actually became more appealing.

Paul Barrett is an editor and senior feature writer at Bloomberg Businessweek and an adjunct professor at New York University Law School.

"As happens pretty consistently with our strange — you could even say perverse — firearm market place in this country, when you try to restrict something, you try to ban it, it makes it more popular among people who like guns," he says.

Barrett says he understands the human need for action, and banning a weapon can feel like substantive progress. "But it's also important to distinguish between symbolic gestures and the particular goal you're trying to accomplish," he says.

Although he wishes it weren't necessary, Barrett says his first recommendation is increasing security in certain public places, including movie theaters and schools. The second thing he says he would do involves finding a better way of dealing with mental illness: getting people help early on and separating them from weapons.

Neither increased security nor a new approach toward mental illness demands a debate over the Second Amendment, he says. Those debates can happen alongside other changes.

"By the way, there are certain gun control changes that I support, too," Barrett says, "but I don't have the illusion that they would prevent mass killings like the one we've just witnessed."

Will It Be Different?

Larson, the congressman, says he doesn't think any single measure will be a panacea. But he says finding a "comprehensive approach" — something both gun-control and gun rights advocates could agree on — makes common sense.

"I would rather be erring on the side of common-sense pragmatism and doing everything possible so that I felt that no stone was left unturned in terms of trying to protect school children," he says.

Larson hopes that this event will be a tipping point for political action.

"I believe that the horrific nature of this ... and the innocence of these kids [is] just so shocking and horrific that I believe — and it's my hope — that Congress will respond," he says.