Accessibility links
Japanese Voters Return Conservatives To Power The Liberal Democratic Party won resoundingly Sunday in parliamentary elections that both Washington and Beijing were watching carefully. The conservative LDP's hawkish leader, Shinzo Abe, will become Japan's prime minister for the second time and has pledged to take a harder line on China. 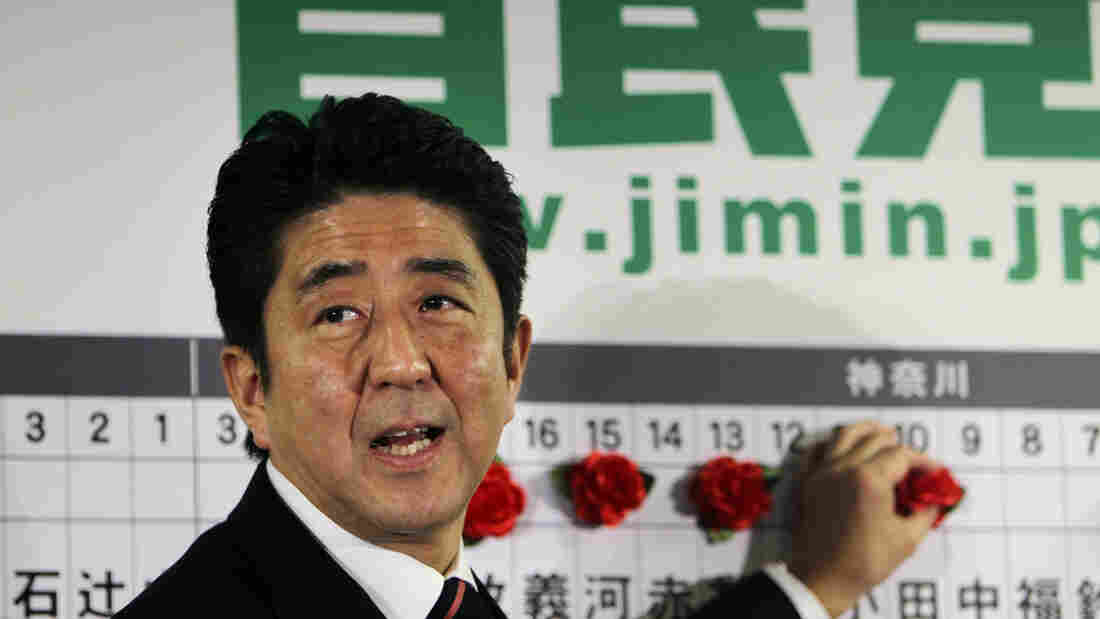 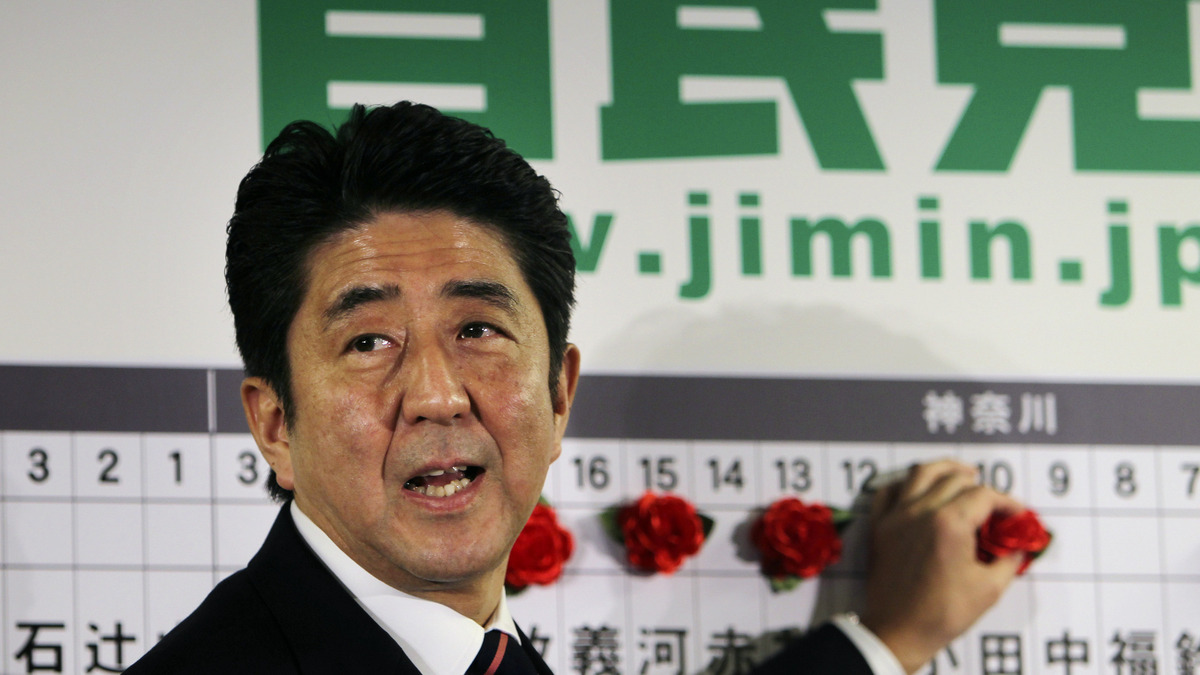 Shinzo Abe of Japan's Liberal Democratic Party marks the name of a parliamentary election winner at party headquarters in Tokyo on Sunday. Japan's conservative LDP stormed back to power Sunday after three years in opposition.

Japan's Liberal Democratic Party won resoundingly in parliamentary elections Sunday that both Washington and Beijing were watching carefully. The conservative LDP's hawkish leader, Shinzo Abe, will become Japan's prime minister for the second time and has pledged to take a harder line on China.

Speaking on Japanese TV, Abe had a message for Japan's most important ally, America, and another for Japan's biggest rival — China.

"First, we should restore the Japan-United States alliance, a trusting alliance — that's the first step. Based on that, we'd like to improve our relationship with China," he said.

Then, Abe reiterated his unwavering line on the Senkaku Islands. A bitter dispute over the island chain in the East China Sea led to massive protests in China this fall and has plunged relations between the two countries to its worst level in years.

"We'd like to show our strong intention that we will never change this current situation that Senkaku is Japanese territory," Abe said.

The United States, which has a treaty to defend Japan, welcomed the victory by Abe's party but encouraged both countries to keep talking.

"We would like to see in-depth dialogue, close cooperation between these two most important economies, and a concerted effort to build a region together which works to the benefit of all concerned," said Kurt Tong, deputy chief of mission at the U.S. Embassy in Tokyo.

Frustration With The DPJ

The campaign was marked by nationalistic rhetoric, and some analysts worry that Japan could be heading to the right.

But Koji Murata, who teaches political science at Doshisha University in Kyoto, says the LDP's win said less about its policy toward China and more about the failings of the ruling Democratic Party of Japan, or DPJ. "The LDP did not win — the DPJ lost," he said.

"I don't think this is a shift of Japanese politics to a more nationalistic direction. This is a reflection of Japanese frustration with the DPJ government," Murata said.

Naomi Mabashi felt that frustration. She's a mother of three who works for a jewelry manufacturer north of Tokyo. Mabashi supported the DPJ in the last election in hopes it would turn around Japan, after two decades largely marked by political and economic malaise.

But the DPJ failed to fix the country's fiscal problems, and the economy appears to have slipped back into recession.

"They were just no good. They said they would get rid of the bureaucrat's control, but eventually they just couldn't do it," she said.

Little Islands Are Big Trouble In The South China Sea

Mabashi's vote was not entirely in protest. She says she supports Abe because she thinks he will stand up to China and better manage Japan's crucial security relationship with the U.S.

"For years, more and more Chinese military aircraft have come very close to Japanese territory," she said. "China's power is growing, and I want Japan and the U.S. to have a good relationship."

U.S.-Japanese relations suffered after the DPJ tried to move an American Marine base off the island of Okinawa because of residents' constant complaints.

One issue that did not get as much attention in the campaign is the future of nuclear energy and the fate of those who lost their homes to last year's earthquake, tsunami and meltdown.

"It's a very lonely life," says the 68-year-old Watanabe. "The hardest thing is we have nothing to do."

Watanabe is still waiting for a settlement from Tokyo Electric Power Co., which owns the reactor. She didn't vote for a major party Sunday — she backed the Japanese Communist Party because, she says, it seems more concerned with helping disaster refugees.

Watanabe says she wonders if politicians have forgotten about folks like her.