Accessibility links
Newtown Tragedy: Would A Good God Allow Such Evil? In the aftermath of tragic events like the school shooting in Newtown, Conn., people often question why an all-powerful God would allow such evil to happen. Throughout human history, different faiths have attempted to reconcile belief in a benevolent God with the inevitability of human suffering. 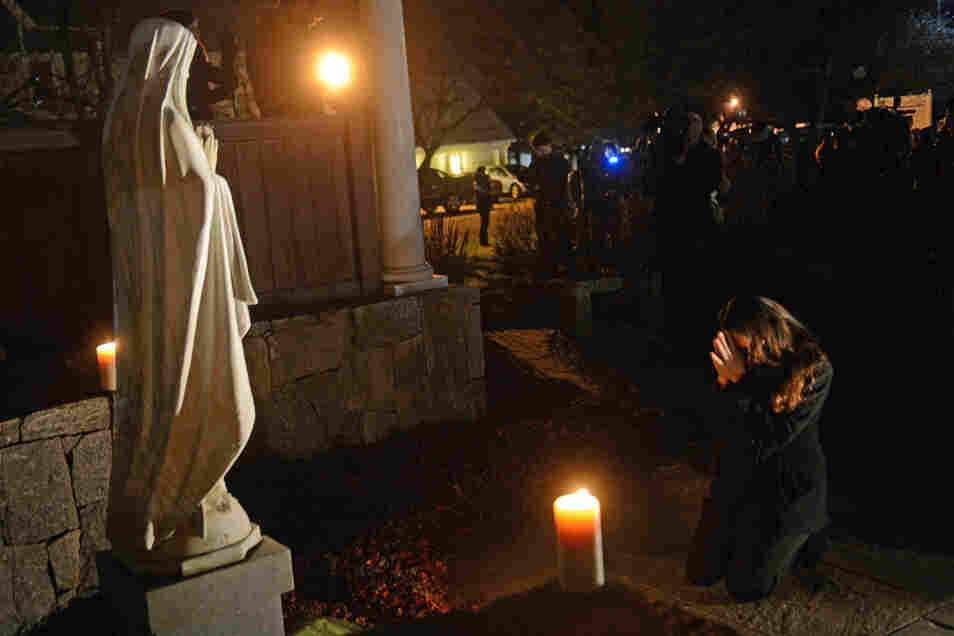 People gather for a prayer vigil at St. Rose Church in Newtown, Conn., on Dec. 14. In the aftermath of such tragedies, many people ask how a benevolent God and suffering can coexist. Emmanuel Dunand/Getty Images hide caption 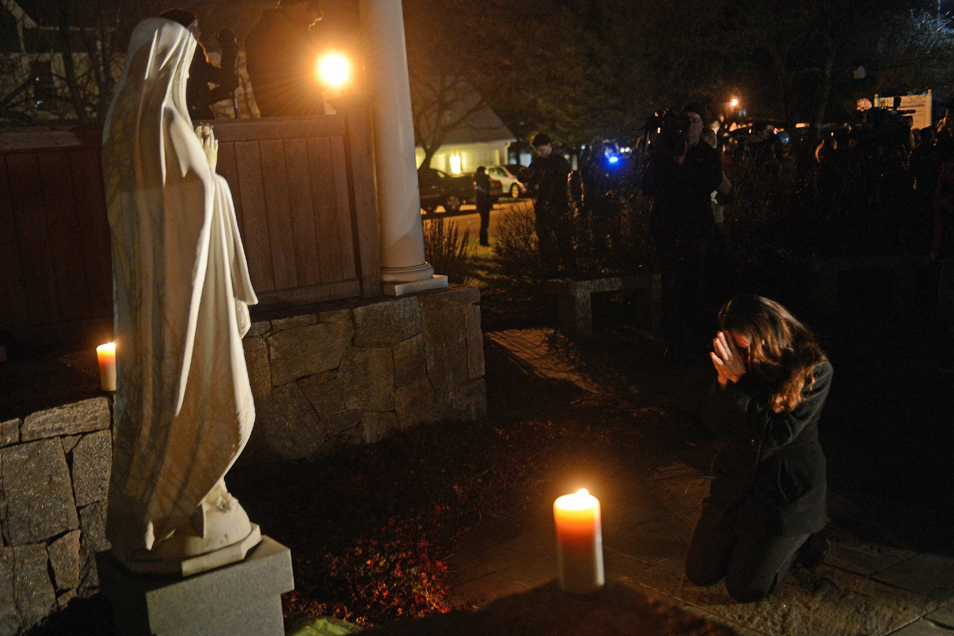 People gather for a prayer vigil at St. Rose Church in Newtown, Conn., on Dec. 14. In the aftermath of such tragedies, many people ask how a benevolent God and suffering can coexist.

When a human tragedy occurs on the scale of the Newtown shootings, clergy are invariably asked an ancient question: If God is all-knowing, all-powerful and benevolent, why does he allow such misfortunes?

There's even a word for reconciling this paradox: theodicy, or attempting to justify God's goodness despite the existence of evil and suffering.

A World Both Beautiful And Shattered

Steven Folberg, senior rabbi at Congregation Beth Israel in Austin, Texas, has been asked this question before. On his front porch on a balmy December day, a reporter asks him again: Please explain the nature of God, in light of the slaughter of innocents in Connecticut.

"I saw a bumper sticker once that said, 'God is good. Evil is real. And God is all powerful. Pick two,' " Folberg says.

"The idea was to say, if one accepts those three propositions as true, then they're logically inconsistent. And how do you wiggle your way out of that issue?"

You cannot wiggle your way out, the rabbi continues. You have to admit that we live in a world that is, by turns, beautiful and shattered.

Folberg says he draws instruction from his own faith, which says, "I have a responsibility as a human being — and in my case, as a Jew — to look at what's broken in the world, to mend it and then, using old Jewish language, to be a partner with God in completing the work of creation which is incomplete."

In Connecticut: Prayers, Grief, Questions And Stories Of Heroism

The Rev. James Martin, a Jesuit priest and contributing editor at the Jesuit magazine America, says that for Christians, suffering, violence and death are never the last word.

When Someone You Know Loses A Child

"We believe in eternal life," Martin says. "It does give people hope for those who are killed, for those who die, that they will be in God's eternal rest.

"And it also gives us the hope that we will meet them again," Martin adds. "So suffering and death are not the only part of the story — and the resurrection shows us this."

Moreover, Martin says, God is not a theological abstraction; he is present in our suffering. He understands pain.

"Remember that God's own son died a violent death," Martin says. Jesus died horribly ... but there is no easy answer — there is no adequate answer — to this question which theologians call the Mystery of Evil."

Part of the paradox of theodicy is rooted in our very nature, says Imam Jihad Turk, religious adviser at the Islamic Center of Southern California and president of Bayan Claremont Islamic graduate school. Islam shares this belief with the other Abrahamic faiths, Turk says.

"Theologically, we would look at it from the point of view that part of what makes us unique as a creation of God is that we have free will," Turk says. "And for free will to be meaningful, we have the choice between good and evil. And if we only had the choice to do good then it wouldn't be a meaningful free will."

In August, an alleged white supremacist walked into a Sikh temple in Oak Creek, Wis., and randomly murdered six people. It's believed the assailant mistook Sikhs for Muslims.

The wife of Balhair Dulai, director of the board of trustees at the temple, was one of three people wounded in the attack. Dulai believes the killers who did mayhem in his temple and in Sandy Hook school had something in common: They dwelled in darkness.

"Evil comes when there is no God," Dulai says. "And when there is not God's love, the conscience allows evil to creep in. When evil creeps in, then these things tend to happen."

So why does a good God allow evil? These four faith leaders agree on this: Beware of anyone who says he or she has the answer.