Accessibility links
For Sandy Hook's First Responders, Trauma Lingers With Painful Reminders First responders are trained to rescue, help and save. In Newtown, Conn., many of the police officers, firefighters and EMTs who rushed to Sandy Hook Elementary School last week are struggling to cope with the fact that there was little they could do to help. 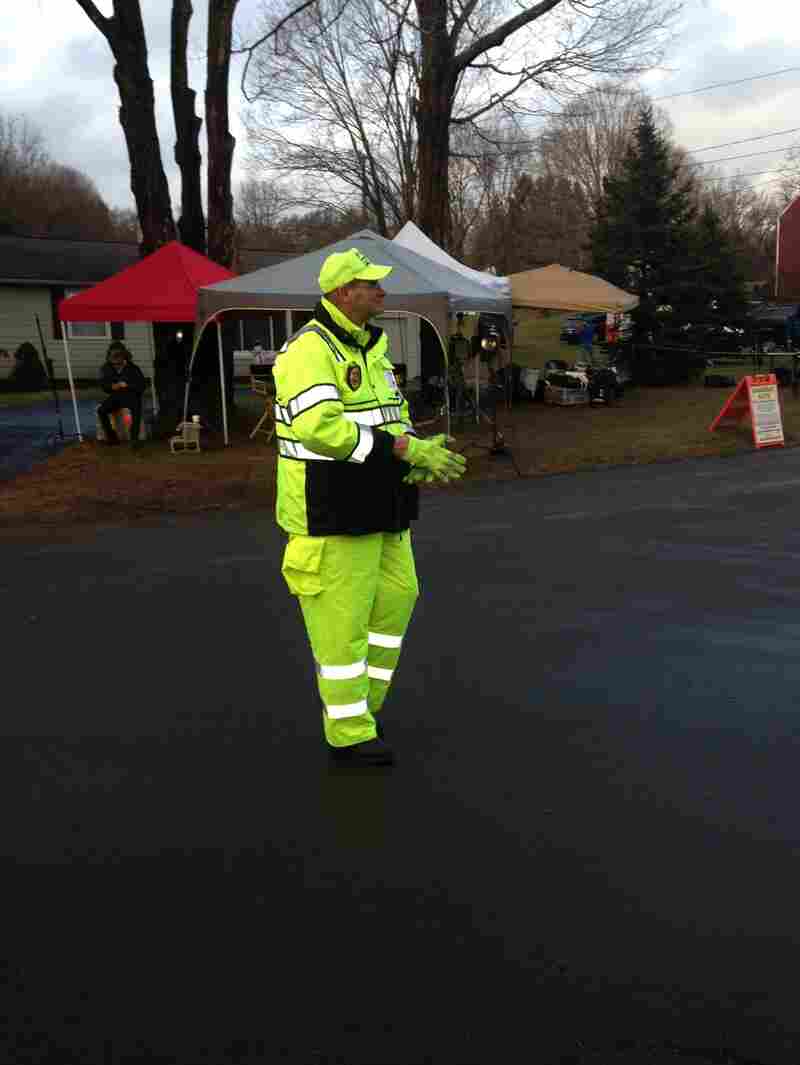 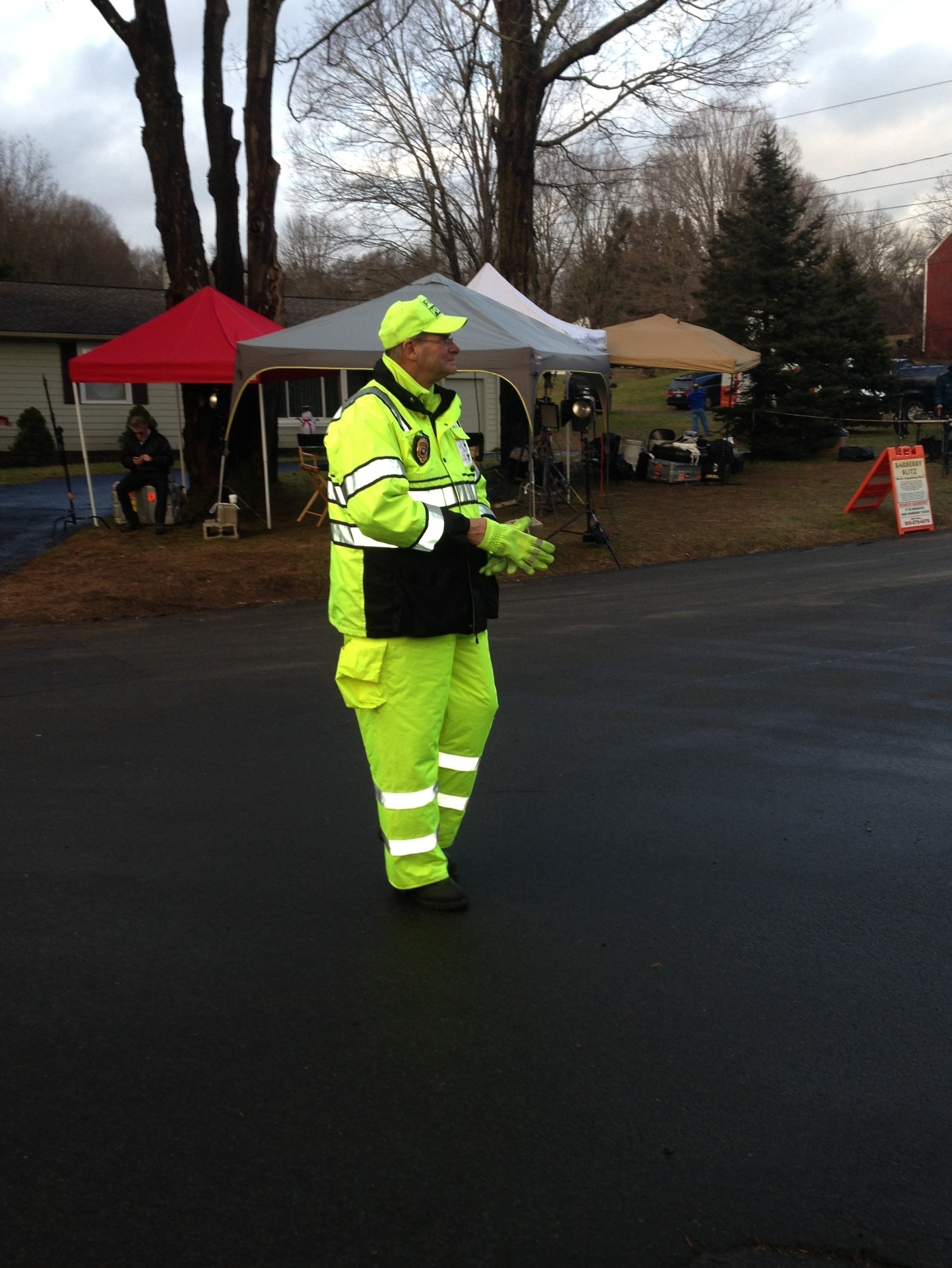 "We're holding up the best that we can" after Friday's shootings, says Sandy Hook volunteer firefighter Anthony "Chip" Carpenter.

The police officers, firefighters and emergency medical teams who rushed to Sandy Hook Elementary School Friday are trying to cope with what they saw there, even as they work to investigate the awful crime that transpired and help their community cope with its aftermath.

The first responders are also struggling with the fact that they weren't able to save anyone, as they had been trained to do.

Volunteer firefighter Chip Carpenter stands on the corner in front of the firehouse, as a huge 18-wheeler pulls out from the elementary school behind it. It's carrying desks, computers and books to another school in nearby Monroe, where Sandy Hook's students will go after the winter break.

For Carpenter, the mundane duty of directing traffic now feels a bit surreal.

Across the street, there's a huge roadside memorial.

Hundreds of people stream by here each day to pay their respects to the victims. And many also thank the officers and firefighters posted out front.

Carpenter says the tight-knit group of Sandy Hook first responders, many of them volunteers, is exhausted and working long hours.

"We're holding up the best that we can. I mean it's, it's going to be a very long process," he says. "We come, we do our job. We have our good moments ... as for myself, I have a lot of tough moments."

Among them was the passing of a funeral procession moments earlier, carrying one of the 6-year-old shooting victims. Carpenter teared up as the motorcade went by.

"That was probably one of the toughest moments I've had since the incident," he says. "That was, I just didn't expect it to be that way."

Carpenter arrived in the hectic aftermath of Friday's deadly shootings, ready to employ his years of training. But, he says, "It was all done. There was no injuries that we can take care of, there was nobody that we can transfer to the hospital. It's just the helplessness of [being] unable to do anything."

Standing with Carpenter when that funeral procession went by was Lee Shaw, a police and fire chaplain from Napa, Calif., who is counseling the Sandy Hook first responders.

As a result, Shaw says, some of the police officers, firefighters and EMTs are struggling with feelings of anger, guilt, grief and frustration.

"You can't fix them; you can't go in and get inside their heart and take care of things for them," he says. "But you can encourage them, you can by your presence ... chaplains, most of us, we call it a ministry of presence, that just by being there [we] can be of great assistance to them."

The Sandy Hook first responders are getting an outpouring of support from many in the community, from a standing ovation at Sunday night's memorial service to people giving hugs and plates of cookies at the firehouse.

They're also getting the support of their colleagues around the country. Bruno Castanheira is one of three EMTs who drove up from Newark, N.J.

"Just to pay our respects," he says.

Castenheira says in his profession, it's always difficult to respond to the shootings of children.

"It will hit you hard," he says. "And there's nothing, nothing out there from schooling, from practice that will prepare you for something like this."

Castanheira and his colleagues say they, too, know what it feels like to arrive on the scene of a tragedy too late.

"One word: helpless," he says. "You start second-guessing yourself sometimes, and think about, maybe if I would have taken this turn instead of that turn, or maybe if I was here 30 seconds earlier, maybe we could have saved one child. And it's ... you just feel helpless."

On their way up a hill in Newtown to visit the Sandy Hook Fire Station, these three Jersey EMTs said they still did not know exactly what they'd say to the Sandy Hook first responders, other than just try to let them know they're here for them, and that they're family.