Accessibility links
Movie Reviews - 'Jack Reacher' - 'Jack Reacher': A Film Grasping For Life Tom Cruise stars as the titular character in the action flick Jack Reacher, which was adapted from Lee Child's One Shot. Critic Stephanie Zacharek says the film takes itself and its star too seriously — meaning it feels joyless and perfunctory. 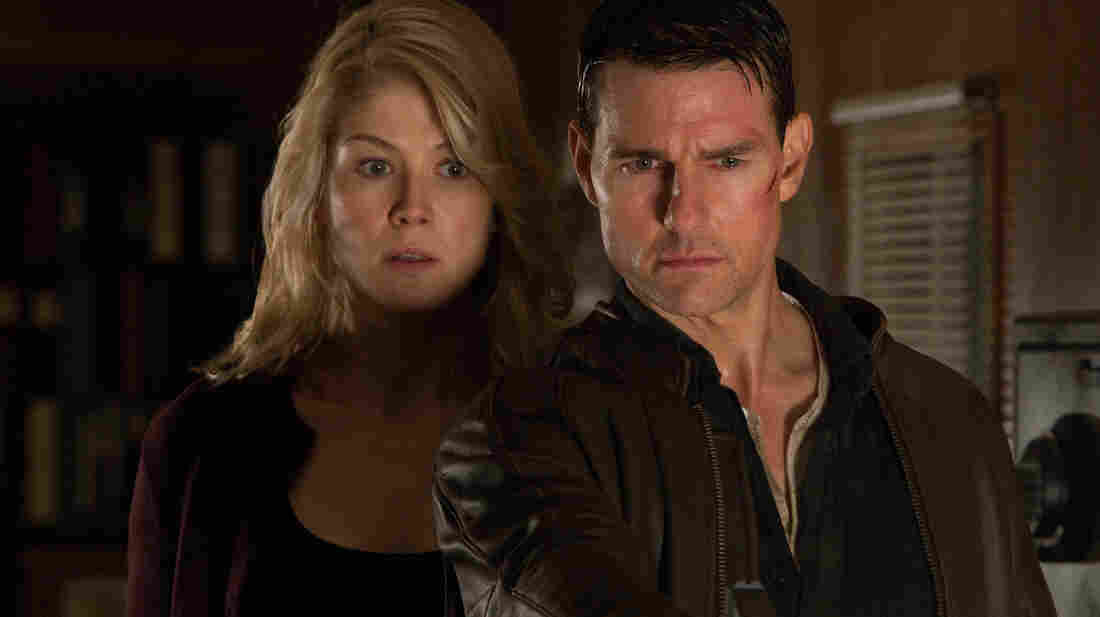 Rated PG-13 for violence, language and some drug material.

Among those who have read and loved Lee Child's enormously popular Jack Reacher novels, the big complaint about Cruise's having cast himself as Child's burly, laconic protagonist is that he's the wrong physical type. Cruise doesn't have the strapping stature of Child's Reacher, although he is extraordinarily fit — lest we fail to notice, he appears shirtless several times in the picture. He's also pretty good at pulling off the hand-to-hand combat at which Reacher excels.

The bigger problem is that Cruise, as Reacher, has no wit and no style, other than the studiously applied kind. He's so desperate to do everything right that nearly everything he does comes off all wrong. And though director Christopher McQuarrie — who also adapted the screenplay, from Child's novel One Shot — shows some visual intelligence, he doesn't do enough to goad Cruise into giving this performance some shape. Cruise's idea of characterization consists chiefly of glaring and tightening his jawline. How could readers who love Jack Reacher not expect more?

At least McQuarrie, a veteran screenwriter who made his big splash with The Usual Suspects and also did some reworking of last year's moderately enjoyable Mission: Impossible — Ghost Protocol, has good storytelling instincts. (This is the second film he's directed; the first was 2000's The Way of the Gun, with Ryan Phillippe and Benicio Del Toro.) The picture opens with an extended wordless sequence that sets up the plot in precise visual language: A man whom we later learn — or believe — is a trained Army sniper heads to a specific urban locale in Pittsburgh and coolly picks off five human beings in the span of a few minutes. The suspect, an anonymous-looking guy named Barr (Joseph Sikora), is immediately arrested and taken into custody, where he's quizzed by a detective (David Oyelowo) and the DA (Richard Jenkins). The two try to force a confession out of the suspect, but instead, he scrawls on a sheet of paper, "Get Jack Reacher."

Enter Reacher — eventually, at least. Reacher is a former Army investigator, now a drifter who moves hither and yon, taking action whenever justice needs to be served. (In one case, he does so by bashing the craniums of two meatheads together until the poor sods fall into a heap on the floor.) Reacher knows something about Barr's past, and he agrees — or at least doesn't refuse — to help the man's attorney (Rosamund Pike), who also happens to be the DA's daughter, keep the guy off death row. 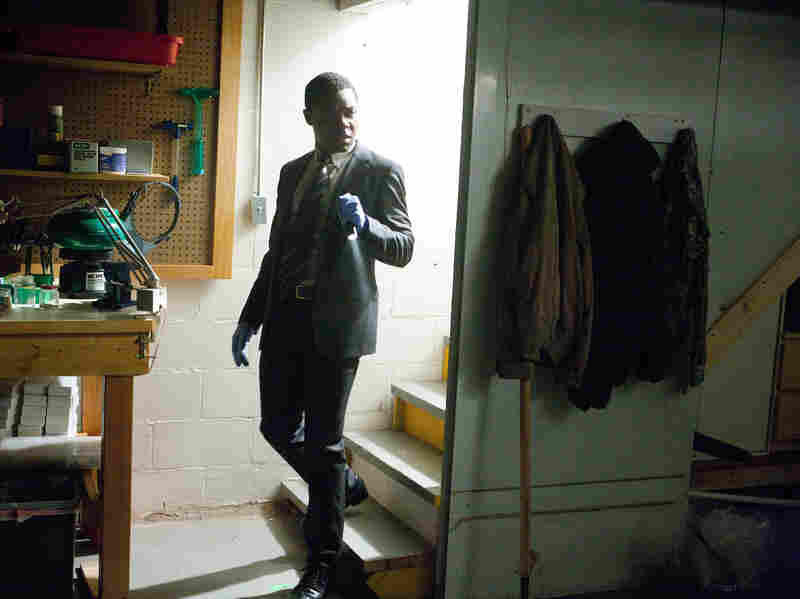 Emerson (David Oyelowo) helps investigate the case, which is much more complicated than it appears. Karen Ballard/Paramount Pictures hide caption 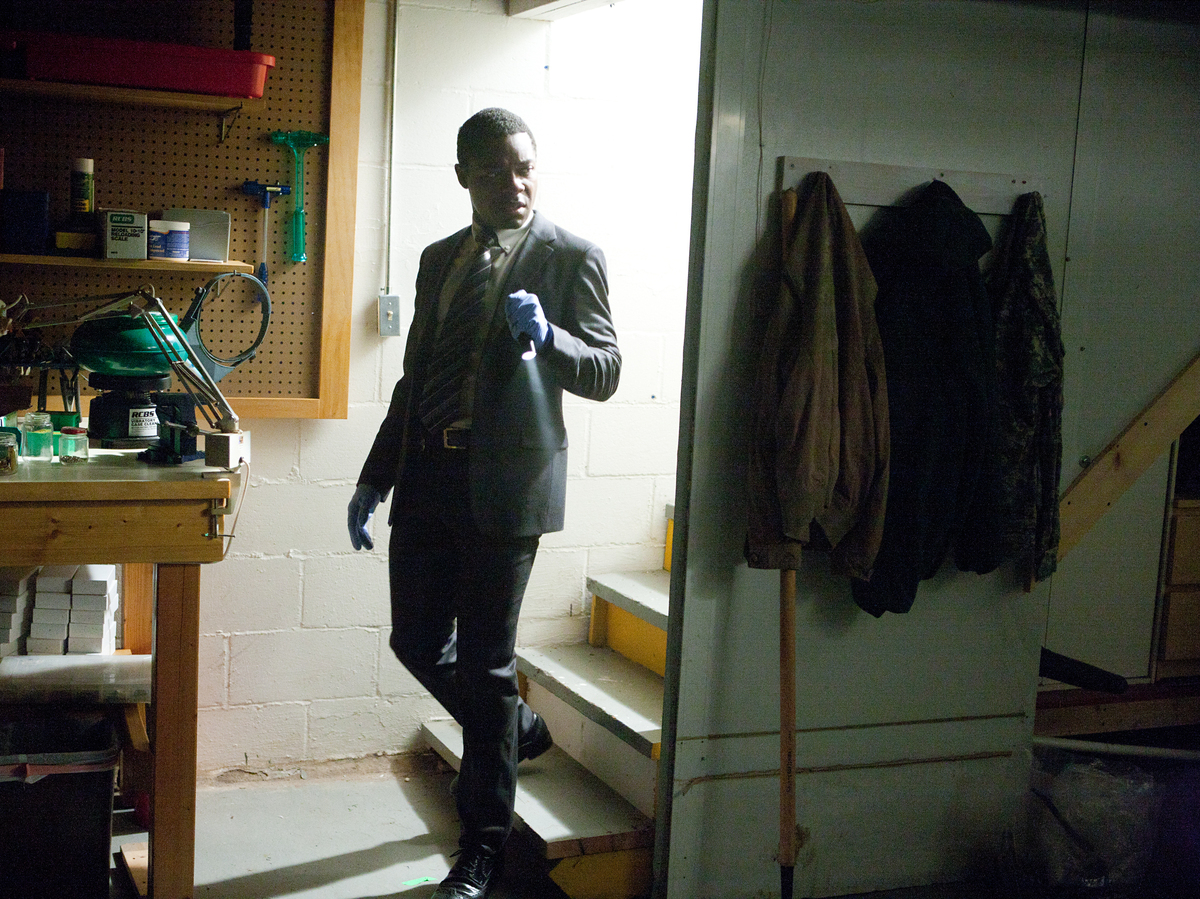 Emerson (David Oyelowo) helps investigate the case, which is much more complicated than it appears.

Through it all, Cruise's Reacher breaks the limbs of thugs as if they were twigs, makes wry remarks that don't quite qualify as jokes and drives fast cars, crazily, though the streets and the forlorn outskirts of Pittsburgh.

Watching Cruise wrestle the role of Reacher into submission isn't exactly painful, but it isn't particularly enjoyable, either. Even when Cruise allows himself to be the butt of a joke — when, for example, Reacher is being assaulted by guys with heavy-duty automatic weapons and looks down forlornly at the weapon in his hands, a knife — he's always in complete control; he can never relax and let go.

There's more than a whiff of desperation in the performance: When Reacher enters a bar, or any other place where womenfolk tend to congregate, the ladies in the room fix the female gaze upon him with a "What's that aftershave you're wearing?" intensity. Naturally, Reacher is hot, and obviously irresistible to women. But Cruise plays these moments with faux-cool cockiness that speaks more to his own middle-age insecurity than to anything inherent in Reacher's character.

And again, Cruise never passes up a chance to show what a great bod he's got. (Pike, an actress who's generally cool as a cuke, is called upon to act flustered when she's treated to an eyeful of Reacher's brawny bare pecs.) Luckily, there are other actors to look at here, and they manage to throw off some intelligent energy when they're around: Werner Herzog plays a mysterious baddie with a milky eye and a silky voice, and Robert Duvall, as an extremely helpful ex-Marine, steps in at the 11th hour to show Cruise a thing or two about how to sling a joke. (His buoyancy, even when he's playing your stock, squinty-eyed Marine type, is key.)

But none of it is enough to make Jack Reacher exciting or even just vaguely fun. The picture is joyless and perfunctory. Call it Mission: Possible.