Accessibility links
From Shoes To M&M's, Custom-Made Products Take Off Online The ability to customize products began with computers more than a decade ago. Now, you can create your own T-shirts, jeans, custom-blend cosmetics and candy. Even luxury brands like Burberry, Prada and Louis Vuitton now let customers design their own looks. 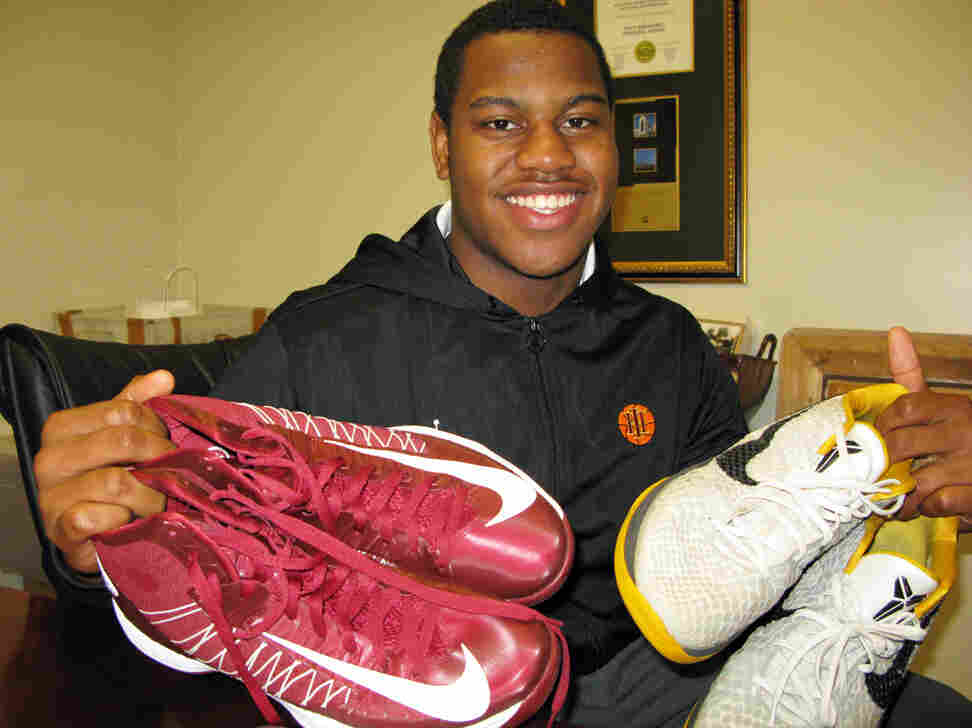 High school student Jon Ledbetter designs his own "NikeiD" sneakers. Ledbetter can post his designs on Nike's website, where other shoppers can also order them. Kathy Lohr/NPR hide caption 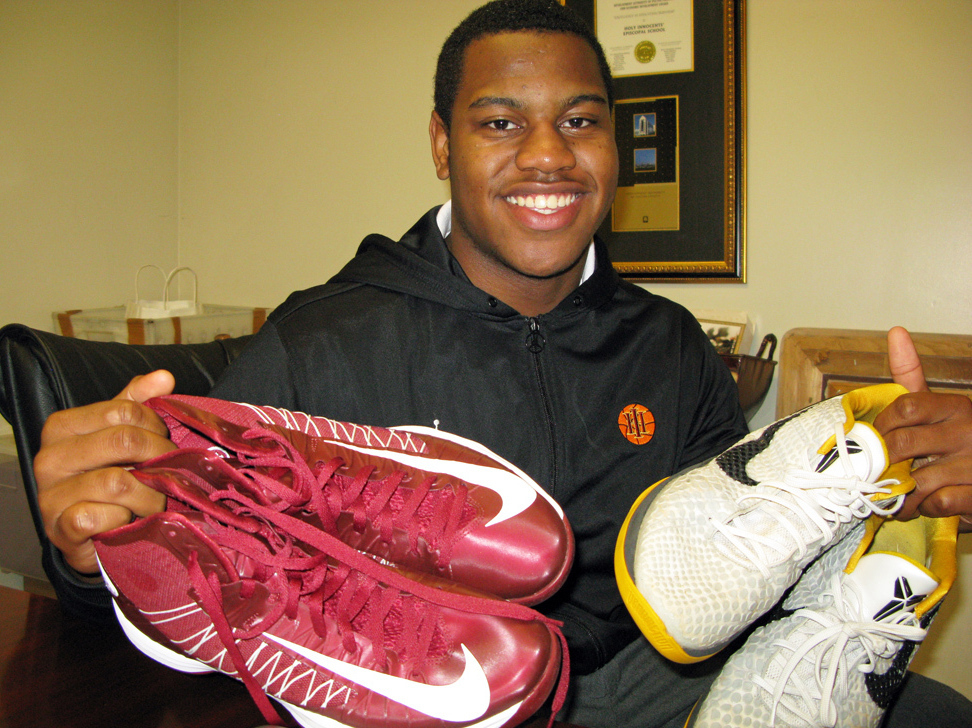 High school student Jon Ledbetter designs his own "NikeiD" sneakers. Ledbetter can post his designs on Nike's website, where other shoppers can also order them.

It wasn't long ago that all consumers went to retail stores to buy things. These days, of course, you can get just about anything online. Some companies are now taking that shopping experience to the next level, allowing customers to design almost anything individually — from a trench coat to a batch of M&M's.

Lindsay Stewart, a senior at Holy Innocents' Episcopal School in Atlanta, is a Converse fan — and an avid Converse custom designer. Converse, like Nike, offers sneakers that customers can customize, mixing colors and patterns to bring their ideas to life.

"You can do half of the shoe stars and [the] other half is still simply white," Stewart says, showing off her design. "You can incorporate the color you specifically want so it can easily match your outfits."

Stewart has designed three pairs this year: one with a star pattern, another for the Fourth of July and a neon mix she made for a party.

"Students really love showing off, and kids love showing off who they are," Stewart says. "And ... me spreading the word about how I designed these shoes led to all my friends wanting to design their own."

That's just what retailers are hoping for — getting customers involved and having them tell others about their experience.

The only drawback may be the cost. These custom-designed shoes are about 20 to 25 percent more expensive, depending on the design.

Customization started with computers more than a decade ago. Now, you can create your own T-shirts, jeans and custom-blend cosmetics.

Some luxury brands are getting involved, too. On the Burberry Bespoke website, it's hard not to be seduced by the elegant tune playing under close-ups of hand-sewn fabric and old-world charm. Burberry allows customers to create their own trench coats, but they start at more than $2,000 — and no returns are allowed.

And at Prada and Louis Vuitton, you can make your own handbags and shoes with limited options to preserve their high-end designer look. 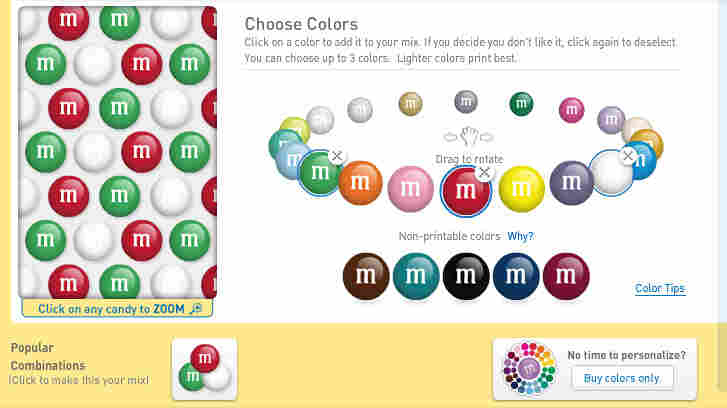 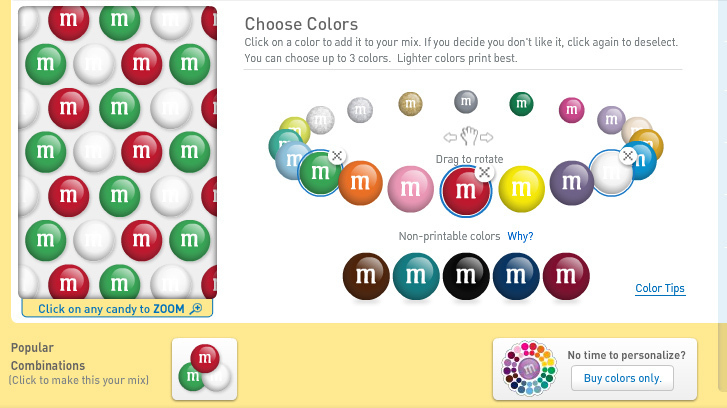 M&M's lets customers create their own mix by choosing colors and even adding personalized photos and messages.

"It really helps build a relationship with their customers," says Ann Marie Fiore, a professor of apparel at Iowa State University. "You're always looking at building that brand loyalty."

Fiore says companies face extra upfront costs in setting up the customization process. On the other hand, they save on product development costs because consumers are doing that for them and they don't have to store big inventories.

Fiore says one of the biggest growth areas is food. A site called Chocomize, for example, lets you create your own gourmet chocolate bars by adding fruits, nuts and even sugared rose petals.

"I can see this as being something that's really attractive, where people feel more confident about their choices," Fiore says. "And there's not so much risk. So you're not paying $425 for a pair of shoes, you're paying $8 for a candy bar."

Fiore predicts that all means customization will only continue to grow for a variety of products.

M&M's is already doing it. You can choose your own colors, add designs and even have your own photo printed on the tiny candies.

I ordered my own Christmas-colored mix with a snowman print, chose expedited shipping and had my package two days later. They're exactly what I ordered, but the cost is four times higher than if I'd bought traditional M&M's at a store. And shipping is extra, too.

Dan Michael, research and development director for Mars Retail Group, which makes M&M's, says it took the company about three years to develop its customization process. He says the company gets about half a million orders a year, with weddings and birthdays as the biggest draw.

"The candy certainly serves as ... a blank canvas for our customers to create their perfect expression," Michael says.

Back at Holy Innocents' High School, student Jon Ledbetter says personalizing clothes and shoes is fun for him and for lots of young people. He plays basketball and has designed about a dozen pairs of "NikeiD" sneakers, including one featuring the school's crimson and gold colors.

Two German professors have documented some 500 international mass-customization sites and the number is growing.