Accessibility links
HBO's 'Enlightened' Take On Modern Meditation Laura Dern is Amy Jellicoe, a health and beauty executive who returns from a post-meltdown retreat to pick up the pieces of her broken life in the HBO series Enlightened. Series creator Mike White talks about the tone of the show, and whether it's possible for people to really change. 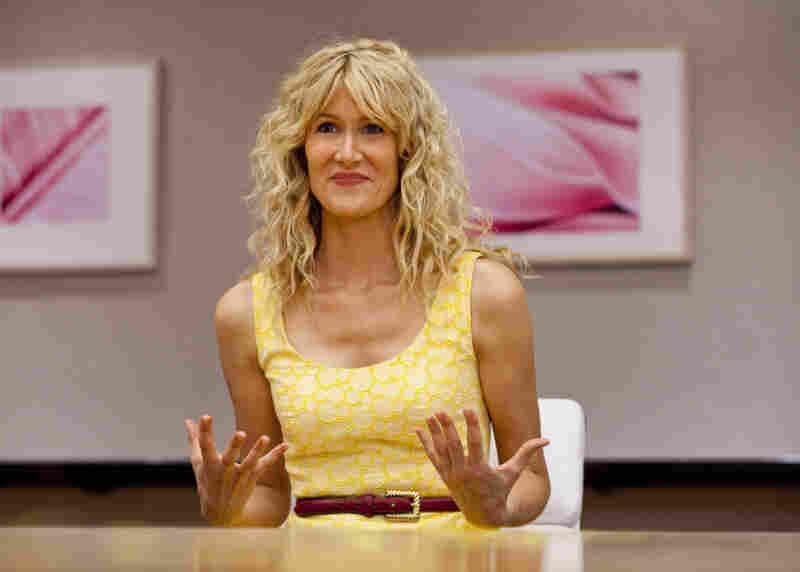 Laura Dern is Amy Jellicoe, a health and beauty executive who returns from a post-meltdown retreat to pick up the pieces of her broken life in the HBO series Enlightened. HBO hide caption 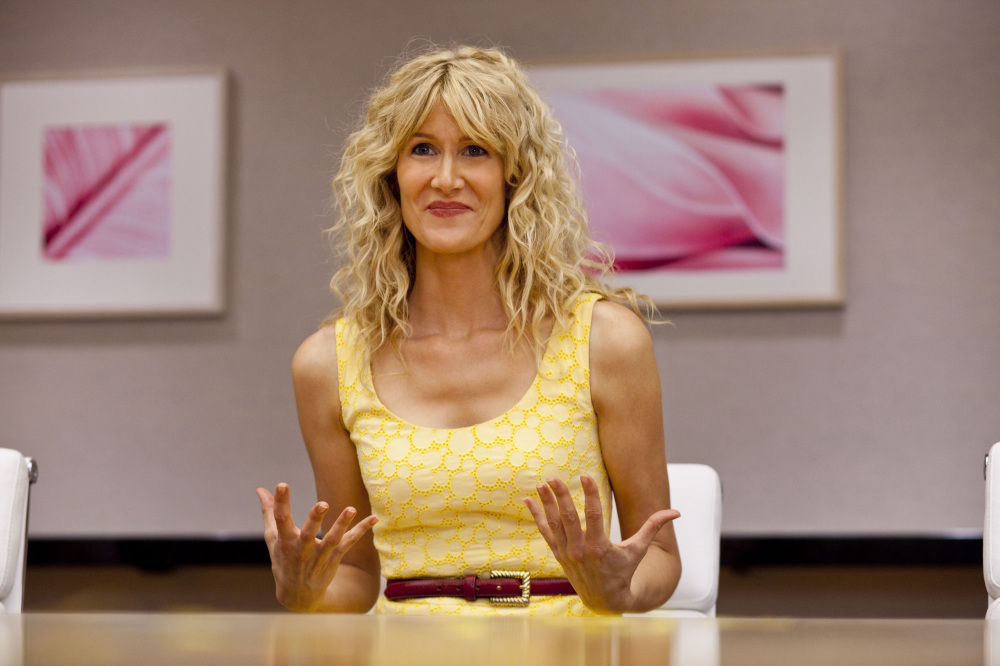 Laura Dern is Amy Jellicoe, a health and beauty executive who returns from a post-meltdown retreat to pick up the pieces of her broken life in the HBO series Enlightened. 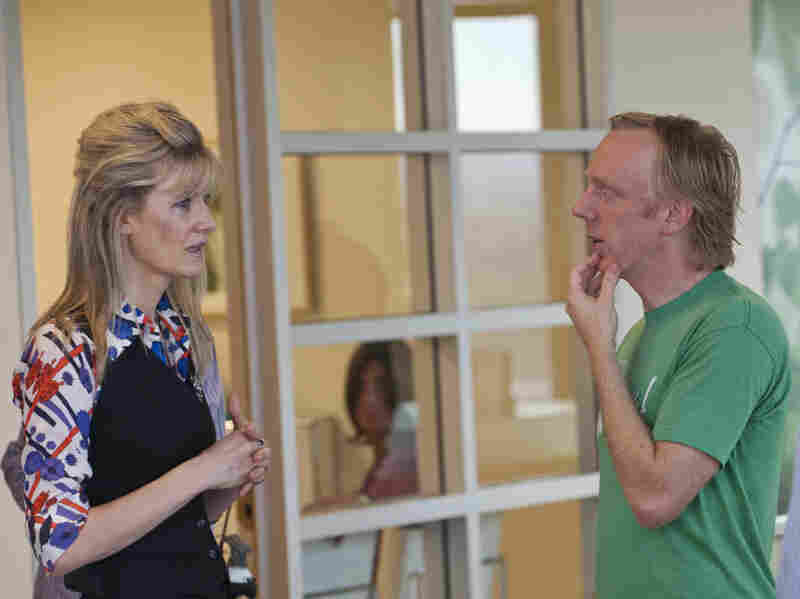 Laura Dern and series creator Mike White, shown together on the set of Enlightened, first worked together on White's 2007 film Year of the Dog. 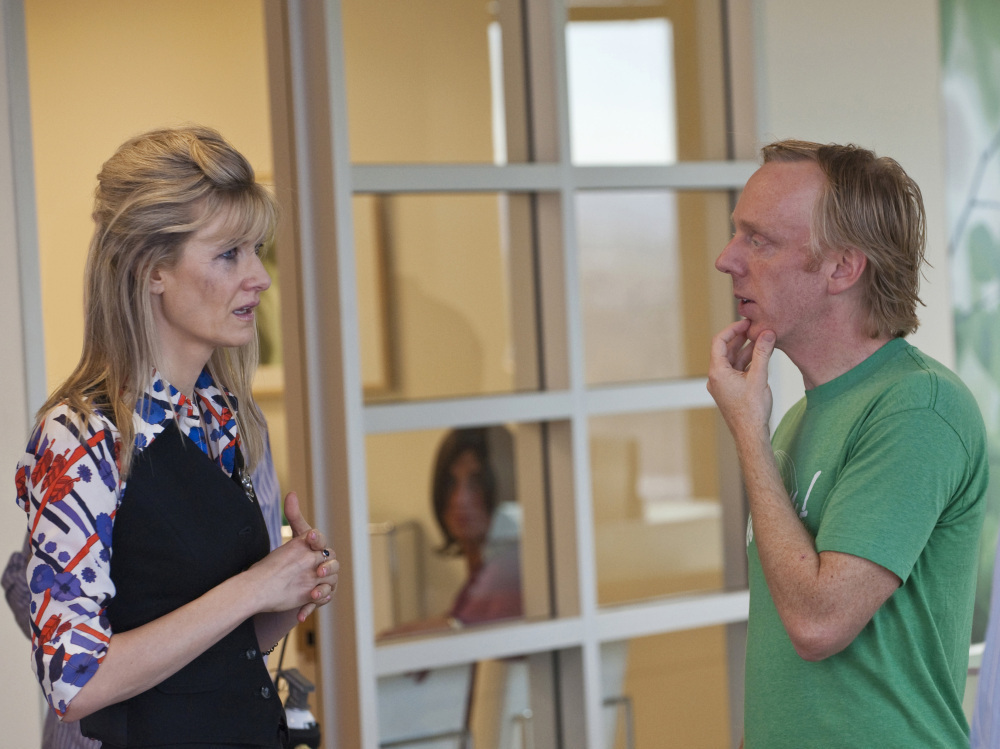 Laura Dern and series creator Mike White, shown together on the set of Enlightened, first worked together on White's 2007 film Year of the Dog.

This interview was originally broadcast on October 10, 2011.

Can people really change? That's the question Laura Dern and Mike White ask in their HBO series Enlightened, the second season of which begins Jan. 13. The show features Dern as Amy Jellicoe, an ambitious executive who has a nervous breakdown at her workplace. She goes to a rehabilitation center in Hawaii, where she experiences an awakening.

When Amy returns home, she wants to put her new philosophy into practice — meditating, communicating better with her mother (Diane Ladd), and fostering a healthier relationship with her ex-husband (Luke Wilson). But she finds her lessons of enlightenment being put to the test.

Show creator Mike White wrote the series and also directed some of the episodes. White and Dern join Fresh Air's Terry Gross for a conversation about Enlightened.

On the difficulties of meditating, and the challenge of creating a TV show about meditation

White: "From my experience, meditating can bring up the most stressful thoughts. ... To actually try to stop that constant chatter of, 'I need to do this, I need to do that ... this is what's wrong with me.' I think that's the hardest thing for many people to do, especially in our modern, achievement-oriented [environment].

"Everyone is running so manic, and what's interesting, too, is when we turned in the show, the more quiet, meditative aspects of the show made HBO the most nervous. Because people, especially in TV, first they want their comedies funny, and they want their dramas juicy and kind of operative, and this is very internal.

"Especially these moments Amy has when she's going inside and where it slows down a little bit, I think that that's just something in general that makes a network executive worry that you're going to lose your audience, and people are going to click off or change the channel. That's not what people are looking for when they're zoning out in front of the TV."

On whether people can really change

White: "I think there are certain ways that people are always themselves, but I do think people change. I feel like that is the hopefulness I think the show tries to get at. ... That's a big question both Laura and I have discussed throughout the entire shooting and writing of the show, you know ... how enlightened is Amy? If she's just a fraud ... and in the end .... hasn't really grown, then I think it is a cynical show. I feel like we're all human and nobody's perfect, and we're all sort of fumbling toward something better. But if we don't believe that we can change or get over ourselves, it's a pretty depressing resolution."

Dern: "Mike so beautifully writes about incremental growth, and I think so many film writers want to tackle this enormous growth where this villain becomes a hero in the hour and a half that we have with them. In the long form of this season, Mike has this opportunity of Amy having this longing for growth, and longing for some form of self-acceptance. ... So there's this complicated and elusive journey toward growth that she takes."

On the carefully calibrated tone of the show

White: "When HBO came to me, and when Laura and I started talking about a show together, I liked the idea of somebody who had come to the edge and then wanted to come back and get over themselves. We see the comic, flawed aspects of [Amy's] quest to be enlightened. But at the same time, if it was just a satire, taking her enterprise very cynically, I just think it would be an easy target, and it wouldn't be a show — it would be a skit or something. The tone of the show blends some of the wryness, which I naturally bring to writing stuff ... but also, there's a real sincerity to it."