Accessibility links
Free Toy Shop Brings Cheer To Sandy's Displaced Families Many Staten Island residents are still not back in their homes since Sandy washed ashore. Local volunteers have opened a toy store where FEMA-registered families with children can pick up donated toys, holiday decorations and stocking stuffers. Thus far, the shop has given away more than 2,000 toys. 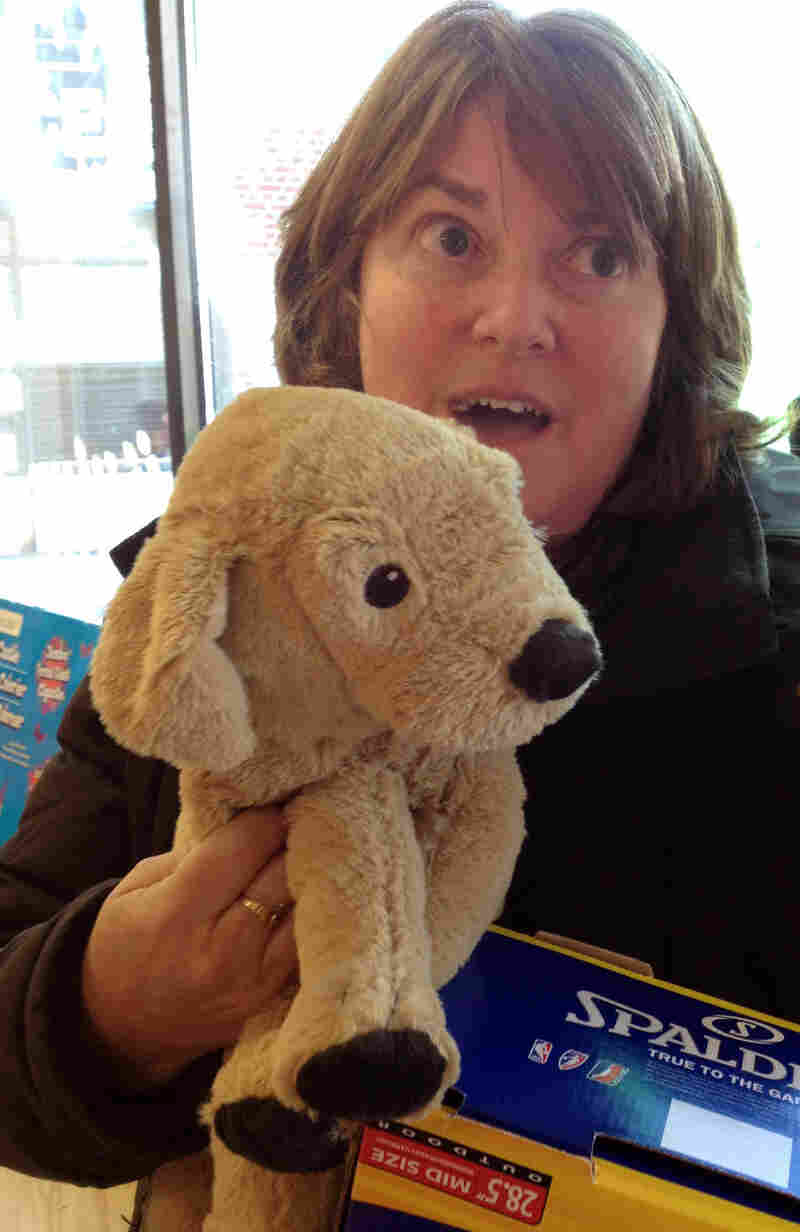 The New York borough of Staten Island was hard-hit by Hurricane Sandy. Almost two months after the storm hit, many residents will not be back in their homes by the Christmas holiday.

One organization is trying to make the season a bit brighter for uprooted families with a free toy store on the island. This all-volunteer effort looks like a real toy store, but it feels more like a community of neighbors.

The shop boasts shelves filled with toys like model cars, Monopoly, dolls, craft supplies and books — almost everything you would want in a regular toy store.

Waleska Bhatti, who has three children, points to a rocking horse a child can ride. "I got the little horsey for the baby and I got some dolls for the 7-year-old," Bhatti says.

Visitors get two toys for each child, but the rules aren't strict. "Look around. Choose six items," volunteer Madeline Bergin tells one mother. "If you can't decide let us know; we're very lenient. When you get to this part of the room there are stocking stuffers, [it's] unlimited — help yourself."

Bergin gives every shopper personal attention, asking each one if his or her family is back at home.

Shopper Grace Paterno has come by. She says she lost all her Christmas decorations in her shed — along with her everything in her home's first floor — in the storm. She picks some toys, but what she really wants, she says, is a tree.

She's in luck; someone has donated one, Bergin tells her.

Disaster Donations Surge, But What About Tomorrow?

"Oh thank you, God bless," says Paterno, near tears. Her family is still not back in their home, but she hopes to be there for Christmas morning, she says, "so my kids can open their presents."

There's a system when shoppers enter the store, but it takes less than a minute to get started with shopping. "We take their name, their address, their FEMA number, the amount of children," Bergin explains. "So far, we have had 405 families and we have given out 2,200 toys since we started."

The organization Where To Turn, which began after the Sept. 11 attacks, is behind this effort. Founder Dennis McKeon recalls that 29 people in the nearby Parish of St. Clare died in the World Trade Center.

Now the group takes on all kinds of tragedies, but it still has its roots in Sept. 11. Bergin lost her husband, a firefighter, that day. "Now it's my turn to sit behind a desk and help people, because people were so generous and kind to me," she says.

McKeon had the idea to collect toys for Sandy-affected children about six weeks ago. Rather than hold a one-time party, he says he thought, "let's open a store, so that we can give [toys] to more people." 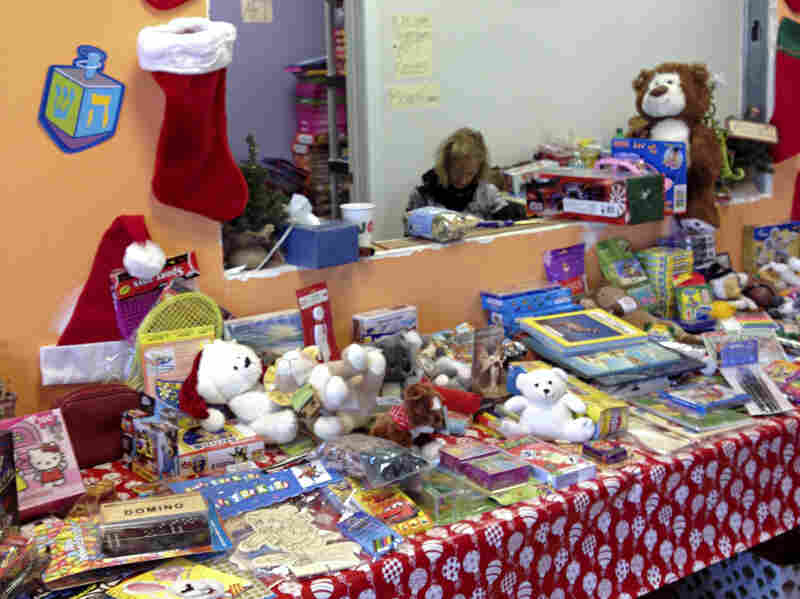 Each FEMA-registered family with kids can pick out toys at the volunteer-run Staten Island store. Margot Adler/NPR hide caption 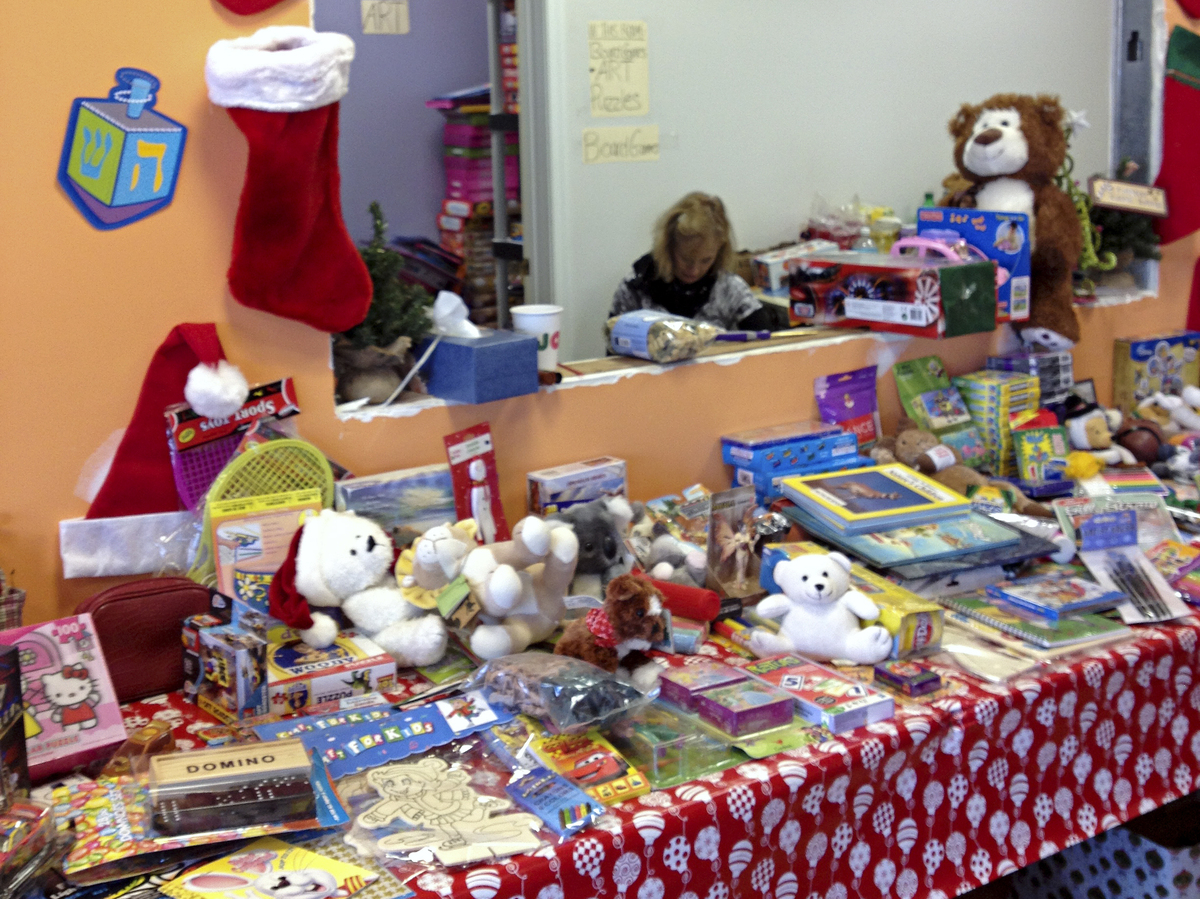 Each FEMA-registered family with kids can pick out toys at the volunteer-run Staten Island store.

He got the space for the shop from a union local. McKeon, who works for AT&T, is here on his lunch hour. "Everything you see in here is donated," he says, pointing around proudly. "The tables, the shelves, everything. We came in, we set it up as a toy store and the rest is history."

Donations have come from as far away from Massachusetts and upstate New York. In fact, Bergin says, "random people off the street just walk in with stuff."

Shopper Eileen Pepel clutches a soft beige stuffed animal in her arms."I got a basketball. I got gift cards. And I got this stuffed puppy, that's just such a love," she says.

"Be prepared," Pepel calls out to the volunteers. "I am bringing many people back to this store." And she has good reason: At least 13 of the destroyed homes on Staten Island belonged to her family, she says, and "at least six of them are my immediate family members."

Pepel's family members are still waiting for insurance to come in. But here in the toy shop, there's no bureaucracy, just human warmth and connection. There are even gift cards for older kids. See a stocking on the wall? It's yours if you want it.

As Bergin puts it, "we're giving away the whole store."