Accessibility links
An Urban Tree Farm Grows In Detroit How does a post-industrial city manage property that no longer generates tax revenue but still needs the grass cut? One entrepreneur says he has a solution: He's buying up 1,500 empty city lots and planting thousands of trees. But where backers see a visionary proposal, critics see a land grab. 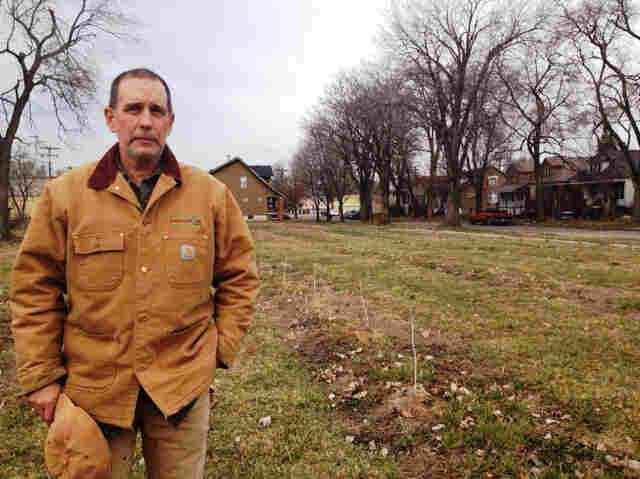 Mike Score, president of Hantz Farms, shows off a small-scare version of what Hantz Woodlands will look like. Sarah Hulett for NPR hide caption 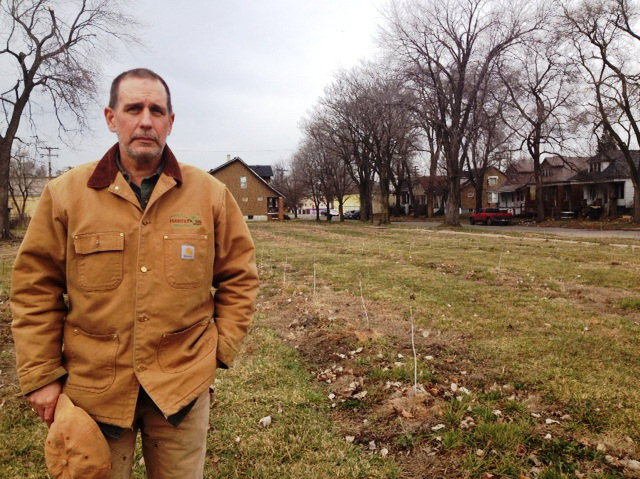 Mike Score, president of Hantz Farms, shows off a small-scare version of what Hantz Woodlands will look like.

An entrepreneur says he's got a plan to curb urban blight in parts of Detroit. He's buying up acre after acre of abandoned lots and planting thousands of trees. But where backers of the plan see a visionary proposal, critics see a land grab.

Entrepreneur and Detroiter John Hantz, owner of Hantz Farms and the tree-planting effort called Hantz Woodlands, wants to plant at least 15,000 trees on about 140 acres. Hantz promises to clear out all the trash and keep the grass cut, things the city cannot afford to do now.

At a demonstration area for the project, Mike Score of Hantz Farms shows off the progress made to transform the vegetation. It's basically a small-scare version of what Hantz Woodlands will look like.

"The brush is gone from alongside the road. There are still some houses, but the vacant space that used to be covered with tall vegetation and brush and garbage is clean," Score says.

It's cleaned up and filled with neat rows of small hardwood trees — oaks and sugar maples.

The company is paying $300 for each lot. And that price tag has raised some eyebrows. Some residents can see only a speculator getting a sweetheart deal from a city desperate for money and development ideas.

"If the city is going to give away land at bake sale prices, give it to the people first," says Matthew Greenia, one of dozens of people who spoke out against the project at a public hearing earlier this month. He and others say the city should have put the land into a public trust instead.

"Right now there's so much land that it's possible to do that, too," says Margaret Dewar, an urban-planning professor at the University of Michigan. Dewar says sure, some of Detroit's vacant land can be put into public trust for residents or community groups. But she says there aren't enough groups to handle the massive amount of vacant land here.

Score says that while thousands of trees won't reverse the fortunes of this hardscrabble neighborhood, he hopes it will stabilize things.

"And if nothing gets done, if everything in the city looks like the area across the street where the blighted houses are located, the people who live here will want to leave, but nobody will buy their houses and they'll feel trapped," he says.

The project will buy 1,500 city lots. That still leaves more than 58,000 parcels the city owns but can't afford to manage. That means plenty more opportunities for unorthodox ideas about what to do with Detroit's most abundant resource.