Accessibility links
Democrats Slam NRA's Response To School Shooting After initially remaining silent about the mass shooting at Sandy Hook Elementary, the NRA called for placing armed guards at all of the nation's schools. Critics said the remarks were tone-deaf and not a way for the group to be a constructive part of the debate about gun violence. 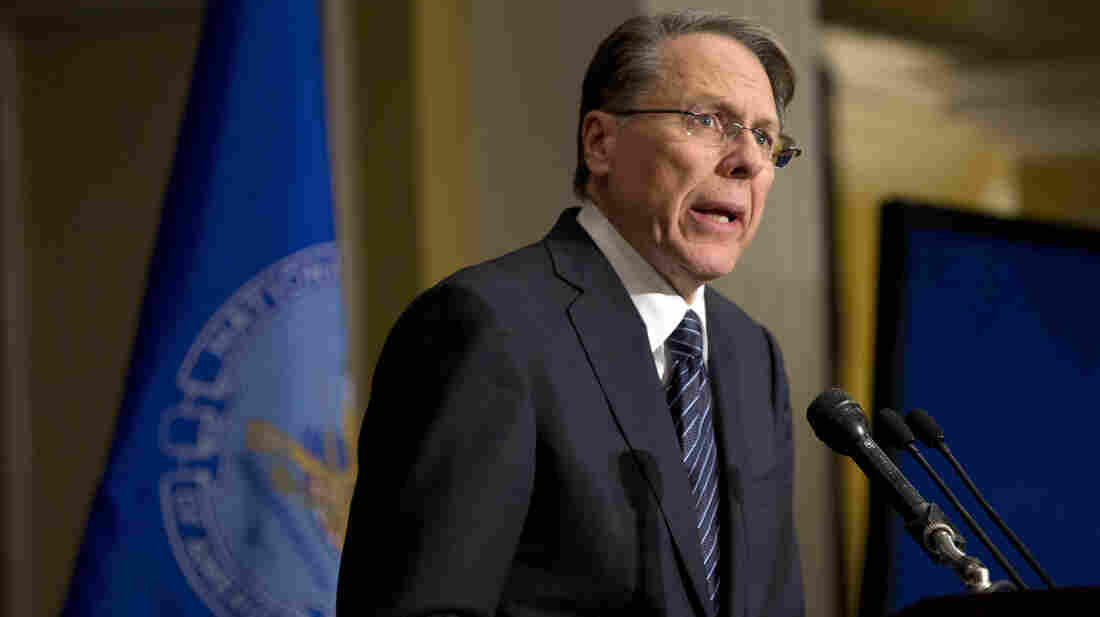 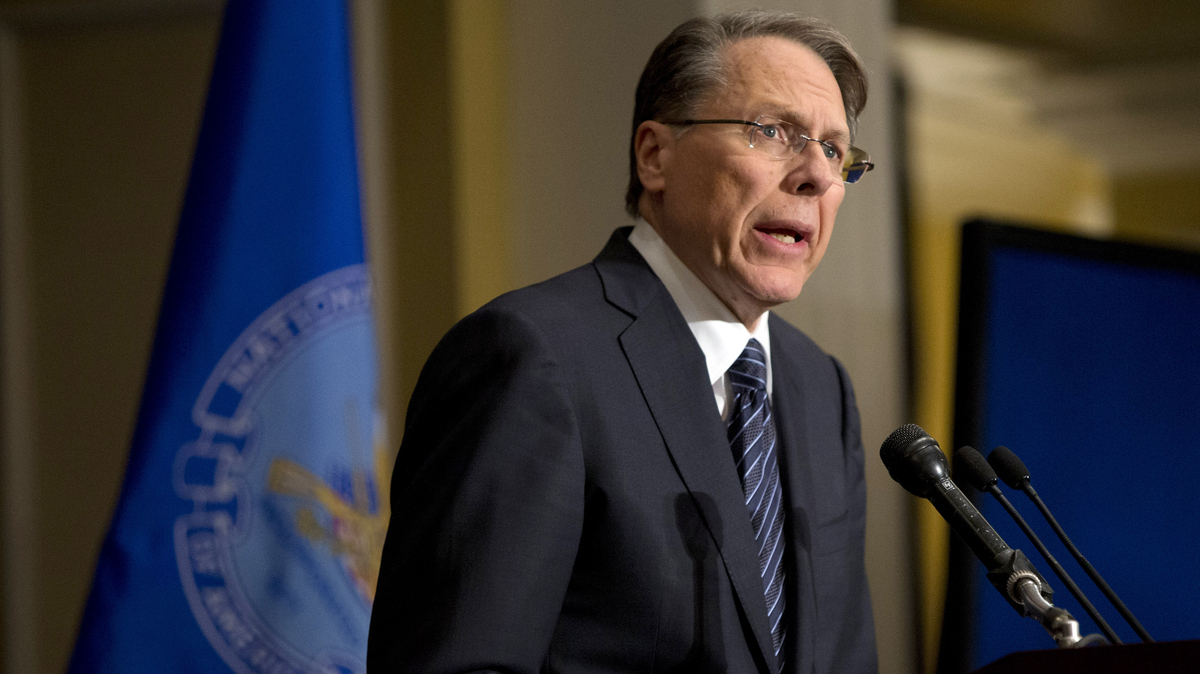 Wayne LaPierre, the National Rifle Association's executive vice president, speaks in response to the Connecticut school shootings, at a news conference in Washington on Friday.

The nation's largest gun owners group had said little in the immediate aftermath of the shootings at Sandy Hook Elementary School in Newtown, Conn. But the National Rifle Association's executive vice president, Wayne LaPierre, broke that silence Friday with a call to place armed guards at all of the nation's schools.

The idea was met with immediate criticism from Democrats in Congress.

At a Washington event billed as a news conference — although reporters were denied the opportunity to ask questions — LaPierre expressed the group's horror, outrage and grief at the shootings. Then he said the only way to stop "a monster from killing our kids" was with what he called a plan of absolute protection.

The NRA chief's statement was interrupted twice by protesters — including one who said the NRA had blood on its hands.

In response to LaPierre, California Sen. Dianne Feinstein noted that about a third of the nation's schools already have armed guards.

For NRA, There's Nothing To Debate About Guns

"Is this the answer? That America should become an armed camp?" said Feinstein, who is sponsoring legislation to reinstate a ban on assault weapons. "I don't think so, and I don't think that's the American dream."

Sen. Richard Blumenthal, D-Conn., said if the NRA wants to be part of the national conversation about gun violence, it's not doing itself any favors. "The NRA today in its approach will be irrelevant," he said, "because it can't be a credible and constructive participant in this debate if it says the only acceptable solution is armed guards in schools."

The NRA has long been known as one of Washington's most powerful lobbies. It has been a prolific contributor to political candidates and has waged public campaigns against renewal of the assault weapons ban.

It has also been active in limiting the reach of the Bureau of Alcohol, Tobacco, Firearms and Explosives, which enforces federal gun laws. The NRA was behind efforts to limit access to a database used to trace weapons.

William Vizzard, a former ATF agent, says the NRA is worried the government wants a national gun registry. "A lot of those folks are very paranoid about what they consider registration," he said. "But to a large extent, it was an attempt to undercut the ability of the press and other entities to write stories about this and various local municipal jurisdictions filing suit and so on."

The ATF has been without a permanent administrator since the Bush administration, in part because of NRA opposition. It has also been able to keep funding for the agency flat.

But Vizzard, who teaches criminal justice at Sacramento State, says it's not so much the number of agents as it is the restraints they're under. "ATF could have 10,000 agents. It doesn't essentially mean they'd be able to produce a lot better results because they don't have the statutory authority," he said. "They even restricted the number of times they can inspect a dealer per year."

This week, some lawmakers whom the NRA had previously given "A" grades have expressed an interest in broaching gun issues for the first time. How far they will get is unclear, but their willingness suggests the NRA's aura of invincibility may be showing some cracks.