Accessibility links
Adoption Ban Puts Orphans At Center Of U.S.-Russia Dispute Russian lawmakers are trying to bar Americans from adopting Russian children. It's meant as retaliation against unfavorable U.S. legislation, but opponents of the ban say it treats Russian children as pawns in a political game. 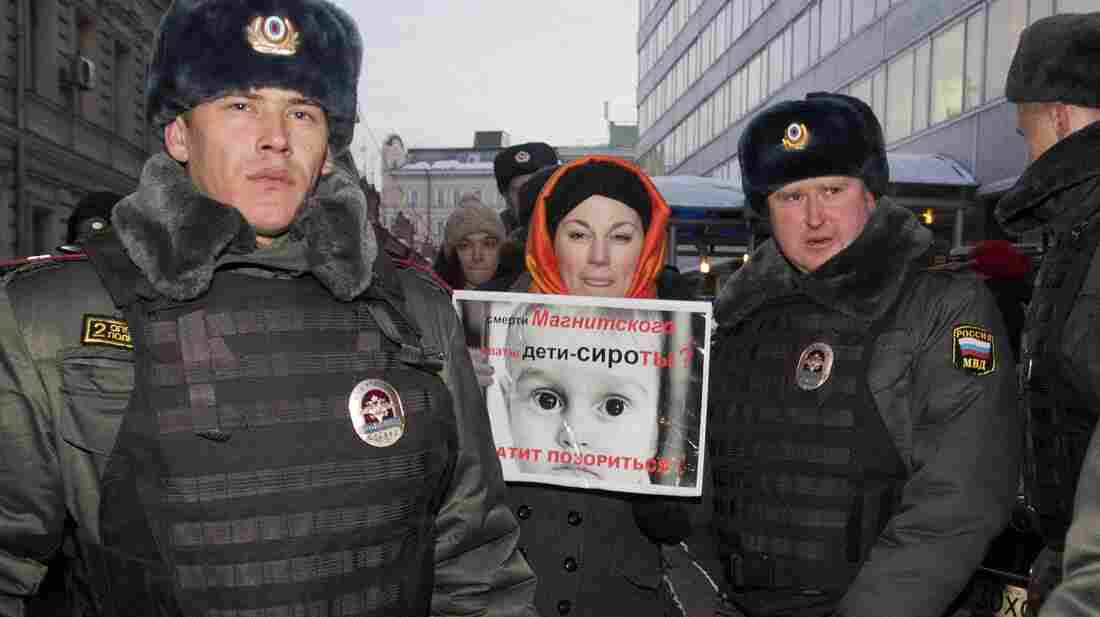 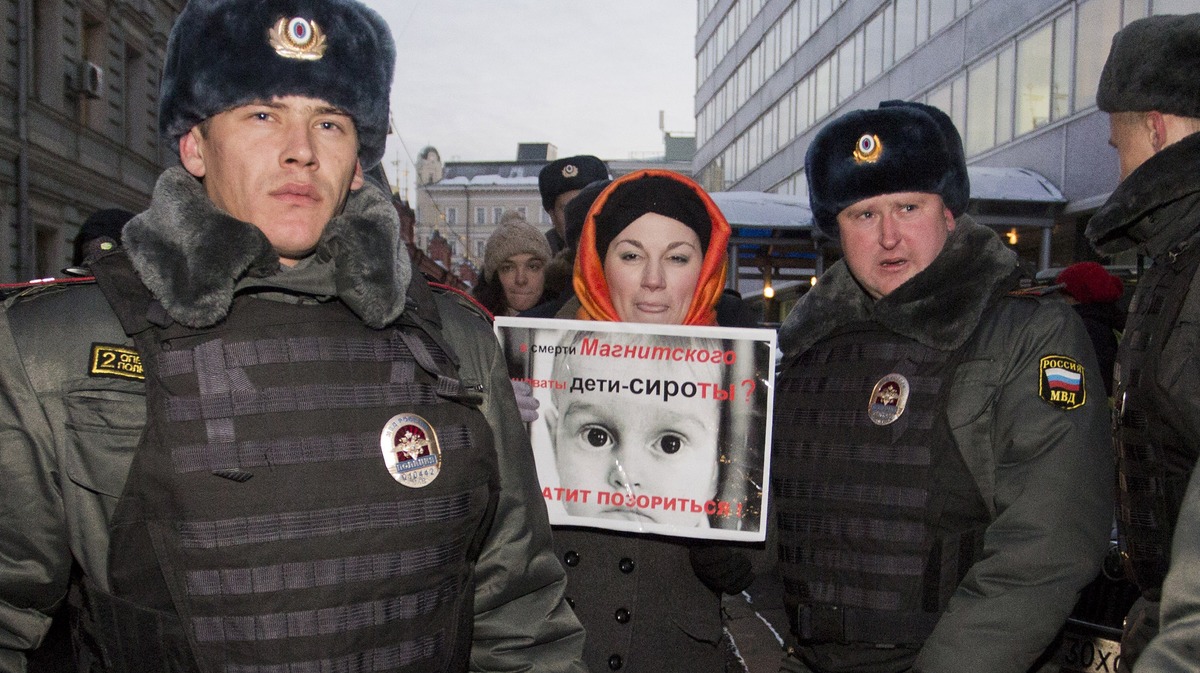 Police officers detain a protester outside the lower house of Russia's parliament on Wednesday. This week, Russian legislators passed a bill banning Americans from adopting Russian children after the U.S. passed a law that rebukes Russia for human rights abuses.

Russian lawmakers have approved a measure that would bar Americans from adopting Russian children, a move that comes in retaliation for a U.S. law that seeks to "name and shame" Russian officials who violate human rights.

President Vladimir Putin has voiced support for the adoption ban, but it's not clear whether he'll actually sign the measure, which has potential pitfalls.

As the Duma, the lower house of Russia's parliament, prepared for the final vote on the adoption ban, opponents of the measure stood in the subzero cold outside holding picket signs. Milana Minayeva's sign read: "Don't deprive children of their lives."

"I think [the] upcoming law is outrageous," Minayeva says. She says it's not right to make it impossible for children who have neither help nor parents to have any future at all.

Minayeva is a television producer, not an adoption activist, but she echoes the stance of many critics who say that orphans and adoptive parents should not be used as pawns in a political game.

The process of retaliation in the Duma taps into some deep and long-standing resentments on the part of Russian officials. Putin let some of that anger show in his yearly press conference this week. 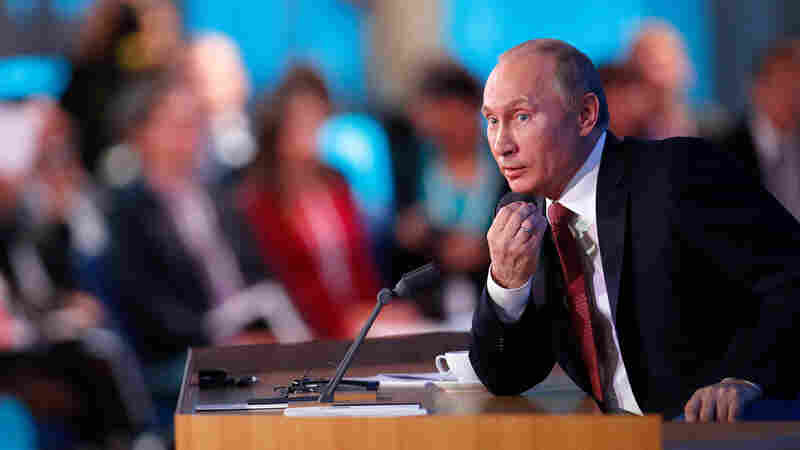 Russian President Vladimir Putin speaks during a news conference in Moscow on Thursday. Putin has voiced support for a measure that would ban U.S. adoptions of Russian children. Misha Japaridze/AP hide caption 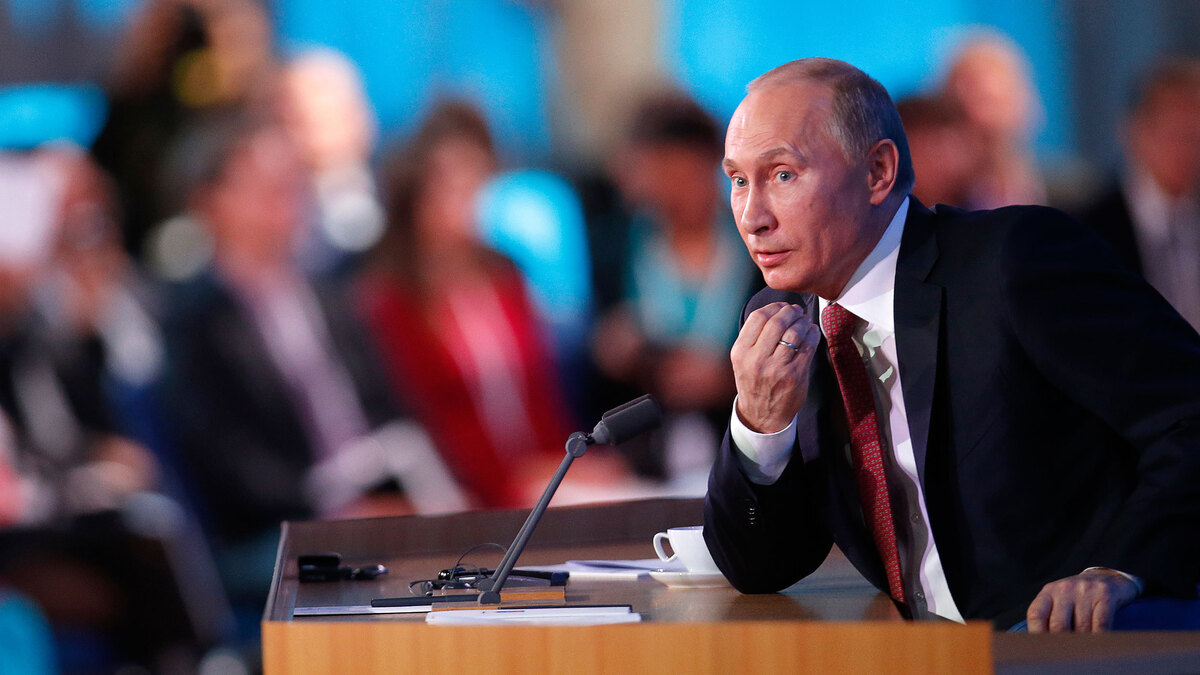 Russian President Vladimir Putin speaks during a news conference in Moscow on Thursday. Putin has voiced support for a measure that would ban U.S. adoptions of Russian children.

The Russian leader charged that the United States has denied Russian officials the chance to monitor the welfare of Russian adoptees in American families.

"Do you think this is normal?" Putin demanded. "How can it be normal when you are humiliated? Do you like it? Are you a masochist? They shouldn't humiliate our country."

For many Russian officials, the mere fact that so many Russian children have been adopted by foreigners is a humiliation, an admission that Russia is not able or willing to take care of its own children.

Although Americans have adopted more than 45,000 Russian children since the fall of the Soviet Union, some Russian officials prefer to dwell on the fewer than two dozen cases where adopted children have been mistreated or even killed.

Part Of A Larger Rebuke

The anti-adoption provision is only one part of the new Russian legislation, however, and the entire package is designed as retaliation for an American trade law that President Obama signed earlier in December.

The legislation contains a provision aimed at what many in the U.S. Congress consider a shocking human rights violation: the death of a Russian lawyer named Sergei Magnitsky.

Human rights groups contend that Magnitsky was arrested, tortured and denied medical treatment for nearly a year after exposing a massive tax fraud by Russian officials. He died in prison in 2009, at the age of 37.

The Magnitsky legislation calls for sanctions against dozens of Russian officials who were allegedly involved in that case. Russian officials, from Putin on down, say that provision is interference in Russia's internal affairs.

America criticizes Russia, they say, while the U.S. commits violations of its own, from Abu Ghraib prison in Iraq to Guantanamo Bay in Cuba.

"If the Magnitsky law stipulates that it is about human rights, then we say Russian kids in the U.S. also have human rights, and Russia has a right to adopt a law that will defend those human rights," says Alexei Pushkov, chairman of the parliamentary committee on foreign affairs.

The Fate Of The Children

Adoption advocates in Russia say the ban would violate international treaties, including the United Nations Convention on the Rights of the Child.

Boris Altshuler, director of the Rights of the Child NGO in Moscow, says the real victims will be children.

"If thousands of children do not go to the [United States], then they will be locked in Russian institutions," Altshuler says.

Altshuler says the ban would hit hardest at Russian orphans with mental or physical disabilities because American families have historically been more willing to take such children.

So far, Putin has been noncommittal about whether he would sign the new measure.

At his news conference, he noted that the existing adoption agreement with the United States requires a year's notice before either country can withdraw.

Putin also acknowledged that the parliament must consider an online petition in which more than 100,000 Russians asked that the adoption ban be rejected.