Accessibility links
Near-Replica Of Sandy Hook Made Nearby For Students The surviving students of the shootings in Newtown, Conn., won't be returning to their old school. From the wall paint to the desks, a soon-to-be reopened school in Monroe is meant to feel familiar for Sandy Hook kids. 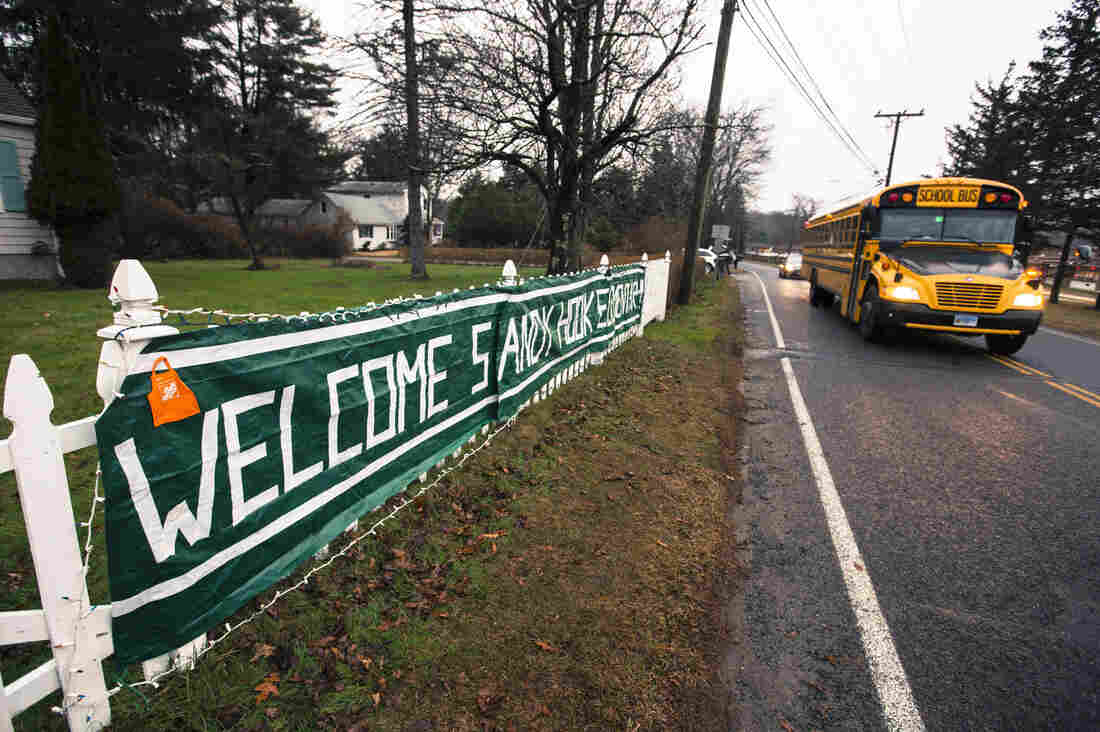 A school bus drives past a welcome sign near the Chalk Hill Middle School in Monroe, Conn. Students from Sandy Hook Elementary in neighboring Newtown will attend the school in January. Lucas Jackson/Reuters/Landov hide caption 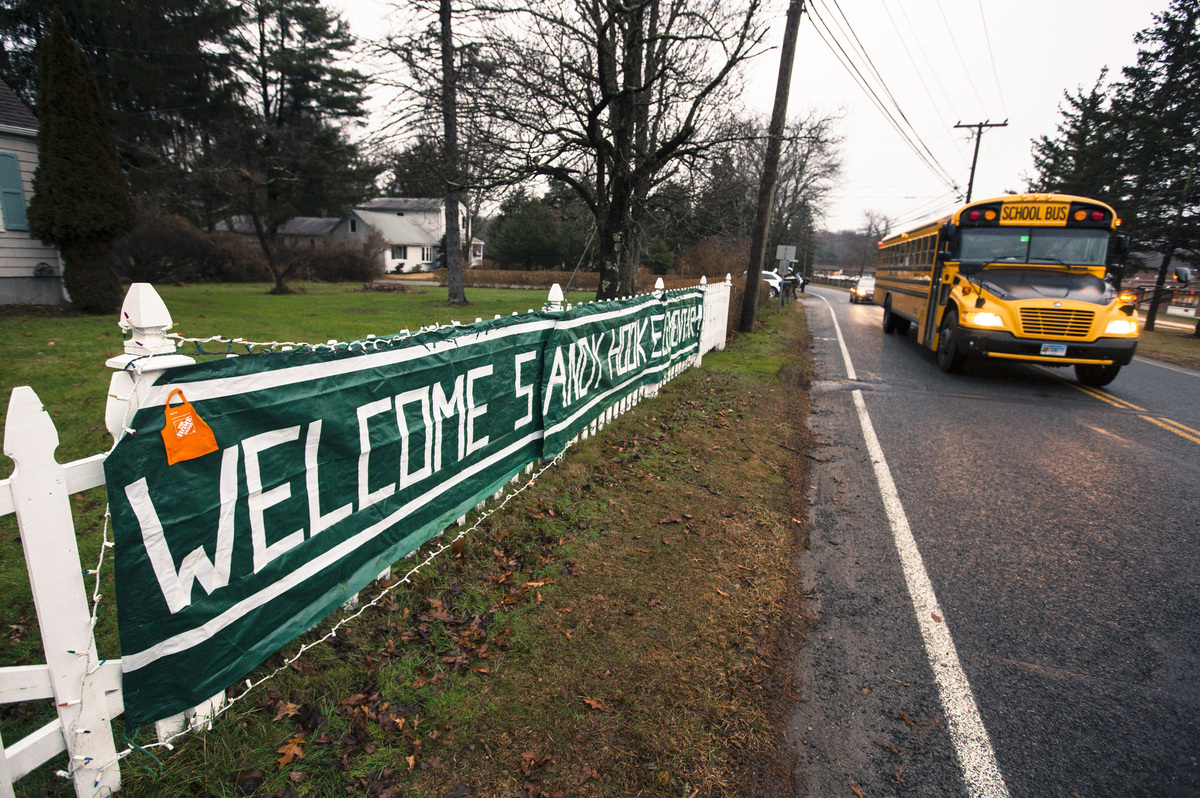 A school bus drives past a welcome sign near the Chalk Hill Middle School in Monroe, Conn. Students from Sandy Hook Elementary in neighboring Newtown will attend the school in January.

The surviving students of Sandy Hook Elementary will not be returning to their school in Newtown, Conn., where 20 first-graders and six educators were shot to death on Dec. 14.

Instead, when classes resume after the holidays, they'll attend a school in the neighboring town of Monroe. Parents, teachers and administrators in both towns are working to make the new school as similar as possible to the one Sandy Hook students left behind.

The Monroe Congregational Church is helping prepare for the transition. The church has collected at least 300 stuffed animals, says congregant and volunteer Cynthia Robinson. She says the idea for a stuffed animal drop-off came from a desire to lend aid and comfort to the town of Monroe's neighbors in Newtown, just 6 miles away.

The hope is to have the cuddlies waiting for Sandy Hook students when they come to their new school here in Monroe.

"That would be the ideal thing, would be to have one on every desk when they come into school that first day," Robinson says.

The students' desks are the very same ones they had in Sandy Hook before the shooting, moved to a school that Monroe closed two years ago due to declining enrollment.

"The only word I can use is a 'miracle,' " says Monroe first selectman Steve Vavrek. 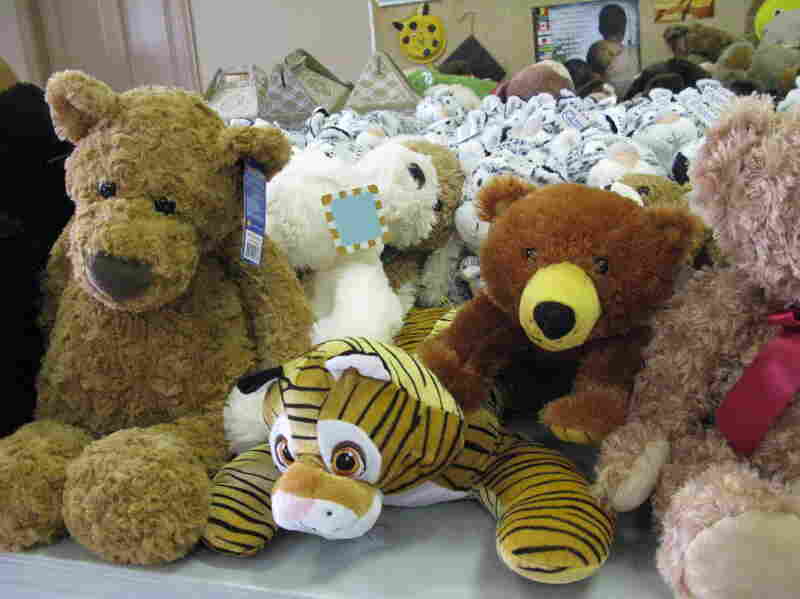 Hundreds of stuffed animals await Sandy Hook students, who will be attending a new school in a neighboring town in January. David Schaper/NPR hide caption 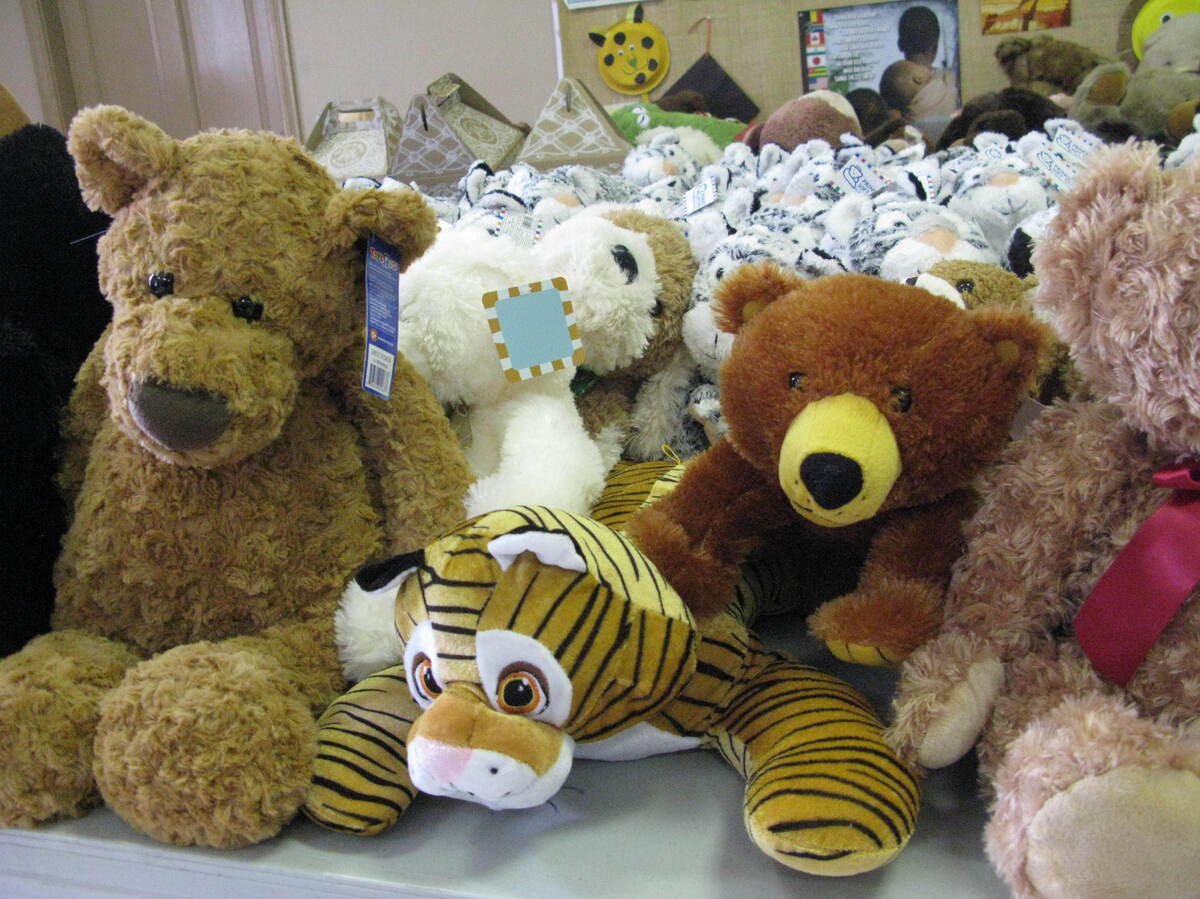 Hundreds of stuffed animals await Sandy Hook students, who will be attending a new school in a neighboring town in January.

He says a deal was done and the building prepared for Sandy Hook's small students surprisingly fast; the former middle school is now basically an elementary school.

Vavrek says movers, plumbers, carpenters, electricians and painters, many of them volunteers, have been working around the clock to bring the building up to code and turn it into a near-replica of the Sandy Hook school.

"Every class is pretty much meticulously rendered to look exactly like when the kids left it, right down to the water bottles on the desk," he says. "Everything that that child left — and remember, they left without their coats, their backpacks, their water bottles, anything."

Vavrek says the walls are now painted the colors of Sandy Hook's. All the same posters, artwork, smart boards, even cubby holes are going into the classrooms, too.

"Right down to the sign they're going to see outside is their sign. I guess, for their sake, they've been through enough," he says. "A couple of kids are apprehensive, but as soon as they walk around the school, the first thing they say is, 'Wow, our gym is bigger,' or 'Wow, our cafeteria's now bigger' ... It's 'our,' they're already saying 'our.' That shows the resilience of kids because ... they already know it's theirs."

In the Sandy Hook home of Karen Dryer, the greeting of golden retriever Eli is comforting to a family still reeling from the tragedy. Dryer has a son who is a Sandy Hook kindergartner. She's also an educator helping prepare the classrooms in the Monroe school.

Dryer says a return to normalcy is vital for children. "They thrive on schedules and they like structure," she says. "It's very important, and especially the young children — when you're talking kindergarten through third or fourth grade — they really need to feel safe."

For Dryer, the best news is that a familiar face will lead the new school: retired Sandy Hook principal Donna Page is coming back to replace Dawn Hochsprung, who was killed.

But Dryer worries about the school in Monroe being at least a 15-minute drive away from Sandy Hook.

"I felt comfortable that the [Sandy Hook] school was right down the road from me and I could be there in an instant, like I was on Friday," she says. "This school's a distance, so we can't be there in five minutes. So that's ... a little scary."

Monroe first selectman Vavrek and his police department promise tight security, saying it may be the safest school in the country when Sandy Hook students arrive there in the first days of January.