Accessibility links
Movie Reviews - 'Les Miserables' - In Paris, Misery And Music Blended For The Big Screen Tom Hooper's adaptation of the musical Les Miserables — itself an adaptation of Victor Hugo's classic novel — is solidly effective. Critic Ian Buckwalter says performances from Broadway veterans as well as non-singers deliver a range of interest and a breadth of talent.

In Paris, Misery And Music Blended For The Big Screen

In Paris, Misery And Music Blended For The Big Screen 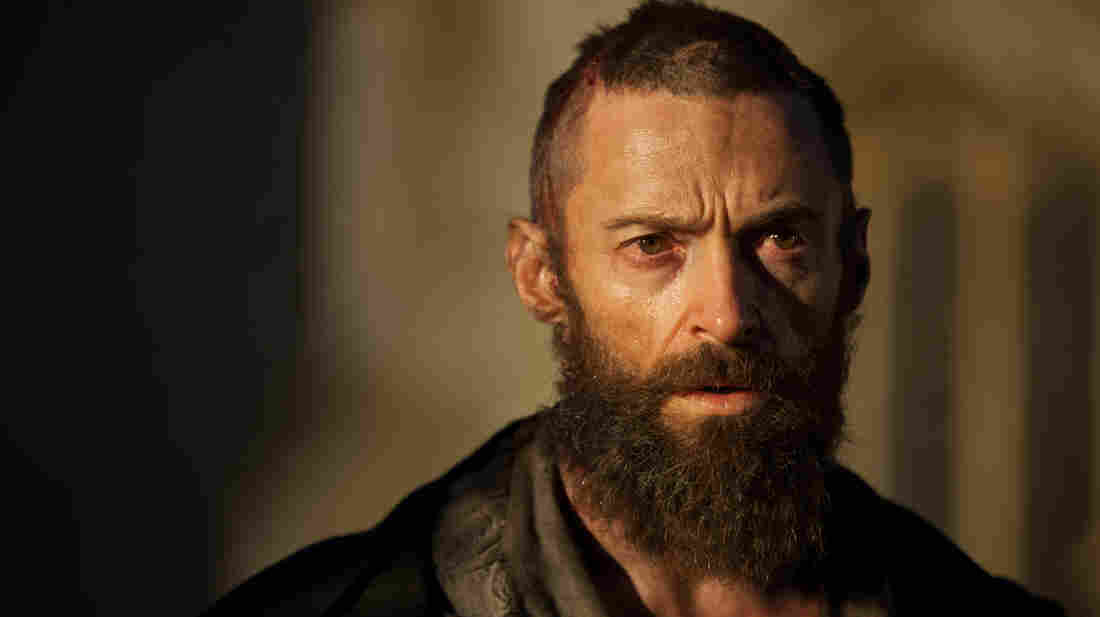 Half an hour into Tom Hooper's adaptation of the long-running stage musical Les Miserables, he fixes his camera on Anne Hathaway's tortured, tear-streaked face, and she delivers what ought to become one of the great moments in musical cinema history — right up there with Dorothy singing wistfully of a land far away, Gene Kelly swinging happily around damp lamp poles, and a problem like Maria singing to the grassy Austrian hillsides. She's that good.

It's also Hathaway's last big moment in the movie, as the single-mother-turned-prostitute Fantine, who dies early in the story. It's a testament to the performances delivered by the actors in the film's bigger roles that the remaining two hours aren't spent wishing for more Fantine.

It's also a testament to the strength of Claude-Michel Schonberg's music that everything after the show-stopping lament of Fantine's "I Dreamed a Dream" doesn't come across as so much padding.

Schonberg's diverse songwriting has always been the show's greatest asset, matching the impressively epic scope of the story — adapted from Victor Hugo's gargantuan historical novel about the lives of a number of interconnected characters in the years leading up to the 1832 June Rebellion in Paris — with an equally impressive range of musical styles. Huge patriotic anthems coexist alongside wistful love songs, comic barroom pieces with tragic laments, the joints smoothed over by the composer's habit of frequently echoing themes and familiar bits of melody. There's plenty of opportunity for those musical quotes too, as the work is nearly devoid of spoken dialogue, through-sung with recitative sections connecting the larger pieces.

Hooper makes some interesting casting decisions, blending accomplished musical theater actors with some not known for their voices. Broadway veteran Hugh Jackman takes on the central role of Jean Valjean, the honorable ex-con around whom all these other lives seem to revolve. Samantha Barks is the only actor here to reprise a role she played onstage, as Eponine,the daughter of two crooked innkeepers — Helena Bonham Carter and Sacha Baron Cohen, in excellently conceived comic casting. Hathaway stands out as an actor not generally associated with musicals; others in that category not so much, like the slightly too-warbly Amanda Seyfried as Fantine's daughter Cosette, and thin-voiced Eddie Redmayne as the revolutionary romantic Marius, who falls for her. Then again, their love-at-first-sight romance is the least interesting subplot of the film, so it's difficult for them to rise above the blandness of their story. 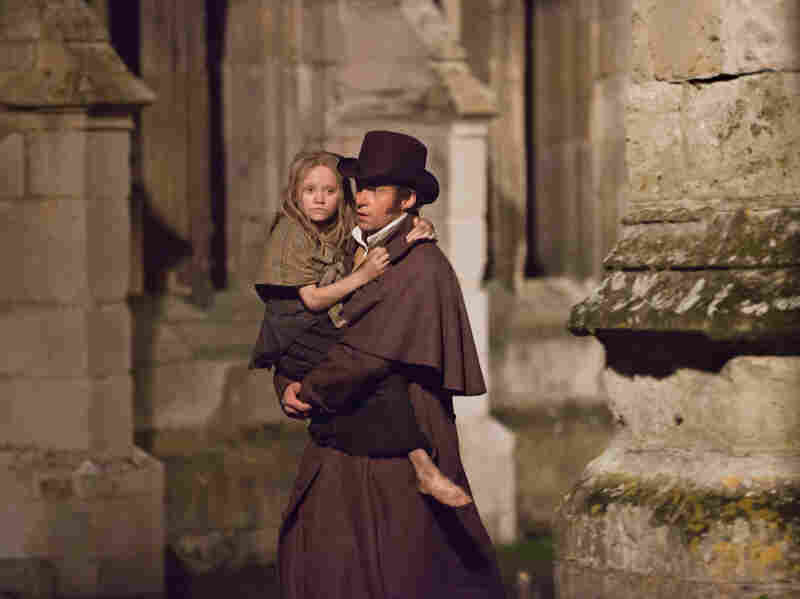 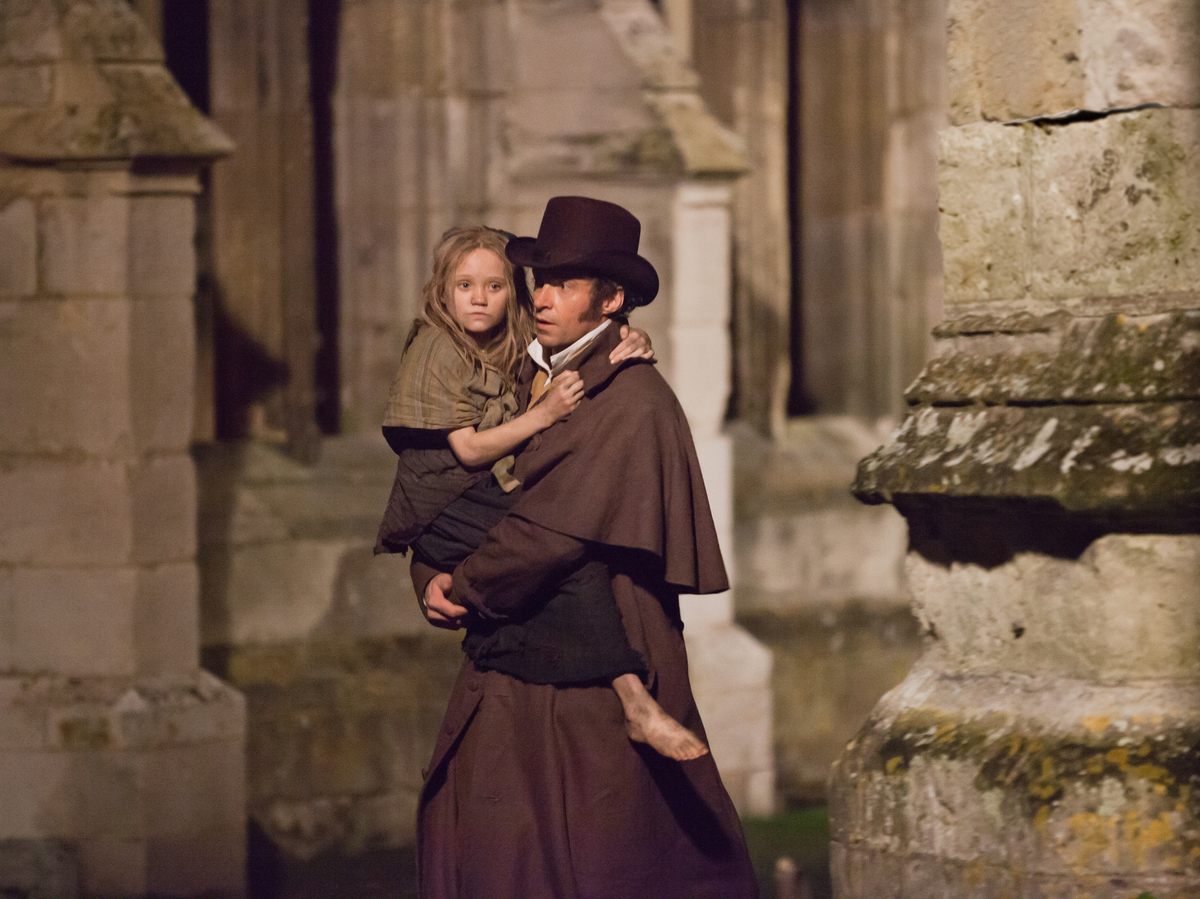 Jean Valjean and young Cosette (Isabelle Allen), two of the most iconic characters in contemporary musical theater, come to the big screen.

The biggest surprise though may be Russell Crowe as Javert, the dogged inspector who tracks Valjean over the 17 years covered by the film. At first listen, Crowe sounds miscast, a barroom singer put on a stage too large. Yet his brutish vocal presence tends to fit Javert, who is in many ways the movie's most fascinating character, a man who plays an instrument of blind justice when he's really carrying out a lifetime of revenge for the sins of his parents. His transformation from emotionless oppressor to penitent man is the film's most significant character journey, and a fitting personal face for the political strife that forms the story's backdrop.

Part of the success of the performances in the film owes greatly to Hooper's decision to record the actors singing on set, rather than have them lip-sync to pre-recorded tracks, the usual method for filming musicals. The technique works exactly as intended: The actors, freed from having to match a vocal performance from weeks or months prior, are able to live in the moment. The impact on the emotional immediacy of the songs is striking.

Unfortunately, if Hooper is to take credit for what that technique adds to the film, he also takes the fall for failing to match that innovation visually. Too many songs are shot in long, single-shot close-ups of the actor singing; the intent may have been to further showcase the performance (and to keep the actors from running out of breath — witness Redmayne's dodgy vocal performance while forced to walk and sing during "In My Life"), but in practice it makes the movie visually static when everything about it is constantly moving. It takes an expansive epic and stuffs it into a too-restrictive frame.

The movie also suffers somewhat from the obvious skimping on digital effects. Digital backdrops and establishing shots are used frequently, and none look convincing. When Javert walks the edge of the Parisian rooftops during "Stars," it's difficult to take the danger seriously when it's so obvious he's only at risk of falling onto a green screen covered over with digital images.

Luckily, it's hard to concentrate on anything but Crowe in that moment, as he delivers one of his best performances in recent memory here. That's how it goes with the rest of the movie too, as the music and the magnetic performances make many of the directorial missteps fade into the background.