Accessibility links
Hagel Would Be First Former Enlisted Soldier To Run Pentagon President Obama may nominate former Nebraska Republican Sen. Chuck Hagel to be the next defense secretary. The Vietnam veteran could bring a bipartisan presence to Obama's Cabinet, but only if he survives opposition from some in his own party. 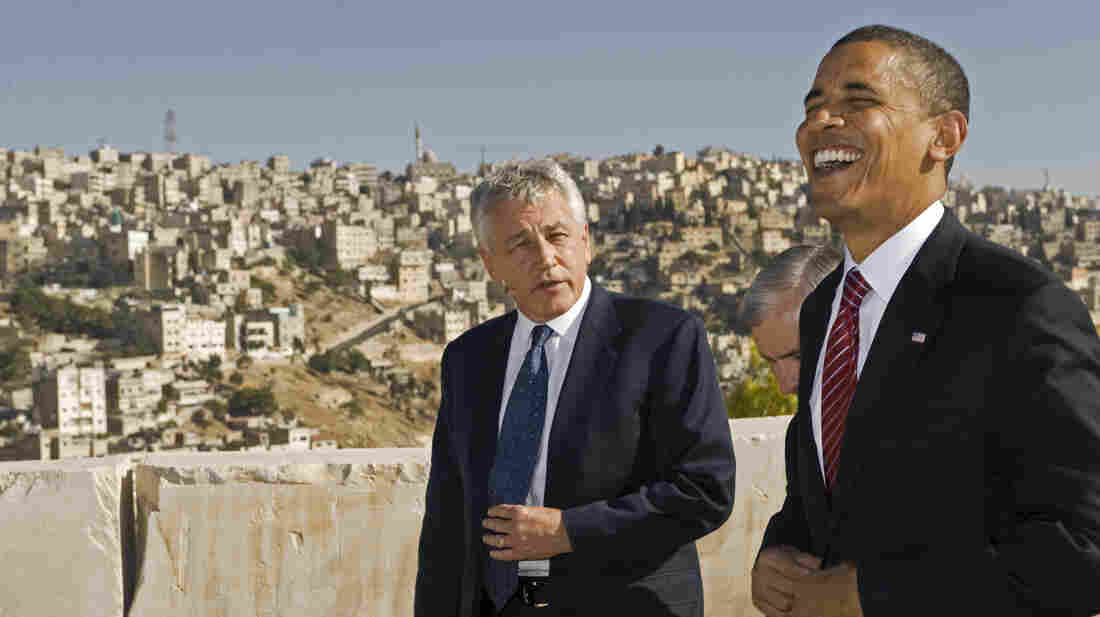 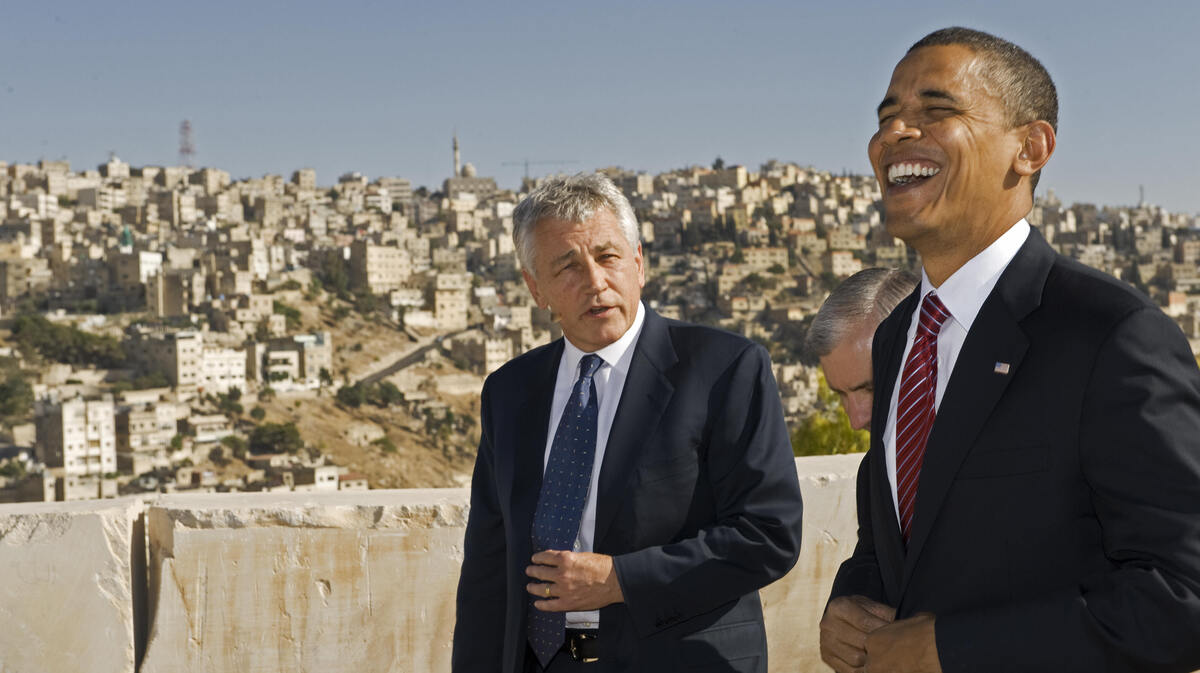 Former Republican Sen. Chuck Hagel of Nebraska is said to be on President Obama's short list to be the next defense secretary. But even the possibility of his nomination has stirred up opposition — particularly from members of his own political party.

If Hagel can survive a political ambush in Washington, he would be the first Pentagon chief who saw combat as an enlisted soldier.

The blunt-spoken Hagel favors deeper cuts in military spending and is wary of entangling America in long overseas missions.

In January 2007, Democrats on the Senate Foreign Relations Committee were fighting President Bush's plan to send more troops to Iraq. Hagel was the only Republican to join them, and he blasted those who refused to take a stand.

"Why are you elected?" Hagel asked. "If you wanted a safe job, go sell shoes. This is a tough business. But is it any tougher, us having to take a tough vote, express ourselves, and have the courage to step up, than what we're asking our young men and women to do? I don't think so."

Hagel knew better than most what America was asking of its young men and women. Forty years earlier he'd fought in Vietnam with his brother Tom.

They served in the same unit. On patrol one morning in 1968, Chuck was hit by shrapnel in the chest, and Tom rushed to help him. A month later, Chuck saved Tom, pulling him from a burning vehicle. Between them the two brothers earned five Purple Hearts. 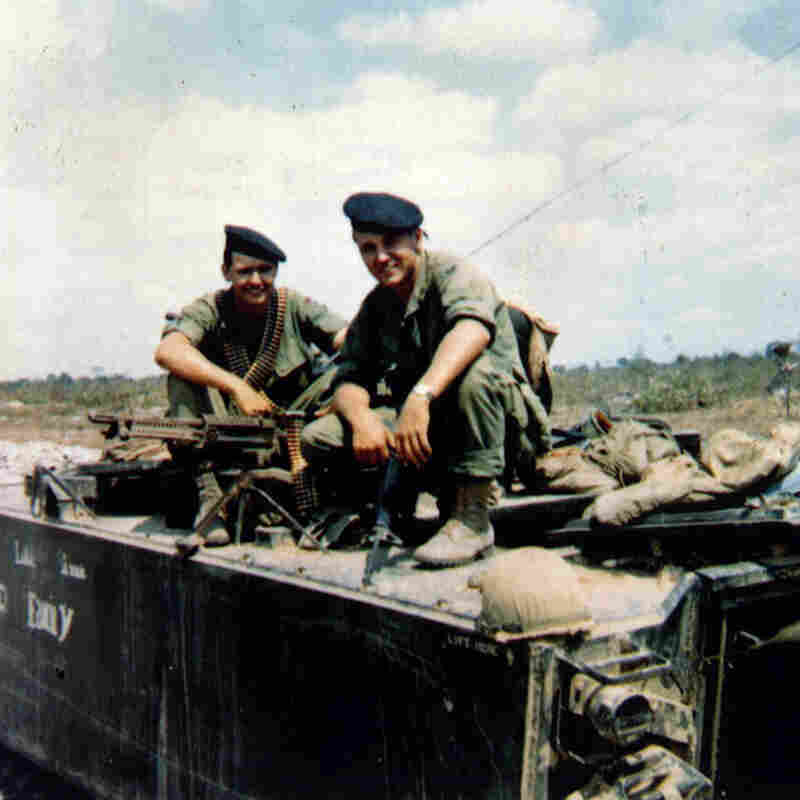 Chuck Hagel (right) and his younger brother Tom sit atop an armored personnel carrier in Vietnam, in a photo taken in or around 1968. The Hagel brothers were squad leaders with the U.S. Army's 9th Infantry Division in the Mekong River Delta. Photo provided by Library of Congress/AP hide caption 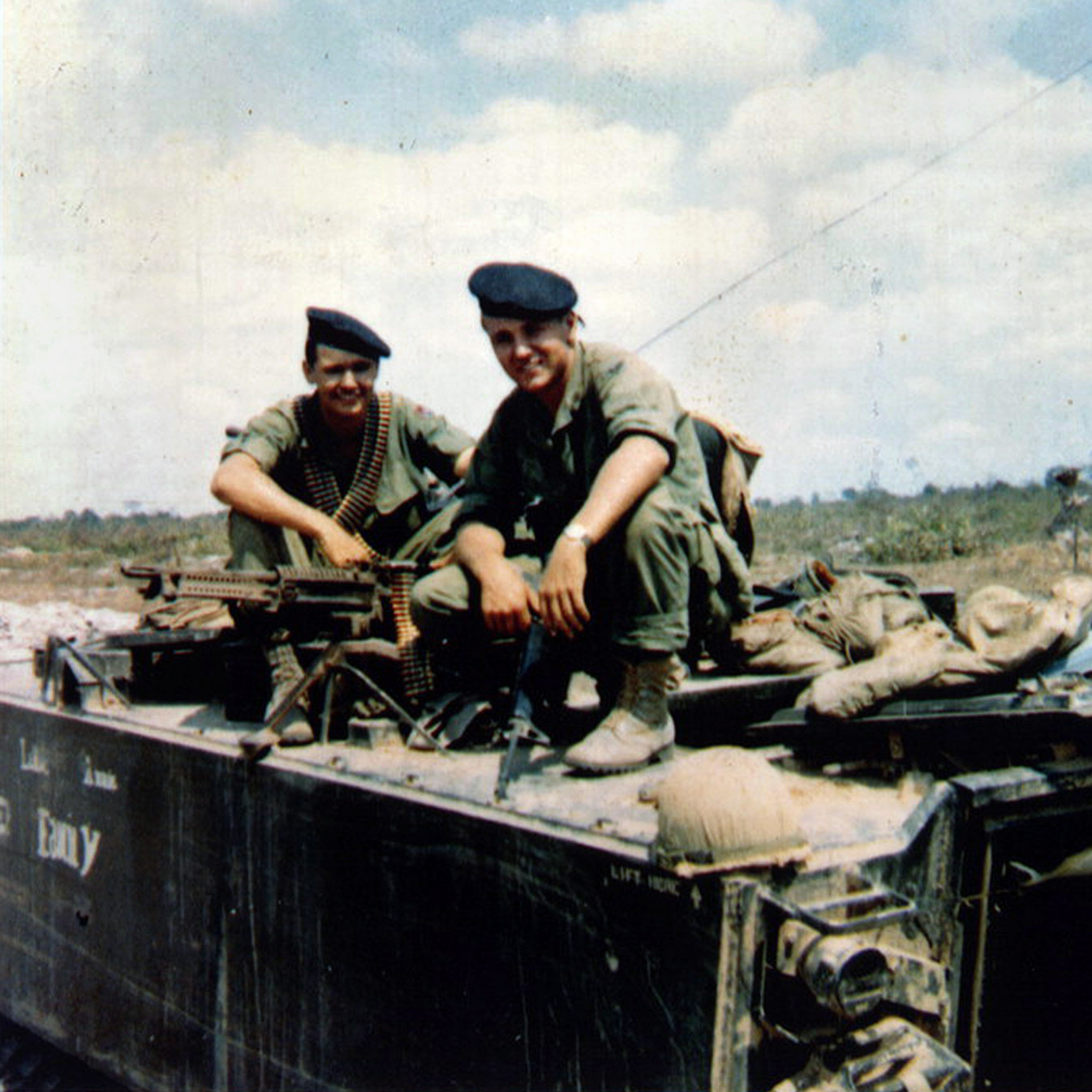 Chuck Hagel (right) and his younger brother Tom sit atop an armored personnel carrier in Vietnam, in a photo taken in or around 1968. The Hagel brothers were squad leaders with the U.S. Army's 9th Infantry Division in the Mekong River Delta.

Photo provided by Library of Congress/AP

Hagel sat down with NPR last May and recalled 1968 in Vietnam.

"That was the year we sent back more than 16,000 young Americans dead. But I think of those special quiet heroes who served, who came back, and never expected anything in return for their service except maybe a little respect," said Hagel.

Hagel came back still a supporter of the Vietnam War, but over time he learned that President Johnson was privately calling the war unwinnable.

"He investigated some of the tapes, Lyndon Johnson tapes, you know, and what had been said and done behind the scenes," says Charlyne Berens, who wrote a biography of Hagel and teaches at the University of Nebraska. "And that really began to make him question the validity of the war and make him much more skeptical if not cynical about the way it was prosecuted."

Hagel brought that skepticism to the Senate and to debates about Iraq and Afghanistan.

The question now is how Hagel's Vietnam experience might shape his advice to the president if he's chosen to lead the Pentagon.

Even the rumor that Hagel might be nominated inspired a campaign to block him. Republicans and supporters of Israel accuse him of being anti-Israel and soft on Iran. Hagel as a senator voted against sanctions on Iran, though now he says sanctions should be ratcheted up. Still, he's not seen as tough enough.

"If you have somebody there who's already made it clear that he does not want to engage in a confrontation with Iran, what kind of negotiating leverage do we have?" asks Eliot Cohen, an adviser to President George W. Bush. "You want to have as secretary of defense somebody who's the heavy. Somebody who's the guy who looks as if he's perfectly capable of waging war against you and happy to do it. That's just kind of elementary negotiating tactics."

Hagel is fighting to keep the possibility of his nomination alive. He apologized last week for opposing an openly gay appointee to be an ambassadorship back in 1998. Gay-rights groups criticized him for that stand.

And Hagel appears willing to see another confrontation over a Pentagon budget he calls bloated. In an interview with the Financial Times last year, Hagel said: "I think the Pentagon needs to be pared down. I don't think that our military has really looked at themselves strategically, critically in a long, long time."

That comment came after $500 billion in Pentagon cuts. In the same interview, Hagel said President Obama should have backed the Simpson-Bowles report that called for deeper federal spending cuts.

"If the president would have done that," Hagel said. "I believe it would have eliminated all the nonsense."

Hagel's biographer, Berens, says "nonsense" is one of Hagel's favorite words. "Something will come along and he'll say, 'That's just nonsense.' "

It's a word many admirals and generals might hear a lot, if former Army Sgt. Chuck Hagel arrives at the Pentagon.