Accessibility links
Kitchen Window: Infuse The Holidays With Spirits Want a little more kick to your cocktail? Rina Rapuano explains how to infuse your liquor with citrus, spices and more. She shares recipes from some serious spirit-makers — for Mandarin Tea Vodka, Pecan-Infused Rye and Pineapple-Habanero Tequila. 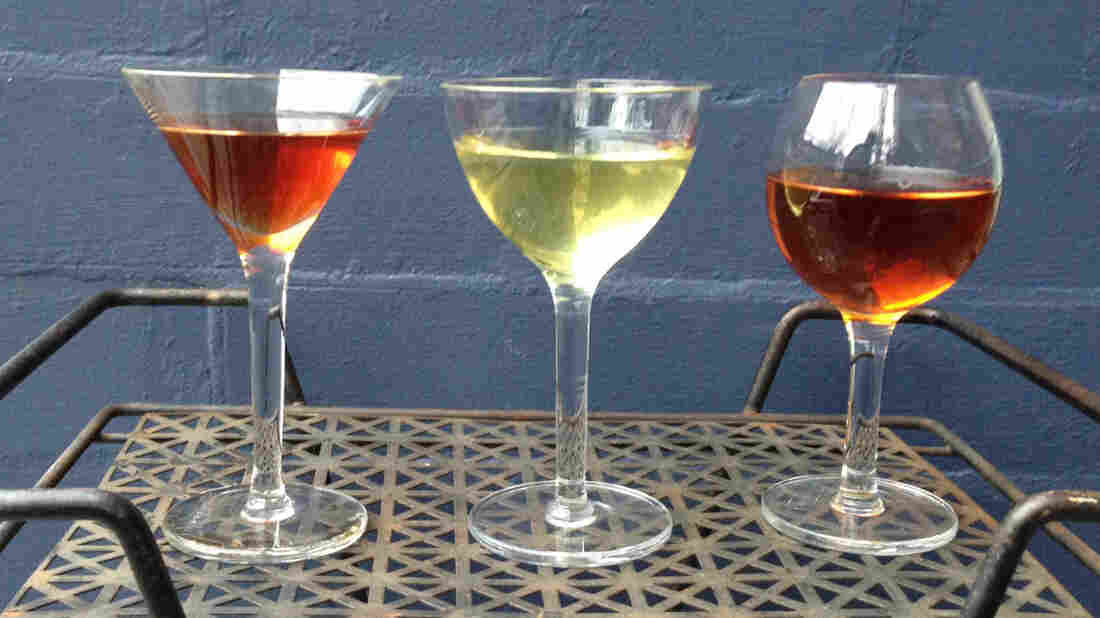 While Melkon Khosrovian was wooing his wife, he quickly realized that she wasn't as enamored with the frequent hard-liquor toasts as his extended Armenian family was. "She would just pick up her glass and put it back down," he recalls. So he decided to experiment with flavor combinations that would be more palatable to her, creating infused liquors such as grapefruit-vanilla or (her favorite) pear-lavender vodka — in hopes that he might help her feel more like part of the family in the process.

That romantic gesture not only helped Khosrovian impress his future bride, it also introduced him to a life-changing hobby: He is now co-founder, CEO and spirits maker of the 8-year-old Greenbar Collective, a California-based company that makes organic, handcrafted spirits, such as bitters, wheat vodka (plain or infused with lemon or vanilla) and rum (plain or spiced), among others.

My own experience with infused liquors was limited until I visited relatives in Italy in 2003, when I had the good fortune to stay with my father's cousin, Sisella Leopardi. My husband and I jokingly called her the Martha Stewart of Italy because she made her own everything: peach jam (from peach trees in the back yard, naturally); pasta; breakfast cookies just like the ones found in Italian shops and limoncello.

Rina Rapuano is a freelance food writer and restaurant reviewer based in Washington, D.C. She writes regularly for The Food Network's CityEats site and Capitol File magazine, and has written extensively for The Washington Post's Food section and Washingtonian magazine. When she's not dragging her husband and two kids to area restaurants, she's usually in the kitchen cooking, baking or sneaking a cookie. Find Rapuano on Twitter at @rinarap.

While I didn't come back with an overwhelming urge to make cookies, jam or pasta, I was intent on making her limoncello. This was my first foray into flavoring my own hooch, and also my first addictive taste of giving a gift that was made and bottled by yours truly.

And while I have continued to dabble with infusions over the years — tossing nubs of peeled ginger into vodka to mix with spicy ginger ale; vodka with handful of raspberries and lemon balm from my garden that worked nicely with club soda or tonic; black tea vodka for a honey-thyme cocktail — I knew relatively little about the subject before talking with Khosrovian.

To get started, he recommends buying a gallon-sized mason jar with a flip-down closure. I tried to be clever (and cheap) and repurpose a 1-gallon cider jug for my mandarin tea vodka infusion, but I soon realized I would have a hard time getting anything out of the jar if something started to taste overpowering.

Khosrovian recommends choosing ingredients that are organic, local and seasonal. "The final thing, which is part of the experimental nature of this project, is to pick a few themes for your infusions before you start," he says. "If you're going to make something for the holidays, spices should be a major theme. If you're going to drink it warm, pear and spices would work great. If you're going to make a cocktail, citrus and spices would be best. Don't just put equal parts of everything ... Just as it gets colder and you layer your clothing, you layer your flavors."

Next comes the easy part: Put everything in a jar, shake twice a day, taste once a day — taking out anything that's taking over the flavor — and strain through two or three layers of coffee filters when you are happy with the flavor, which is usually after about two weeks.

Putting each ingredient in cheesecloth is another piece of sage advice I did not follow, and I regretted it when I felt like the orange flavor was taking over my infusion. But that's OK because Khosrovian also knows what to do when things don't go as planned. "Take everything out, give it a day, come back and taste it and make adjustments or blend it out a bit. If it's too flavorful, add neutral alcohol." He says corn syrup and other sweeteners such as maple syrup, honey and agave are also great ways to mask any flavors that have become too pronounced.

The reason for tasting every day is that my lavender might be stronger than your lavender. "These ingredients are cool and fun to play with, but you have to be very respectful of the power of the flavor of these things," he says. "If you turn your back, they could take your whole work down with them ... or make you look like a superstar."

This recipe, provided by Melkon Khosrovian of Greenbar Collective, employs one of his favorite starter flavors, citrus. Others that he thinks are easy entry points to the hobby are spices such as cinnamon and vanilla and flowers such as lavender and rose petals. This recipe's instructions can be applied to most other infusion recipes. 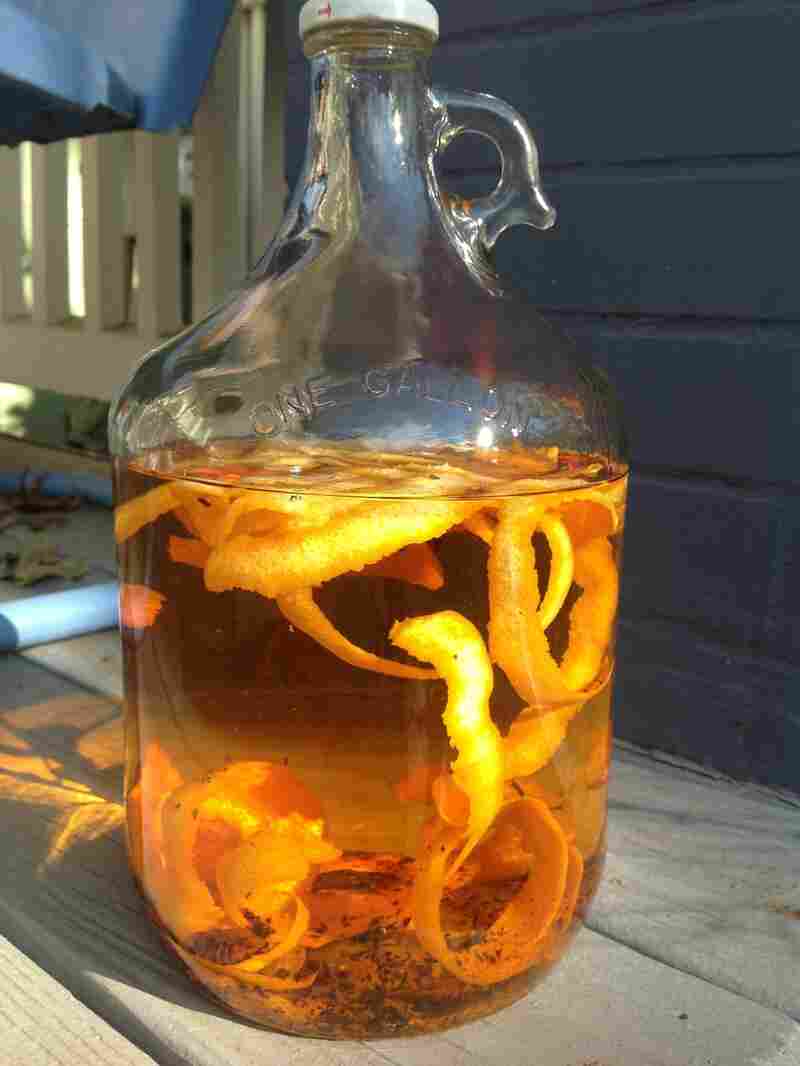 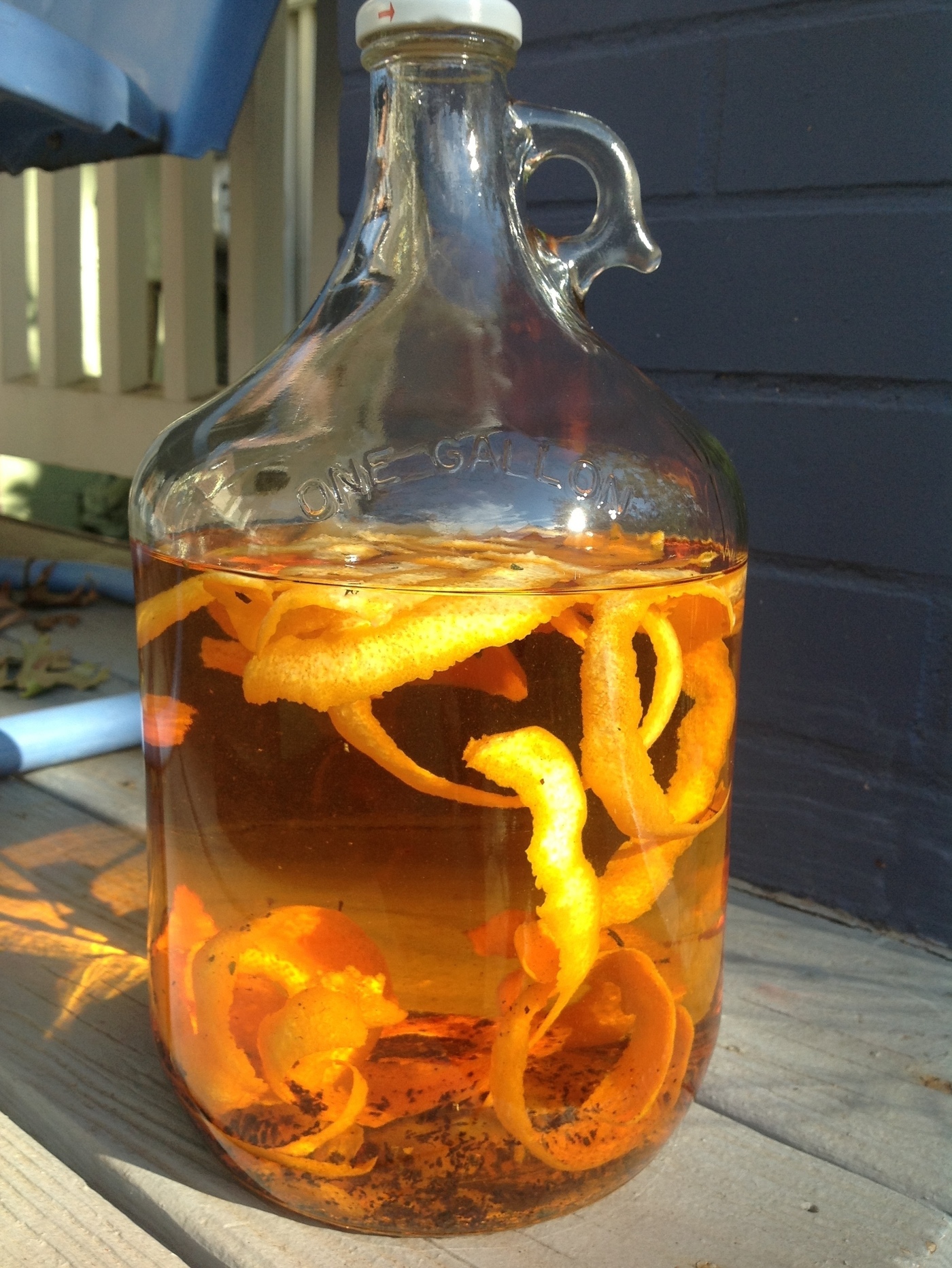 Zest of 4 medium mandarins or other flavorful oranges

Peel the citrus fruits with a potato peeler, being careful to avoid peeling any of the white pith. Combine all in a 1-gallon mason jar with a rubber gasket, keeping the vodka bottles for storing the infusion later. Shake twice daily for 10 to 14 days, tasting daily to make sure the flavors develop properly and in balance — not too bitter (from the mandarin pith or tea) or spicy (from the cloves). If any ingredient is beginning to overwhelm the rest after seven days, remove it.

When the infusion has yielded the desired flavor and all the elements are in balance, strain the contents of the infusion jar into another container — first through a strainer to catch big particles and then through two layers of coffee filters to catch small particles.

Taste again. If a little too bitter or tannic, add 1-4 tablespoons of grade A maple syrup. Shake and leave overnight to incorporate.

On a recent trip to New Orleans, I sampled the enchanting cocktail creations of Windsor Court Hotel mixologist Christine Jeanine Nielsen. She's relaxed in her approach. "I never typically measured too much out," she says of her flavoring agents. "Two cups for a liter of alcohol is pretty standard." She likes to mix fruits and herbs, such as strawberry and basil, or blueberry and rosemary. My autumnal trip brought a taste of the warming pecan rye that she uses in her NOLA-ease cocktail. "And it's good by itself, too," Nielsen says. I can vouch for that.

Pour all ingredients in a tall glass with ice and stir. Serve up in a stemmed glass, like a champagne coupe or a vintage martini glass, garnished with a wide lemon peel. 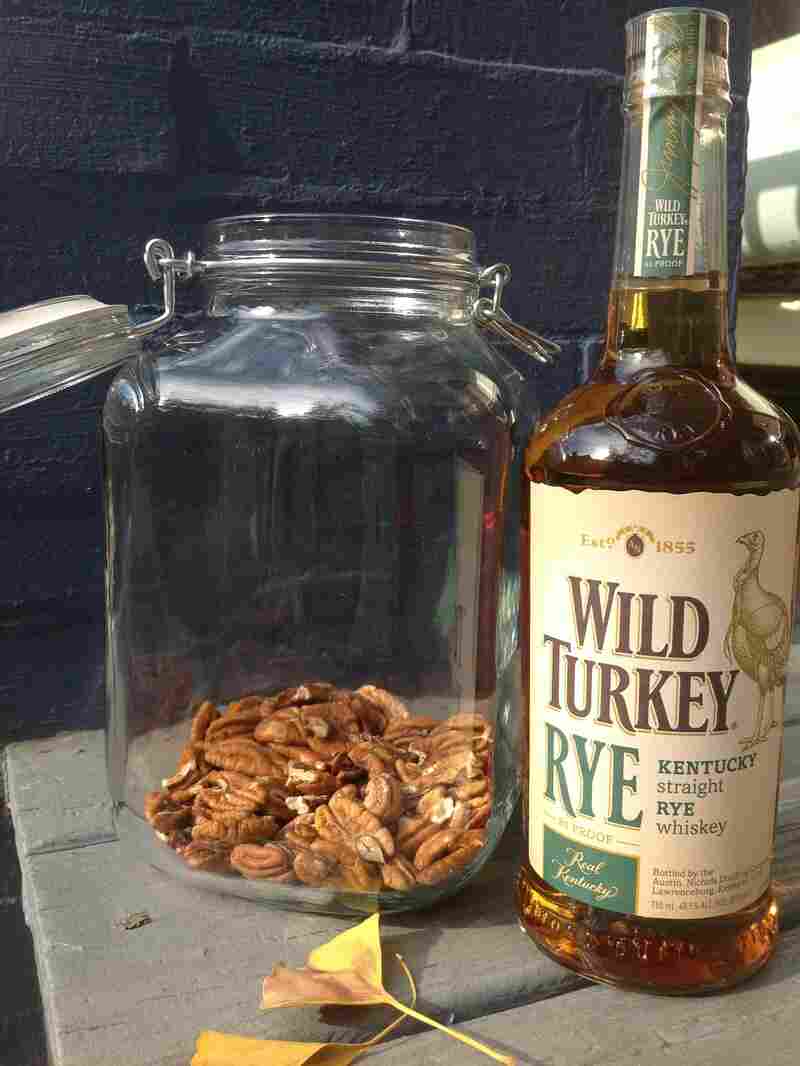 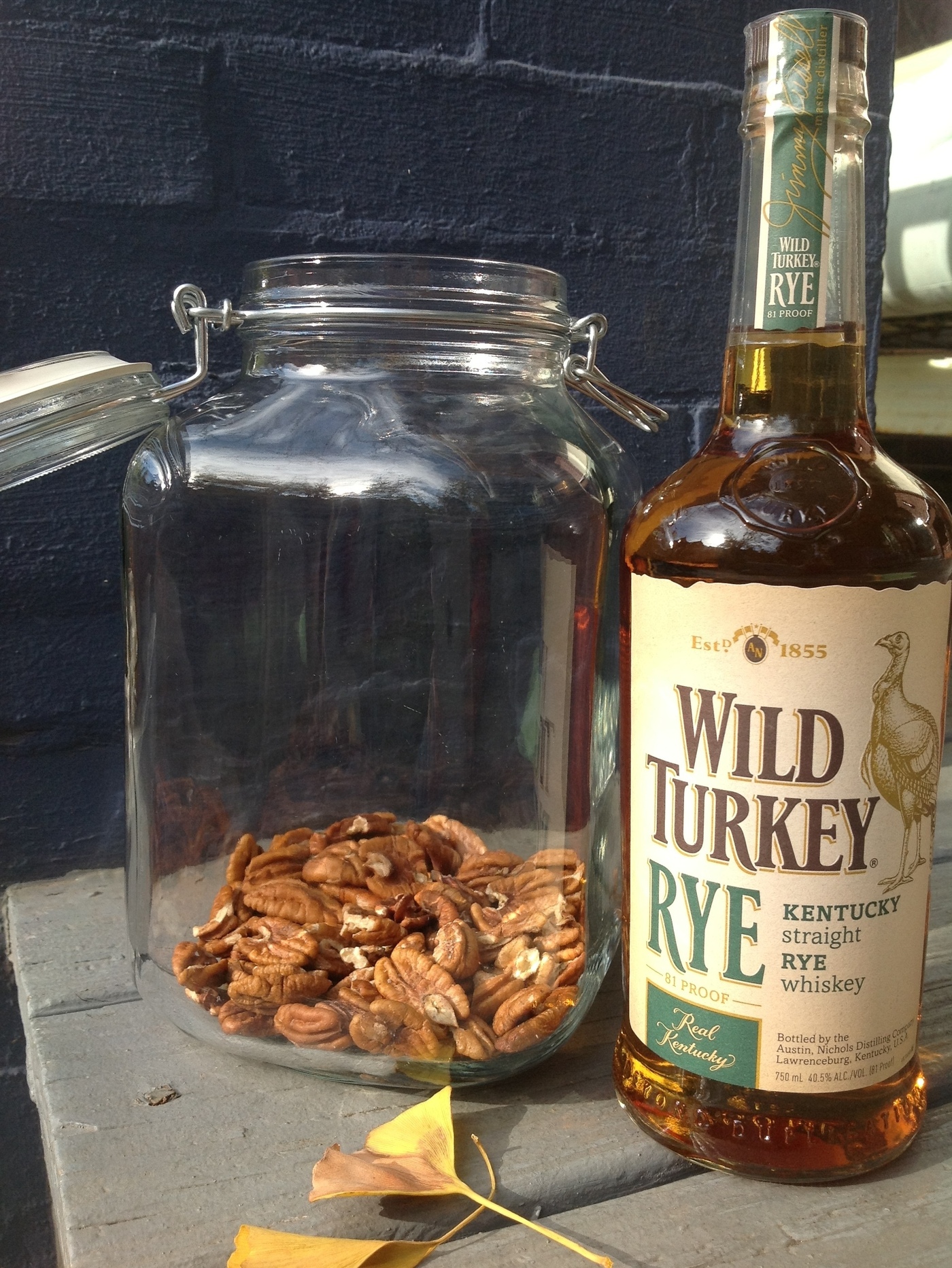 To make the rye, pour whiskey into a mason jar and add pecans. Infuse for 10 days to two weeks, shaking and tasting it daily to test for bitterness. When the rye has mellowed and the pecan flavor is strong but not bitter, strain through cheesecloth or coffee filters four or five times. Store at room temperature.

And because I hate discarding any food, I asked the Windsor Court's chef Kristin Butterworth what she does with the rye-soaked pecans supplied by Nielsen: "I coat the pecans in granulated sugar and cook them over low heat until they are caramelized and candied. I cook them down in some water with apples and honey and then make a pecan and apple puree that goes amazingly well with some spiced venison. I use them to infuse that amazing flavor into sauces. The possibilities are endless, and it's so awesome that we get to completely use product start to finish with minimal waste."

We hear a lot about infused vodka or even grain alcohol, perhaps because they are so neutral. But infused tequilas and rums are gaining in popularity. This is a sweet-spicy infusion supplied by Dusty Frierson, the beverage director and general manager of Mahogany Bar at the Purple Parrot Café in Hattiesburg, Miss. He also makes a foie gras-infused Grand Marnier and a Douglas fir-infused gin — but I'll save those for when I'm feeling a bit more advanced (and adventurous). 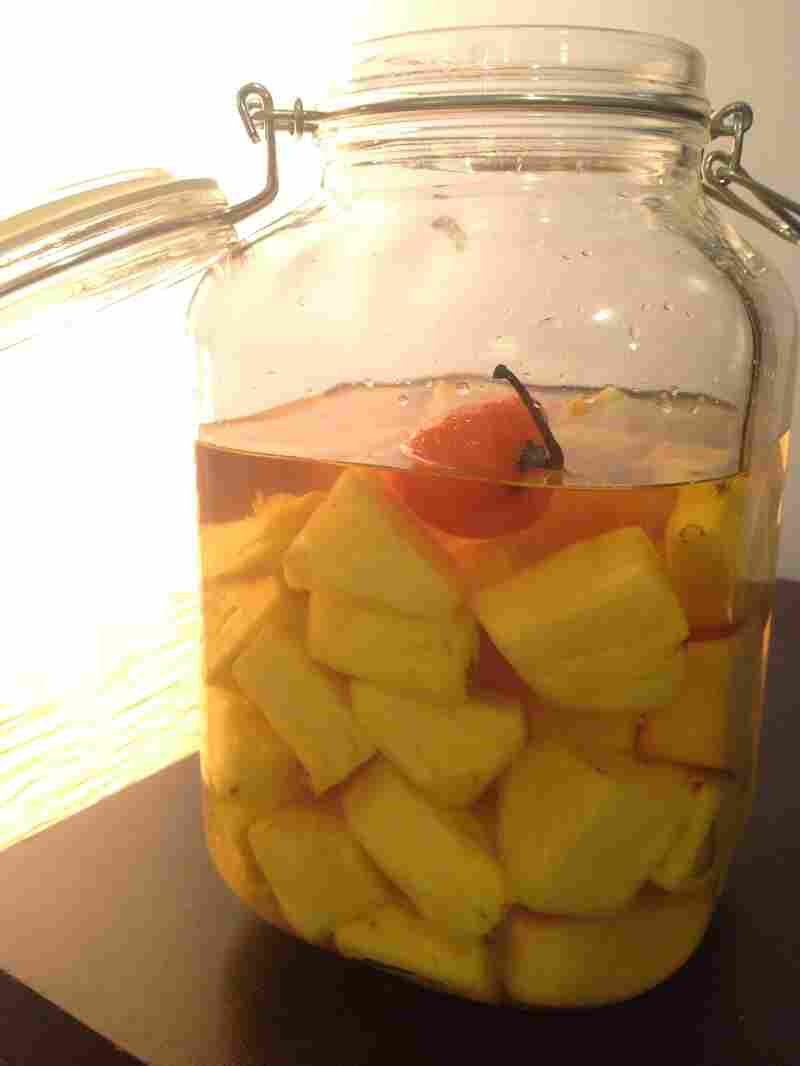 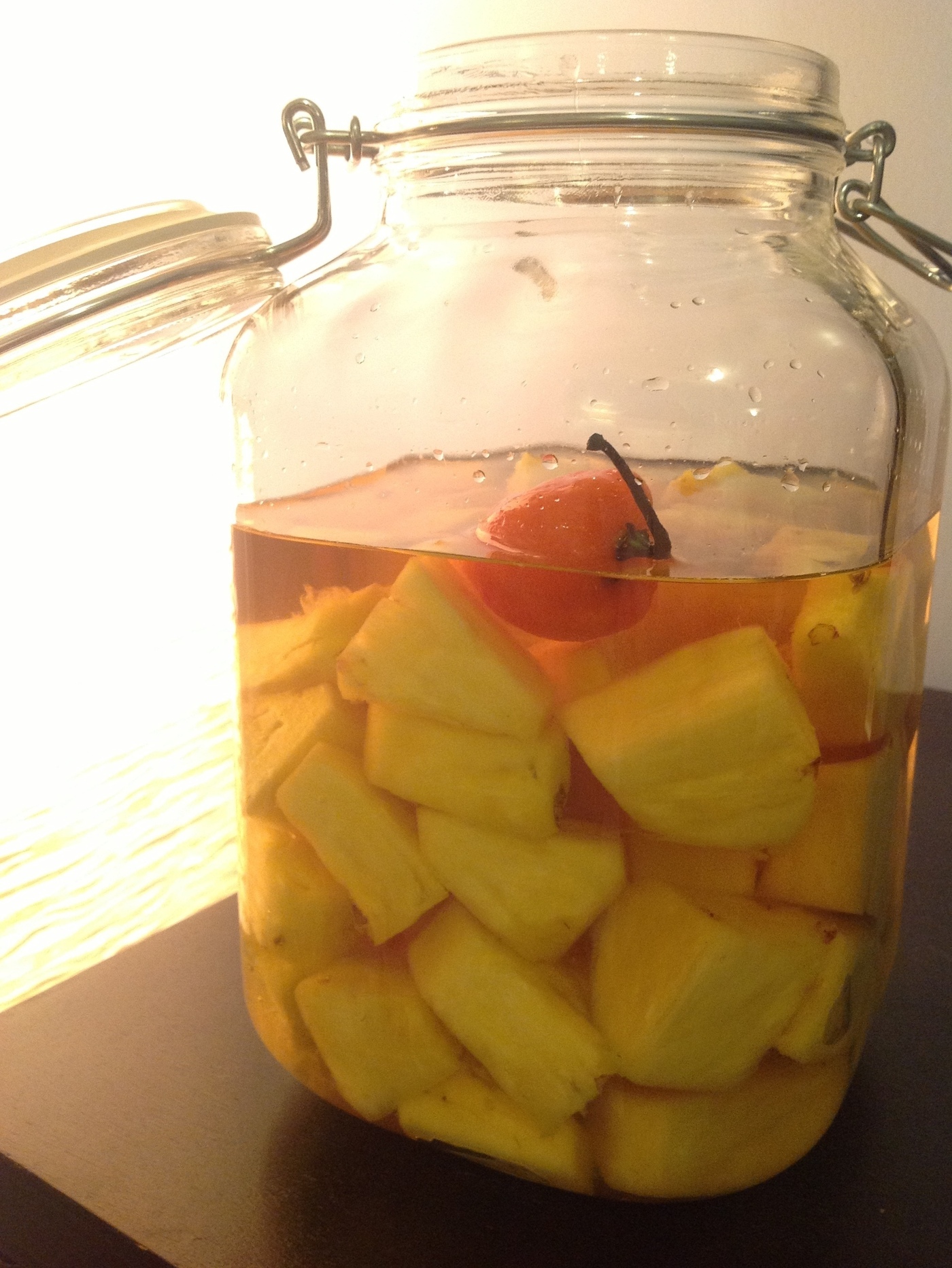 Put all ingredients in a mason jar for three days at room temperature, stirring or shaking twice a day. If you want more spice, remove the pineapple and keep the habanero pepper in the tequila for a few more days until you have the desired level of heat. Strain mixture at least twice. (The more thorough the straining, the longer it will keep.) Keep refrigerated for up to three weeks. Mix with orange juice and a splash of soda for an eye-opener, as a margarita mixer or use in Frierson's El Corazón cocktail (recipe below).

This is the recipe of my cousin Nenetta Amoni (Sisella's sister). I adapted it from the cookbook A Mangia: A Southern Italian Cookbook, written by Nenetta's daughter and son-in-law, Marilena Amoni and Don Ryan. Sisella has died since my husband and I took our dream trip to Italy, but I think of her when I drink a glass of this quintessential Italian liquor — and feel that much closer to my faraway family. 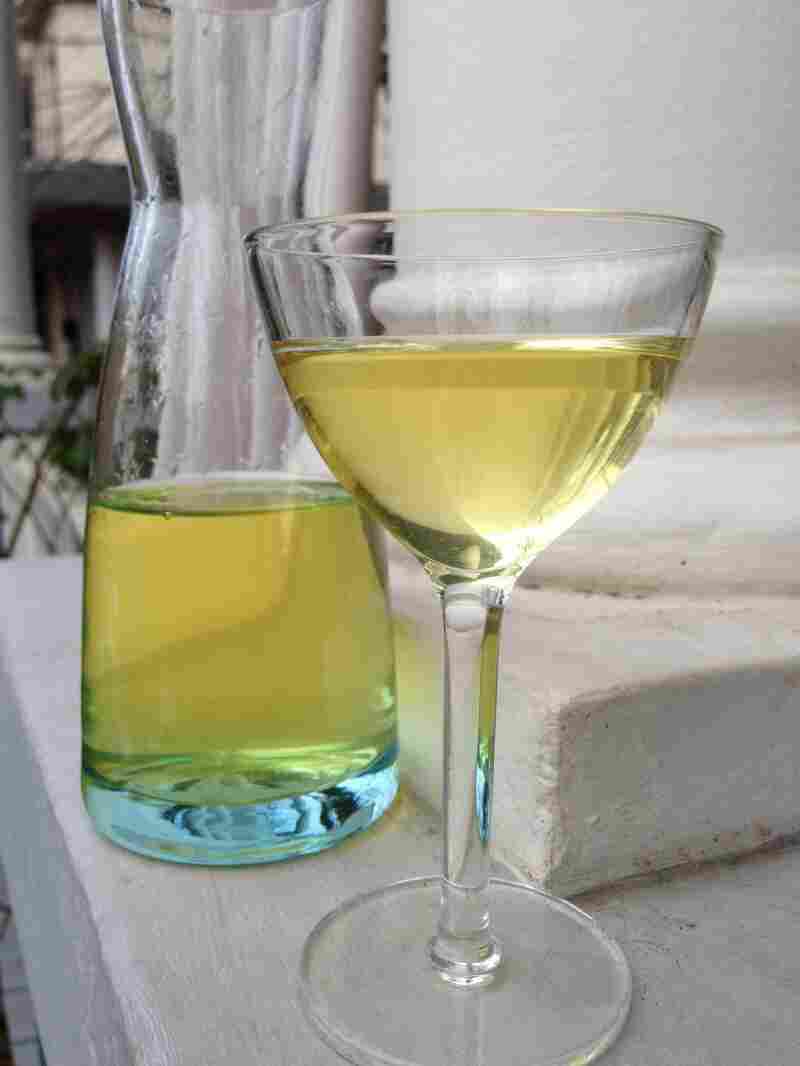 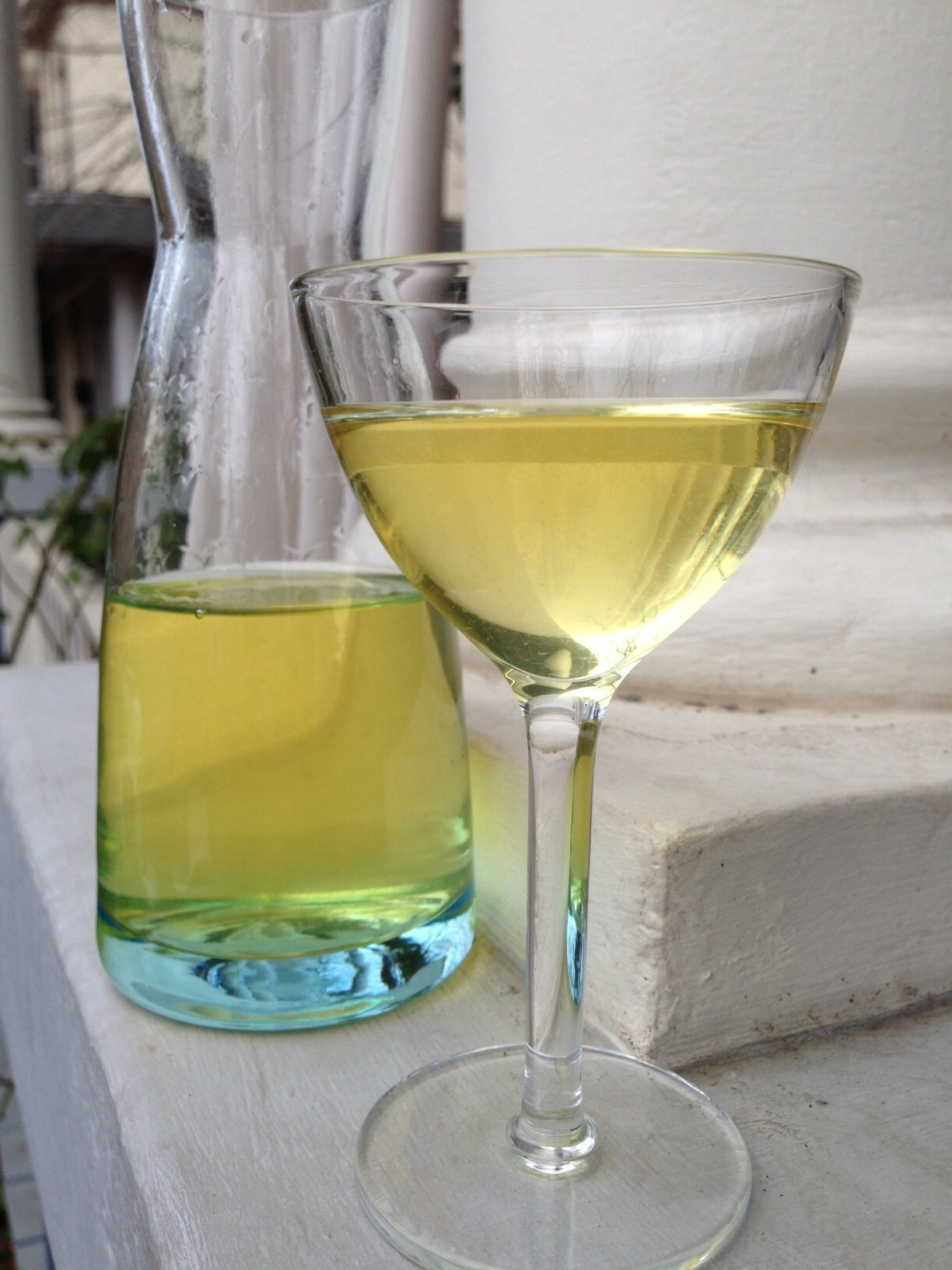 Wash and zest lemons with a vegetable peeler, being careful to leave the white pith on the lemon. Put the peels and alcohol in a large container (preferably glass.) Leave in a cool, dark place for at least 20 days.

In a medium saucepan, combine sugar and water and cook over medium heat until sugar dissolves and mixture has the consistency of maple syrup. Let cool.

Strain the lemon-alcohol mixture through a coffee filter or cheesecloth. Add syrup, mix well, bottle and cork. Store in a cool, dark place for at least 20 more days, moving the limoncello to the freezer when ready to drink.