Accessibility links
Finding New Meaning In The Loss Of A Son Maya Thompson's son Ronan died of cancer three days before his fourth birthday. During his illness, she began a raw and sometimes angry blog that drew millions of readers. Thompson has since started a foundation and is funding clinical trials to find a cure for childhood cancer. 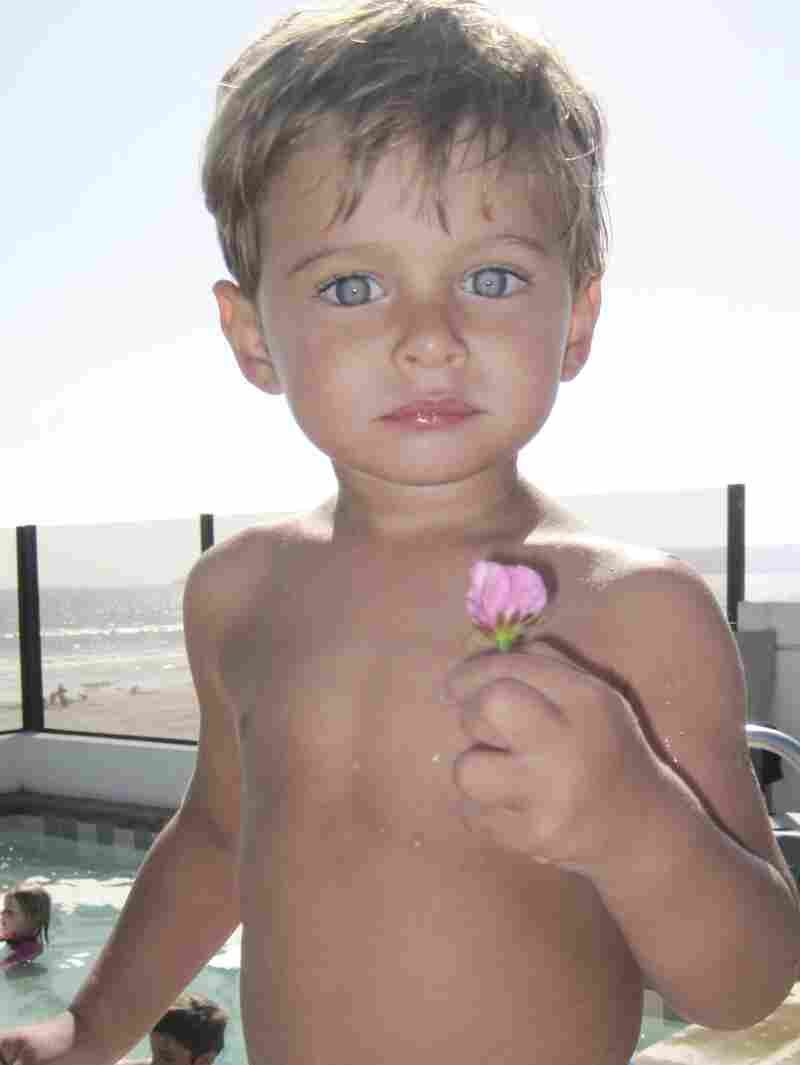 Ronan at 2 years old. "I know Ronan's purpose in life was to shed light on this disease," says his mother, Maya Thompson. "This is why I will continue to fight for childhood cancer for the rest of my life." Courtesy of Maya Thompson hide caption 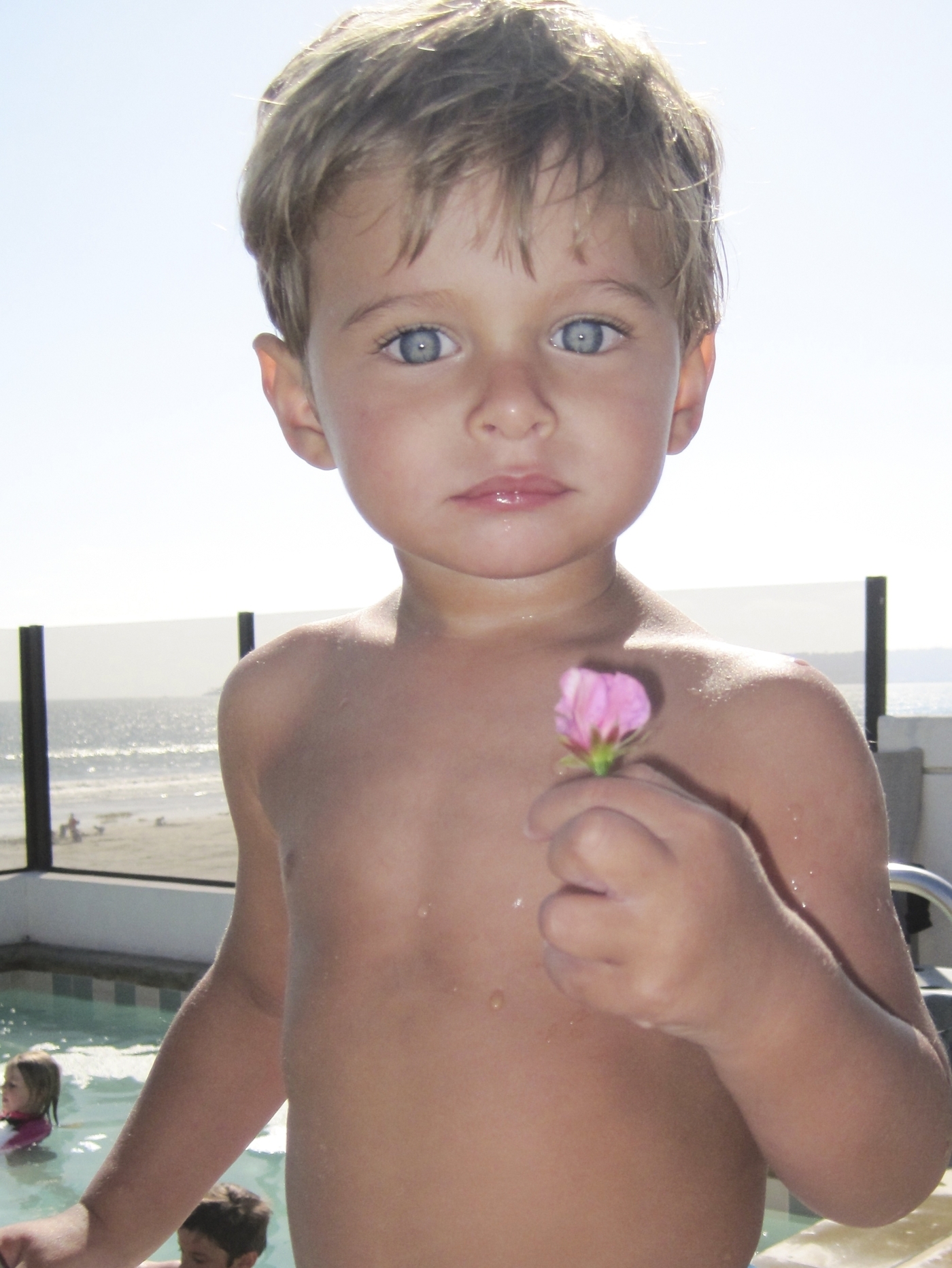 Ronan at 2 years old. "I know Ronan's purpose in life was to shed light on this disease," says his mother, Maya Thompson. "This is why I will continue to fight for childhood cancer for the rest of my life."

This is a story about loss and meaning. It's the story of a boy who died and a mother who tottered at the precipice of despair. It's about faith — not in God, but in the ability to build from ashes.

The story begins in a Phoenix office building. Here, at the weekly MISS Foundation group for grieving parents, about a dozen people, mostly women, are telling their stories. One mother's son was murdered. Another's daughter died a month after she was born. A baby was born premature; a 15-year-old boy died in a skateboarding accident.

As the stories unfold, Maya Thompson is on the verge of tears. She's pregnant and all this talk of death rattles her. She's seen a child's death up close. Her son Ronan died of cancer in May 2011, just three days before his fourth birthday.

"I called him my spicy little monkey, because, out of all of my three kids, he was very strong-willed and a little rebel," Maya recalls the next day in her Phoenix home. "He was my little sidekick. I think from the time he was born, we weren't really ever separated."

She flips through a photo album, chronicling the brief life and decline of her son, a sturdy blond boy with eyes so brilliantly blue that you did a double-take. Ronan was her third son, and the most robust. He rarely had a sniffle.

She points to a striking snapshot. "This was about two weeks before he was diagnosed. He looks perfectly happy and healthy," she says in wonder. "He was fine, right? But he wasn't."

The cancer spread invisibly, until one day Maya noticed that Ronan's left eyelid was drooping. At first, the doctors thought it was an infection or a stye, but eventually they realized the boy had stage 4 neuroblastoma, a cancer of the nervous system.

A Personal Blog Becomes Something More

Maya began blogging right after Ronan was diagnosed. Her first post, dated Aug. 13, 2010, is called "The Journey Begins." It is hopeful:

"Neuroblastoma is very treatable and even curable. We have our plan in place and the Thompson family combat boots are on." 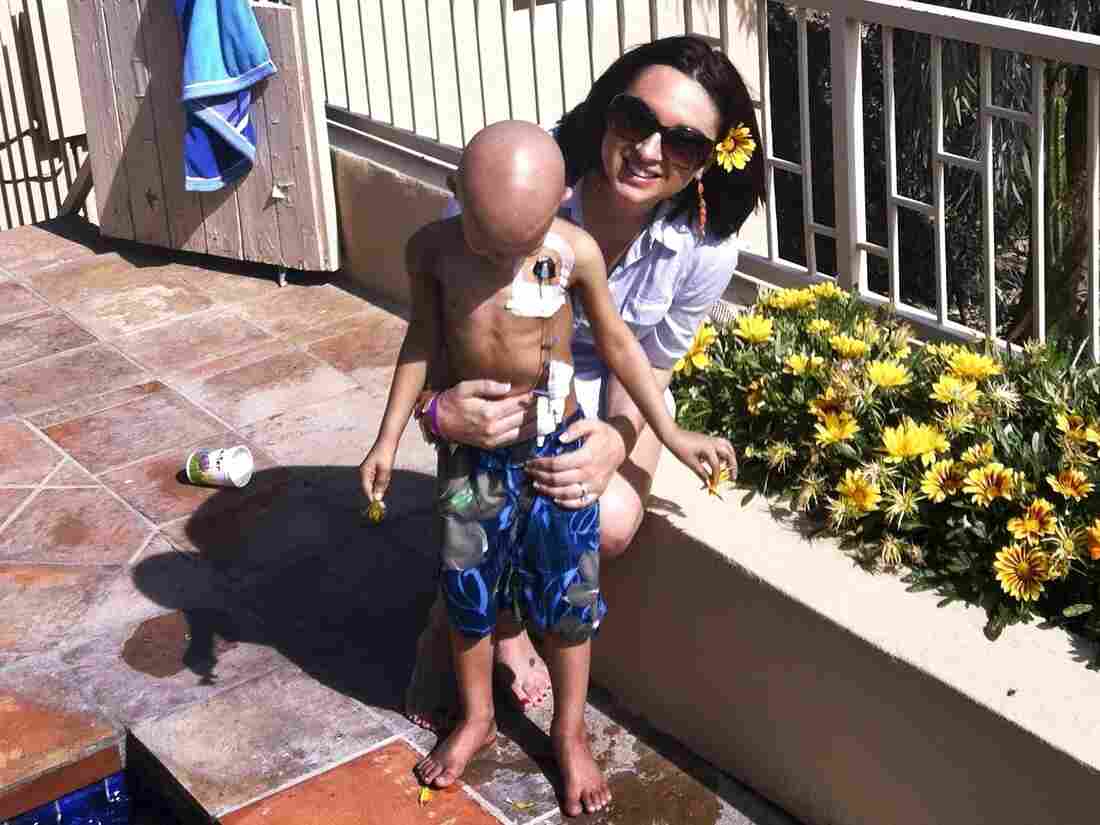 Maya Thompson with Ronan just a few weeks before his death in May 2011. A broviac on his chest administered chemotherapy, platelets and red blood cells when needed. He wanted to play in the hot tub that day, so Maya let him go in up to his midsection to keep the broviac dry. Courtesy of Maya Thompson hide caption 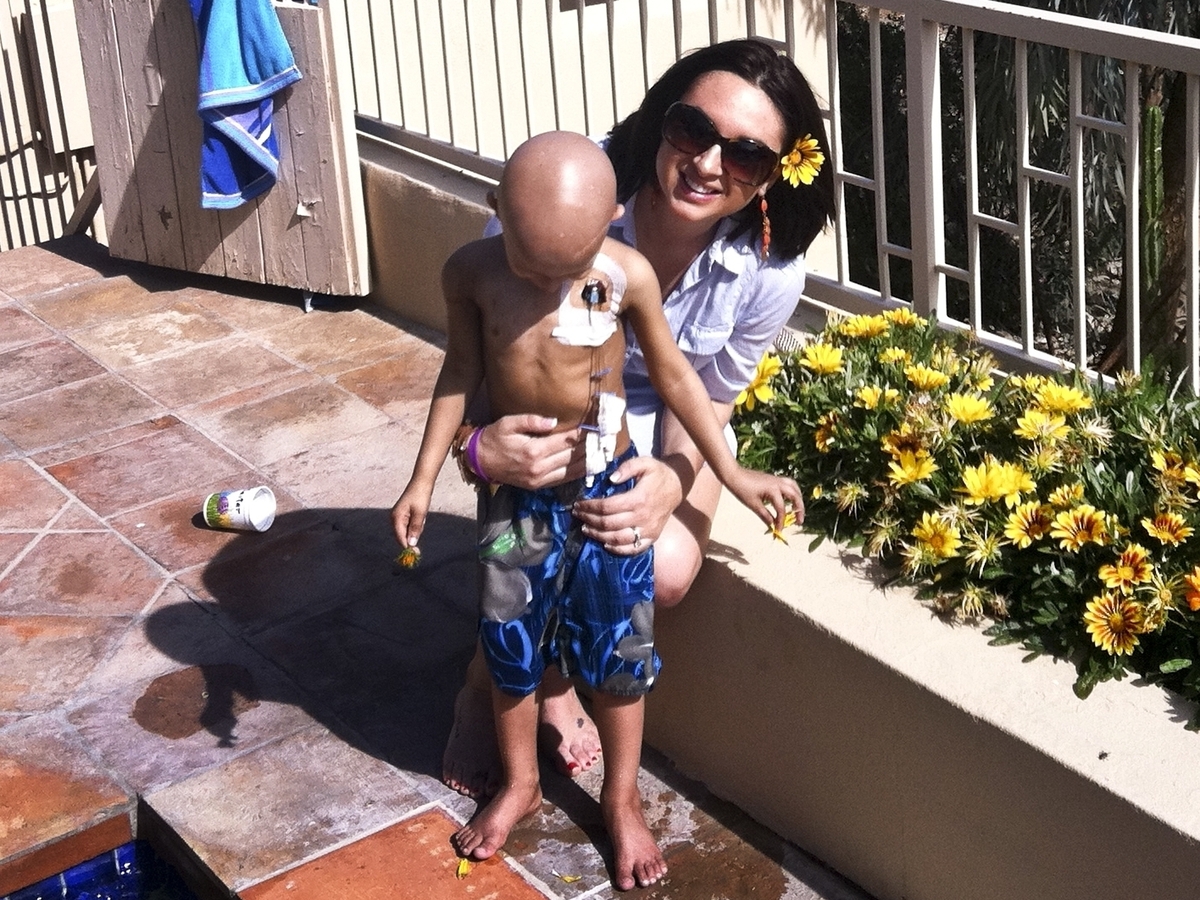 Maya Thompson with Ronan just a few weeks before his death in May 2011. A broviac on his chest administered chemotherapy, platelets and red blood cells when needed. He wanted to play in the hot tub that day, so Maya let him go in up to his midsection to keep the broviac dry.

Initially, Maya and her husband, Woody, were optimistic, even though 70 percent of children with stage 4 neuroblastoma die.

"As we marched through it, the cancer kept dissipating and he was tolerating the treatments very well," Woody says. "And so we were, we were very optimistic. Just looking at him and his spirit, we really did think, 'Yes, maybe the odds are against us, but we feel like if anybody's going to go up against these odds, it's going to be him.' "

They were "very naive" at the time, Maya says. "I will never be naive again. I mean, I just had an ultrasound yesterday where I made the technician check for a mass in my unborn baby's stomach." (The cancer can start in a fetus's stomach, Maya explains.)

When Someone You Know Loses A Child

Over the next eight months, Maya continued blogging. At first, she did it for family and friends, but soon the blog began drawing millions of readers. Maya's writing was raw, lurching from giddy hope to anguish to blazing anger.

Here's what she wrote a week before Ronan died:

"Everything happens for a reason." BULL**** ... "God has a greater plan for Ronan." BULL****. "Ronan wants to go home, where he belongs, to Heaven" ... Who the **** came up with these sayings because the next person I hear say them to me is going to get punched in the face."

"I went through a very long period of not caring about myself or anybody around me," she says. "But to come out of that, I almost feel like I've been reborn again. And you either let this pain kill you or you let it make you stronger. I mean, it's a choice."

Taylor Swift performed "Ronan," based on Maya Thompson's blog, at the Stand Up To Cancer benefit concert in September 2012.

She set up the Ronan Thompson Foundation to try to develop a cure for neuroblastoma and blogged almost daily about her pain and her plans for the organization.

A few months after Ronan's death, Maya was given tickets to a Taylor Swift concert and a chance to meet the young star before the show. Maya assumed a friend had set it all up.

She was standing in the green room, her back to the door, she recalls. "And I heard this girl come walking in saying 'Maya! Maya, Maya, Maya!'

"And I turned around and it was Taylor," Maya continues. "I had no idea that she even knew who I was or who Ronan was. But she'd been reading my blog for a really long time, and her parents had been reading it as well, and they were just heartbroken over our story."

The two women talked and Swift left to perform. A year went by, and then, one day in September of this year, Maya's phone rang.

It was Taylor Swift. She said she had written a song about Ronan.

"She had used a lot of the words off my blog, so she asked if she could make me co-author," Maya says.

Taylor performed the song, "Ronan," at the Stand Up To Cancer benefit concert in September, nearly breaking down at one point. The song has sold more than 500,000 copies on iTunes, and Swift is donating her half to cancer research.

Maya is putting her share of the proceeds — about $250,000 — into the Ronan Thompson Foundation.

And donations also poured in, many from Swift's fans, who call themselves Swifties. 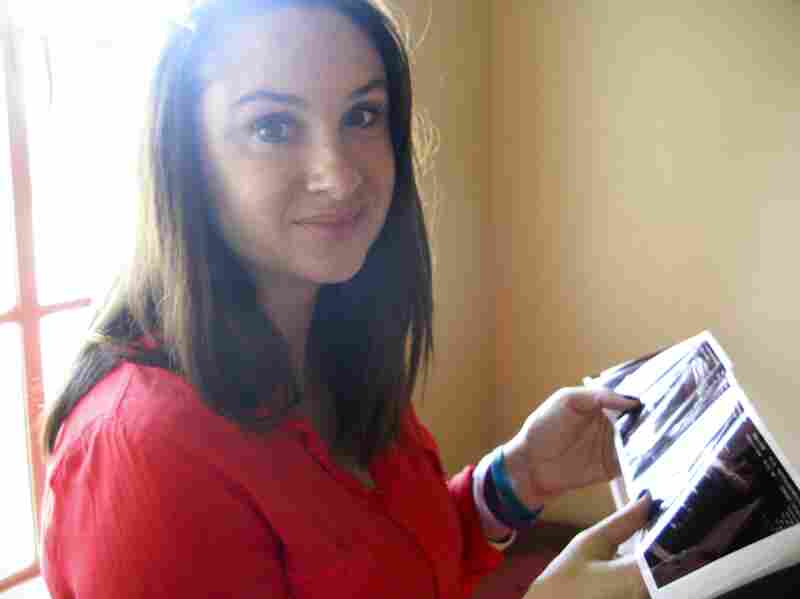 Maya Thompson holds a sonogram of her unborn daughter. After a period of hopelessness after her son's death, Thompson says you "either let this pain kill you or you let it make you stronger." Barbara Bradley Hagerty/NPR hide caption 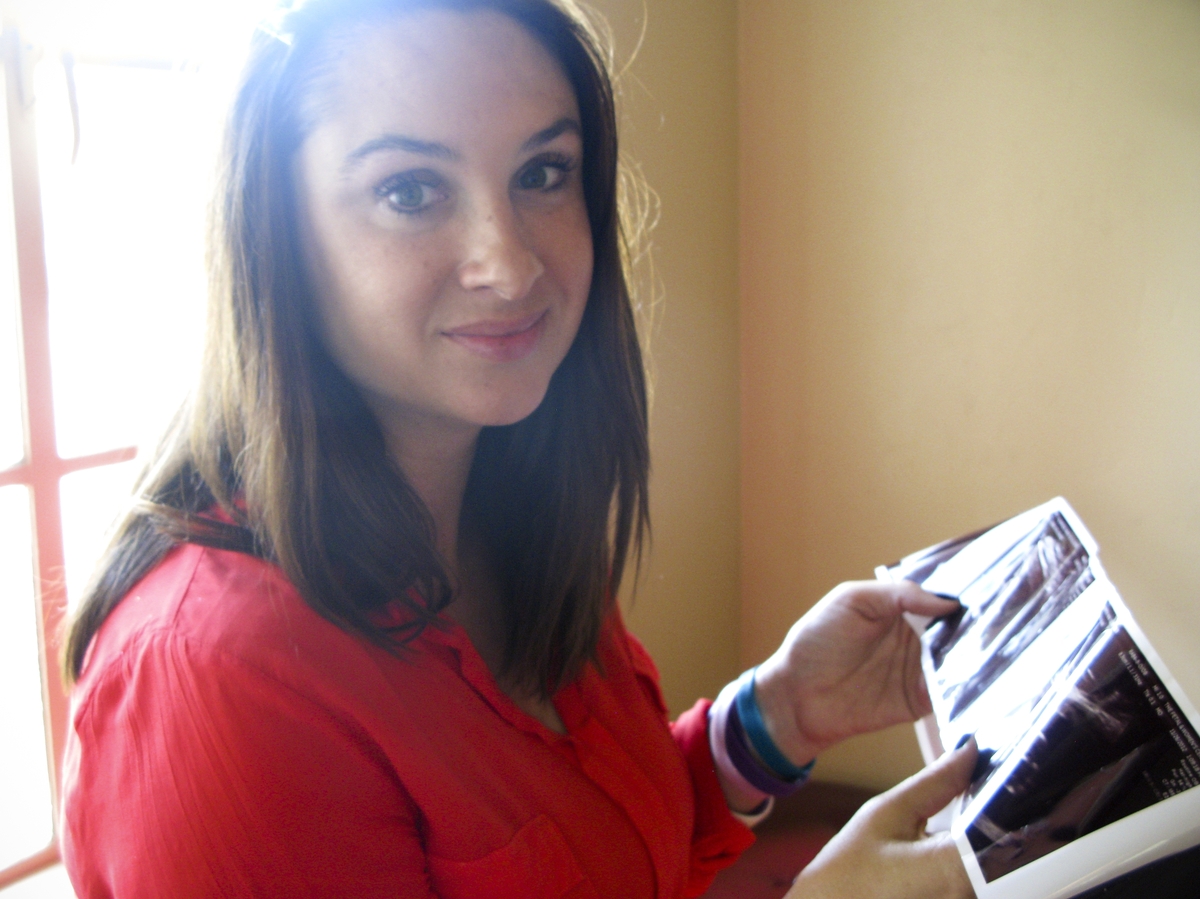 Maya Thompson holds a sonogram of her unborn daughter. After a period of hopelessness after her son's death, Thompson says you "either let this pain kill you or you let it make you stronger."

"I've got these little girls writing me, saying, 'You know, I have $5, it's yours.' Or, 'I want to be a pediatric oncologist now. You've changed my life,' " Maya says. "I mean, all these little tween girls that my son is helping [to] see what's really important in life."

With the money, Maya hopes to fund clinical trials and build a world-class neuroblastoma research center. It's an admittedly ambitious plan, but "I would never bet against my wife," Woody says.

These days, Maya spends a lot of her time on the cancer floor at Phoenix Children's Hospital. She says it's the only place she feels at peace.

"The world that I used to belong in and exist in will never exist for me again," she says. "So this new life is completely different, and I find it extremely beautiful and heartwarming and inspiring and hopeful, in a way."

She says trying to defeat the cancer that stole Ronan is now her life's work.

The enemy has been engaged. The Ronan Thompson Foundation has raised $500,000 and has just funded its first clinical trial at The Children's Hospital of Philadelphia.

It's a victory — but one that Maya would instantly trade to have another day with her son.