Accessibility links
Literary Iceland Revels In Its Annual 'Christmas Book Flood' Icelanders are voracious readers. Books have been the Christmas gift of choice in this small nation for decades. The annual "Book Flood" tradition begins with a publisher's catalog in every mailbox. 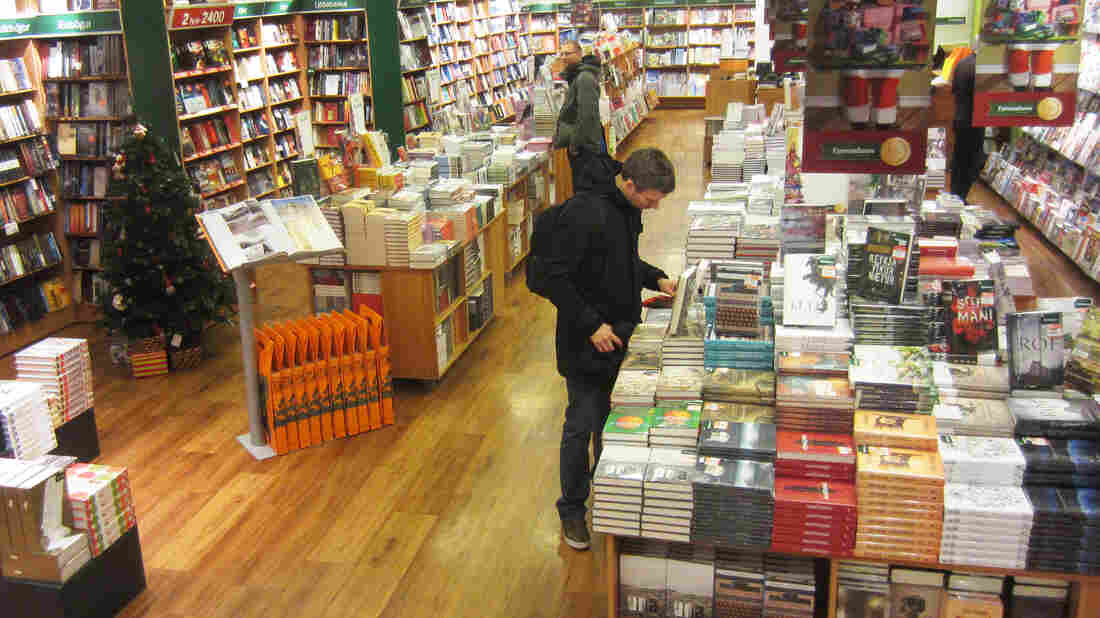 A shopper browses in a branch of the Icelandic book chain Penninn-Eymundsson. Courtesy of BryndÃ­s Loftsdottir hide caption 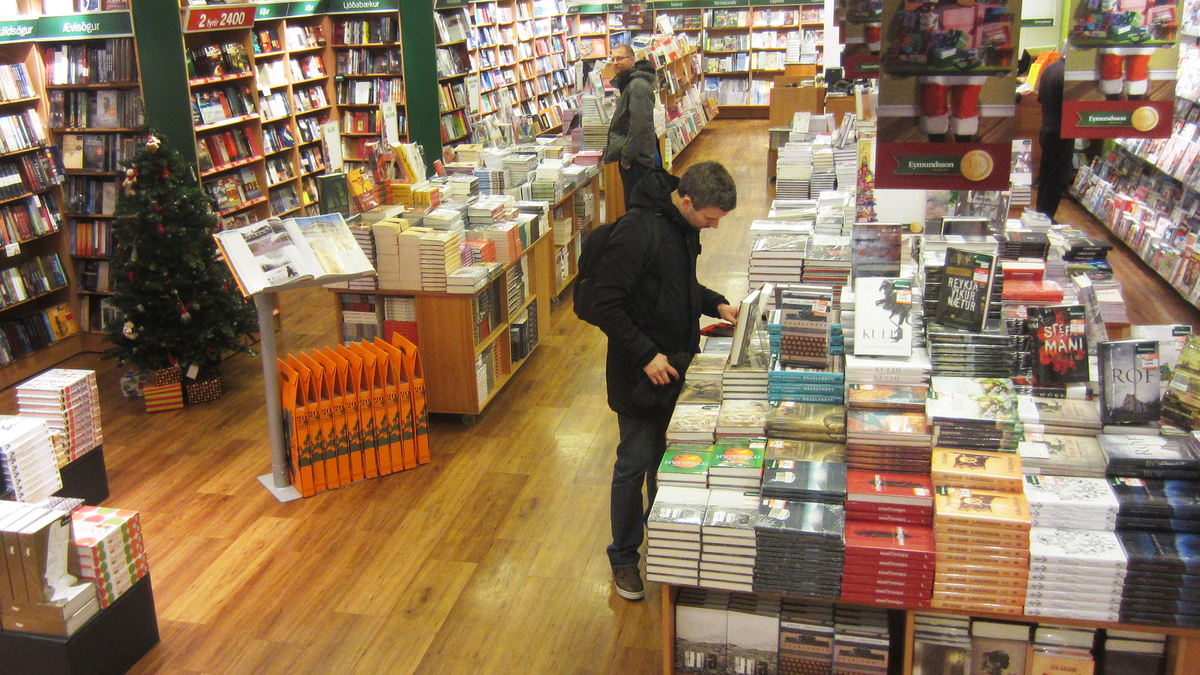 A shopper browses in a branch of the Icelandic book chain Penninn-Eymundsson.

In the United States, popular holiday gifts come and go from year to year. But in Iceland, the best Christmas gift is a book — and it has been that way for decades.

Iceland publishes more books per capita than any other country in the world, with five titles published for every 1,000 Icelanders. But what's really unusual is the timing: Historically, a majority of books in Iceland are sold from late September to early November. It's a national tradition, and it has a name: Jolabokaflod, or the "Christmas Book Flood."

"The culture of giving books as presents is very deeply rooted in how families perceive Christmas as a holiday," says Kristjan B. Jonasson, president of the Iceland Publishers Association. "Normally, we give the presents on the night of the 24th and people spend the night reading. In many ways, it's the backbone of the publishing sector here in Iceland."

Iceland has a long literary history dating to medieval times. Landmarks of world literature, including the Sagas of the Icelanders and the Poetic Edda, are still widely read and translated there, according to the United Nations Educational, Scientific, and Cultural Organization.

Today, Icelandic isn't spoken by many more people than the roughly 319,000 who live in the small country. But in 2009, book loans at the Reykjavík City Library totaled 1.2 million — in a city of only 200,000 people. There's a popular TV show in Iceland, Kiljan, which is devoted entirely to books. And in 2011, Reykjavík was designated a UNESCO City of Literature.

So Icelanders love books. And that love involves most of the population, according to Baldur Bjarnason, a researcher who has written on the Icelandic book industry.

"If you look at book sales distribution in the U.K. and the States, most book sales actually come from a minority of people. Very few people buy lots of books. Everybody else buys one book a year if you're lucky," Bjarnason says. "It's much more widespread in Iceland. Most people buy several books a year."

The book in Iceland is such an enormous gift, you give a physical book. You don't give e-books here."

What kind of books, exactly?

"Generally fiction and biographies would be the mainstays, although it varies a lot," Bjarnason says. "Two years ago one of the surprise best-sellers was a pictorial overview of the history of tractors in Iceland."

That book, And Then Came Ferguson, wasn't the only unusual breakout success. Another, Summerland: The Deceased Describe Their Death And Reunions In The Afterlife, came out last year. The book, by Gudmundur Kristinsson, an author in his 80s who believes he can talk to the dead, sold out completely before Christmas 2010 — and sold out yet again after being reprinted in February 2011.

And Summerland was self-published — a fairly common phenomenon in Iceland, according to Jonasson. "There is some kind of a myth that people like to tell here, that every Icelander dreams about writing a book," Jonasson says. "And sort of 50 percent of those who dream of it actually do it. Before they die they try one way or another to write a book."

A Book Catalog In Every Mailbox

The Book Flood tradition, according to The Reykjavik Grapevine's Hildur Knutsdottir, dates to World War II, when strict currency restrictions limited the amount of imported giftware in Iceland.

"The restrictions on imported paper were more lenient than on other products, so the book emerged as the Christmas present of choice. And Icelanders have honored the tradition ever since," Knutsdottir writes.

The Flood begins with the release of Bokatidindi, a catalog of new publications from the Iceland Publishers Association distributed free to every Icelandic home.

"It's like the firing of the guns at the opening of the race," Bjarnason says. "It's not like this is a catalog that gets put in everybody's mailbox and everybody ignores it. Books get attention here."

Iceland is Europe's most sparsely populated country, with just more than 3 inhabitants per square kilometer. So while there's a high level of engagement, the Icelandic book market is still one of the smallest in the world.

This year's Bokatidindi, for instance, includes a record number of new titles — 842. For comparison, nearly 350,000 new titles were published in the U.S. in 2011, according to Bowker, which tracks the publishing industry.

Three Books To Rescue Nordic Lit From The Dark Side

Bryndís Loftsdottir, project manager for Icelandic books at the book chain Penninn-Eymundsson, says that until about 15 years ago, paperbacks were rare because Icelanders didn't see books as something to be read and bought cheaply.

The success of translated Scandinavian crime fiction has made paperbacks more common today, Loftsdottir says. But the industry and Icelanders have been slow to move to e-books. Part of the reason is a consequence of dealing with a language that's not widely spoken. But it's also cultural.

"The book in Iceland is such an enormous gift, you give a physical book. You don't give e-books here," Loftsdottir says.

Slowly Shifting Sales To Other Seasons

But some things do seem to be changing in Iceland's book world. Jonasson says putting all of one's products in a single shopping season is financially risky. For that reason, he says, more publishers have begun releasing some of their titles during the spring and summer.

Still, Bjarnason says, the power of the Book Flood remains.

"It's still very difficult to release a popular fiction title outside the Christmas season, unless it has its own kind of cachet, like the Harry Potter books and the Twilight books," Bjarnason says.

Bjarnason said publishers released the translations of those books as soon as they were available because they knew they could sell them instantly, any time of the year.

Some things about books, it seems, are simply universal.