Accessibility links
No Sugar Plums Here: The Dark, Romantic Roots Of 'The Nutcracker' Few people today remember E.T.A. Hoffmann, but most everyone is familiar with his most famous creation: The Nutcracker. NPR's Robert Siegel traces the history of everyone's favorite Christmas ballet all the way back to its much darker original version. 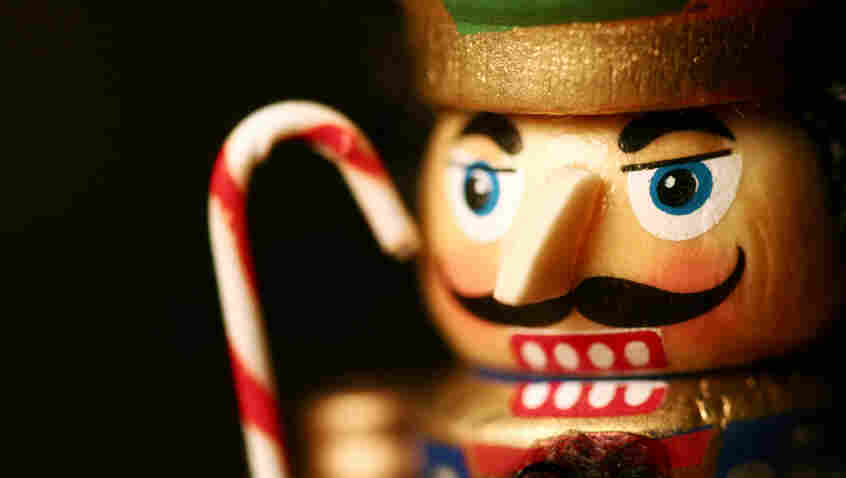 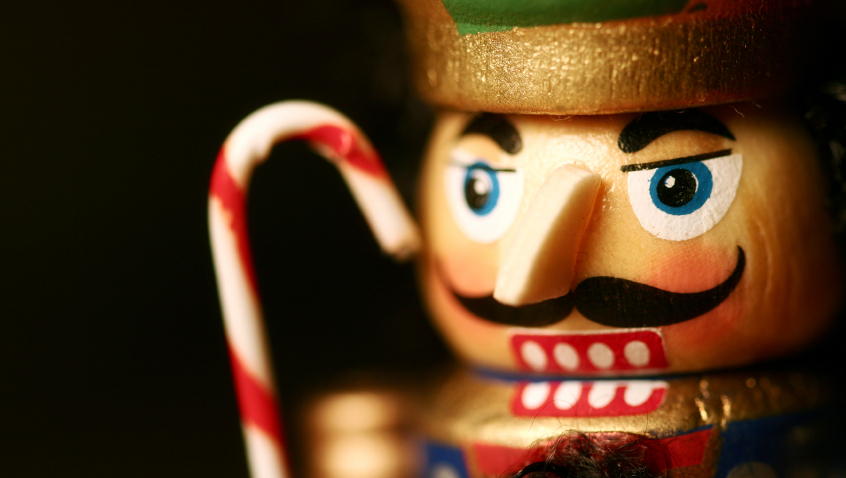 E.T.A. Hoffmann's original story, "Nutcracker and Mouse King," is darker and spookier than the ballet version most people know.

This is the time of year when one man's work is widely — if indirectly — celebrated. His name used to be hugely famous, but nowadays, it draws blank stares, even from people who know that work. We're speaking about E.T.A. Hoffmann, original author of The Nutcracker.

You may have seen Hoffman's name recently in Matthew Guerrieri's new book The First Four Notes: Beethoven's Fifth and the Human Imagination. Guerrieri says that one of the most influential reviews of that work was written in 1810 by E.T.A. Hoffmann, not long after the symphony was first performed. "It was really both the first extended review of the Fifth Symphony that we have," he tells NPR's Robert Siegel, "and it was also really this one particular review that is the bridge between Beethoven as a composer of the classical era and Beethoven as this sort of almost musical mascot of the German Romantic movement, which really became one of the most long-lasting and persistent images of Beethoven that we have."

But here's a crucial detail about Hoffmann's review — when he wrote it, he hadn't actually heard the Fifth Symphony. He had only read the score. "It's a feat of imagination in a lot of ways, but it would have been standard for the time," Guerrieri says. "But it also explains why it's a review much more about the nuts and bolts of the piece of music than how it actually would be experienced in a concert hall, and I think it's one of the reasons that he's able to, in the review, talk about the experience of it in a language and in a manner that's far more heightened than we would ever really experience."

Before he delved into the musical play-by-play of his review, Hoffmann wrote that music "reveals an unknown kingdom to mankind: a world that has nothing in common with the outward, material world that surrounds it, and in which we leave behind all predetermined conceptual feelings in order to give ourselves up to the inexpressible."

"To our ears, that sounds very esoteric and very high-flown," Guerrieri says, "but what the Romantics were really trying to do — and Hoffmann was very much a member in good standing of the German Romantic movement — they were, they had this problem of trying to put into language how we experience beauty."

Hoffmann was actually named Ernst Theodor Wilhelm Hoffmann, but he changed the Wilhelm to Amadeus out of admiration for Mozart. And he didn't just write about music, he also composed it. He drew, he painted and — again, here's the connection to this time of year — Hoffmann wrote stories, spooky tales that trespassed the border between fantasy and reality. They were such famous stories that other composers readthem and set them to to music throughout the 19th century — for example, Jacques Offenbach's opera, The Tales of Hoffmann.

One of the episodes in The Tales of Hoffmann is based on a story called "The Sandman," in which evil inventors create a robotic girl. It was also — loosely — the basis for Leo Delibes' comic ballet Coppelia, about the misadventures of a young man who falls in love with a life-size dancing doll.

Inanimate things come to life in many of Hoffmann's stories. He was a champion of the imagination run wild. Retired University of Minnesota German professor Jack Zipes says Hoffmann was rebelling against the dominant movement of the time, the Enlightenment, and its emphasis on rational philosophy. "He believed strongly, as most of the German Romantics at that time, that the imagination was being attacked by the rise of rationalism ... throughout Europe," Zipes tells Siegel. "The only way that an artist could survive would be to totally become dedicated to another way of looking at the world, and to reclaiming nature, reclaiming innocence, reclaiming an authentic way of living." 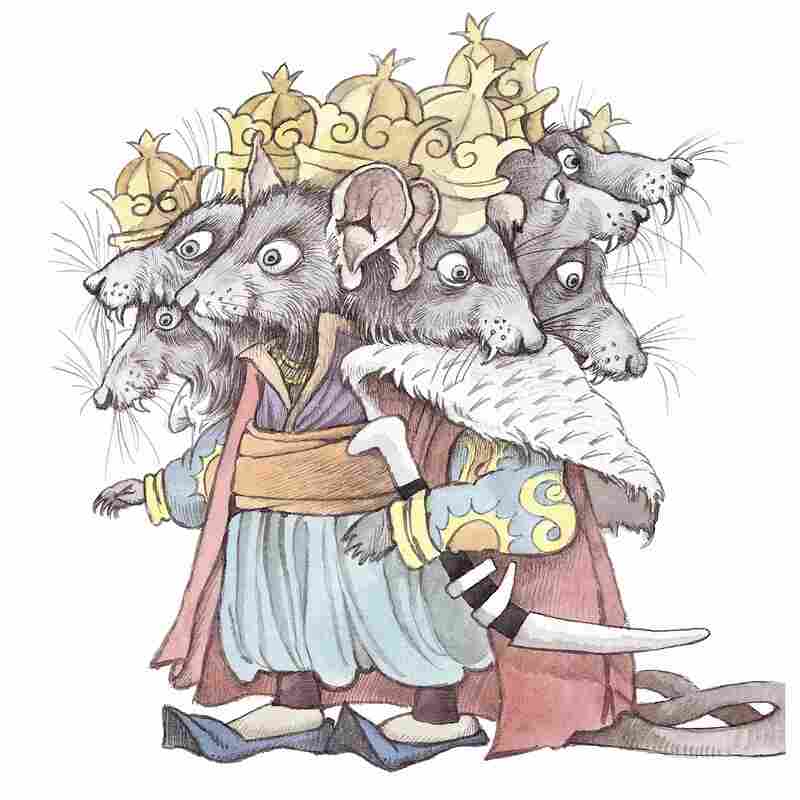 Maurice Sendak worked on a version of The Nutcracker for the Pacific Northwest Ballet in 1983, and put out a book in 1984. He described Hoffmann's story as having "bite and muscle, the way the Grimm fairy tales do." Courtesy of Crown hide caption

One of Hoffmann's stories was adapted by the French writer Alexandre Dumas. It was the tale of a little girl, Marie, and her Christmas toys. Hoffmann's title for it was "Nutcracker and Mouse King."

In this original version, a Marie worries about a beautiful nutcracker that's been broken. At night, she goes to check up on it. To her surprise, it has come alive, and a story-within-the-story begins: armies of mice and toy soldiers battle in what is either the child's delirious nightmare, or perhaps another reality into which she wanders.

Alexandre Dumas altered that original version, making it lighter and less scary. And in 1892 a team of Russians turned Dumas' version into a ballet. The Nutcracker did not enjoy great success at first, but the music by Pyotr Ilyich Tchaikovsky eventually did. And staging it has become a Christmas season ritual, sugar plums and all.

But something happened to Hoffmann's story in this progression from dark to light: Marie became Klara. Her flights of imagination became sweeter and more tame. And her real life family — called Silberhaus (which is German for "Silver House") in the ballet — became sweeter, too.

"What is interesting are the names, sometimes, that Hoffmann uses sometimes in 'The Nutcracker and the Mouse King,'" says German professor Jack Zipes. "The family in his story, in contrast to the ballet, is called Stahlbaum, which means 'steel tree.'" Marie, Hoffmann's protagonist, "is imprisoned within the regulations of the family, the family follows rituals in a prescribed way, and she feels somewhat constrained by this."

Then, Marie's strange and provocative godfather, Drosselmeier, appears.
"It's very difficult to translate the word 'Drosselmeier,' but it's somebody who stirs things up," Zipes says. "And Drosselmeier certainly shakes things up. He brings these amazing toys that he's made, and ignites the imagination of the young people in the celebration of Christmas."

In the 1980s, the Pacific Northwest Ballet wanted to return to Hoffmann's original version. They turned to an illustrator and writer who was famous for his own dark voyages with childhood demons: Maurice Sendak, author of Where the Wild Things Are. "So when I did read it, I became very interested, because it was a very bizarre story. Is a very bizarre story, and that of course would appeal to me," Sendak told NPR in 1984. "It meant something. It had bite and muscle, the way the Grimm fairy tales do. So I thought, if we could put up on the stage in Seattle, anything approximating Hoffmann without diluting or bashing Tchaikovsky, then perhaps we would have something that was interesting." And Sendak's version of The Nutcracker — with his sets and libretto — is the only version that Jack Zipes says captures Hoffmann's original spirit.

Now, stories evolve from one author and one medium, to adapters and new media. But Zipes says that what has been lost from most productions of The Nutcracker is Hoffmann's very attitude about imagination, reality and childhood. "There is a great deal of damage done to Hoffmann's story, because at the end of his story, Marie moves off into another world, or it seems that she's going off into another world, a world of her own choosing," he says, "whereas in the ballet, it's a harmless diversion that is full of sort of dancing and merriment, but there's nothing profound in the ending of the ballet as it exists. And it's also true of Dumas' story — ends in a very fluffy, saccharine way."

Hoffmann, Zipes adds, wanted to make sure his readers knew that Marie was aware of the contrast between her life with the rule-bound Stahlbaums, and the dream world of The Nutcracker, "a world of imagination, a world of her choice, where she can also make decisions that are more in accord with her own imagination."

This essence is in almost all of Hoffmann's fairy tales, and essentially it's that we have to keep in touch with the child within us.

You might, perhaps, draw a comparison between Marie and Dorothy, who's whisked off to magical adventures in Oz — Dorothy's adventures are a dream, and her ultimate lesson is that "there's no place like home." But for Marie, there's nothing like getting away from home, nothing like breaking loose from her dreary family life.

"The MGM movie of The Wizard of Oz also ruined L. Frank Baum's The Wizard of Oz," Zipes laughs, "because he went on to write 13 more stories, and Dorothy eventually leaves Kansas forever and lives in Oz." Nevertheless, he adds, Maurice Sendak talked about Tchaikovsky's music retaining some of the wilder spirit of the original story, "and it's that which he tried to change in his version. He saw in the music itself something that excited him, something that really touched upon the essence of the Hoffmann story, and it's this essence is in almost all of Hoffmann's fairy tales, and essentially it's that we have to keep in touch with the child within us."

By the way, E.T.A. Hoffmann, who challenged his readers to liberate their inner child from the routines of lives led in deference to the reational real world, was no Bohemian in his own life. He was trained as a lawyer and worked as a judge. His art couldn't pay the bills.

Hoffmann was a towering figure for decades after his death in 1822, but Zipes says that fame had faded by the end of the 19th century. "Even today, most American intellectuals, American professors of literature, have not read Hoffmann, and it's a shame, because they're very relevant to our own society today, where the imagination, in my opinion, is being deteriorated throughout our country."

Read an excerpt of Nutcracker