Accessibility links
Just Who Was The Real St. Nicholas? People around the world are celebrating Christmas - and perhaps enjoying a few gifts from Santa Claus. But many don't realize Saint Nicholas was a real guy. Guest host Celeste Headlee talks with Adam English, author of The Saint Who Would Be Santa Claus, about the real Saint Nicholas. 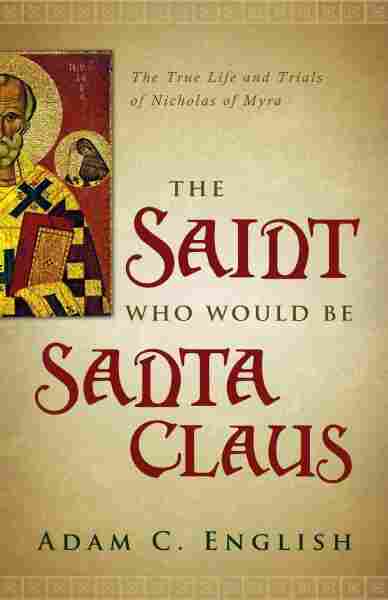 The Saint Who Would Be Santa Claus

The True Life and Trials of Nicholas of Myra

Title
The Saint Who Would Be Santa Claus
Subtitle
The True Life and Trials of Nicholas of Myra
Author
Adam C. English

If you celebrate Christmas, you may have found some presents under the tree, and you may believe those mysterious presents came from a jolly old man in a red suit.

He has a lot of names, including Santa Claus, Kris Kringle, Sinterklaas, Noel Baba, Popo Gigio — and of course — St. Nicholas. But believe it or not, St. Nicholas was a real man. He was a bishop, living in the 3rd century, in what's now modern-day Turkey.

Professor Adam English of Campbell University in North Carolina pieced together the life of St. Nicholas in his new book, The Saint Who Would Be Santa Claus: The True Life and Trials of Nicholas of Myra.

St. Nicholas oversaw a massive transition in the Christian faith, including participating in the Council of Nicaea — the first ecumenical council. Legend has it that he slapped a famous heretic with his sandal. English says the story isn't true, but his bones show that he had a broken nose.

"So perhaps he did have a violent past, or perhaps he did get into a scuffle or two in his lifetime," English tells NPR's Celeste Headlee. But there was one true story that somehow captured the imagination of Christians for centuries.

English says that as a young man, Nicholas had inherited a sum of money. Nicholas hears about a man in town with three daughters on the verge of destitution. So he bags up some gold, and in the middle of the night, anonymously tosses the bag through the window.

Nicholas repeats the act two more times so that the family could use the money as dowries for the daughters, English says. Later legend adds that the window was locked, so Nicholas drops the bag down the chimney, where it lands in a stocking waiting by the fire to dry.

By the twelfth century, English says, nuns in France were making little gifts, leaving them on the doorsteps of children, and signing them "from St. Nicholas."

None of this, however, was actually connected to Christmas or Christ's birth. St. Nicholas Day is celebrated on December 6th.

English says that Santa Claus was initially introduced into the American context in the early 19th century. It was a combination of the day's proximity to Christmas, and an effort by prominent New Yorkers to reclaim their European heritage.

Today's image of Santa Claus is very different than that of the original St. Nicholas of Myra. English says he loves the stories of the jolly old man, with rosy cheeks, and a hearty laugh. But he wants to challenge Americans to consider the true story behind St. Nicholas.

Read an excerpt of The Saint Who Would Be Santa Claus