Accessibility links
A Lull Until New Year's? Not So These Days The week between Christmas and New Year's used to be a sleepy spot on the American calendar. Nowadays, it's crammed with people rushing around reminiscing with friends and families, returning presents and raking in gift-card booty. Others, even perhaps members of Congress, go straight back to work in this fiscal cliffhanger of a year.

A Lull Until New Year's? Not So These Days

A Lull Until New Year's? Not So These Days 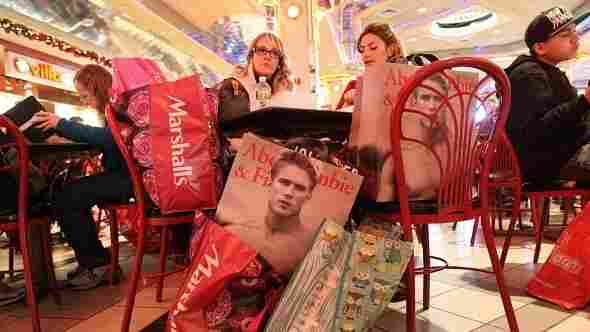 Time was, the stretch following Christmas Day until New Year's Day was a quiet, sleepy spot on the American calendar. The six-day span hung like a lazy hammock between the holidays.

Nowadays, the WAC — Week After Christmas — is busy and abuzzing. All around the country, Americans continue to celebrate — Kwanzaa, the Christmas afterglow and the coming New Year.

It's a mashup week that morphs from cozy fires to fireworks, from prayer books to party hats, from holly berries to hangovers. Such a strange straddling seems particularly American, like Baltimore sprawling into Washington or barbecue sauce slopping over coleslaw.

Some people spend the time rushing here and there to reminisce with friends and families, returning useless presents and raking in gift-card booty.

Others run right back to work. According to research provided by the Society for Human Resource Management, about 99 percent of companies in the United States shut down on Christmas Day and 95 percent on New Year's Day. Only 12 percent are closed for the week between the two national holidays.

"The final week of December can account for as much as 15 percent of a retailer's holiday sales," says Kathy Grannis of the National Retail Federation. The NRF reports that in 2011, holiday season sales represented nearly 20 percent of total retail industry sales for the year.

So, Grannis says, the week after Christmas "is still a very important part of the holiday season."

Even Congress, often criticized for not working hard enough, may be in session to try to prevent the country from going into fiscal free fall because of the debate over taxation. "If the Senate passed a bill Dec. 27, the House Rules Committee could schedule a vote for the following day," reports Time magazine. "The last time the Senate held a roll call vote in the week between Christmas and New Year's was in 1963, according to the Senate Historical Office."

Meanwhile, the Harvey B. Gantt Center for African-American Arts + Culture in Charlotte, N.C., is opening up on certain days for Kwanzaa, a post-Christmas festival that highlights seven basic values of African culture. The emphasis is on family, community and culture among African-American people and Africans around the world.

On Dec. 29 — the fourth day of the seven-day observance — there will be a daylong celebration of cooperative economics, including dancing and arts and crafts.

Other places will be open during the week as well. The Free Soul Dance studio in Blasdell, N.Y., is scheduled to hold special classes, and Wolfe's Pheasant Farm in Fountain City, Wis., plans to stage hunts following Christmas. In Branson, Mo., the 3 Redneck Tenors — Billy Bob, Billy Joe, and Billy Billee – are slated to perform several nights.

For the museums of the Smithsonian Institution in Washington, D.C., the week after Christmas "is one of the most popular times," says spokesman John Gibbons, "with thousands of visitors, rivaling spring break and summer vacation."

It's a week, Gibbons says, "when houses are full of children out of school and out-of-town guests for the holidays. What better way to keep everyone happy, busy and interested than visiting the Smithsonian's many museums?"

He adds, "We're even more attractive as a destination after the expenses of the holidays because all our museums are free. Where else can you visit Mars, hold a hissing cockroach and critique what the first ladies wore to dinner all in one day?"

In the Christian tradition, the week is part of Christmastide. Back in the olden days, Christmas began on Dec. 25 and lasted until Epiphany — the day that the divine nature of the infant Jesus was revealed to the Magi — on Jan. 6. This is best illustrated in the popular song The 12 Days of Christmas

Now, the more secularized Christmas season in America kicks off around Thanksgiving and pretty much winds down on Christmas Day when the final gifts are passed around.

In the book of essays We Are What We Celebrate: Understanding Holidays and Rituals, sociologist Amitai Etzioni divides traditional American holidays into two types: holidays of recommitment, such as Easter and Passover, and holidays of tension management, such as Mardi Gras and St. Patrick's Day.

The 144-hour period we're talking about flows from a recommitment holiday (the end of Christmas Day) to a tension management one (the beginning of New Year's Day).

In this fiscal cliffhanger of a year, Americans may need to blow off a little steam — when it comes to taxation and representation — at the end of December.

Back in England, many traditions have changed. Some have not.

During the week after Christmas, which includes Boxing Day on Dec. 26, "most offices are closed, although hospitals, police stations, emergency services, newsrooms, some shops — and, of course, pubs — stay open," says Alexandra Dimsdale of the British Council, the U.K.'s cultural relations organization.

Usually, it's a very quiet time, Dimsdale says, "where people stay at home or visit family."

And, presumably, the open pubs.