Accessibility links
'Hyde Park': An FDR Portrait That's More Fiction Than Fact Hyde Park on Hudson tells the story of a love affair between Franklin Delano Roosevelt and his distant cousin Margaret "Daisy" Suckley. Historian Geoffrey Ward evaluates the accuracy of the new film and finds it lacking. "It's a very odd film," he says. 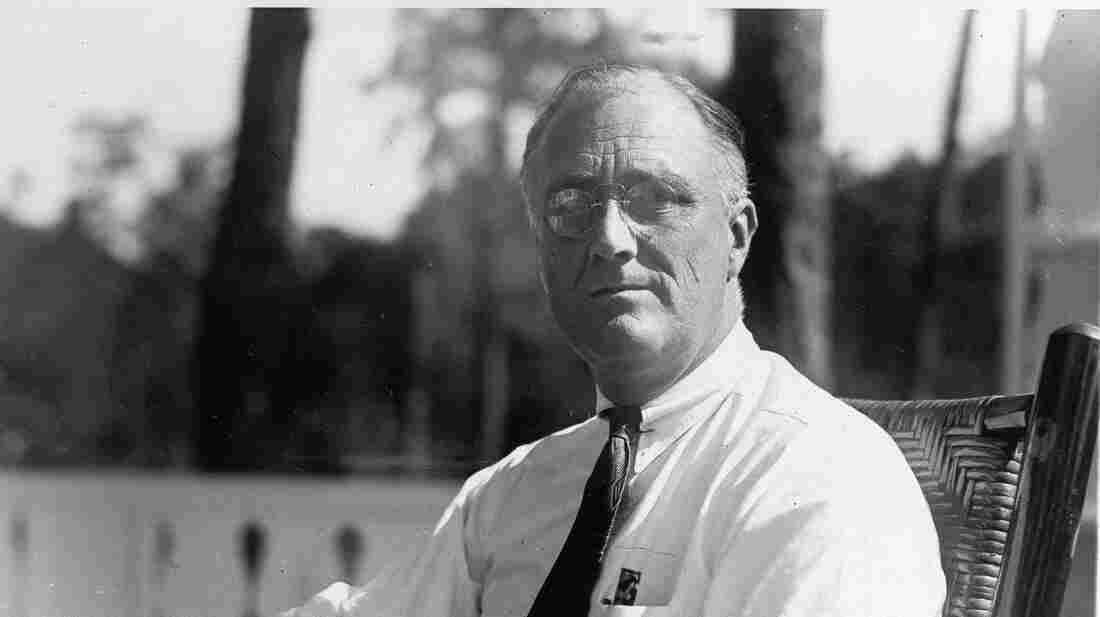 This week, we've truth squadded the recent biopics Hitchcock and Argo, and today, we turn to Hyde Park on Hudson. The new film tells the story of a love affair between Franklin Delano Roosevelt and his distant cousin Margaret "Daisy" Suckley. But how much of this is fact and how much is fiction?

Geoffrey Ward, editor of the book Closest Companion: The Unknown Story of the Intimate Friendship Between Franklin Roosevelt and Margaret Suckley, evaluates the accuracy of Hyde Park with NPR's Robert Siegel. 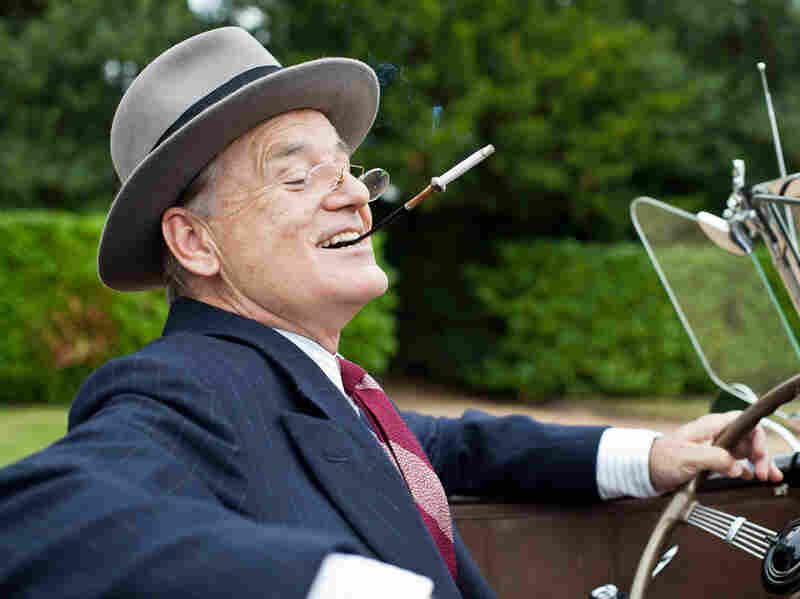 A car, a distant cousin and visiting dignitaries all converge in Hyde Park on Hudson. Nicola Dove/Focus Features hide caption 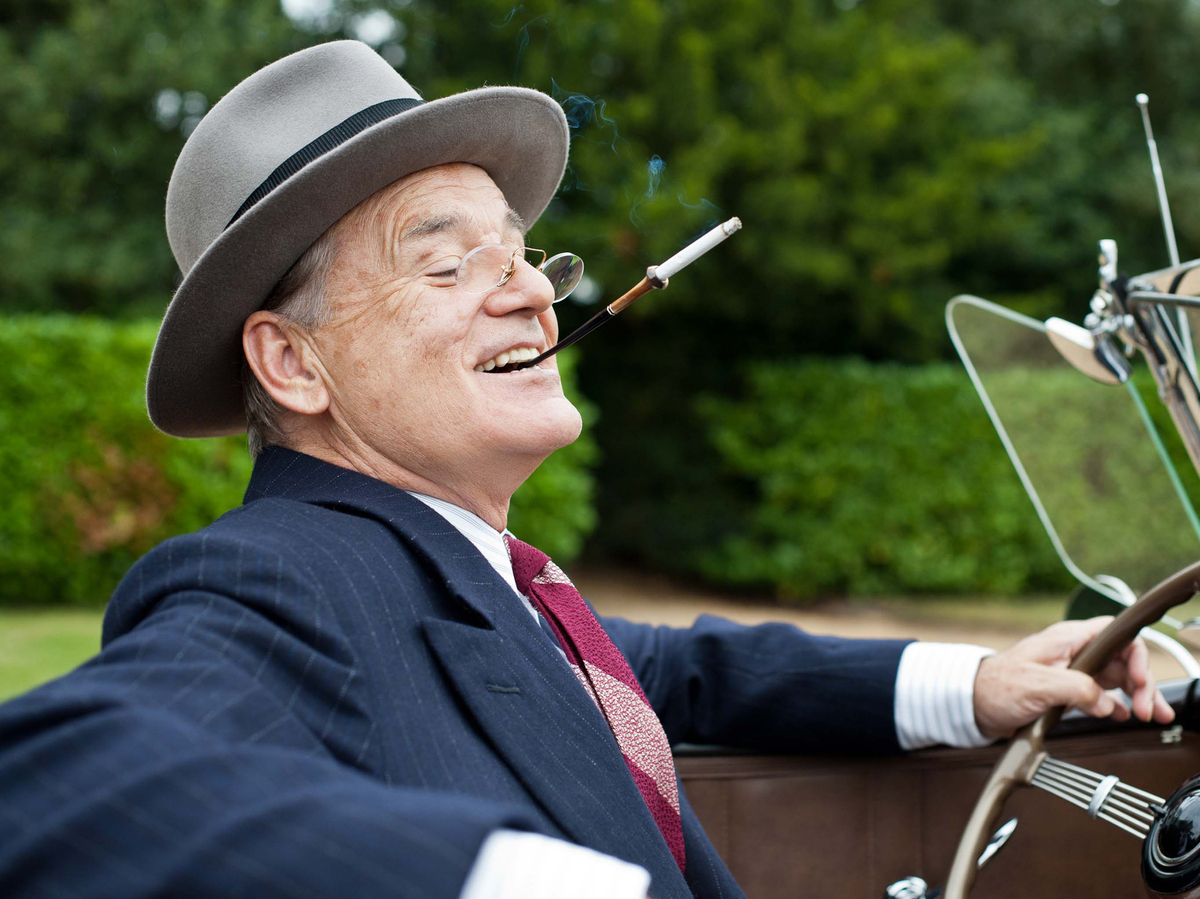 A car, a distant cousin and visiting dignitaries all converge in Hyde Park on Hudson.

On Bill Murray's representation of FDR

"Bill Murray is a wonderful actor and he's very funny and I've seen him be serious and terrific. [But] I thought he was very poor, I'm afraid. And I'm not sure it's his fault — I think it's partly the script, which is an odd script. He does a jaunty cigarette, and they did their best to make him look like [FDR], but he doesn't have the self-confidence that the actual man had, or the sort of upper-class self-confidence that was very important to Roosevelt."

On how well the film captures the relationship between Roosevelt and his cousin Daisy, who is played by actress Laura Linney

"Well, can I say first, Laura Linney is absolutely terrific in the film. Basically, I think they just get it wrong. Just to talk about the cottage that he [surprises Daisy with in the film] — they planned that cottage together. There are endless letters between the two of them about how they were going to arrange the rooms inside, and so on. So the whole notion that it was a surprise is silly. It's a very complicated, quite19th century relationship."

On FDR and Daisy's romantic encounter in a car

"It is true that they drove to a hilltop that they loved at some point in 1935, and that something happened on that hilltop. I think he kissed her — which meant a great deal to both of them. And it started a long, first flirtatious and then very fond friendship. But what happened in the film did not happen."

On how the film treats FDR's polio

"Well, I have a lot of views. I had polio myself, and I spent a lot of time studying [FDR's] life. And the movie has it upside down. First of all, he's seen doing all kinds of things in the film which he never could have done. He could not walk on crutches by himself. He couldn't walk with two canes, which he does in a particularly silly scene. And in order to stand, he had to be in braces, which went all the way up above his hips. And I don't understand why in the film they felt the need to get that wrong. They have something called a 'polio adviser' among the credits — he clearly had not done his homework."

Fact Checking 'Argo': A Great Escape That Takes Some Leaps

"The king and queen came because FDR pretty much insisted they come in order to demonstrate friendship between the United States and Britain, which was about to get into the war. And they had met in Washington before they ever meet in the film. But more importantly than that, they are portrayed as sort of — I don't know how else to say it — sort of cartoon people. They, at one point, they get out of the car on the way to Hyde Park and wave at a farmer, who doesn't bother to wave back. And it gets a laugh, but actually, hundreds and hundreds and hundreds of people lined the highway between New York and Hyde Park to see the king and queen go by. No king and queen had ever come here.

"And then there's just a ludicrous conversation between Roosevelt and the king, in which FDR tells him that he is sorry that people don't ever mention that he had polio, and that they overlook it. Well, he spent his whole lifetime trying to keep people from knowing that he had polio. "

On what the film got right

"Not a lot, I'm afraid. You know, it's interesting for people to learn that the Roosevelt marriage was complicated. And, you know, Murray tries very hard. He comes off as a sort of henpecked, not very strong man, who in order to get women, shows them his stamp collection. Now, I would think stamp collectors all over the world would be thrilled to learn that if you wave a photo album at women they fall at your feet. This is not the experience I think of most stamp collectors. It's a very odd film."