Accessibility links
Syria's War Leaves Its Scars On The Children Many Syrian children have lost family members and are suffering from post-traumatic stress disorder and depression. Even those who have fled into neighboring Turkey have not been able to leave the trauma behind.

The war in Syria is taking a huge toll on the children. An international team of researchers that interviewed Syrian kids in a refugee camp in Turkey found that 3 out of 4 have lost a loved one. Almost half have post-traumatic stress disorder and elevated levels of depression.

There are efforts to help, but it's challenging. In the southern Turkish city of Gaziantep, the bell rings at 8 a.m. at the Friendship Elementary School. Syrian kids, in fresh school uniforms, cram into desks, with more than 40 students in every classroom.

The Turkish government provided the new building, with a garden and brightly painted walls. Syrian parents and volunteer teachers run the school, free of charge for the students, who number 270 and are increasing by the day.

The volunteer teachers offer the Syrian curriculum from textbooks collected from schools that have closed back home. 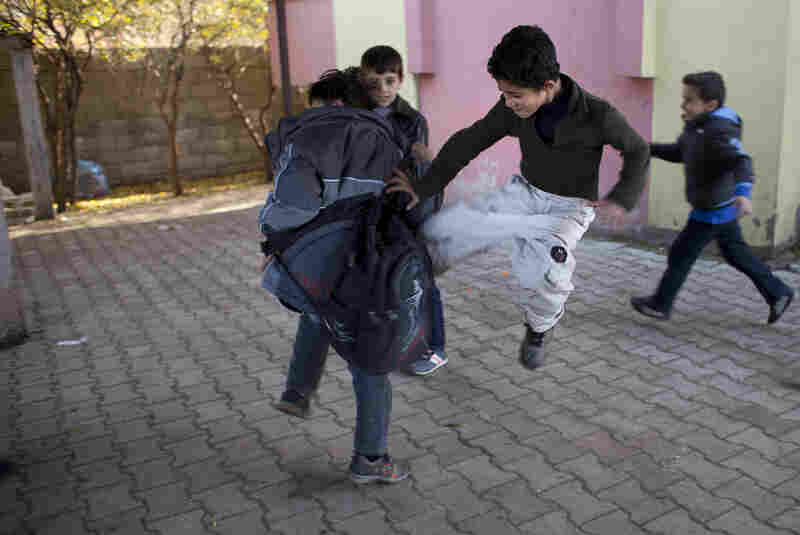 Some Syrian children play at wrestling and fighting during recess at the Albashayer School for Syrian Refugee Children. This type of play can be common among children who have witnessed traumatic events. Jodi Hilton for NPR hide caption

The school offers a few hours of normalcy for the children, but the war in Syria has already warped their lives.

Khamis recalls a boy who enrolled within days of fleeing the northern city of Aleppo after a bomb exploded in front of his house.

"He can't speak any word for three days," she says.

And so the teachers encouraged the silent boy to draw.

"He draws only windows –- closed windows –- and then he opened the window. Why? We don't know. We asked him, 'What do you mean by the open window?' He can't speak," Khamis says.

All the kids were sad when they were forced to leave home, says Khamis, who does her best to cheer her students.

These teachers were forced out, too. They are part of the professional class in Aleppo, Syria's largest city and its business capital.

They bring specialized skills to this overcrowded school in Turkey. Manar Munal Hasan, a medical doctor, is now the school psychologist. She says she sees signs of trauma. 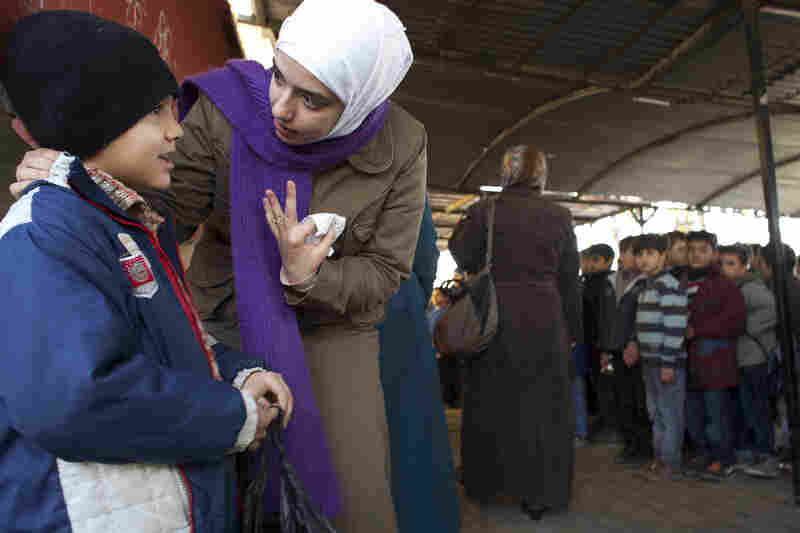 Teacher Rahaf Al Tinawie counsels a student outside class at the Albashayer School for Syrian Refugee Children. Al Tinawie says many children show signs of trauma and she sometimes meets with parents to discuss the problems the children are facing. Jodi Hilton for NPR hide caption

Though the children are now in a safe area in southern Turkey, many say they don't feel secure and worry about relatives still in Syria.

"All of my relatives, and my grandparents, are in Syria and I don't have anyone to play with," says Yaman, age 7, who comes from Aleppo. "They might die. Many things can happen."

A new study warns that Syrian children are the hidden casualty of the war.

Researchers from Turkish and American universities, as well as Norway's Institute of Public Health, interviewed more than 300 children in a refugee camp on the Turkish border.

Preliminary findings were released at a news conference in Washington. Dr. Selcuk Sirin, a psychology professor at New York University, says they are disturbing.

"We are talking about a very traumatized group," Sirin says. "If we do not do our job as an international community of adults, these kids will go untreated with high levels of depression, high levels of PTSD. This will come back and haunt us in the future."

The warning about a haunting future can be heard clearly in an old apartment building in Antakya, Turkey, which also serves as a school for Syrian refugees.

Rahaf Tinowi, who is only 20, works as the school councilor. She says the children have been damaged by the war.

And it is a very hard job to change those views, she says quietly, after all that these children have witnessed.

NPR's Michele Kelemen contributed to this report from Washington.