Accessibility links
Jakarta's New Governor Seen As A Rising Star Most Indonesian leaders have been generals or bureaucrats who came to power by building patronage networks, not by providing services to citizens. But Jakarta's new governor, who has been in office only a few months, has already won widespread popular support. 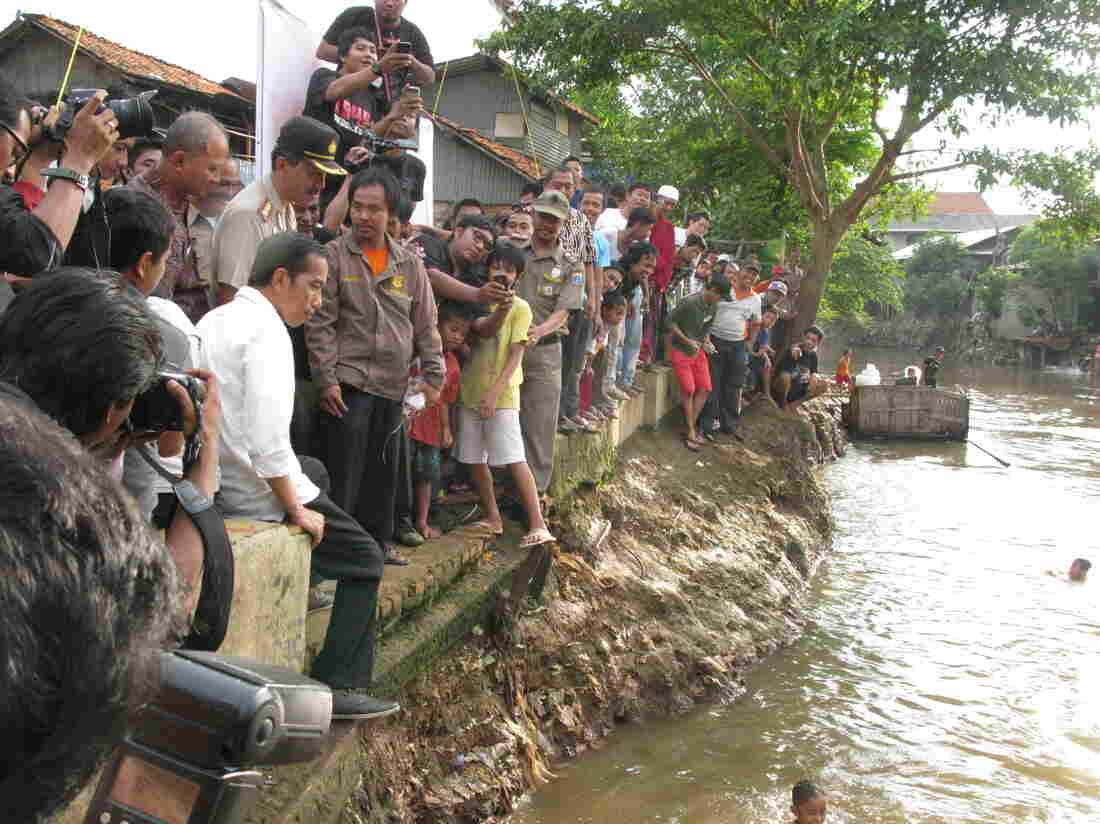 Jakarta Governor Joko Widodo (in white shirt, at left) examines the muddy waters of the Ciliwung River in Jakarta. The city government is planning to dredge the river and relocate residents away from its banks to prevent chronic urban flooding. His talk of providing more services has won him widespread popular support. Yosef Riadi for NPR hide caption 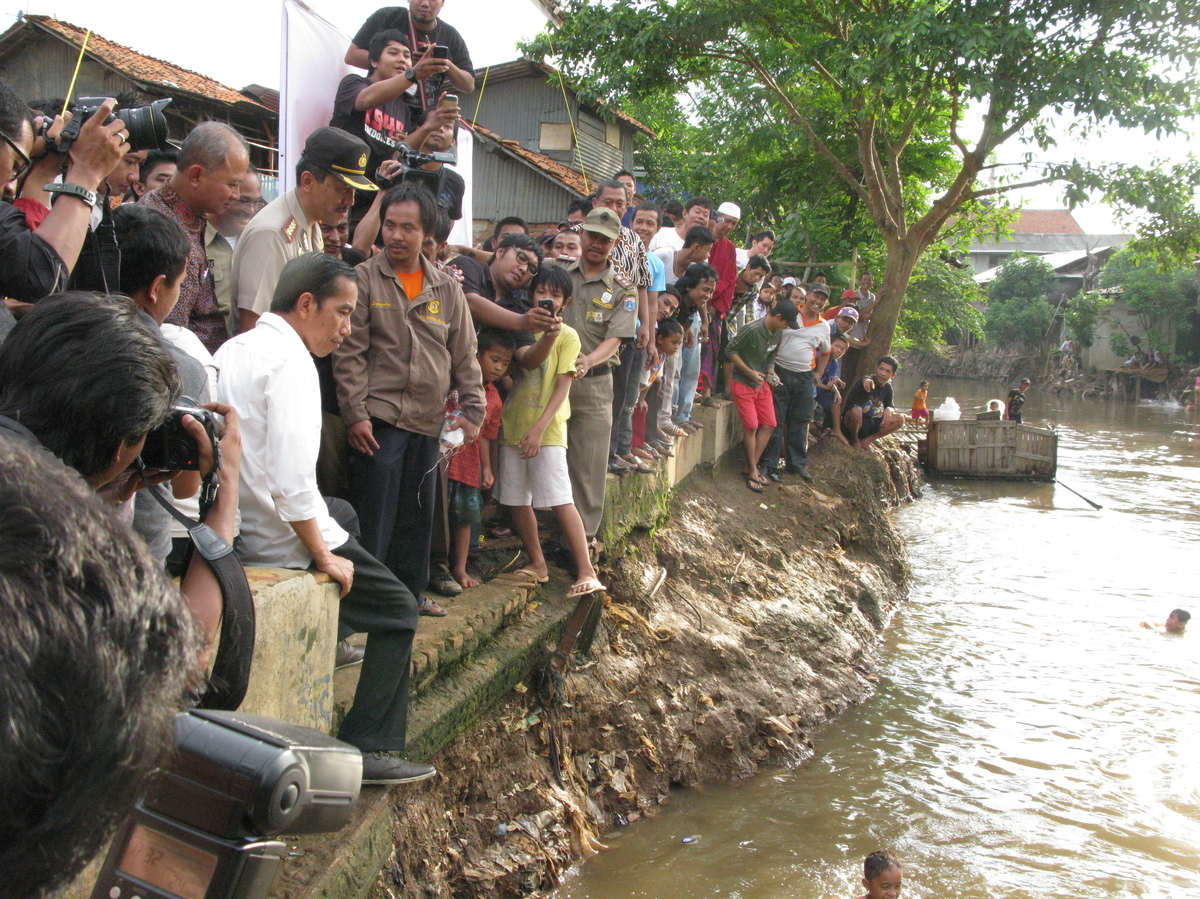 Jakarta Governor Joko Widodo (in white shirt, at left) examines the muddy waters of the Ciliwung River in Jakarta. The city government is planning to dredge the river and relocate residents away from its banks to prevent chronic urban flooding. His talk of providing more services has won him widespread popular support.

Residents give a boisterous welcome to Jakarta's newly elected governor, Joko Widodo, when he shows up for a town meeting with the residents of a Jakarta slum where residents' shacks overlook the muddy, garbage-strewn waters of the Ciliwung River.

The governor's administration plans to fix chronic flooding here by dredging the river and moving residents into subsidized apartments.

One resident tells the governor that he and his family have been living in this neighborhood since before 1945, when the East Indies were still a Dutch colony, and he doesn't want to be relocated. Some neighbors agree heartily.

Most folks refer to the governor, a former furniture salesman, by his nickname, Jokowi. He just became governor of the capital in October. Yet according to some opinion polls, he's already seen as the most popular choice for president in elections in 2014, though he hasn't said whether he will run. 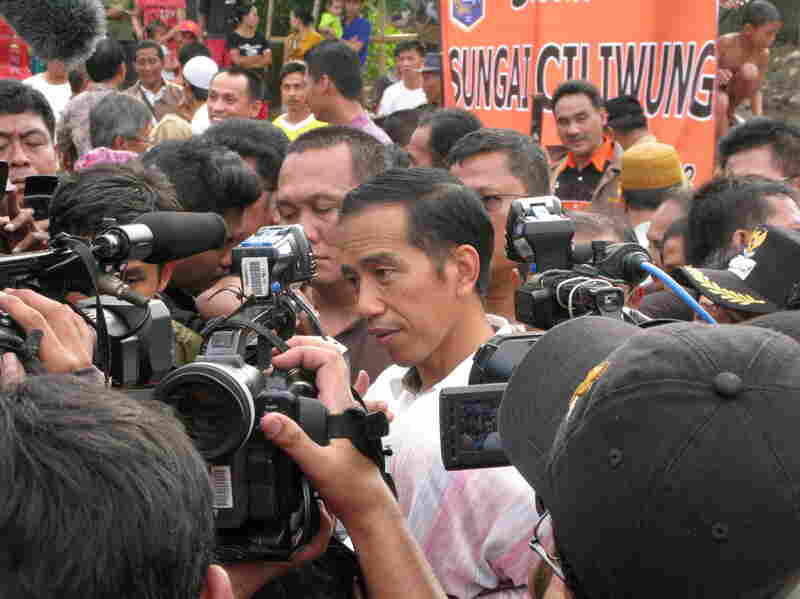 Jokowi faces a daunting task in fixing this city. Greater Jakarta, including its satellite cities, has grown into a megalopolis of 28 million people. Corruption is rampant. The city's gridlock is notorious, and getting worse.

After the meeting, Jokowi explains that he isn't prescribing any solutions yet. He just came to this kampung — or village — to listen.

"Every day we come to the people and we have meetings from kampung to kampung, and from this, we make the policy," Jokowi says.

He sketches a vision of Indonesian democracy based on providing services.

A Change Of Culture

Jokowi built his political track record as mayor of the Javanese city of Surakarta. He won the Jakarta gubernatorial election with a populist touch and an effective social media campaign.

"Previous governor Fauzi Bowo failed to portray himself as a reformer. He still perpetuated too many of the patronage-style habits of typical entrenched political elites in Indonesia, whereas Widodo very much represents an egalitarian, democratic approach to politics," O'Rourke says.

Jokowi has been helped by Basuki Tjahaja Purnama, his ethnic Chinese vice governor, who has done the political dirty work of battling corruption.

O'Rourke says that Jokowi's rise blazes a new path for successful local politicians to make it into national politics.

"That's important because it replaces the past avenues for political leadership which have been from the army and the civil service, and those are areas that are not producing reformers," O'Rourke says.

O'Rourke adds that there are concerns about backsliding of the democratic and economic reforms that have made Indonesia a popular destination for foreign investment in recent years. He predicts that reform will be a defining issue of the next election, and, to Jokowi's advantage, he says, none of the current candidates have any record of reform.