Accessibility links
Birds Hang Around Mistletoe For More Than A Kiss Mistletoe figures prominently during the holidays, offering some holiday cheer and an excuse to steal a kiss or two. But researchers found that removing mistletoe from an Australian forest also caused large numbers of birds to leave. 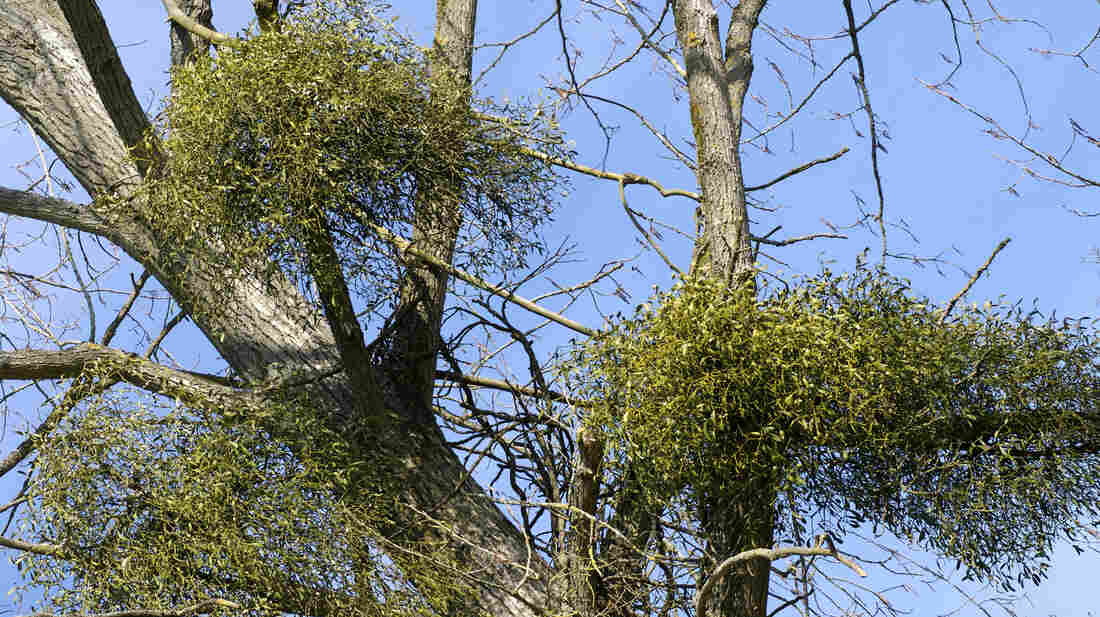 Researchers in Australia found that when they removed mistletoe from large sections of forests, vast numbers of birds left. BSIP/UIG via Getty Images hide caption

For the Druids, mistletoe was sacred. For us, it's a cute ornament and maybe an excuse to steal a kiss. And of course it's a Christmas tradition.

But for a forest, mistletoe might be much more important. It's a parasite, shows up on tree branches and looks like an out-of-place evergreen bush hanging in the air.

Its seeds drill through bark with a threadlike probe and then grow by sapping the energy of its host. And certain types can be nasty pests, especially dwarf mistletoe in the American West.

But it may actually be useful, and more than just as an excuse to make out with someone.

David Watson, an ecologist at Charles Sturt University in Australia, had long suspected this. But nobody had really proved it experimentally. So he did an experiment in an Australian forest.

He just took the mistletoe out.

"Me and a team of 12 volunteers in cherry pickers" — he recalls — "we removed just over 41 tons of mistletoe."

It took five months and then another visit the next season to get it all out.

"The simple act of removing mistletoe led to losses of over a third of the woodland dependent species [of bird]," Watson says. All these birds just left. And weirdly, the birds that took the biggest hit were insect-eating birds.

"Especially the ones that eat insects on the forest floor," Watson says.

What do insects have to do with mistletoe? "It's a byproduct of how parasitic plants do their parasitizing," explains Watson. Parasitic plants are packed with nutrients that they gobble up from their hosts. They suck up all these salts and minerals to create a water gradient between them and their host so they can draw water out of their hosts.

"Parasitic plants the world over have 15 [to] 20 times more concentrated nutrients than their hosts," Watson says.

And because they're moochers, they don't really care about conserving their resources — they can just suck out more. Not so with regular trees, which pull out the good stuff from their leaves before allowing them to fall. But mistletoes just drop their leaves with all the vitamins inside.

"So there is this rain of enriched litter — a bit like mulch, a fertile mulch," as Watson puts it, that falls onto the forest floor under infected trees.

More goodies on the soil, more bugs, more birds that eat the bugs — it might mean more lizards and more mammals too, says Watson. Because of the apparently significant and widespread effects of mistletoe on a forest, he calls it a "keystone resource." He published earlier this year in the Proceedings of the Royal Society B: Biological Sciences.

Brian Geils, a retired forest pathologist for the U.S. Forest Service, says the jury is still out. As to whether mistletoe in the United States improves forest biodiversity in the way that it appears to in Australia, dwarf mistletoe in the Western U.S. doesn't have the same amount of leaf litter. And that particular type of mistletoe can kill trees. So he's hesitant to credit the parasitic plants with a blanket mantle of positive effects.

"It's quite complex to come up with a simple good or bad, more or less," Gelis says

Even so, he does agree that mistletoe has, for its size, a lot of bang for its buck in a forest ecosystem. For example, he says, it can cause some conifers to grow into what are known as "brooms" — strange-looking, twiggy, bushy poles that can act as ladders for fire and that attract a population of insects not normally found in the canopy.

Daniel Nickrent, a professor of plant biology at Southern Illinois University, is convinced mistletoes do have a similar role in North American forests as they do in Australian ones, particularly the phoradendron mistletoe found in the Eastern U.S.

"So does this keystone idea apply to some of the North Americans ones? I think they do," Nickrent says. "There's evidence they do."

Endangered snowy owls, for example, prefer to nest even in the pathogenic dwarf mistletoe. And, Nickrent says, some mistletoes appear to expand the fungal community that lives in soil beneath infected trees. The biggest instances of tree death by mistletoe aren't in natural forests but rather in human-created groves for lumber.

"This is like a beautiful petri dish that's not inoculated yet," he says of the large tree plantations that can be so afflicted by dwarf mistletoe. They're "just waiting for the mistletoes to come in and feed on this. So the human-altered ecosystems are heavily damaged by dwarf mistletoes."

However you look at mistletoe — keystone font of diversity or pathogenic parasite — being under one is a big deal, and not just for people.