Accessibility links
Indian Rape Case Ignites National Debate On Abuse Of Women The Indian woman gang-raped in New Delhi nearly two weeks ago was flown to a hospital in Singapore, and her condition is deteriorating. The attack launched a wave of protests by demonstrators angry at what they see as the government's inability to stop widespread sexual violence against women. 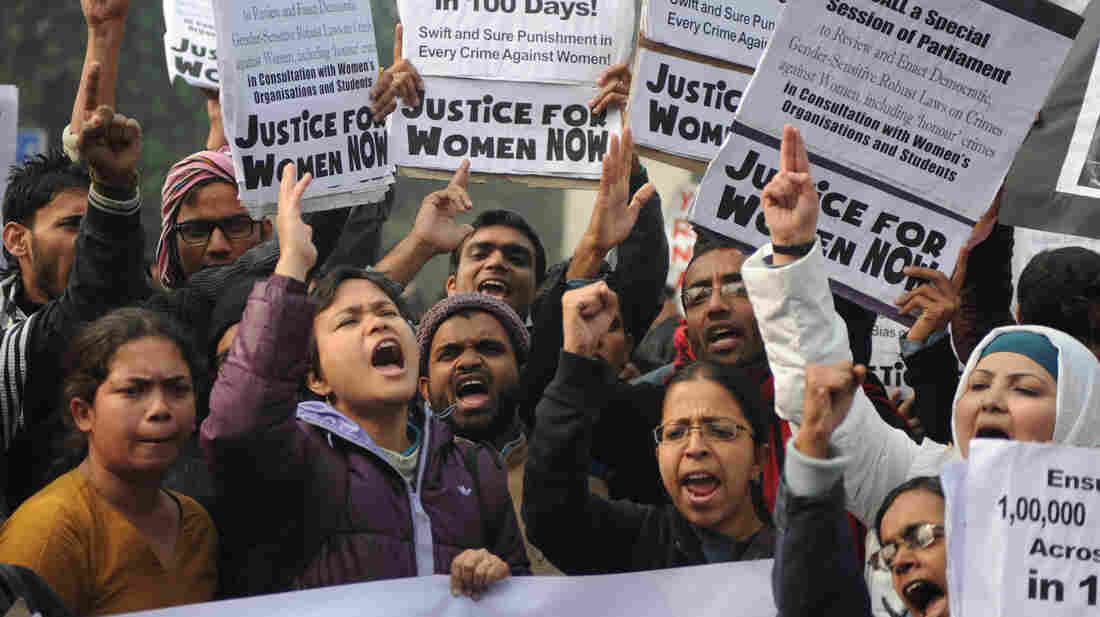 Demonstrators rally in New Delhi on Thursday as part of ongoing protests following the rape of a student in the Indian capital on Dec. 16 Sajjad Hussain/AFP/Getty Images hide caption 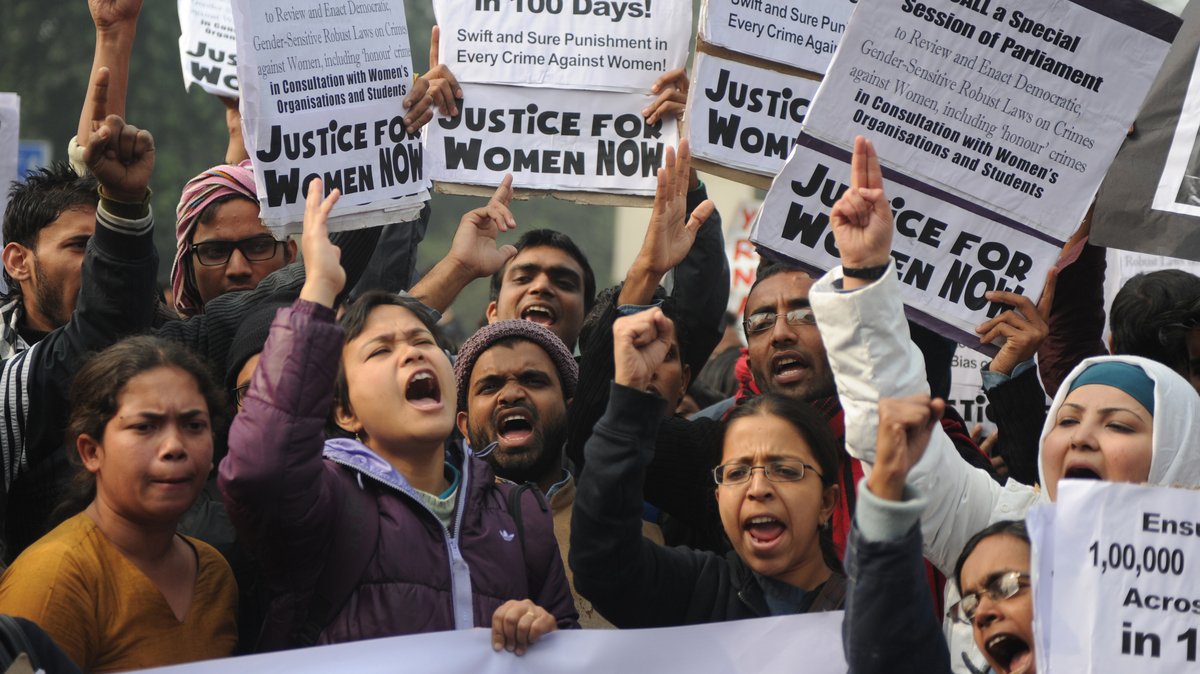 Demonstrators rally in New Delhi on Thursday as part of ongoing protests following the rape of a student in the Indian capital on Dec. 16

Doctors in Singapore are battling to save the life of a 23-year-old Indian woman who sustained grievous injuries in a gang rape that has mobilized mass demonstrations in New Delhi.

Officials at the Mount Elizabeth Hospital in Singapore said Friday that the condition of the patient who arrived Thursday morning is worsening, and that she is suffering organ failure.

With the government facing a public revolt over the level of violent crimes against women, Indian Prime Minister Manmohan Singh is reported to have overseen the decision to airlift the young student to a specialty medical center.

Investigators say the physiotherapy student was beaten with an iron rod, raped by six men in a bus, and left for dead on the side of the road the night of Dec. 16.

The demonstrations demanding justice for the victim reflect not only the public revulsion at the brutality of her attack, but also the simmering rage over the prevalence of sexual violence in India. There were some 228,000 crimes last year against women, up from the year before.

Nasreen Jahan, a 32-year-old woman who joined a small rally in New Delhi on Thursday, was draped in a red woolen scarf against the cold — or so I thought. 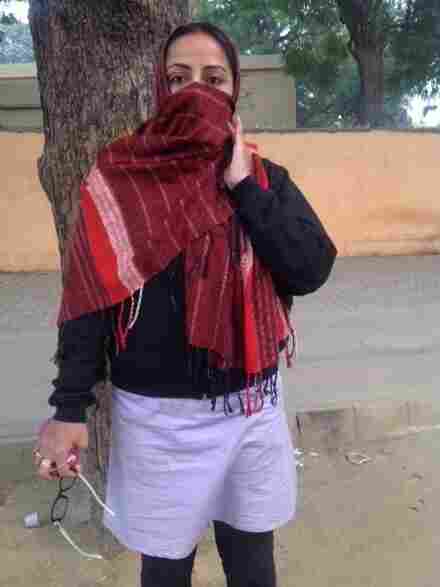 Nasreen Jahan, who was taking part in a protest, said that after her divorce, her husband attacked her with acid, disfiguring her face. Gayathri Sreedharan/NPR hide caption 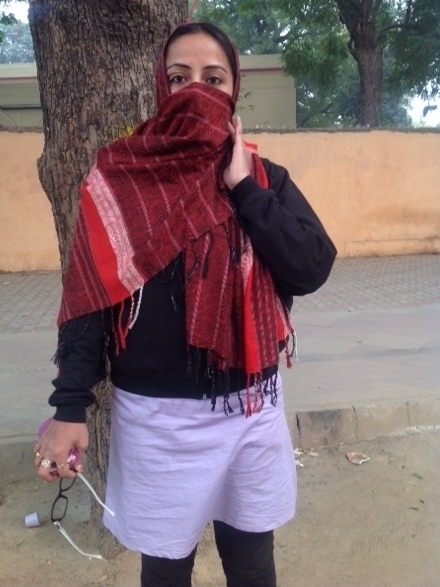 Nasreen Jahan, who was taking part in a protest, said that after her divorce, her husband attacked her with acid, disfiguring her face.

She discreetly pulled back her head covering and revealed a large disfiguring scar.

"I divorced my husband five years ago, and when he tried to take me back forcibly into his house," Jahan explained, "I resisted him. And in retaliation, he threw acid on me. I'm always angry at the kind of violence women suffer. And I know there are people like me ... who will always resist this violence."

A Delayed Response From The Government

Prime Minister Singh said Friday that the public can be assured his government is committed to punishing the guilty. The six accused in the gang rape will reportedly be charged next week.

Singh did not publicly address the rape that unleashed the mass protests until Monday, eight days after the attack occurred. Nor did any government official address the crowds, deepening a perception of indifference.

Unfazed by the public outcry, the president's son, Abhijit Mukherjee ignited new anger Thursday when he described the women protesting the rape as "dented and painted," as if they were a damaged car.

The remark kicked up a storm in India's social media.

She added: "Unless we educate little boys from the time they are in kindergarten, we are not going to be able to prevent these crimes, and all the capital punishment in the world won't make a difference."

In response to public pressure, the government said it will consider changing the law to allow for the death penalty in certain instances of rape.

Critics say it is not harsher punishment but rather investigative and prosecutorial muscle that is needed. Convictions for rape have declined decade-on-decade in India.

Praveen Swami, editor of the The Hindu newspaper, says, "The real battle is to change the way in which men relate to women: to create a culture of masculinity that does not involve subjugation."

Meanwhile, Home Minister Sushilkumar Shinde said he was not obligated to speak to the protesters, and he equated them with Maoist rebels who have long infiltrated the countryside.

The Delhi police, overseen by the central government, used tear gas and water cannons on the protesters, whose ranks included families with children. A police constable died on duty during riots Sunday, though there have been contradictory accounts of what caused his death. Police say he was beaten by protesters. Witnesses who attempted to revive him say he collapsed.

Vinod Sharma, the political editor of the Hindustan Times, says the old ruling guard is out of sync with a new generation of tech-savvy protesters.