Accessibility links
Out Of Desperation, North Korean Women Become Breadwinners In North Korea, profound social change is happening beyond the view of the outside world. The pressure of national ideology has forced women to become the primary breadwinners in many households — dramatically redrawing gender roles in the process. 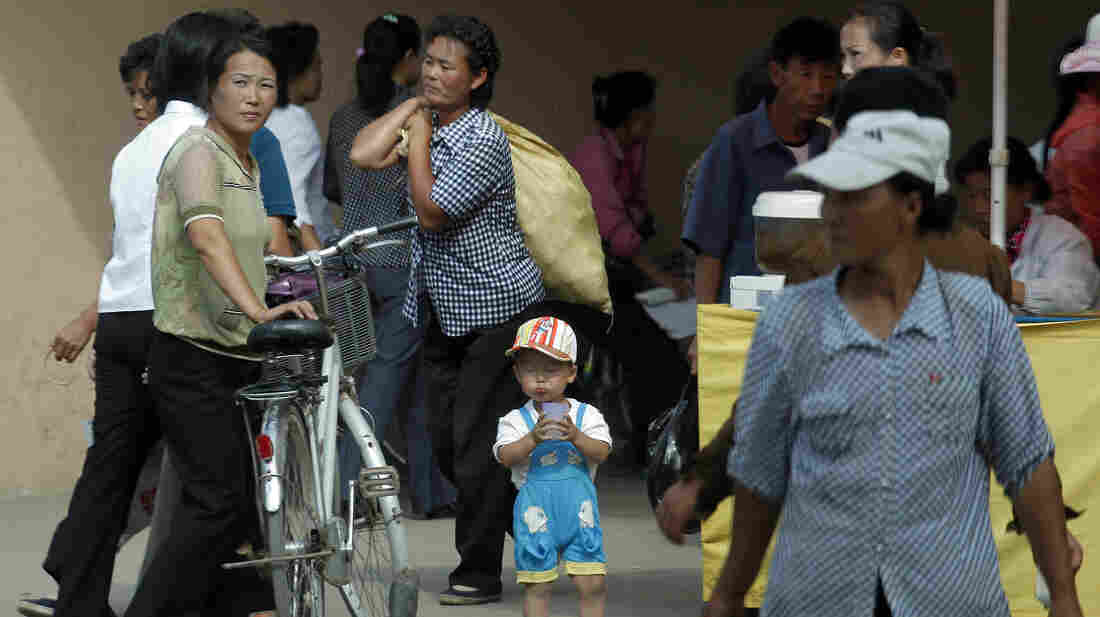 Women shop and trade at a market in Razon city, northeast of Pyongyang, in September. Most private trading, which is the only source of income for almost half of North Korean families, is done by women. Carlos Barria/Reuters/Landov hide caption 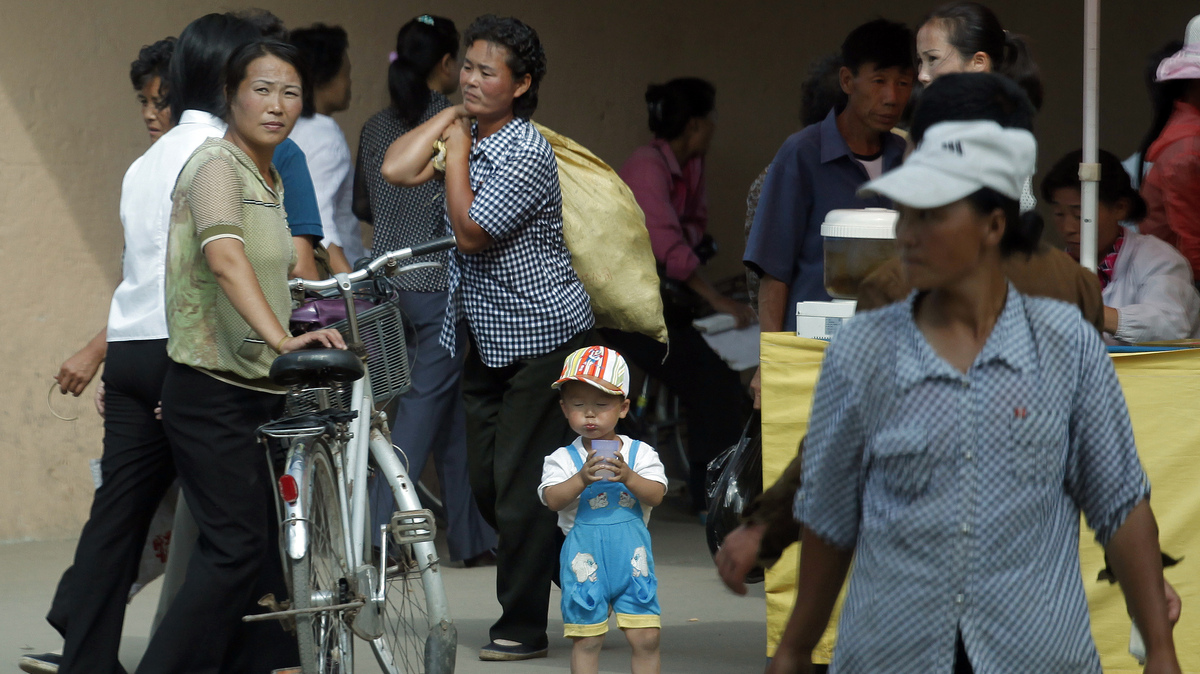 Women shop and trade at a market in Razon city, northeast of Pyongyang, in September. Most private trading, which is the only source of income for almost half of North Korean families, is done by women.

Imagine going to work every day and not getting paid. Then, one day, you're told there's no work to do — so you must pay the company for the privilege of not working.

This is the daily reality facing Mrs. Kim, a petite 52-year-old North Korean. Her husband's job in a state-run steel factory requires him to build roads. She can't remember the last time he received a monthly salary. When there are no roads to build, he has to pay his company around 20 times his paltry monthly salary, she says.

"He had to pay not to work for about six months of last year," Mrs. Kim told NPR, sighing. "You have to pay, even if you can't afford to eat. It's mandatory."

So she is the one who must keep the family alive, as her husband wrestles with this state-sanctioned extortion.

Welcome to the Orwellian world of work in North Korea. In this reclusive country, profound social change is happening beyond the view of the outside world. The demands of politics have dramatically redrawn gender roles, forcing women to become the breadwinners.

Markets Thrive, With Women At The Helm

Five North Koreans visiting China spoke with NPR recently, offering a rare insight into how political dictates have had an extraordinary social impact in their own homes.

All of them count among the elite, who have enough money to enter China legally and hope to return to their families in North Korea. Talking to foreign media is risky, so they are being identified only by their surnames.

"In the past, our husbands would bring home rations, and we'd live off that," says Mrs. Kim. "Now there are no rations, and the women support the families. If we don't make money, they starve, so life is hard for women."

Facing a catastrophic famine in the mid-1990s, the state had reduced — and then mostly stopped — giving out the rations, known as the Public Distribution System. 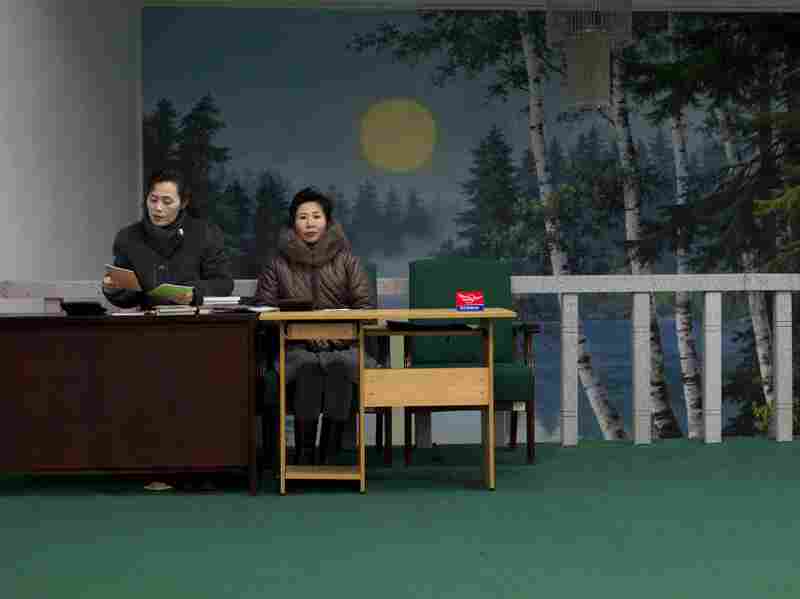 Women work at a bookstore in Pyongyang. With so many men unable to find work and support a family, more young women are willing to delay marriage. Ng Han Guan/AP hide caption 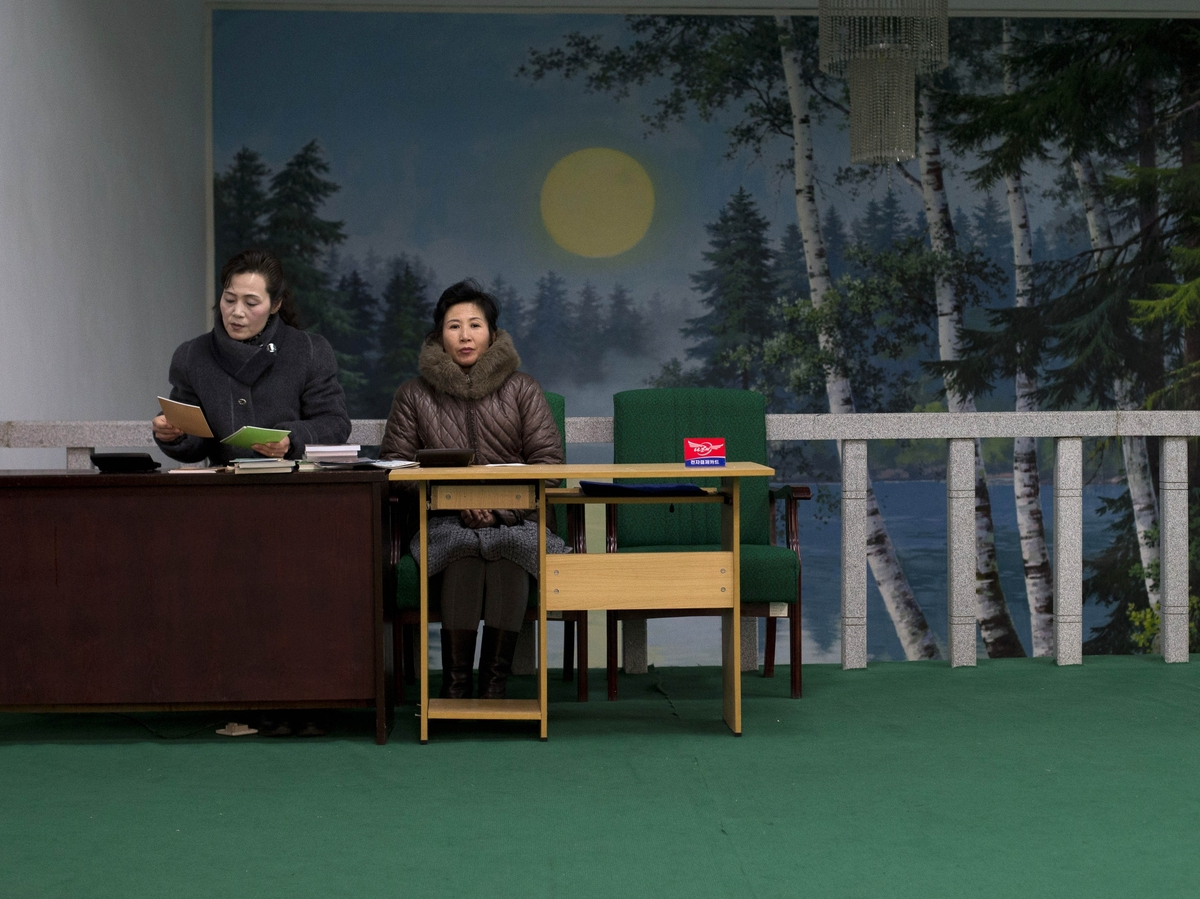 Women work at a bookstore in Pyongyang. With so many men unable to find work and support a family, more young women are willing to delay marriage.

By then, markets had sprung up illegally to keep people alive, and have thrived despite the state's numerous attempts to roll them back. The government had imposed a welter of restrictions on market activity, including forbidding anyone except older women from market trading. Those restrictions have largely been relaxed recently.

For almost half of North Korean families, private trading forms the only source of income, according to research done by American academics at the Peterson Institute for International Economics. Like Mrs. Kim, most women trade in the markets, or jangmadang.

In North Korea, Mrs. Kim gets up at 4:30 each morning to feed the animals she sells, and also brews alcohol illegally. Every minute of the day is spent figuring out how to feed her family, including an adult son and daughter whose state-run jobs do not provide enough to live on.

"If you don't go to work, you go to prison," one male interviewee tells NPR. The one escape is a system where some men, like Mrs. Kim's husband, pay between 20 to 30 times their tiny monthly salary not to work.

They make the payments in order to be classified in what are known as "August the third units," who can trade privately. It's not clear whether this practice is legal, although it is widespread. Anecdotally, the women hint that they often are the ones to decide whether their husband's skills are actually worth paying such sums of money.

'We Can Speak Louder Now'

Figures are almost impossible to come by in reclusive North Korea. Most research is conducted through interviews with defectors who have left the country, perhaps not a typical group.

But anecdotal evidence collected in interviews by Kim Seok-hyang, a professor of North Korea studies at Ewha Womans University in Seoul, indicates that women are the main breadwinners in 80 to 90 percent of households — and that is having social consequences within the family.

Back in China, Mrs. Kim of North Korea says those social changes are playing out in her own family.

"I don't know if you can call it power, but women do what men can't do, so we can speak louder now," she says. "In the past, we obeyed our husbands. But now they can't make money. Women have to make money and feed them. Women have become the heads of the family. They make the money and buy the food. Men cannot say what they want."

She admits her friends mockingly call their husbands "puppies" or "pets" because they have to be fed, yet they do nothing. The economics are telling: Mrs. Kim earns about 3,000 won a day at the market — the equivalent of less than 50 cents — at black market rates.

That's double what her husband would earn in an entire month, were he to get paid.

"I get paid 1,200 won a month," complains another interviewee, Mr. Kim, who is no relation to Mrs. Kim and who has an office job in a state-run company. "It's a joke. There's nothing you can do with that salary. A kilo of rice is something between 5,000 to 7,000 won." He was paid only six times last year, he says, but as he points out, his salary is largely meaningless.

North Korea's government has become dependent on free labor from its citizens. Each young man spends a decade in the army on compulsory military service, for which he may earn a nominal salary and dwindling food supplies. The men are then sent to a job in a state-run work unit, which — strapped for cash — doesn't necessarily pay wages any more.

"It's a place which is like a prison," says Kim Tae-jin, a former political prisoner in the North who now runs a non-governmental organization based in Seoul. "It's a system of slavery. You have to understand that your free time is not free. You are buying your own time."

The division of the two parallel economic systems along gender lines is political, according to Marcus Noland, the deputy director of the Peterson Institute for International Economics.

"It's really a function of ideology," he says. "Back in the 1990s, there was a political decision that working for the state was politically more advanced — man's work."

"That is why women were pushed out of employment in core state organizations, and that is why they ended up in the market," he adds. "Certainly, there was no intention on the part of North Korea decision-makers to raise the role of women relative to men. Just the opposite."

But now, North Korean women have a new figurehead: the fashionable wife of the young leader, Kim Jong Un, first lady Ri Sol Ju, who is rumored to be pregnant. The women I meet hope her high-profile role might translate into gains for them.

"I think it's almost 100 percent," says Ewha University's Kim Seok-hyang, who makes a point of asking defectors about domestic violence. "I interviewed more than 60 people. All of them agreed violence is there against women. Violence against women is not news for them. It's so natural, it's happening almost every day." She blames men's alienation and frustration with their diminution of power within the family for the problem.

Outside the home, in the marketplace, women are vulnerable too, says Noland. In his research of women engaged in the market, 95 percent reported paying bribes to police and officials, who would try to shake them down.

"The flip side is that more than one-third of the men we interviewed saw graft and corruption as the best way to get ahead in North Korea," Noland says. "Not only do you have a system that's highly corrupt, but you have a system that, because of its peculiar political history, that has an increasing gender dimension to it as well."

That — and being exposed to new ideas in the marketplace — could affect women's political views.

"Women, because of their prominence in the market, are at the forefront of acts of civil disobedience," Noland says, emphasizing that civil disobedience is still extremely unusual in North Korea. "The protests are generally reactive and defensive in nature, but women are very prominent in them."

The extra burden women carry is beginning to have social consequences, with young women hoping to delay marriage to avoid taking on a husband. For men, their emasculation within their own households is now a fact of life.

That muteness has become a matter of survival. Mr. Kim describes what happens to friends whose wives have left them or died: "Men without wives become beggars. They become so hungry that they can't go to work. Then they have to go to market to beg. This has happened to between five and seven men I know."

Economically, North Korea is a basket case, but these accounts indicate schisms in the social fabric, too. That life is a daily struggle is no surprise, but these previously hidden stories of suffering show North Korea hasn't lost its capacity to shock.