Accessibility links
Could Post-Superstorm Sandy Rebuilding Energize The Economy? Some economists predict that the reconstruction from the damage caused by Superstorm Sandy will produce a stimulus effect for the U.S. economy in 2013 — especially in construction and related industries. Others say the losses associated with a storm will outweigh any positive effects from the rebuilding. 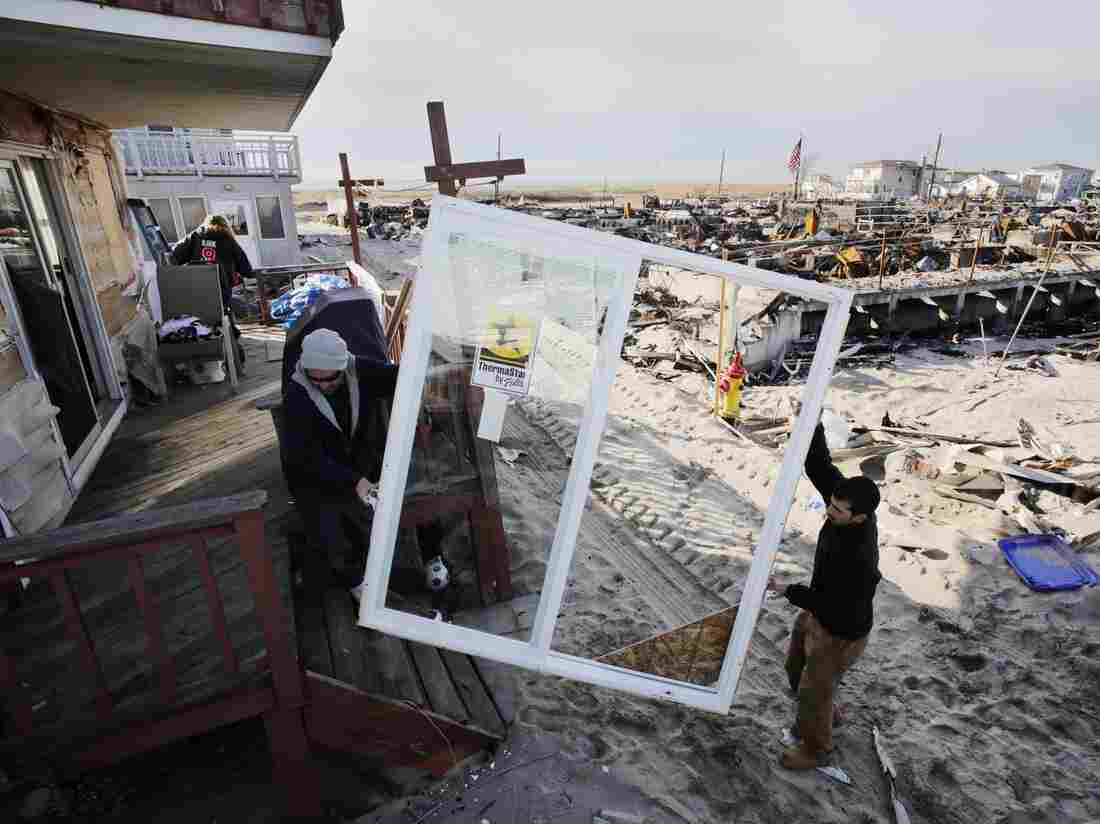 Contractors Benny Corrazo, left, and Michael Bonade install a new set of sliding glass doors in a home that survived Superstorm Sandy in the Breezy Point section of New York on Dec. 20, 2012. Some economists say that reconstruction efforts may stimulate the economy. Mark Lennihan/AP hide caption

Superstorm Sandy did tens of billions of dollars in damage to coastal areas of New York and New Jersey.

But there may be a silver lining to all that destruction: Some economists argue that reconstruction from Sandy could help stimulate the national economy in 2013. Still, others are more skeptical.

Charlie Messina uses a jackhammer to break up flood-damaged concrete in a basement in the Brooklyn neighborhood of Manhattan Beach. Messina owns a small business that does renovations.

"Well, business picked up, of course," he says. "But I'm not happy in terms of the way it picked up."

Messina says he was busy even before Superstorm Sandy devastated parts of Brooklyn, Queens and Staten Island. Now, he can barely keep up.

"I've been working seven days a week. And after-hours, 24-hour emergency service calls," he says, adding that he had been working without a break.

Messina expects to stay busy right through the spring, as more checks from insurance companies and FEMA arrive, and more homeowners start to spend on repairs. Construction contractors are in high demand from the Jersey Shore to Long Island. And some economists say all that construction activity will give a measurable boost to the U.S. economy in the coming year.

"We're going to be seeing a rather hefty net increase — net stimulus — to the economy," says Bernard Baumohl, with The Economic Outlook Group in Princeton, N.J. "Because it's going to result in more hiring. And as more people get jobs, they will have more money to spend that will benefit the entire economy."

Baumohl concedes that the economies of New York and New Jersey experienced some short-term pain after the storm. Some businesses still haven't been able to reopen because of flood damage. But he says the coming construction boom could make up for all that and more, when you factor in all the spending on commercial real estate and public infrastructure projects like bridges and tunnels.

"Not only are we talking about a repair, we're also talking about building it and fortifying these structures so that they'll be able to withstand storms of similar intensity in the future," he says.

The Sandy stimulus effect could add as much as half a percentage point to the national GDP in 2013, Baumohl says.

But economists who've studied the impact of past storms aren't so optimistic. Ari Belasen, who teaches economics at Southern Illinois University Edwardsville, looked at how the economies of Florida and the Gulf Coast rebounded after other major hurricanes.

"What it really comes down to is whether or not the one sector that benefits — construction and its supporting links — can overcome the damage to the rest of the economy," he says. "With New York and New Jersey being unable to kind of cope with this, there's no way that you can really expect any kind of immediate stimulus."

New York and New Jersey are seeking at least $60 billion in emergency federal funding, but Congress is still debating that request. Belasen says regions that have gotten substantial federal assistance in the past do see a rebound in economic growth — but it does not happen quickly.

"We've looked at really a two-year lag period after a hurricane," he says. "And you'll still see that the areas that are hit are a little bit below where they should have been."

Belasen says rebuilding from Sandy may benefit some industries at the local level, but he does not think it will have a positive net impact on the national economy. Neither does Kevin Gillen, an economist at the University of Pennsylvania's Fels Institute of Government.

"A dollar spent stimulating the reconstruction of the Jersey Shore is a dollar that has to come from somewhere else," Gillen says. "There's no telling how that dollar could've been spent otherwise stimulating the economy — investing in research and development, in hiring new people."

All the economists I talked to did agree on one thing: Prospects for economic growth in 2013 are tied directly to negotiations over the fiscal cliff. They say that matters more than any stimulus effect that does — or doesn't — come from rebuilding after Sandy.