Accessibility links
Brazil's Drug Epidemic: Welcome To 'Crackland' Crack has been in Brazil since the 1990s, but the drug has exploded in the past six years. The government has poured billions into a prevention and treatment program, but officials are still trying to figure out the best way to combat the epidemic. 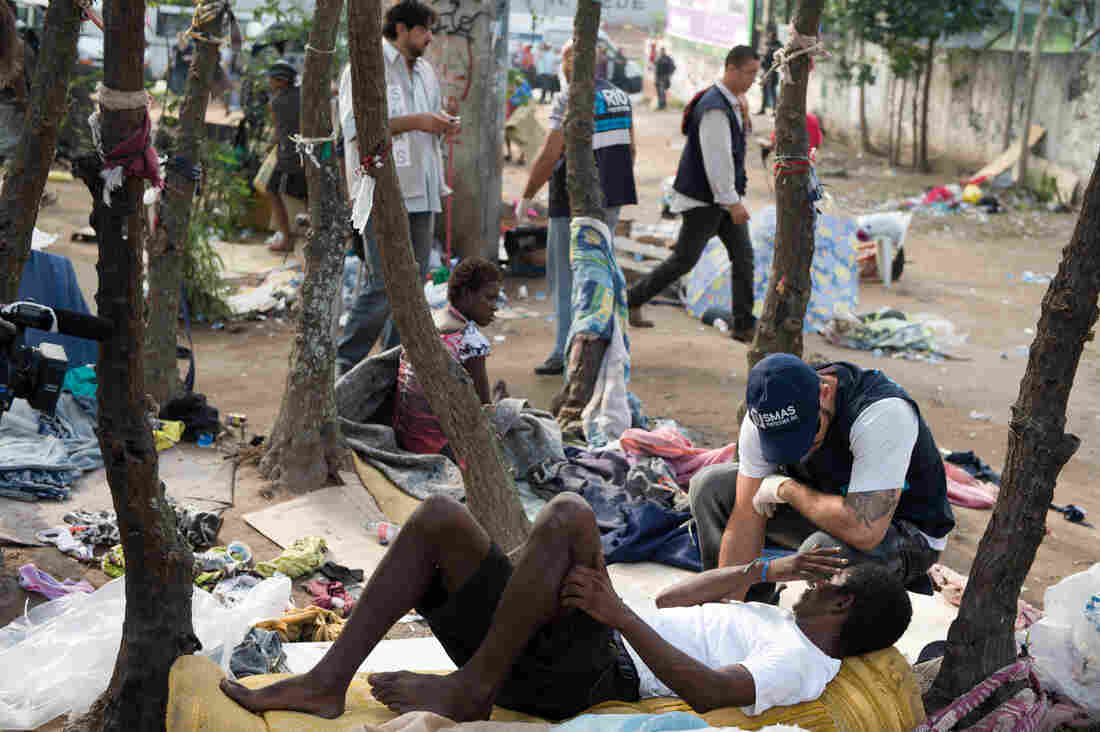 A member of Rio de Janeiro's Social Work Department speaks with crack addicts in a slum area known as "Crackland," during a police operation in the city in November. Christophe Simon /AFP/Getty Images hide caption 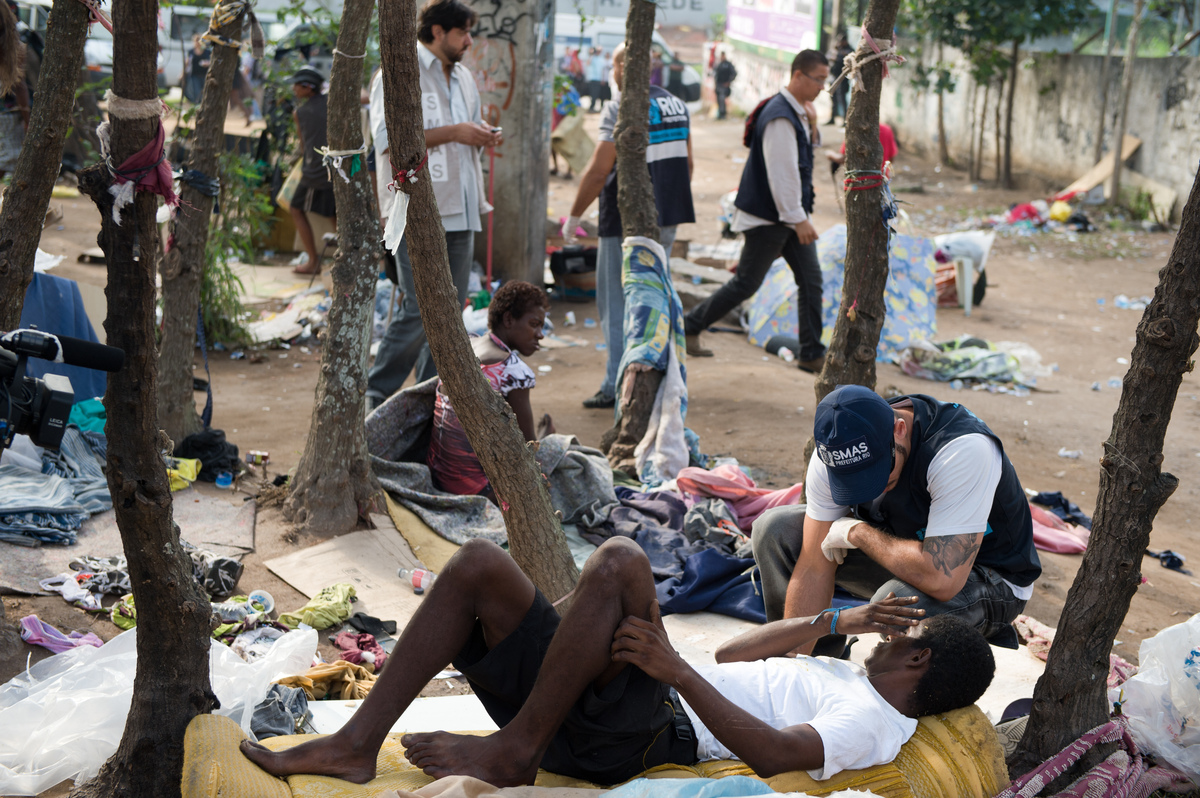 A member of Rio de Janeiro's Social Work Department speaks with crack addicts in a slum area known as "Crackland," during a police operation in the city in November.

Brazilian health officials say an epidemic is taking hold — an outbreak of crack cocaine use nationwide, from the major cities on the coast to places deep in the Amazon.

It's an image at odds with the one Brazil wants to project as the country prepares to host soccer's World Cup in 2014 and the Summer Olympics two years later. But the problem has become too big to ignore.

The Luz district of central Sao Paulo was once grand, with its old train station and opulent buildings. Now, this neighborhood is known as Cracolandia — Crackland.

On a recent night, skeletal figures in tattered, dirty clothes emerge — mostly men, but some women. They're glassy eyed and jumpy, and looking for a quick fix, oblivious to the police helicopters overhead.

The only buffer between them and the rest of society this evening is Isabel Campos, a health worker who tries to convince addicts to seek help.

"They're here all day," she says, "smoking crack." 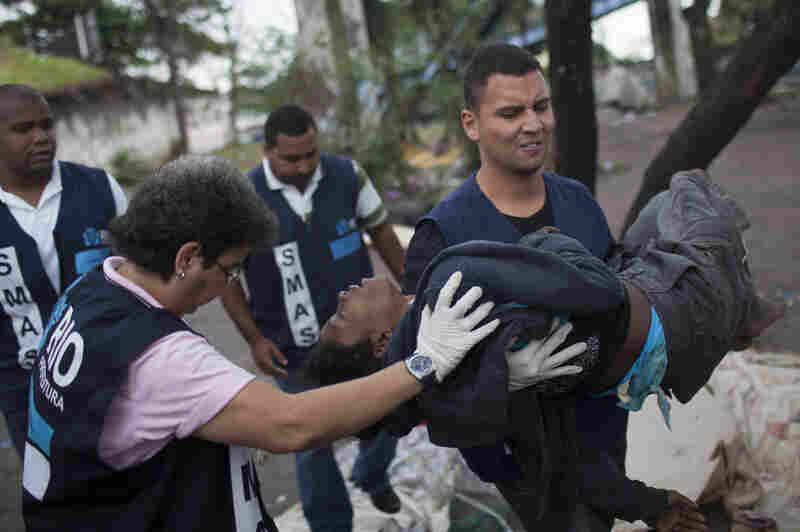 A suspected crack user is voluntarily removed from a local "Crackland" and carried by a social worker to a waiting van that will take her to a nearby shelter in Rio de Janeiro in November. Felipe Dana/AP hide caption 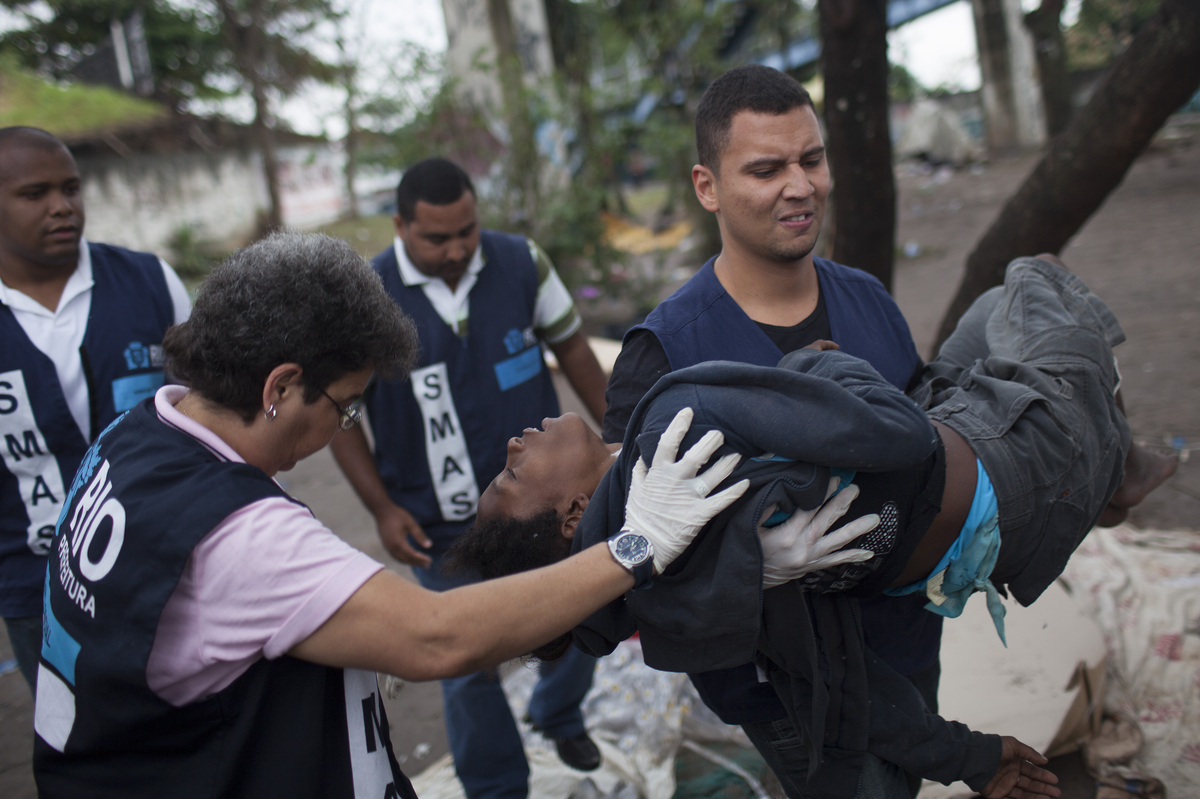 A suspected crack user is voluntarily removed from a local "Crackland" and carried by a social worker to a waiting van that will take her to a nearby shelter in Rio de Janeiro in November.

Origins Of The Problem

Crack has been in Brazil since the 1990s, but its use exploded in the past six years, according to health and police officials. The reasons, they say, are proximity and porosity.

Brazil is a neighbor to the world's biggest cocaine-producing countries, and its borders are vast, remote and largely unguarded.

Eloisa Arruda, the secretary of justice for Sao Paulo state, says the market is alluring.

She says the problem is similar to the crack crisis in the United States in the 1980s, when the drug engulfed cities and generated waves of violence.

"It's a big growth of people using crack in public," Arruda says. "People permanently in the street consuming drugs day and night."

The Brazilian approach has been to treat the problem as a health care crisis.
President Dilma Rousseff responded with a $2 billion drug prevention and treatment program.

In Sao Paulo, addicts are urged to seek help at Psychosocial Attention Centers — 80 clinics where addicts can receive a bed for the night. 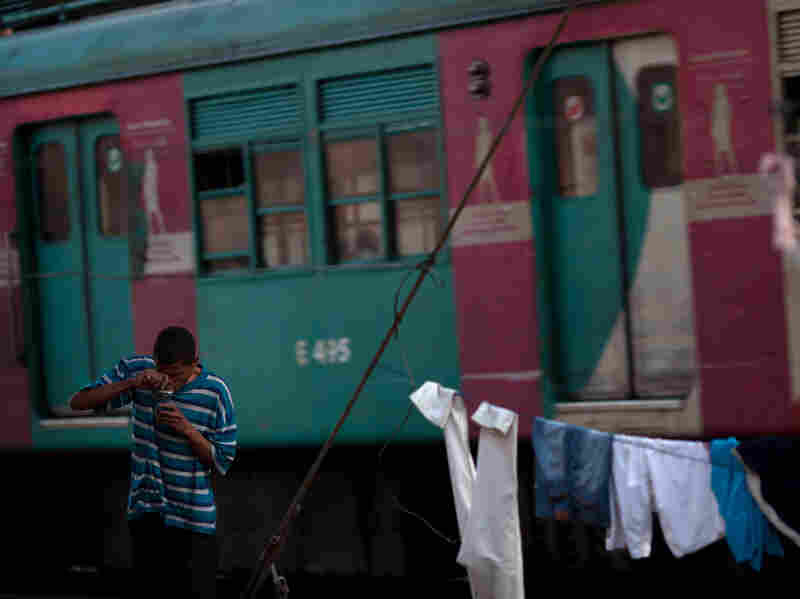 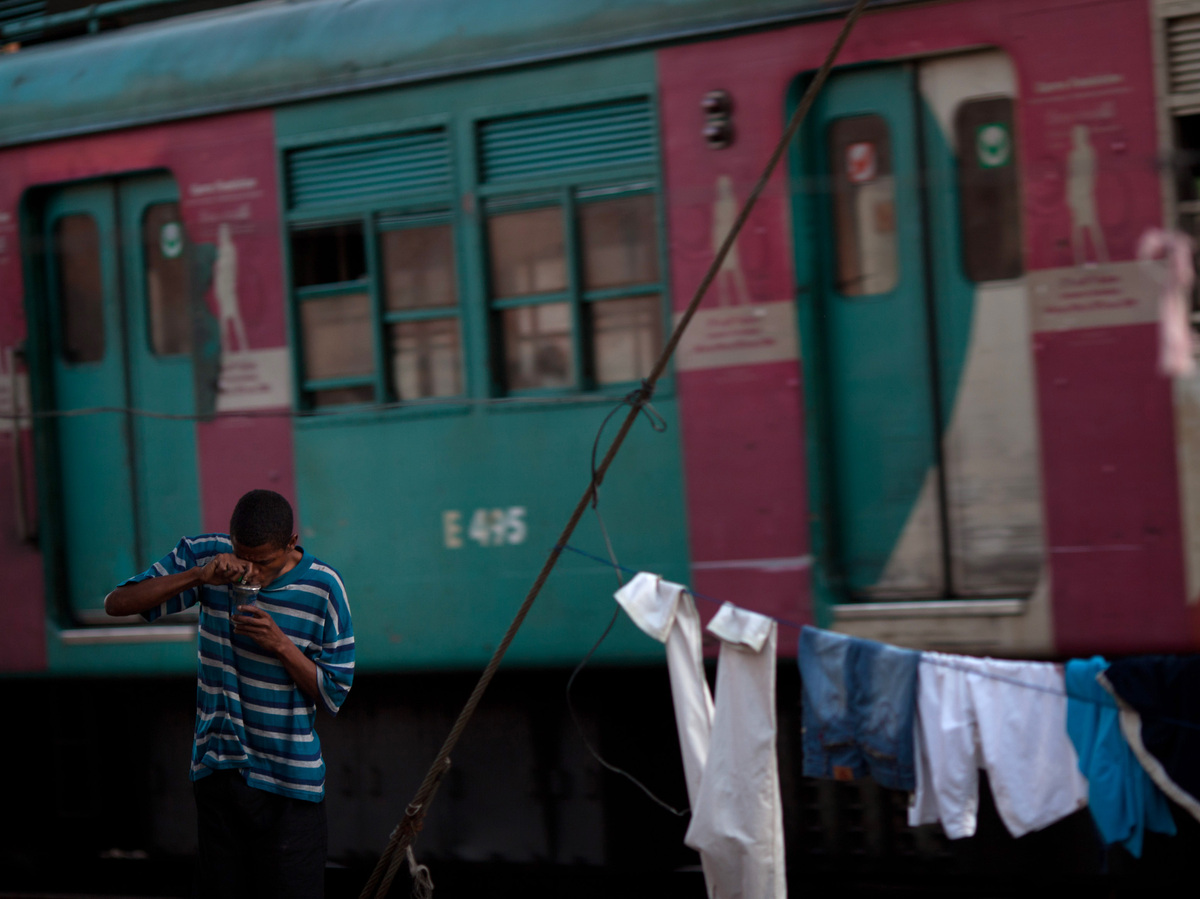 A man smokes crack near the Manguinhos slum in Rio de Janeiro in August.

On a recent day, a group of crack users gathers at one center to watch a documentary and talk about drugs and society. A female addict says the real enemy is the state. She rattles off how low wages are in Brazil, how education is shoddy and opportunities scant.

Antonio Sergio Goncalves offers another reason. He's a psychoanalyst and has worked with addicts for 27 years. It's the well-organized distribution of crack, he says, which can be found in most cities. And then there's also crack's powerful addictive qualities.

"You feel instant ecstasy," says Marcelo Cordeiro, a crack addict. "The only thing is the depression that comes when you don't have it."

Cordeiro says crack is so much more intense than cocaine, but dangerous. He calls it euphoria, with morbidity.

It's a euphoria that the addicts in Sao Paulo's Cracolandia crave. One of them is Paulino, who won't give his last name. He's 50, very skinny, energetic and musically inclined, playing the harmonica. He also uses crack every day.

"I'm chemically dependent," he says. "I need crack in my blood."

He says that his illness is like a snake. What's the medicine for a snake?

He says it's venom — crack.