Accessibility links
How Good Is The World's Most Expensive Fighter Jet? The F-35 Joint Strike Fighter is the newest fighter plane set to enter the U.S. arsenal. The versatile, high-tech jet is supposed to help three military branches modernize their aging fleet of aircraft. It's in the skies now, but is still dogged with technical problems and questions about its high price tag. 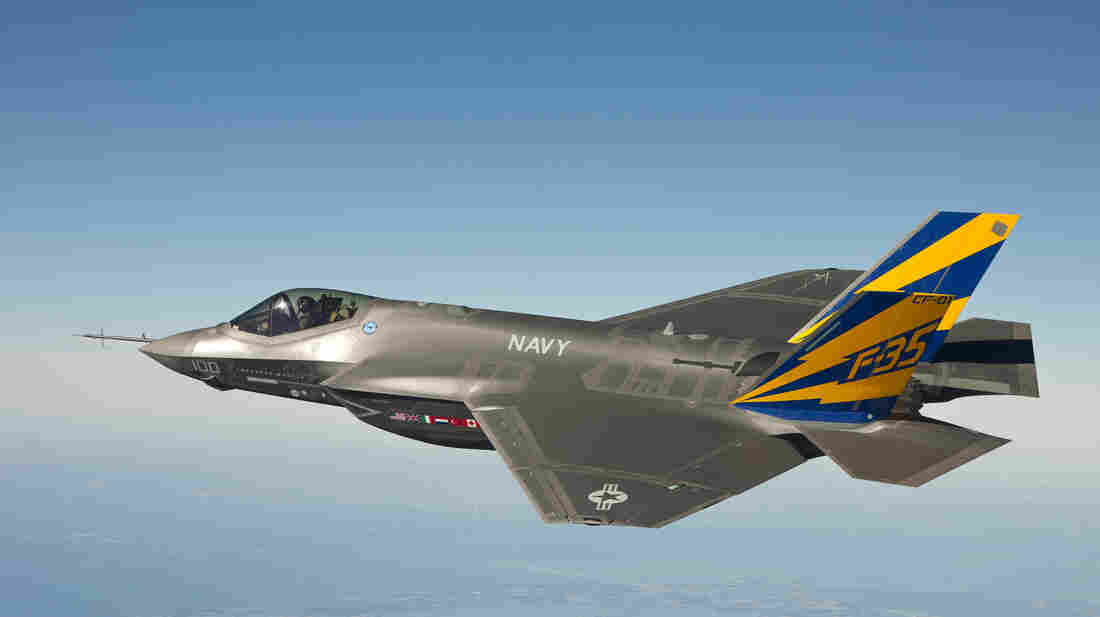 The U.S. Navy version of the F-35 Joint Strike Fighter conducts a test flight on Feb. 11, 2011, over the Chesapeake Bay in Maryland. The F-35 is the fighter jet of the future for the U.S. military, but its high cost and many delays have raised questions. U.S. Navy/Lockheed Martin/Getty Images hide caption

After years on the drawing boards and in testing labs, a new fighter plane is entering the U.S. arsenal. The F-35 Joint Strike Fighter is supposed to help the Air Force, the Navy and the Marines replace their fleet of aging aircraft.

But this plane has become the most expensive military procurement program in history. While critics continue to carp about the cost, the plane is now in the skies, and the military says it's the lynchpin for future defense strategies.

On a cold fall morning at Eglin Air Force Base near Pensacola, Fla., Air Force Lt. Col. Lee Kloos watches a fellow pilot prepare an F-35 for launch. Kloos loves the technology — from the advanced helmet that lets him see in the dark, to the stealth technology that lets him hide from radar.

Some of that stealth design is built right into the smooth shape of the plane.

"When he closes his weapons bay doors, everything is going to clean up really nicely on this jet, whereas compared down there to the F-16, he's hanging external tanks, and of course, if he had weapons, he'd be hanging external weapons all over the aircraft," says Kloos. "So, [the F-35 is] a very clean, slick jet to fly."

Weapons and fuel are kept in internal bays, so there are no sharp edges or bumps that will show up on radar. The military says stealth is key to dealing with future threats, and to staying ahead of the Chinese and the Russians.

For years, pilots like Kloos have relied on the unstealthy F-16, the workhorse of the fighter fleet. But the F-16 is long in the tooth, and the U.S. has not bought any new copies for years. So the F-35 is supposed to pick up its mission: enforcing no-fly zones, or supporting special ops teams.

But despite its sleek profile, the F-35 is loaded down with problems.

In a control room, pilots in green jumpsuits check on the weather near Eglin. The military is eager to show off this plane, to show that it's not just a flying money pit. But even though the F-35 is in the air, it still faces years of testing before it can go into battle.

Maj. Matt Johnson explains that his pilots are still working on the instruction manual.

"We know how we think the jet should take off, what we've seen from developmental tests," he says. "But what we're trying to do is codify that and put it in writing, and write those publications that in previous jets were already written by the time you get to training. Well, we're doing that here."

Thanks to a strategy known as "concurrency," the F-35 is being flown and tested at the same time. Concurrency was supposed to speed up the F-35's development. But the jet is years late. Lockheed has been locked in arguments with the Pentagon over who should pay for the fixes that are needed as test pilots work out the kinks.

A big selling point for this plane is that it's supposed to satisfy pilots from the Air Force, the Marines and the Navy. They've all relied on a roster of up to 10 aircraft to land on carriers, do aerial combat, and conduct surveillance.

Maj. Adam Levine says for Marine fliers like himself, the F-35 is supposed to replace three different planes: the F/A-18 Hornet, the AV-8B Harrier, and the EA-6B Prowler jamming airplane currently employed by the Marines Corps.

But to do that, manufacturer Lockheed had to mess with the sleek shape of this plane and add a special feature. The Marine version sports a noticeable bump behind the cockpit; that's the home of a powerful fan.

The fan, Levine explains, provides the thrust and lift needed for the aircraft to perform short takeoffs and vertical landings.

Vertical landings let the jet land like a helicopter, and let it take off on short runways, critical functions for the Marines. But that bump also makes the plane less stealthy, and it has added greatly to the cost.

The Marine version of the plane costs more than $160 million, nearly one-third more expensive than the Air Force variant, which costs nearly $130 million. And trying to hide a tailhook for carrier landings inside the Navy version has also been a problem.

Lt. Col. Todd LaFortune walks away from his plane after a training run. He is still wearing his pressure suit and is a little flushed from his flight. LaFortune is now qualified to be an F-35 instructor. He'll never fly an old F-16 again.

"We decided once you start flying the F-35 we're not going to be dual-qualified. So now, I should be done with the F-16 for the rest of my life," he says. "That was a sad day, but it's one of the coolest things I've ever done in my life, was being selected to come fly this aircraft and then get to actually fly it now. It's pretty neat."

That transition is emblematic of what the military is going through. At Eglin, they are building everything from new training facilities to maintenance hangars to prepare for their share of the more than 2,000 F-35s the U.S. military plans to buy. The Pentagon is wedded to this plane, despite cries from many that the Joint Strike Fighter will break the bank, and steal money from the rest of the defense budget.