Accessibility links
'Stand Your Ground' Linked To Increase In Homicides A controversial self-defense statute appears to produce more killings, according to a new study. Advocates for the law say it's working as designed. But researchers have different explanations about what might be happening. 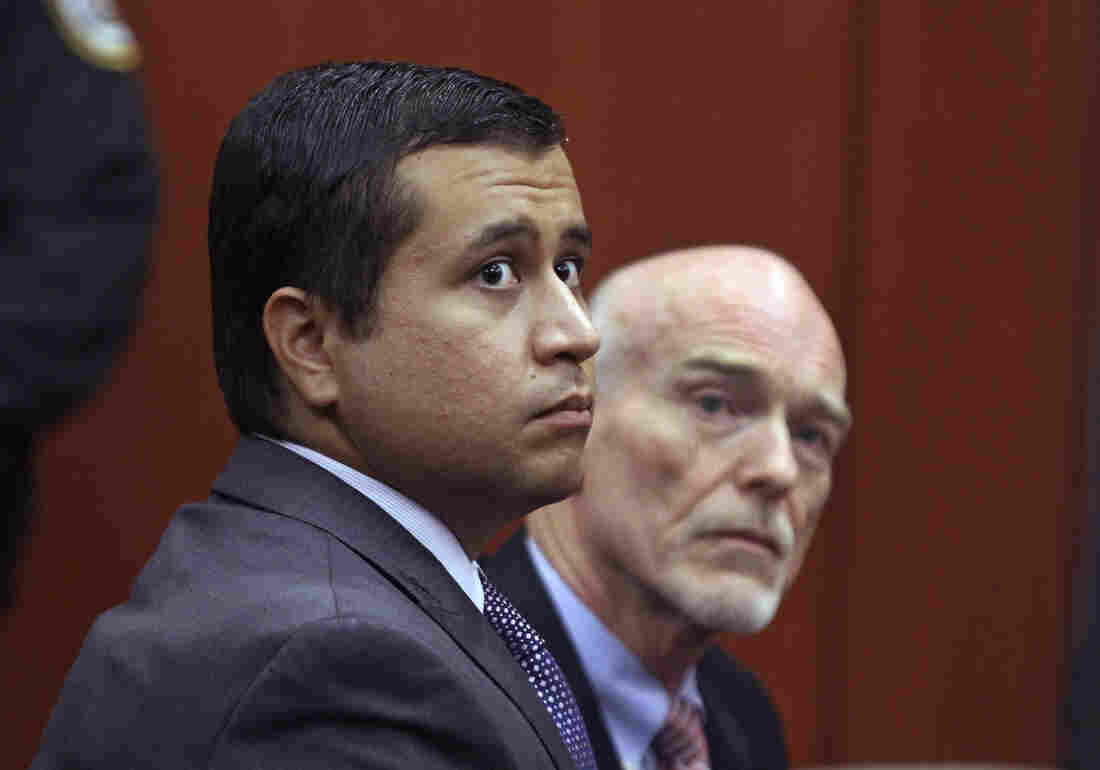 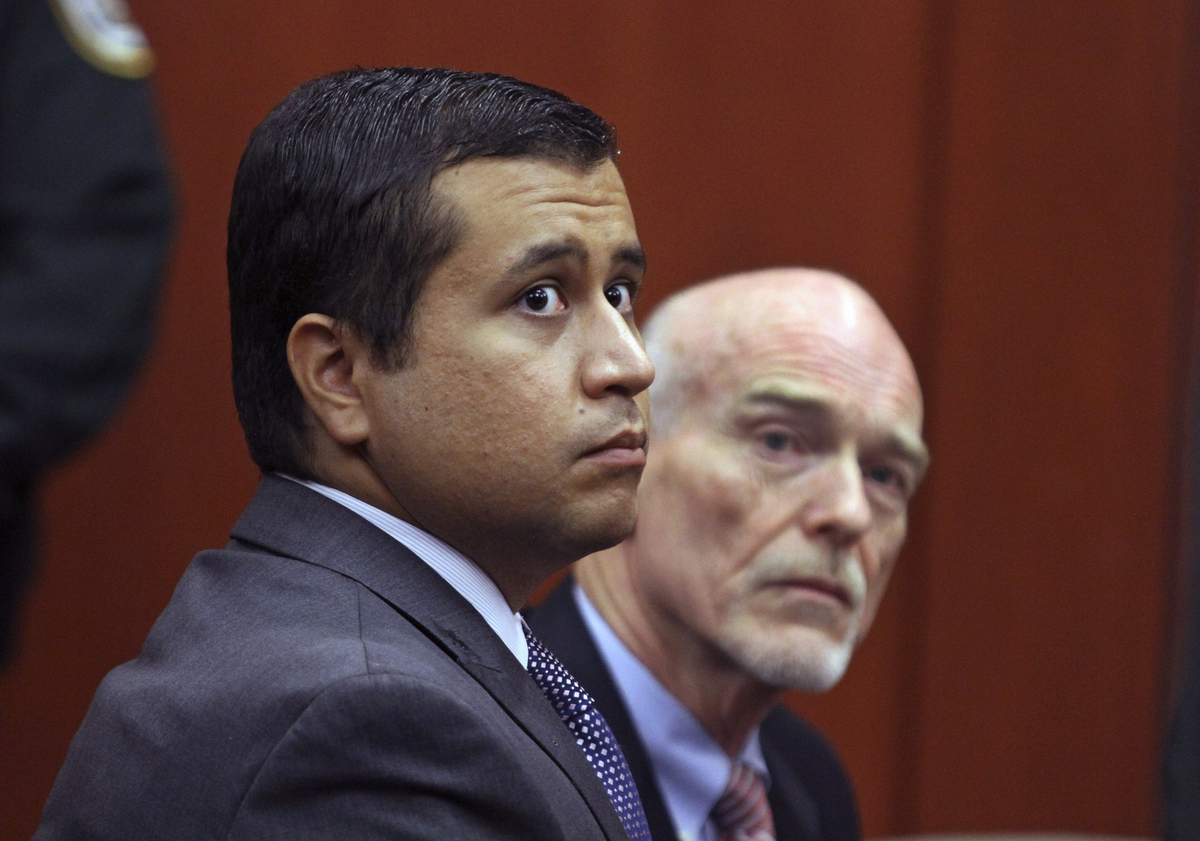 George Zimmerman (left) and his attorney appear in court for a bond hearing in June. Zimmerman's case sparked a nationwide debate about so-called "stand your ground" laws.

If a stranger attacks you inside your own home, the law has always permitted you to defend yourself. On the other hand, if an altercation breaks out in public, the law requires you to try to retreat. At least, that's what it used to do.

In 2005, Florida became the first of nearly two-dozen states to pass a "stand your ground" law that removed the requirement to retreat. If you felt at risk of harm in a park or on the street, you could use lethal force to defend yourself. The shooting of unarmed 17-year-old Trayvon Martin in Sanford, Fla., drew national attention to these laws.

Now, researchers who've studied the effect of the laws have found that states with a stand your ground law have more homicides than states without such laws.

"These laws lower the cost of using lethal force," says Mark Hoekstra, an economist with Texas A&M University who examined stand your ground laws. "Our study finds that, as a result, you get more of it."

Advocates for the laws, like Republican state Rep. Dennis Baxley, who sponsored Florida's version, says such legislation allows good people to defend themselves.

"They're doing what they are supposed to do, as a good citizen," he says. "They're stopping a violent act. And that's what I want the statute to do at the end of the day."

Marion Hammer, a former president of the National Rifle Association, said the laws have been effective and are working exactly as designed. A committee analyzing the Florida statute has found no increase in violence as a result of the law.

Because murder is a rare phenomenon, the numbers in any given state can be hard to analyze. It can be difficult, for example, to disentangle the effects of stand your ground statutes from other trends, such as natural fluctuations in the crime rate. Until now, there has been little attempt to rigorously study these laws at a national level.

This chart, based on data provided by Texas A&M researcher Mark Hoekstra, compares homicide rates in states that have stand your ground laws with homicide trends in states that don't have the laws. The vertical y-axis represents an adjusted homicide rate that takes into account a state's population, pre-existing crime trends and other factors.

To learn more about the data that went into this graph, please see this study (PDF).

Hoekstra recently decided to analyze national crime statistics to see what happens in states that pass stand your ground laws. He found the laws are having a measurable effect on the homicide rate.

As to whether the laws reduce crime — by creating a deterrence for criminals — he says, "we find no evidence of any deterrence effect over that same time period."

Hoekstra obtained this result by comparing the homicide rate in states before and after they passed the laws. He also compared states with the laws to states without the laws.

"We find that there are 500 to 700 more homicides per year across the 23 states as a result of the laws," he said. There are about 14,000 homicides annually in the United States as a whole.

The fact that more people are being killed doesn't automatically mean the law isn't working. Hoekstra says there are at least three possible explanations.

But which is it?

Hoekstra checked to see whether police were listing more cases as "justifiable homicides" in states that passed stand your ground laws. If there were more self-defense killings, this number should have gone up. He also examined whether more criminals were showing up armed.

In both cases, he found nothing. There were small increases in both numbers, but it was hard to tell whether there was really any difference.

So if the numbers on justifiable homicide and criminals using lethal force don't explain the rise in homicide, what's causing the increase?

"One possibility for the increase in homicide is that perhaps [in cases where] there would have been a fistfight ... now, because of stand your ground laws, it's possible that those escalate into something much more violent and lethal," says Hoekstra.

It's important to remember that the data Hoekstra is analyzing depend on how police classify shootings. Police guidelines likely vary from state to state, and police in different places may be interpreting shootings differently in light of stand your ground laws.

Still, based on the available data, it appears that crafters of these laws sought to give good guys more latitude to defend themselves against bad guys. But what Hoekstra's data suggest is that in real-life conflicts, both sides think of the other guy as the bad guy. Both believe the law gives them the right to shoot.

In a separate analysis of death certificates before and after stand your ground laws were passed in different states, economists at Georgia State University also found that states that passed the laws ended up with a higher homicide rate.

That study also tracked the increased homicides by race. In contrast to the narrative established by the Trayvon Martin shooting — many people believe black men are more likely to be the victims of stand your ground laws — this analysis found the additional deaths caused by the laws were largely concentrated among white men.

The NRA, which has backed these laws, referred a request for comment to Howard Nemerov, a gun-rights activist who often represents the NRA viewpoint on television. Nemerov offered a technical analysis, which has not been reviewed by academic experts, in which he said concerns about the law were flawed.

Stanford law professor John Donohue, on the other hand, praised the study done by Texas A&M's Hoekstra. Donohue has been studying crime and violence for more than two decades and is working on his own independent analysis of stand your ground laws. So far, he says, he's getting the same results Hoekstra did.

"The imperfect but growing evidence seems to suggest that the consequences of adopting stand your ground laws are pernicious, in that they may lead to a greater number of homicides — thus going against the notion that they are serving some sort of protective function for society," he says.

And in murder cases, Donohue says, the laws might end up being a refuge for some defendants.

"I've been hearing from defense lawyers around the country that if they happen to have a criminal defendant in a stand your ground jurisdiction, pretty much no matter what happens, you can say, 'Well, I shot the guy, but I felt threatened and had a reasonable basis for fearing injury to myself,' " he said.