Accessibility links
The Tony Soprano Of Karachi: Gangster Or Politician? Gangsters in Karachi are a little different from the American variety. They often control armed groups linked to political parties. Uzair Baloch is known as the don of Karachi's Lyari slum. But ask him if he's a gangster, and he'll laugh. He says he's a politician and a social worker. 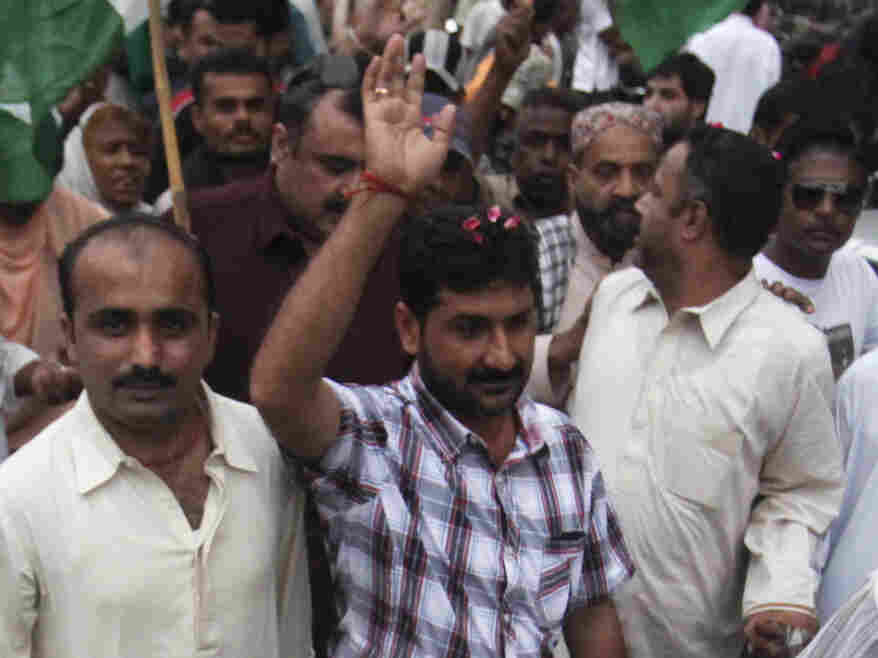 Uzair Baloch (center), 32, controls an impoverished section of Karachi and commands a large armed force. He is routinely described as a gangster, though he calls himself a politician and a social worker. He's shown here at a rally in Karachi in November 2011. Akhtar Soomro/Reuters/Landov hide caption 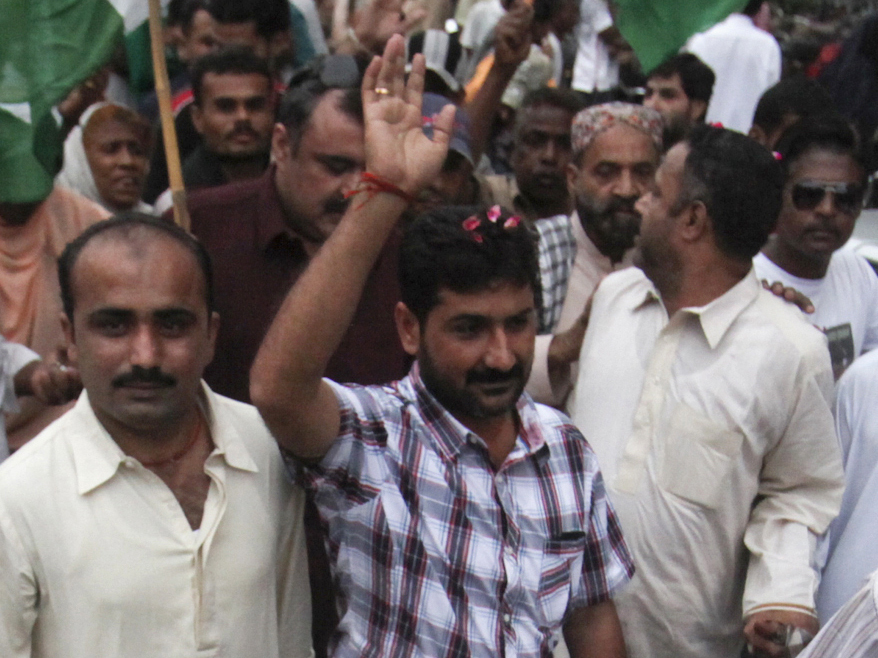 Uzair Baloch (center), 32, controls an impoverished section of Karachi and commands a large armed force. He is routinely described as a gangster, though he calls himself a politician and a social worker. He's shown here at a rally in Karachi in November 2011.

Gangsters have been part of life in Karachi, Pakistan's largest city, for decades. And nowhere is their rule more notorious than in the slums of Lyari, a dusty warren of low-slung tenement houses in the south central part of Karachi.

And in Pakistan, they are a little different from the American variety. They are part Tony Soprano — with the attendant extortion schemes and kickbacks and armed enforcers — but they are also, in a sense, politicians closely aligned to the various political parties. So when the leading such figure in Lyari speaks, it is with both the vocabulary and the sensibility of a politician.

"The people here in Lyari support us," says Uzair Baloch, 32. "It is the people outside who are trying to give me a bad reputation. They call me a gangster, but they have this wrong. I'm a politician. I'm a social worker."

He says all this with a smile, but he's only being slightly ironic. Every party in Pakistan has an armed wing, and gangster-politicians run them.

"When he says he's a social worker, to an extent he's right," says Zohra Yusuf, the head of the Human Rights Commission of Pakistan. "These groups do provide for the community. If the electric supply is bothering them, or residents need help, they go to Uzair Baloch rather than anyone else. The government hasn't provided services for people in Lyari for years."

Baloch is charismatic and quick to laugh. He lives off one of the dusty main drags in Lyari, and it is easy to know when one has arrived there: There are literally two-dozen guards with AK-47s outside his house. Some of them are so young they don't look like they have learned to shave yet. Others are 30-somethings who sit on couches in the front hall, armed to the teeth.

Once inside the house, the mood changes from noisy slum to moneyed tranquility. The doors open into an enormous game room with an indoor lap pool, and a six-foot flat-screen television and hand-painted murals of beach scenes on the walls. A fish tank is embedded in a step leading out to the garden. It is filled with Japanese koi. 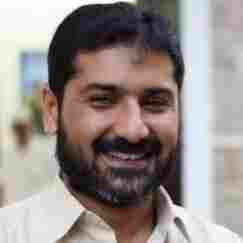 Baloch has been the most powerful figure in Karachi's Lyari neighborhood since 2009. His armed men control the area, and police stay away. He's shown here at his home. Dina Temple-Raston hide caption

Baloch has a big Rolex watch on his wrist and a scar on his hand that looks like someone tried to chop it off with an axe and nearly succeeded. At first, he says he got the scar doing construction on the house. Even he finds the story unconvincing and quickly says he got it running away from the police, and laughs. He then says he was sliding down a rope and tore open his hand. He considers another story and then just shrugs.

The armed wings of Pakistan's political parties have gentle-sounding names, and they are run by people like Baloch. His group is called the People's Peace Committee, and it has traditionally aligned with the ruling Pakistan People's Party, or PPP, although recently there has been talk of divisions.

To the PPP, he provides votes. To the people of Lyari, he provides schools, hospital services and food stamps. In return, he gets unquestioned loyalty.

Baloch and his men control Lyari Town so completely, the police no longer go into it. The last time they tried, in April, they were met with a hail of bullets. The Lyari operation went on for days before the police returned to their posts.

"It was a disaster," says Yusuf of the Pakistan Human Rights Commission. The police were completely out-gunned, she says, and Baloch's men "even managed to destroy an armored personnel carrier and kill a soldier who was there."

I ask him why people call him a gangster, and he smiles.

"People have only been calling me a gangster and a terrorist for the last three years," he says, "ever since we started standing up for the people of Lyari and asking for things. It is all politics. They are trying to ruin my reputation."

Actually, people started calling him a gangster when he rose to the top of the People's Peace Committee in 2009. He replaced a notorious Pakistani gangster named Raymon Decaid.

Police lured Decaid out of Lyari in 2009. He was quickly arrested and was shot and killed while in police custody. Baloch was next in line.

When asked about warrants for his arrest, he says, "That's the way it works in Pakistan. The charges mean nothing."

The police say it is more than that. A court in Karachi issued a warrant for Baloch's arrest on Dec. 25. The charges range from cheating on taxes to murder. There was another warrant issued earlier in 2012, and it was later withdrawn. So far the authorities have not tried to go into Lyari to arrest him.

"You know, these guys are supposed to be on the wanted list by the police, and no one arrests them," says Yusuf. "And yet they are able to give interviews to journalists."

As we prepare to leave, Baloch is joined by another visitor. He is the city government's top man in Lyari Town, the local administrator. He says he's there to discuss development projects with Baloch.