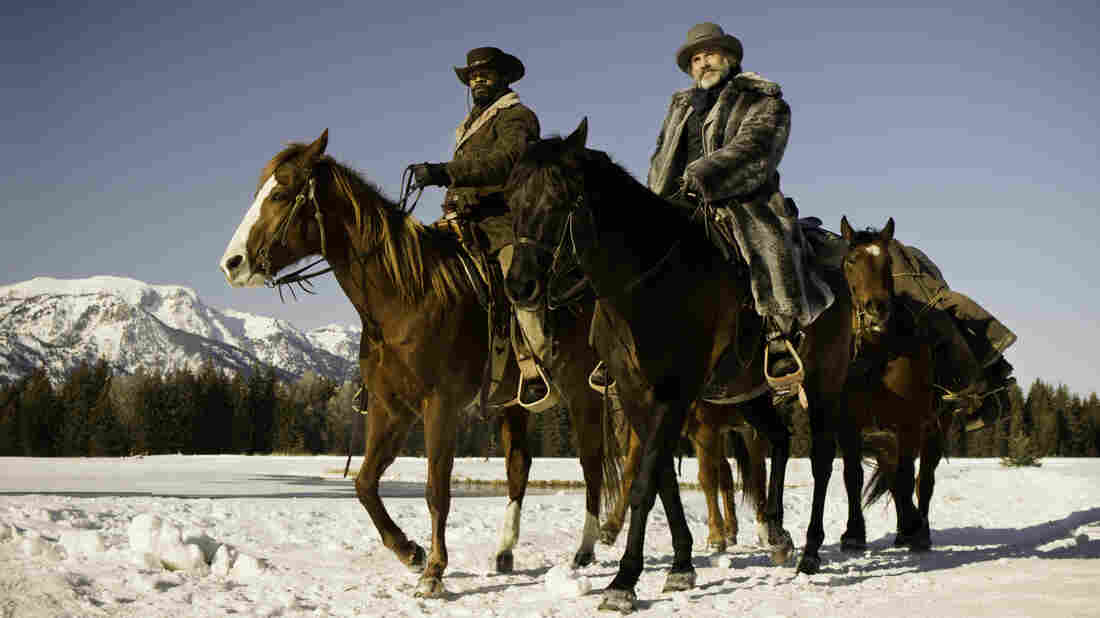 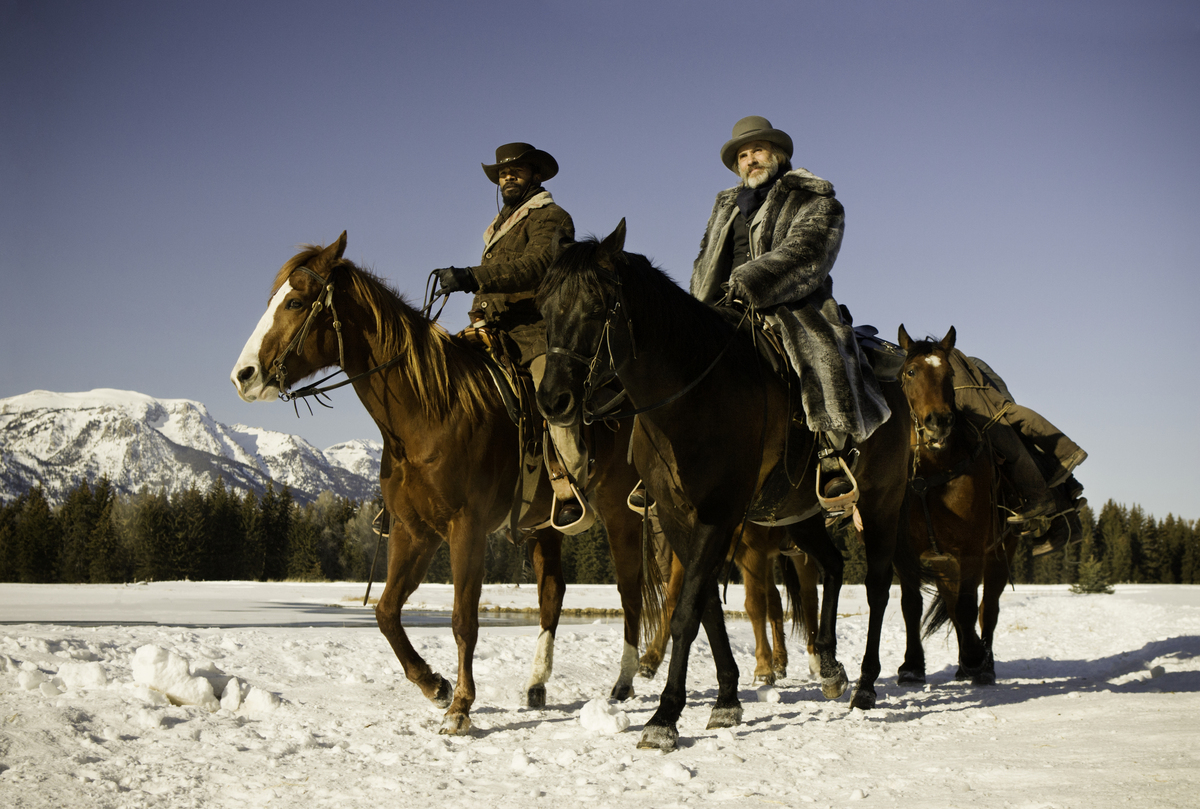 Quentin Tarantino's film Django Unchained is a spaghetti western-inspired revenge film set in the antebellum South; it's about a former slave who teams up with a bounty hunter to target the plantation owner who owns his wife.

The cinematic violence that has come to characterize Tarantino's work as a screenwriter and director — from Reservoir Dogs at the start of his career in 1992 to 2009's Inglourious Basterds -- is front and center again in Django. And he's making no apologies. 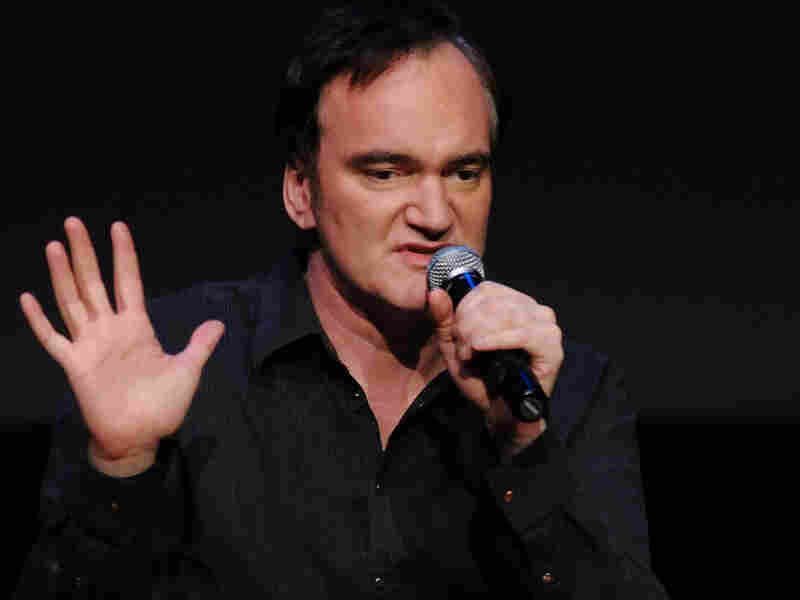 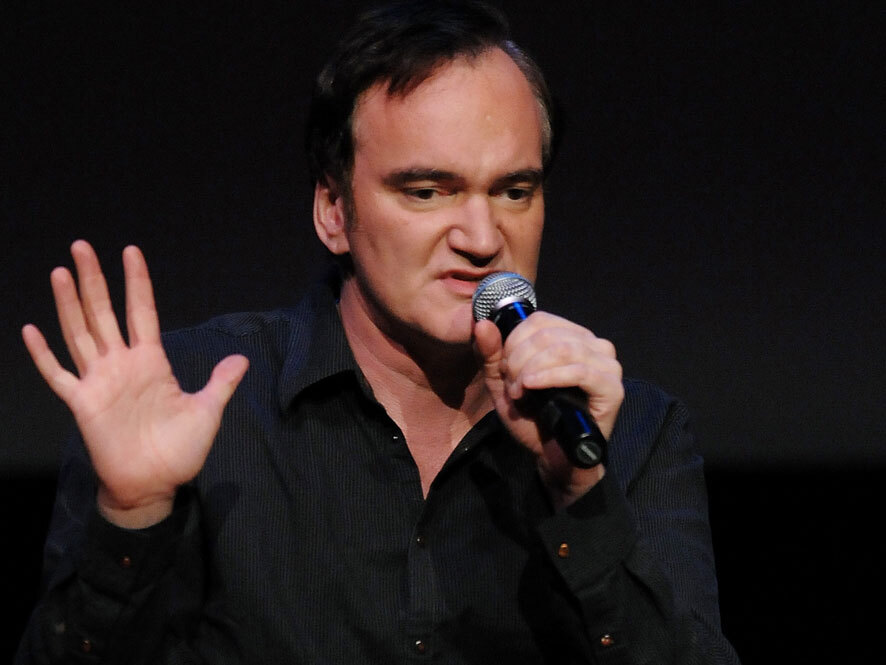 Writer-director Quentin Tarantino, seen here at a 2009 screening of Inglourious Basterds, tells Terry Gross that the only film violence that truly disturbs him involves actual harm to animals.

"Now, I wasn't trying to do a Schindler's List you-are-there-under-the-barbed-wire-of-Auschwitz. I wanted the film to be more entertaining than that. ... But there's two types of violence in this film: There's the brutal reality that slaves lived under for ... 245 years, and then there's the violence of Django's retribution. And that's movie violence, and that's fun and that's cool, and that's really enjoyable and kind of what you're waiting for."

That said, Tarantino is clear about what — for him — is acceptable violence in a movie and what crosses a line.

"The only thing that I've ever watched in a movie that I wished I'd never seen is real-life animal death or real-life insect death in a movie. That's absolutely, positively where I draw the line. And a lot of European and Asian movies do that, and we even did that in America for a little bit of time. ... I don't like seeing animals murdered on screen. Movies are about make-believe. ... I don't think there's any place in a movie for real death."

In the case of Django, Tarantino tells Fresh Air host Terry Gross that he was much more uncomfortable with the prospect of writing the language of white supremacists and directing African-Americans in scenes depicting slavery on American soil than he was about any physical violence being portrayed. His anxiety about directing the slavery scenes was so great, in fact, that he considered shooting abroad.

"I actually went out after I finished the script ... with Sidney Poitier for dinner," he says. "And was telling him about my story, and then telling him about my trepidation and my little plan of how I was going to get past it, and he said, ... 'Quentin, I don't think you should do that. ... What you're just telling me is you're a little afraid of your own movie, and you just need to get over that. If you're going to tell this story, you need to not be afraid of it. You need to do it. Everyone gets it. Everyone knows what's going on. We're making a movie. They get it.'"

On the catchphrase 'The D is silent'

"I thought everyone would know how to say the name 'Django.' Even if it wasn't from the spaghetti westerns, at least from Django Reinhardt you would know how to say it. And people would read the script [and say], 'Oh! D-jango Unchained. OK!" And people would say it all the time. Frankly, I considered it an intelligence test. If you say D-jango you're definitely going down in my book."

On conventional slave narratives on screen

"There haven't been that many slave narratives in the last 40 years of cinema, and usually when there are, they're usually done on television, and for the most part ... they're historical movies, like history with a capital H. Basically, 'This happened, then this happened, then that happened, then this happened.' And that can be fine, well enough, but for the most part they keep you at arm's length dramatically. Because also there is this kind of level of good taste that they're trying to deal with ... and frankly oftentimes they just feel like dusty textbooks just barely dramatized."

On giving an enslaved character a heroic journey

"I like the idea of telling these stories and taking stories that oftentimes — if played out in the way that they're normally played out — just end up becoming soul-deadening, because you're just watching victimization all the time. And now you get a chance to put a spin on it and actually take a slave character and give him a heroic journey, make him heroic, make him give his payback, and actually show this epic journey and give it the kind of folkloric tale that it deserves — the kind of grand-opera stage it deserves."

"One of the things that's interesting about Westerns in particular is [that] there's no other genre that reflects the decade that they were made or the morals and the feelings of Americans during that decade [more] than Westerns. Westerns are always a magnifying glass as far as that's concerned.

"The Westerns of the '50s definitely have an Eisenhower, birth of suburbia and plentiful times aspect to them. America started little by little catching up with its racist past by the '50s, at the very, very beginning of [that decade], and that started being reflected in Westerns. Consequently, the late '60s have a very Vietnam vibe to the Westerns, leading into the '70s. And by the mid-'70s, you know, most of the Westerns literally could be called 'Watergate Westerns,' because it was about disillusionment and tearing down the myths that we have spent so much time building up."

On his early introductions to African-American culture

"[My mother's] boyfriends would come over, and they'd ... take me to blaxploitation movies, trying to, you know, get me to like them and buy me footballs and stuff, and ... my mom and her friends would take me to cool bars and stuff, where they'd be playing cool, live rhythm-and-blues music ... and I'd be drinking ... Shirley Temples — I think I called them James Bond because I didn't like the name Shirley Temples — and eat Mexican food ... while Jimmy Soul and a cool band would be, you know, playing in some lava lounge-y kind of '70s cocktail lounge. It was really cool. It made me grow up in a real big way. When I would hang around with kids I'd think they were really childish. I used to hang around with really groovy adults."