Accessibility links
On Multiple Fronts, Russian Jews Reshape Israel The former Soviet citizens who flooded into Israel two decades ago have changed the country's demographics, helped strengthen the economy and played a significant role in the general rightward shift of the Israeli electorate.

Many signs are in the Cyrillic alphabet. The men and women sitting in the cafes are speaking Russian. The shops sell vodka, black bread, pickled herring and Russian-brewed Baltika beer. You have to pinch yourself to remember where you are.

This scene, with all its echoes of the former Soviet Union, is not in St. Petersburg or Vladivostok, or anywhere else in that vast sweep of bleak northern lands. It is in Ashdod, Israel, a palm-lined, pastel-colored port city that sprawls along the mild shores of the Mediterranean.

More than 20 years have elapsed since the Soviet Union fell apart, prompting a tsunami of people, mostly with Jewish roots, to leave for Israel.

When the Cold War ended, Israel's population was just under 5 million. The Russian speakers who poured in after 1989 added roughly 1 million to that number, and changed the Middle East.

"I think it's an unbelievable phenomenon, by all criteria," says Lily Galili, an Israel journalist who has just co-written a book on the impact on the region of this mass migration from the Soviet Union. "It's like America, United States, absorbing all of France, Belgium and Netherlands."

So large was the influx that the southern coastal city of Ashdod more than doubled in size within a decade, becoming Israel's fifth-largest city, with a population of more than 200,000. 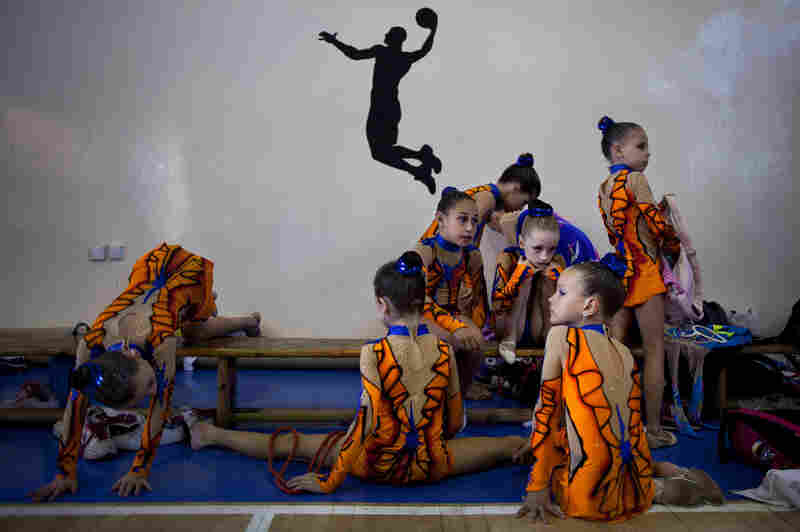 Gymnasts from Russian-speaking immigrant families warm up at a gymnastics competition organized for Israel's immigrant community, in the southern resort city of Eilat. Most of Israel's Olympic gymnasts are immigrants from the former Soviet Union. Oded Balilty/AP hide caption 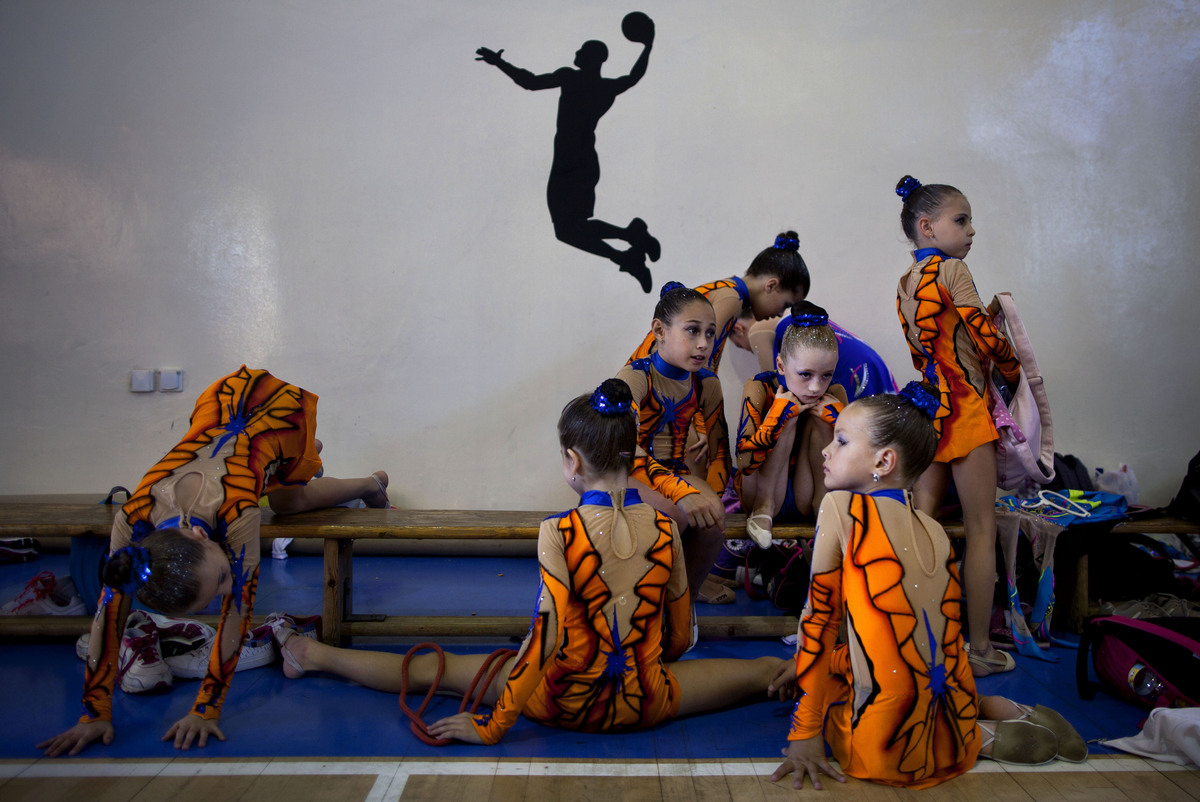 Gymnasts from Russian-speaking immigrant families warm up at a gymnastics competition organized for Israel's immigrant community, in the southern resort city of Eilat. Most of Israel's Olympic gymnasts are immigrants from the former Soviet Union.

Israel now has the world's third-largest Russian-speaking community (outside the former Soviet Union), after the United States and Germany.

Galili says that this flood of new immigrants was enthusiastically welcomed by what she calls Israel's "elite" for many reasons, including the impact they made on the demographic equation between Arabs and Jews.

But she says there was opposition in Israel, from a variety of fronts. This included the minority Israeli Arab population who feared becoming more marginalized. Questions were also raised over whether many of these former Soviet residents were actually Jewish.

Israel's Law of Return allowed the new arrivals to qualify for citizenship if they had one Jewish grandparent. Under rabbinical religious law, Jewishness passes through the maternal line. This defines more than 300,000 of Israel's Russian-speaking immigrants as non-Jews.

Galili says immigrants from the Soviet Union struggled with this: "They come here, and they have a non-Jewish mother and a Jewish father — and suddenly this motherland, who's expecting them to come, says, 'Oh ! I forgot to tell you — you are not Jewish here.' "

There are no civil marriages in Israel. Russian-speaking Israelis defined as non-Jews who wish to marry must go abroad, or convert. Galili says conversion is not a popular option.

"They find it offensive. They feel Jewish. They were raised Jewish. They have Jewish names. They once suffered for being Jewish in the Soviet Union. Now they suffer for being Russians in Israel," she says.

To get a sense of what it was like to transition from the Soviet Union to Israel, you only have to wander through Ashdod — with its beach cafes, boulevards and apricot-colored apartment blocks — and chat with some of the many thousands of Russian-speaking residents.

"In the beginning, of course, the language was a serious problem," says Stanislav Fishbein, a Ukrainian who migrated to Israel 18 years ago, speaking in Hebrew. "In addition to that, we didn't know about the tradition. I didn't know about Judaism and about Hanukkah, for example. But now I do — and I like it." 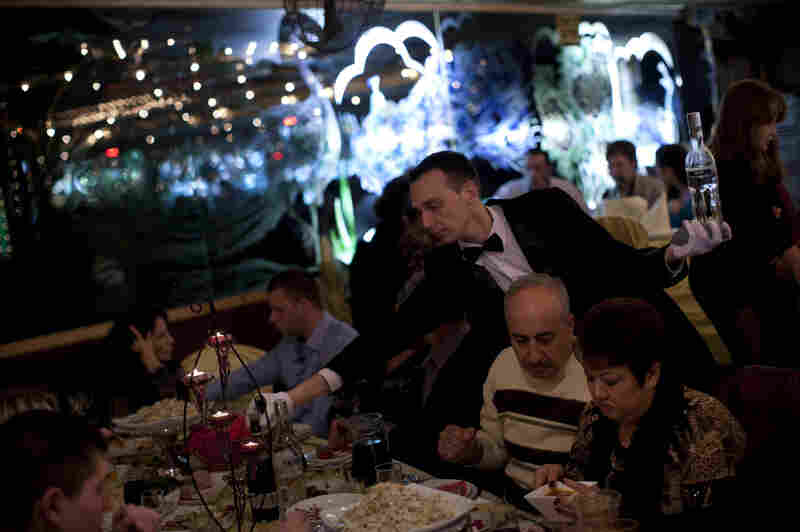 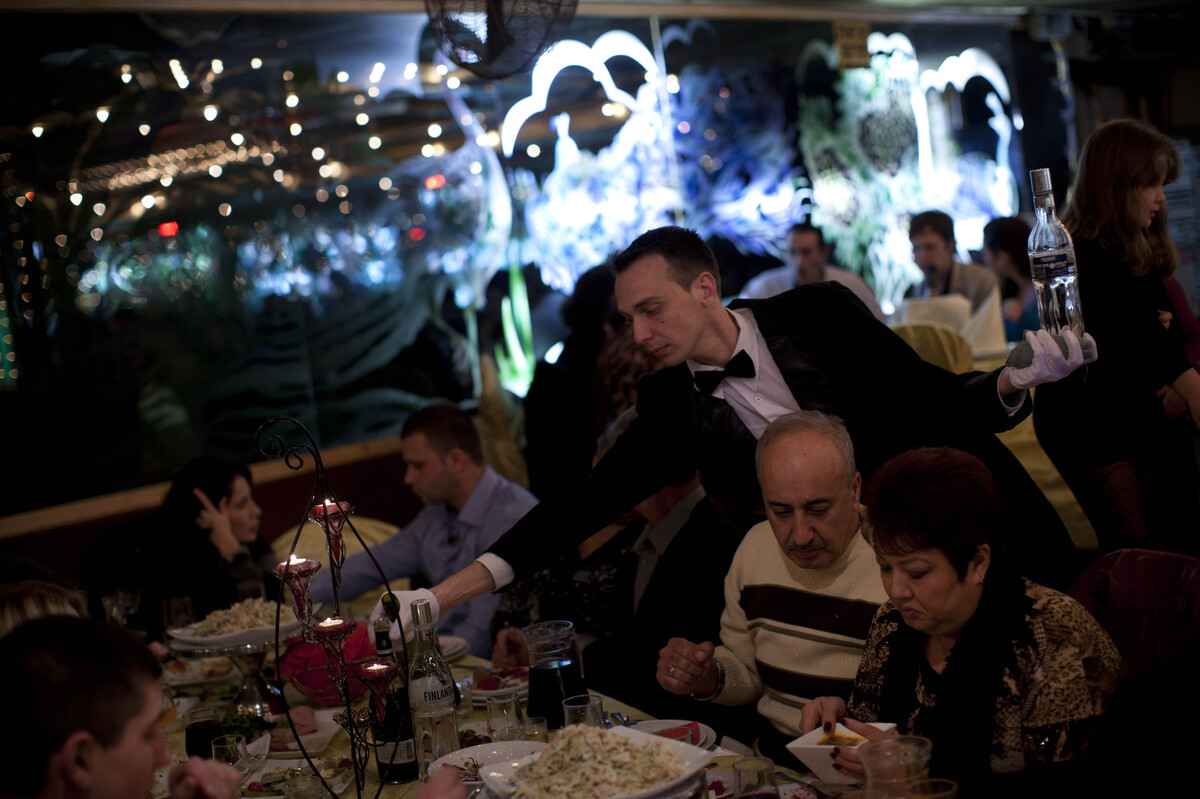 A waiter serves traditional Russian food at a seaside restaurant in Ashdod, a southern Israeli city heavily populated by immigrants from the former Soviet Union.

Fishbein is the ringmaster of a Russian circus that has been touring Israel, in part, he says, to "cheer people up" in the aftermath of the latest eruption of hostilities with Hamas in the Gaza Strip.

In November, Israel's military launched more than a week of missile and artillery strikes against Gaza, saying this was to stop Palestinian militants' firing rockets into Israel. Some of those militant rockets targeted Ashdod.

That outburst of violence was the latest installment in decades of bloodshed that has blighted the Middle East. Yet some Russian-speaking immigrants admit they knew little about the Israeli-Palestinian conflict when they first set foot in Israel.

Standing in an Ashdod bookstore, surrounded by Russian books, Inna Israeli says she came from St. Petersburg in 1990. Back then, she was not sure about the location of Gaza, some 15 miles to the south.

"We didn't know! We didn't think about that," she says.

Dima Esterman, who's sitting in an Ashdod real estate agents' office, says he did know about the conflict when he arrived in the early 1990s but believed it would soon be settled.

"I was [politically] on the left, and I thought it was possible to reach an agreement with the Arabs. But after 20 years, I no longer think an accord is possible," he says.

Most of Israel's Russian-speaking community, including Esterman, is on the right these days. Since they now make up about 15 percent of Israel's 8 million people, they wield considerable political clout and have played a significant role in the general rightward shift of the Israeli electorate.

Russian-speaking immigrants form the base of the influential right-wing nationalist party Yisrael Beiteinu. The party has teamed up with Prime Minister Benjamin Netanyahu's Likud to form a bloc that is leading the polls ahead of this month's elections.

Galili argues that immigrants from the former Soviet Union have made a considerable impact on the politics of the Israeli-Palestinian conflict — not least because of their resistance to the idea of giving up territory.

She attributes this partly to the fact that they came from a vast empire. "They look at the size of this country, and they say, 'What? You want to hand back territory? You must be crazy!' "

One reason Israel's "Russians" fascinate Galili is that their experience chimes with her own story. She moved to Israel from Poland in the 1950s, when she was 8 years old. She recalls how back then, immigrants were dropped in the deep end.

"You had to become an Israeli in a second — language, name, love of the country, the whole package. I had no contact with my culture, not even with my friends," she recalls.

Arrivals from the former Soviet Union have had a different experience. New technology has proved to be a major factor in defining their relationship with "non-Russian" Israelis.

"They come, they have the Internet, they have satellite, they have blogs, they know everything that is going on in Russia," says Galili.

Galili stresses that the immigrants from the Soviet Union are fully integrated into Israeli society and are a big asset to the economy. Yet she also points out that, more than 20 years on, many of them choose to remain culturally separate.

"They meet Israelis, and they mingle with Israelis at workplaces, in the army, at school, at university. But after 7 p.m., there is some separation."

Galili says this is by choice. Members of the Russian-speaking community like to be together and are fiercely proud of their rich Russian language.

"This applies to the younger generation as well, which never ceases to amaze me," she says. "Because even people who are now, let's say 30 [years old], and they have been here for 20 years ... when they go home, most of their friends are still Russian-speaking."

Vladimir Dzyakevich is a biologist, aged 32, and an actor with a Russian theater group based in Ashdod. He agrees that he is culturally conflicted.

"Israel is my home and my only home," he says. "But I feel that as a person, culturally I am torn inside because I feel a very deep connection with the Russian culture and Russian literature."