Accessibility links
'Downton Abbey' Cast: It's More Fun Downstairs NPR's David Greene speaks with some of the cast members of the British TV hit Downton Abbey. The third season premieres in the U.S. Sunday on PBS. 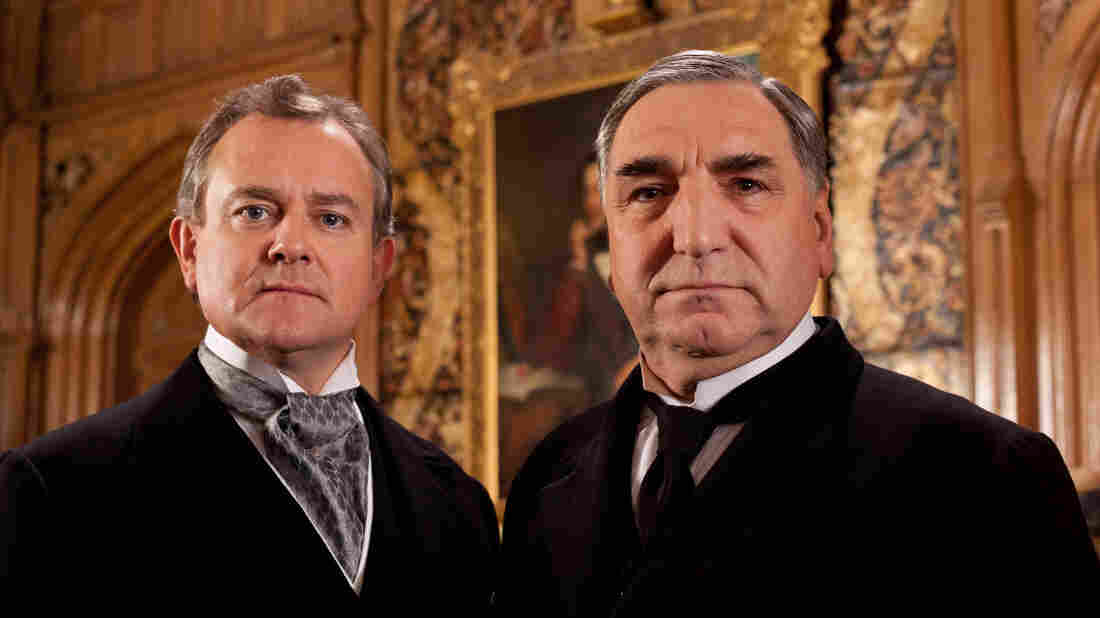 With the third season of the sumptuously upholstered period drama Downton Abbey coming to PBS Masterpiece Classic on Jan. 6, Morning Edition's David Greene sat down with a half-dozen members of the cast to talk about what's in store.

For those who don't know the show, Downton Abbey is a grand English country house, a world choreographed by ritual and rank — where every person knows his place and everything is just so. It's home to an aristocratic British family headed by the Earl of Grantham, Robert Crawley, and his American-born wife, Cora.

But now, in the years after World War I, change is in the wind — rising and falling fortunes, social changes, characters adjusting to new roles both upstairs and down. Actors Hugh Bonneville and Elizabeth McGovern, who play the Granthams, joined cast mates Joanne Froggatt, Sophie McShera, Jim Carter and Rob James-Collier, who all play members of the house's sprawling staff, to talk class, character — and, of course, clothing.

Part 2 of this interview will be broadcast on Morning Edition on Jan. 4.

Elizabeth McGovern on the psychology of a rigid class system 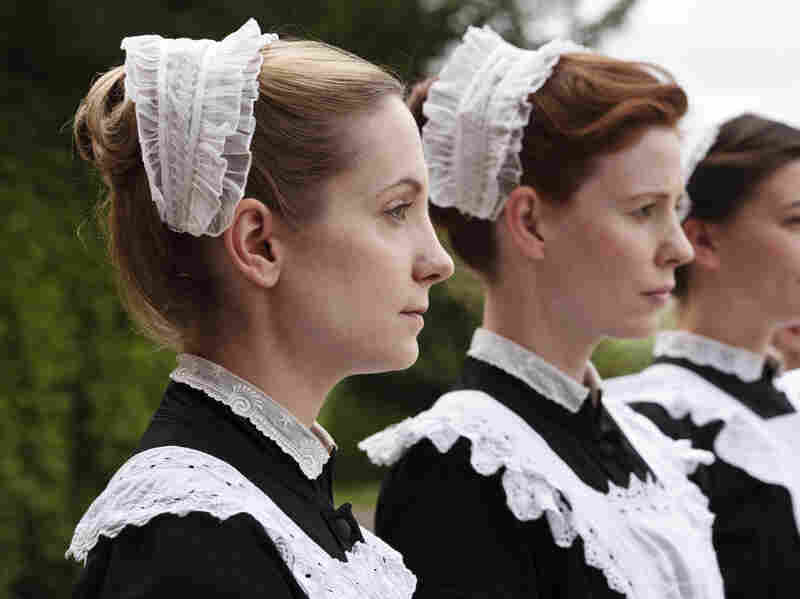 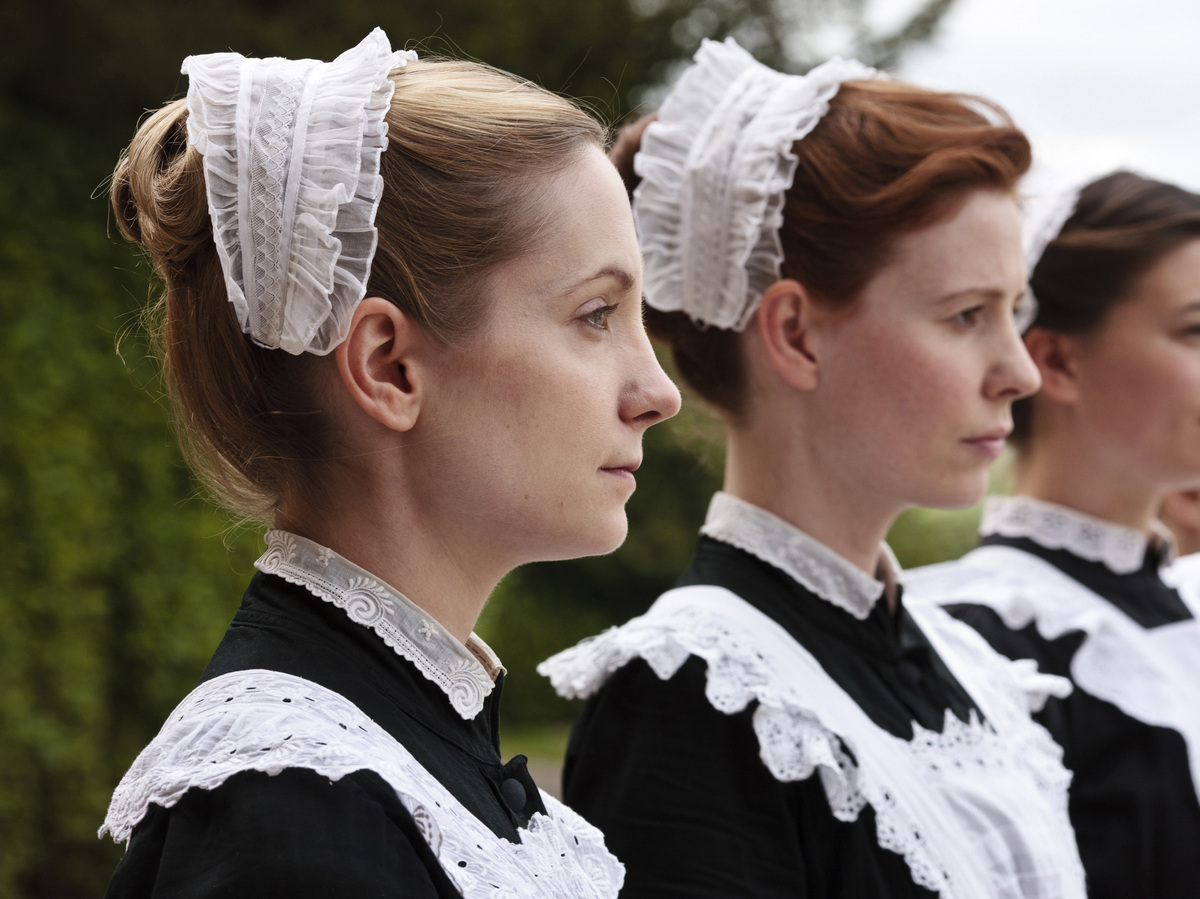 "In today's world, we all live with the burden of feeling that anything is possible if we're only clever enough, smart enough, work hard enough. ... There is a ... disappointment if for whatever reason you haven't managed to earn a fortune or succeed in some huge way that you thought you would as a young person. And there's something, of course, marvelous about that — personally I wouldn't change that for anything; I wouldn't go back to the old way. But I think there was a comfort for people to a certain extent in knowing this is their role, this is their place. There's no pressure about it; you do the most wonderful job you can."

"This was a world before financial advisers; if you had money, it made money — it was as simple as that, in that post-Industrial Revolution era. So this is the big crisis point for Robert and for the estate. But at the same time, he wants things to go back to — to the certainties that there were before the war."

Jim Carter, on Carson the butler's resistance to change

"He's like the fabric of Downton Abbey itself, really. He's unchanging. He thinks happiness is two footmen in the dining room, and women [servants] kept out of the dining room. So like Robert, they see themselves as the guardian of the traditions of the house and the honor of the house. He resists the forces of change. ... I think change is coming, but he can't cope with it very well. ... As Elizabeth was saying earlier, for some people, a static situation is a secure situation. That is his security. ... People like this are fairly institutionalized — as institutionalized as a long-term prisoner. Our lives are dictated by gongs and bells, and the rhythm of the day, [which] is dictated to us by the people upstairs. We live to serve them, and to make their world perfect, and Carson takes immense pride in that. ... And quite a bit of status goes with it, as well, so for a man of presumably fairly low birth, he's attained considerable status. And he'll protect that — and protect the family at the same time."

On the evolving character of Thomas, the malicious footman

Rob James-Collier: "The more I play Thomas, I've started to think about why he is how he is. And I think it's definitely rooted in his sexuality. We must remember this was a time when being [gay] was illegal, and it was also 'against God.' And it was a more Godly time back then. So you have society condemning anything to do with homosexuality, describing it as foul and twisted — and if society's being negative and aggressive toward you, I think it's only human nature to maybe react to that, as a defense mechanism, and be aggressive back toward society."

Joanne Froggatt: "He really explores Thomas' journey ... and you do really feel for him in Season 3. I think it's more explained why he is the way he is."

Quiz: Are You Down With Downton?

Carter on the details of life at Downton

"The art department and the props department do a fantastic job. ... Everything we use is genuine — the food is genuine. The menu is printed out in French, on the table in front of people for a formal dinner. And that's what they eat: mousseline of whatever-it-is."

Carter on Highclere Castle, which stands in for the fictional Downton Abbey

"We've put in the odd chair of our own, where theirs are too delicate. ... But everything is as you see it there. The big painting of a man on a horse at the end of the dining-room table is a genuine Van Dyck. It's the real thing."

On whether the costumes are uncomfortable

Joanne Froggatt: "Very. For the ladies, in Seasons 1 and 2, the corsets were very, very restrictive, very tight. So after 12 hours in one, you were really desperate to get it off and go home and put your jeans on. And I don't know how, as the housemaids, these girls did manual labor in these things. Because you can't bend in them. It's difficult to tie your shoelaces in one."

Carter: "The costumes, whilst they're uncomfortable to wear, they do dictate how you stand, how you behave. You can't slouch; you can't be relaxed in those costumes. And we have to remember at all times it was a very formal era; chair-backs were not for your back to rest on, they were for servants to pull out. You never slumped; you're always at attention."

On whether life is more fun upstairs or downstairs

Bonneville: "No, we have plenty of fun upstairs — Elizabeth, what are you talking about? We get to shoot in a beautiful house, we get to play silly parlor games in between takes, waiting for the cameras to set up. But no, I'm sure there's a lot more banter and bread-roll-throwing in the kitchen."

McGovern: "This is just a rumor I hear."

Carter: "There's a formality to the scenes upstairs, which bleeds into the behavior [between takes]. You're spaced around a dinner table three feet apart, and being obedient English actors, we sit in our places waiting to work. There's not so much hurly-burly upstairs."